Bolts Over Broadway: I Don't Heart New York--I Only Like It As A Friend

I couldn't decide on a title so you get both. You're welcome. And I'm a bit tired, so prepare for some rambling.
photo credit here 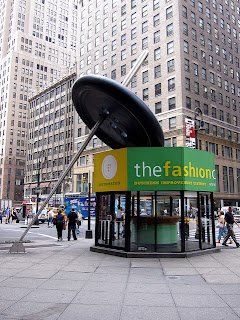 Guess where I went today? New York City's fashion/garment district. The sewing school I used to attend organized a bus trip, and I have heard such wonderful things about it that I decided to go. We hit all of the major hot-spots, I dropped a fair amount of dollars, but I was less than impressed. I can't figure out why... Maybe because the prices were NYC prices and made my eyes boggle a little before tucking things neatly back in place (I'm not used to shopping without coupons or coupon codes). Maybe because I don't have much need for Spandex, and there were four Spandex stores on one block. Probably because I went without a single project idea in my head and simply had no focus. It was all so overwhelming! Floor to ceiling rolls of fabric in every type and color imaginable. Also? It wasn't like New York on TV or in movies--there wasn't any glam or sparkle. It actually reminded me of downtown Philadelphia, and it smelled funny (no offense--Philly smells like that too). The humidity was unbelievable, and the stores had no ventilation, so I wasn't feeling sexy at all. I'm glad I went, but I'm not eager to go back. Unless it's for another one of the sandwiches I had for lunch--deeeeeelish!

NYC blocks are big, and the stores are stacked on each other. It's not the place for leisurely wandering, which is how I like to fabric shop. There weren't many places with bag goodies. There were some really neat o-rings--which would have made the bag unsellable they were so expensive. There were no leather handles or straps or anything I thought I would find. And the fabrics weren't bag fabrics. There were some gorgeous pieces of leather...but I couldn't bring myself to buy them because they were still in the shape of...whatever they used to be. Ewww.

That being said, I spent money. More than I thought I would but nothing crazy. So let's get to da loot!

Our first stop was Mood. Three floors of wow! Things were a bit pricey, but they had every fabric in every color. There were some beautiful houndstooth wools, but I just couldn't justify the cost to myself. OK, I'm thinking of this way too late but I just realized I could have bought a few yards and made a coat that would be cheaper than a store-bought one. Whoops... But I had to buy something--it's Mood!  So I bought these: 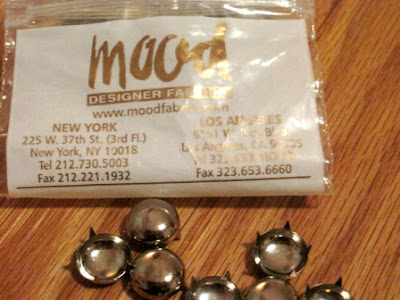 I think they're called nailheads; they might look good as a decorative element on something.

Next we headed to Metro Textile Corp. This was a place that was the size of a large basement with high ceilings packed to the rafters--very claustrophobia-inducing. BUT the deals were incredible. This is actually the only fabric that I bought all day--I bought 3 different kinds of rayon jersey. So incredibly soft! I'm not sure what I'm going to use it for yet, but I couldn't pass on the price. 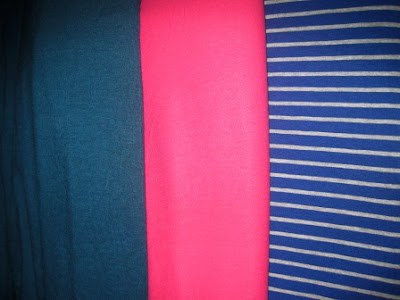 I apologize for the blah photo but these colors are pretty much spot-on. The pink one is actually a little pinker in actuality but you get the idea.

After we went to M and J Trimmings. This is the place where I wish I had remembered I had brought my camera with me. Floor to ceiling trims, ribbons, lace, piping, buttons, Swarovski crystals, beads, appliques, you name it. Everything but fabric. I fell in love with so many things in this store--but so many of them were beyond what I could fathom paying. I did find one piece that I plan on one day attaching to a little girl's dress--once a little girl is available to me to bedeck in my hand-sewn finery. 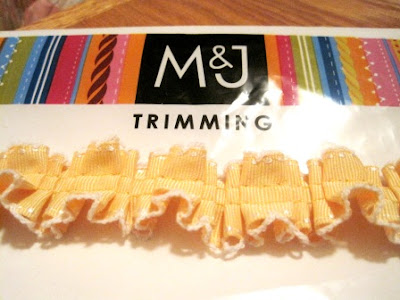 They had this in every color--I had my mitts on red and pink, but went with the yellow instead. Nice and daisy fresh.

Then we went to Sil Thread, which, surprisingly, doesn't major in threads. They have every notion conceivable, and I scored some great tracing paper. I also shamelessly bought a shameful amount of zippers. 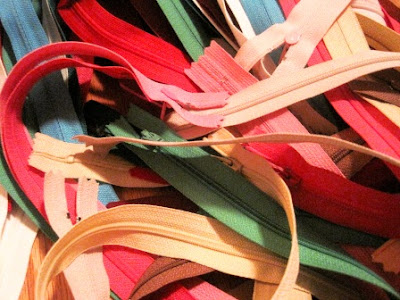 At fifty cents a pop (for a 22 inch zipper!!) I went a little mad for all the colors. They will certainly get used and they're quality zips...I just can't honestly say I needed them.

Then we hit my favorite spot of the day: Pacific Trim. It was filled with the usual: ribbons, trims, unbound shoelaces--which I'm also just realizing I could have used as drawstrings on PJs or something...whoops again. But this was the only place that had bag hardware and handles. Most of the hardware was very basic and things I already have in abundance, so I didn't go too overboard. But I did get some nifty doo-dads: 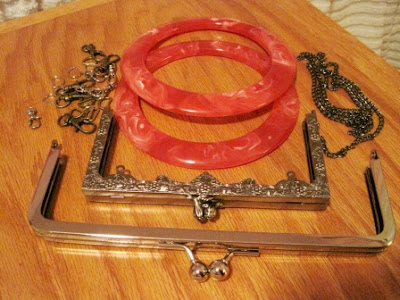 An extra-big purse frame, a screw-in frame, some awesome pinky-red marbleized acrylic handles, and some miscellany (I like that word. Miscellany. Fun). 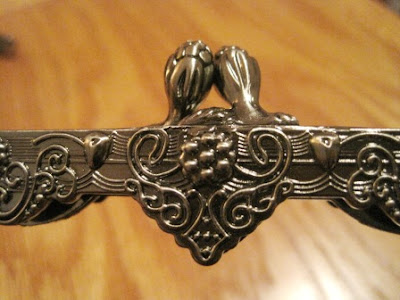 Isn't that detail great? I think I'm keeping this one for myself. I can get several looks from this one--I just have to make a few bags and screw in a new one every now and then. 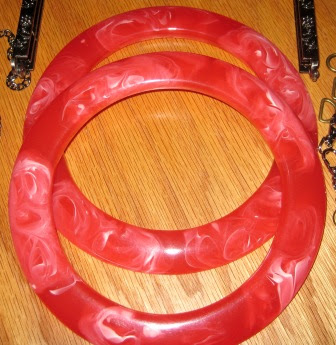 If I'm totally honest here, I must admit that I bought these purely for the color. I don't have a thing they'll go with but I don't care. Love! They had a tan and dark brown set, which would have been infinitely more practical, but much less fun.

So that's that. I wish tomorrow was Saturday so I could sleep in, but Friday is the next best thing, I suppose. Have a good one!

From the convoluted brain of Bethany at 11:04 PM