I decided I am going to name my red and white quilt. I have a nail polish in the most perfect shade of red called 'Cherries in the Snow.' I think that's a swell name but I'm not going to use it because the last thing I need is Revlon suing me for copyright infringement or something because I stole their name (and obviously my quilt is going to be so famous that even the folks at Revlon will know of it). Plus it's too many words to type repeatedly. I think I'm going to go with Cherry Vanilla. So when I refer to it that way in the future you'll know what I'm talking about (I like to state the obvious, in case you haven't noticed).

This week's block was quite possibly the easiest one. It was four simple bowtie quilt blocks stitched together. We did quarter square triangles which were much easier than half squares so they flew by. And I had the reds already sitting in my scrap bag just needing some trimming so I didn't even really have to think very hard. Here she is: 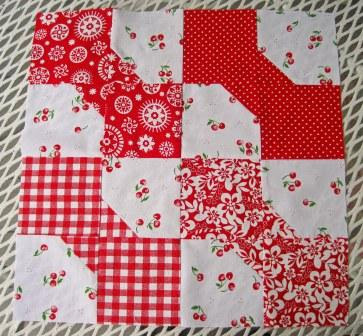 There were several ways to arrange these blocks but I went with this simple one. I'd have thought on it a little more if the whole quilt was this design, but for one block I kept it straightforward where you can still see the bow ties. I hardly had to do any trimming on this one, so yay for paying attention to seam allowances. If you've been here a bit you might remember that I posted a tutorial to make this version of a bowtie block that my grandma taught me: 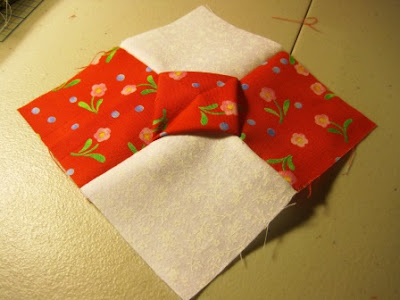 Truth be told I actually like the 3-D version a little bit better - the little poof makes it look like a real bow-tie. I have a ton of these made and the white squares all cut to sew them to. And you wanna know something? I may actually get to it this year. I've been quite industrious this week with the sewing so if I can keep up this pace it'd be awesome.

So that's it for now - I'm going to start rambling if I don't stop now. I can feel it coming on.... I'm hoping to have a tutorial in shape for you for this weekend. Have a happy Friday!
From the convoluted brain of Bethany at 11:46 PM