'Allo! I'm not sure what the deal is with weekends, but I'm pretty sure they have far fewer hours than any two day combo during the week. Anyway.... my big brother is going to get older this week. He told me exactly what he wanted (and I'm kind of surprised he hasn't asked me for it already) but I wanted to make a little something for him as well. He's got a few afghans I've made somewhere in his house, but that's about it. It's really hard to think of gifts for guys that aren't tools, or electronic...thingies, or clothes. Which is why I'm really glad Megan, The Crafty CPA, did my thinking for me. The second I saw these paint sample and tile coasters posted on her blog I knew exactly what I was going to make (and I knew even more when I stopped by his house last week for Grandma's sewing box and saw the glass rings on his end tables).


I ran into Home Depot after work one night - girls in office get-ups must be very rare there, because people kept asking if I needed help (they never ask this when I'm there in jeans and a tee--not that I go to the Depot often, mind you). Some of the employees kept trying to explain the differences and the benefits of one tile over another, and were really kind of bugging me, but I didn't want to tell them it was for a craft and get the "you have three heads" look again. So I grabbed the manly colors, breezed through the paint section and grabbed some coordinating paint chips, and checked out. My total cost (including the adhesive felt for the bottoms so as not to scratch the table) was about $3.00 (as I already had the Mod Podge). Can't beat that! 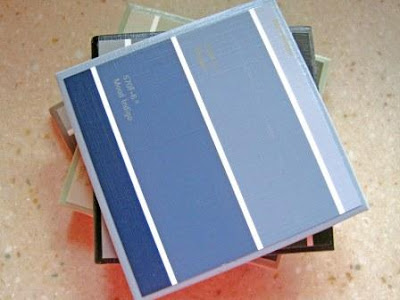 Here's all of the colors I made (there's a blue, a green, a brown, and a black--I know you know your colors, but I take such bad photos it's not always obvious): 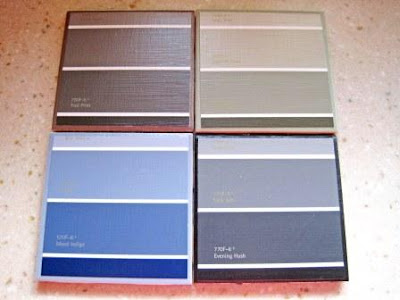 I followed Megan's tutorial pretty much to the letter (minus the acrylic spary at the end), and I LOVE the way they turned out. His living room is made of greens and blues and darker colors and sharp angles, so these are going to look perfect. The only thing I did differently was to cut the paint samples smaller than the tiles all around so I wouldn't have to deal with the beveled edges some of them had (thing I learned too late: there are two types of tiles--beveled or non-beveled).

I used one of those sponge on a stick things to apply the Mod Podge. This gave them a bit of a brush stroke look, which makes the paint chips seem painted themselves, a nifty unplanned side effect. The one question I kept getting was "Why did you leave the words on?" Uggghhhhh and grrrrrrrrr....so you could tell they were paint samples, sillies! 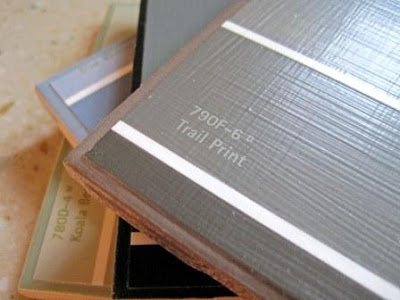 I super love this idea. I remembered something like this from Girl Scouts - we were given a white tile, old Christmas cards, and glitter and glue and told to make Christmas ornaments. I was at the end of the choose-your-image line, so mine was an ugly orange snowman graphic. But wouldn't these make a neat Christmas gift? You've probably got old cards laying around, and the white tiles were fifteen cents (!!!) apiece. For a couple bucks and mostly drying time you can knock out a few hostess gifts, or teacher gifts. I need to go add this to my to-do list....

I had a great idea to wrap them in brown paper and twine (this seemed a very guyish idea), but I couldn't find the twine. I had bought a roll of yellow duct tape (for absolutely no good reason) a few weeks ago so I decided to improvise. I unrolled a loooooooong piece of tape, and folded the long edges in towards the center, kind of like making bias tape. I folded it in half again (of course this way didn't stick) and then tied a bow around the package: 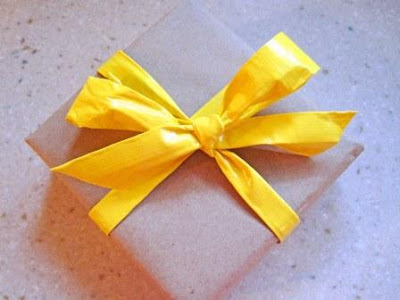 I think that's my favorite part. Here's one final action shot for you: 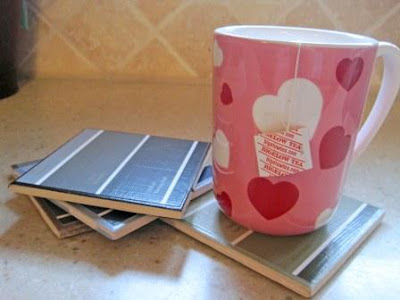 I didn't have anything manlier than this other than a wine cooler or a "Guess what? Chicken butt!" coffee mug, so you'll just have to imagine. But it looks kind of stinkin' cute on there, doesn't it?

It's past my bedtime, so I'll see you soon, my loves!

I'm linking up here this week (even though Megan already did to most of them--people should know when an idea is good enough to be admittedly stolen):

From the convoluted brain of Bethany at 12:19 AM