I had this quilt block finished almost instantly, but I kept forgetting to take pictures of it. This particular block is called "Breaking Out" and is made up almost entirely of flying geese units. The method used this week had me completely clueless as to how it was going to work out, but lo and behold it did! And it was pretty nifty. I like when I don't see where something is going until I'm finished with it. 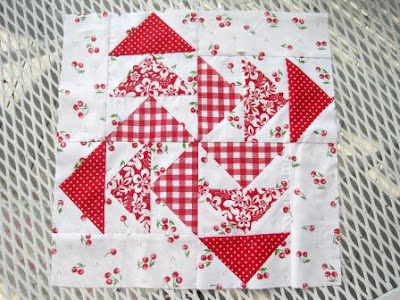 I had a bit of an off-day when I was piecing this (at least that's my excuse). I don't know what I was thinking with seam allowances, and then I hacked off way too much on a few so that I had to remake them as there was no way I could smoosh them in to fit. I'm about a quarter inch short in each direction - any more and I'd unpick and resew or start over. I do like this block and its construction was pretty simple. I like how the red checks around the center are a bit pinwheelish. That and the red polka dots makes the red floral look a little lost and washed out, though. I never realized before that there was so much to consider with color value and placement and the different effects of light and dark. 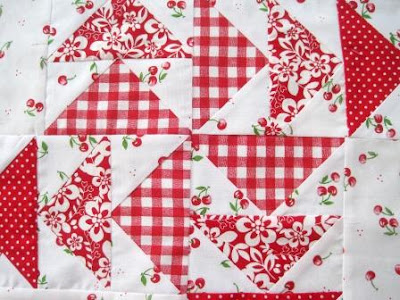 In other news on the homefront - y'know what else is red and white? Me. The white is my pale skin. The red is the poison ivy I somehow have without even coming into contact with nature. It's in such odd places - in my left eyebrow, on my left nostril, on the back of my left ear, my stomach, my upper right arm, and a few other places. It's definitely poison ivy (my parents just had it massively a few weeks ago from doing yard work so diagnosis was easy), but I have no idea where it came from. Thankfully it's not too itchy. But it is quite the mystery.

And now, something to amuse you (unless you're amused by my itchy blotchiness, in which case here's aNOTHer thing to amuse you). My dog Charlie is white. He likes to roll around in the grass, so eventually he turns tan/gray and then gets a bath and is sparkly again. What he's gotten good at recently is getting two baths in one day. He gets his usual, is all fluffy and adorable, and then goes outside. He lays on the porch looking so forlorn (he hates baths) and a few minutes later he's scratching to get in. In that brief window of time he not only manages to find the dirtiest patch of dirt and mud (it's been very rainy this August), but also rolls around in it, covering himself in dirt, grass, tree pieces, and whatever else sticks to him. The other day this was the result when he came in: 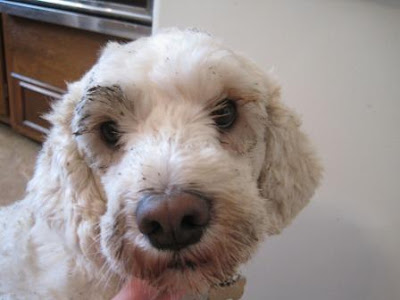 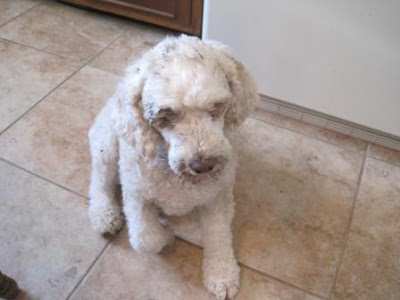 I don't have a picture of his back, but it's pure dirt. This is actually mild compared to what he did a Sunday or two ago. As soon as he heard the water running in the basement he tried to make himself inaccessible under the kitchen table - he's not very wily or good at hiding.... 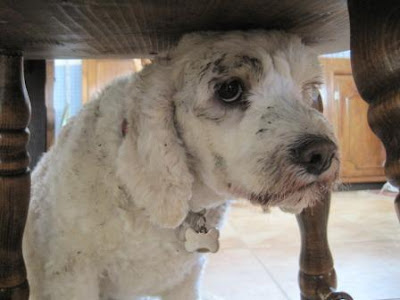 Somehow he doesn't get his chest dirty - just his back and his head. At Christmas he was running along the fence with the dogs next door and came back in looking like he had on black stockings his feet were so muddy. He ONLY does this after his bath. When he's in his normal state of being he doesn't go out and filth up. Only after he's been scrubbed clean. It's like revenge but he doesn't realize it just leads to another bath. He's lucky he's cute.

So that's that. Very exciting, I know. Are you ready for the hurricane if you're an Easterner? First an earthquake, now a hurricane. It's a big week for weather...fun. But I like rainy days - no better day to sew in my opinion. Happy Friday!
From the convoluted brain of Bethany at 10:45 PM