What a delightful weekend! The sun was shining. I got a lot done. My mother looooooves the gift we all gave her for Mother's Day (happy Mother's Day to all of you, by the way!!). And I don't feel that "Ugh, Monday" feeling coming on like I usually do around this time Sunday night.

For a few months now half of my project box has been dominated by yards and yards of outdoor fabric, just waiting to be made into new cushion covers. My mother kept saying "Don't make yourself crazy, whenever you get to it is fine." And she means it, but I make myself feel guilty that my mother, who asks for nothing and does anything for anyone, has been back-burnered. So last weekend I made new cushion covers for this wicker sofa on the porch that she scored for $20 at a thrift shop. And this weekend I stitched up a new cover for the swing cushion, plus a few other bits. It feels so good to have so much done!

Normally the porch is done in bright springy colors--pinks, yellows, greens and the like. But this year my mother went with something a bit warmer--reds and oranges and yellows and greens at just the right level of brightness. I love how it all came together in the end after a weekend of cleaning, sewing, and rearranging.

First up is the wicker couch--here's a shot of the old covers (I don't have a full before--plus you get to see my favorite shoes again :) 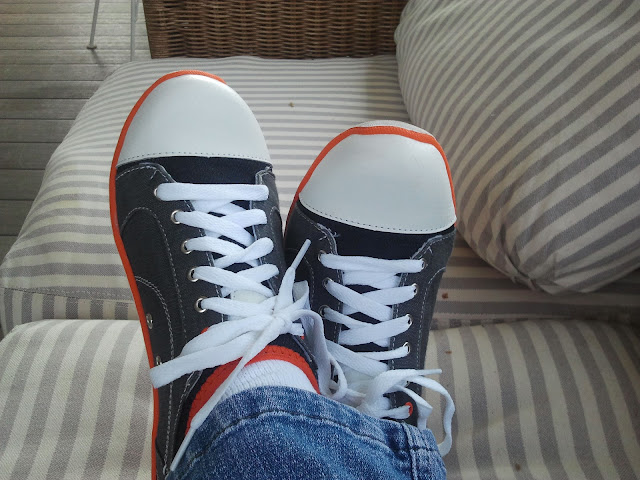 And now here's the after: 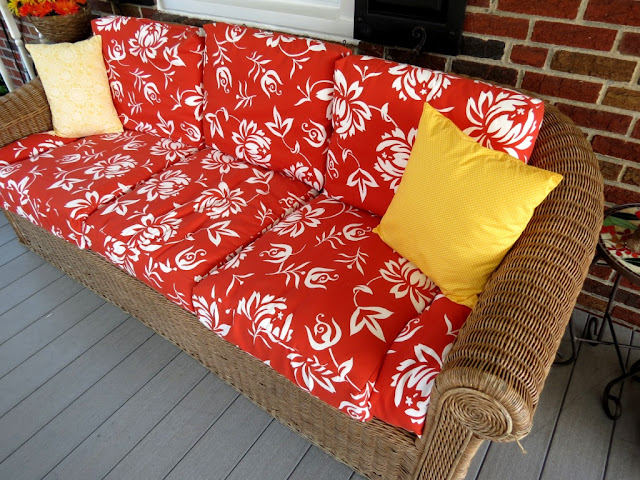 The yellow pillow covers were made from left-overs. Alicia promptly curled up and plunked her face on one for a nap so I'm guessing they're fine :) After carefully measuring several times, the covers for the seat cushions came out just right. But we then realized that there were large gaps on either side and that these might not have been the original cushions for this piece. Turning the cushions left a large gap in the front that looked worse, so I stitched up a few bolsters to shove in the gaps on the sides. They're squishy as they're stuffed with fiber-fill, but nobody will be sitting directly on these so they're just fine for filling in the weird gap, and visually they blend in.

They all zip on and off so they can be easily washed or replaced. For the seat cushions I stitched the zippers to pieces as I would a change purse, and then trimmed them to match the width of the gusset. I then added some large fabric tabs for a little extra length. 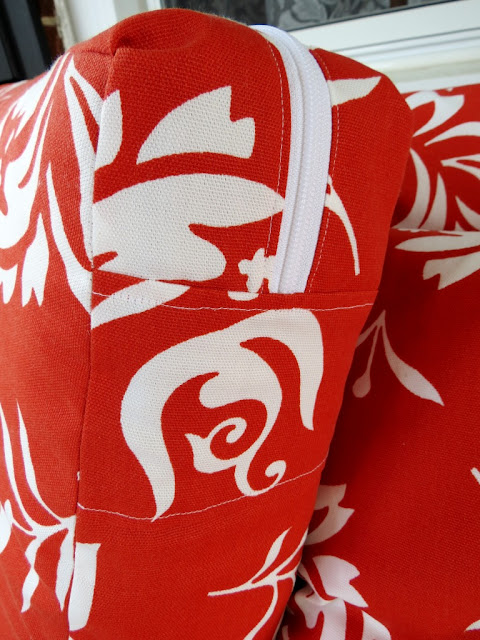 The gussets made me say bad words as they're not my favorite thing to do, but they worked out. The corners tried to sass me, but I made a cute little pleat in each corner so that extra little bit of fabric in the corner wouldn't look funny. 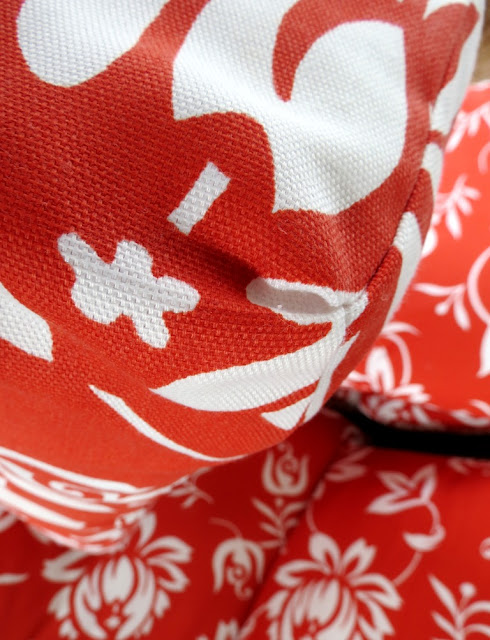 For the back cushions (I almost had fun with these :) I sewed big rectangles and boxed the corners, just as I would for a tote bag. I've never boxed the corners where the zippers are, but they were easy-breezy. I've tried to do it on something like a change purse, but there was a lot of bulk and it wasn't a big enough "box" to work properly. 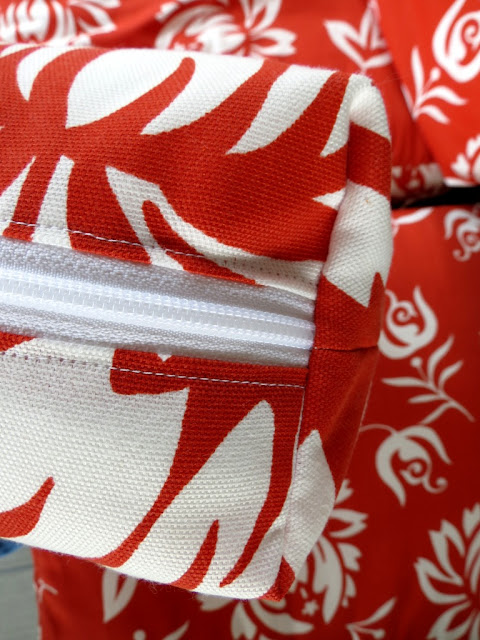 I was quite proud of myself for these as I've never done something like this before. Now, I have recovered the porch swing cushion a few times. The first time was the best I could do as I had only been sewing for a few months. The second one is what you see in the background of this shot, but much much much more faded: 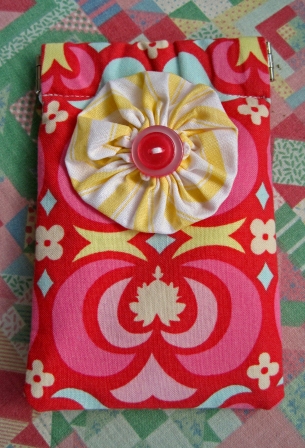 And here's what it is now: 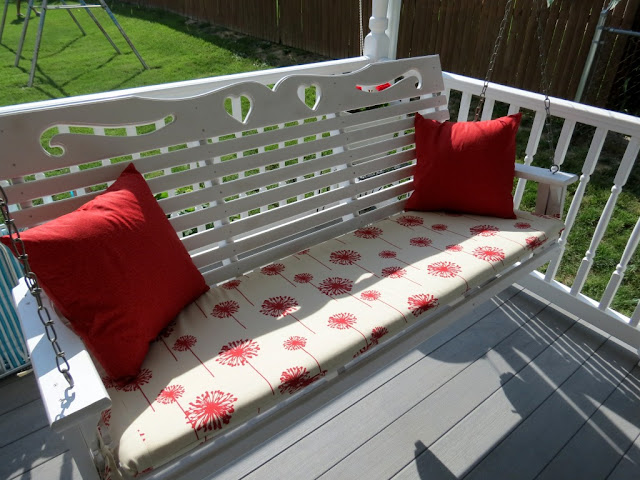 There were several colors to choose from in the dandelion fabric, but this was the favorite. If it was quilt-weight instead of home dec I may have splurged and bought some of each. I have just enough left over to whip up a simple tote. I put the zipper in this one the way I would a visible zipper in a skirt--I sewed the seam but with big stitches where the zip would go, laid it face down, and stitched the tape down. I opened up the stitches and there was the zipper, nice and tidy. I think I lost about 7 pounds trying to get the cushion back into the cover, though. I felt like I was wrestling an alligator, but without anything sharp, or snarling, or biting. The pillows are simple envelope-style covers over pillow forms (easy to remove for washing).

The final thing was a mother-daughter staple gun smack-down sort of affair. We have four chairs with metal frames and detachable cushions. The cushions are covered in boring old vinyl (but they're so sturdy we leave that on and cover them in new fabric every few years). We had to remove the cushions and pull out all the staples tacking down the old fabric and the backing. Then we cut and stapled the new fabric to the cushions. Well....I pulled the fabric nice and tight and my mom stapled because I'm afraid of the staple gun. I know, it's weird, but when I try to use it I squeeze my eyes and turn my head and get someone else to do it. We're old pros at this routine, so they took hardly any time at all. 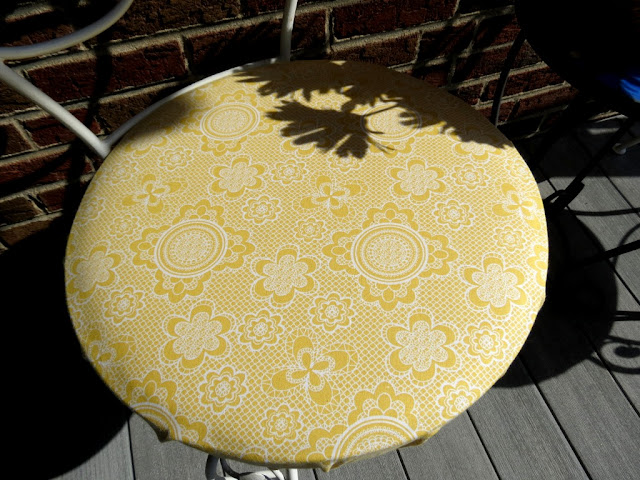 Our porch is pretty big, and we have plenty of places to sit, so there were 2 chairs left. Alicia grabbed a few limey-green cushions at Target for those, and they just pulled everything together (no pics of those, but there will be at some point). It was a joy to sit outside this evening and see all the bright colors and the fresh new fabrics. 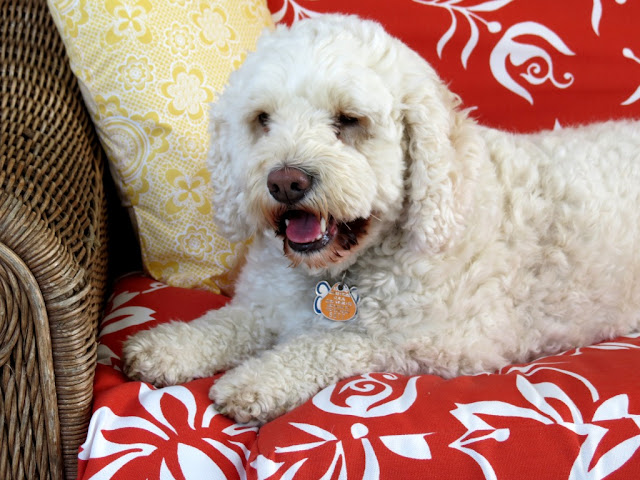 Oooooooo, I just LOVE a feeling of accomplishment!