When we were down the shore in August we were in this cute little boutiquey shop that sold all kinds of handmade goodies. There was a handbag there that my sister admired. She didn't want to drop the dough on it (her shopping list now includes diapers and formula, which don't come cheap) so she said, and I quote word for word here, "I'm just going to let Bethany make it for me." Reread that. She's going to let me make it. Ummmm....ok. My other sister is going to let me make her a leather bag once I educate myself and assess my sewing machine for leather-working capabilities.

I took my time with this one. As I finished a part of it I walked away and came back to it. I tend to marathon-sew, which lends itself to tiredness and frustration (and mistakes). It took me four evenings to make this, but only because I was figuring things out as I went. If I made it again it would take two evenings, max. Wanna see it? 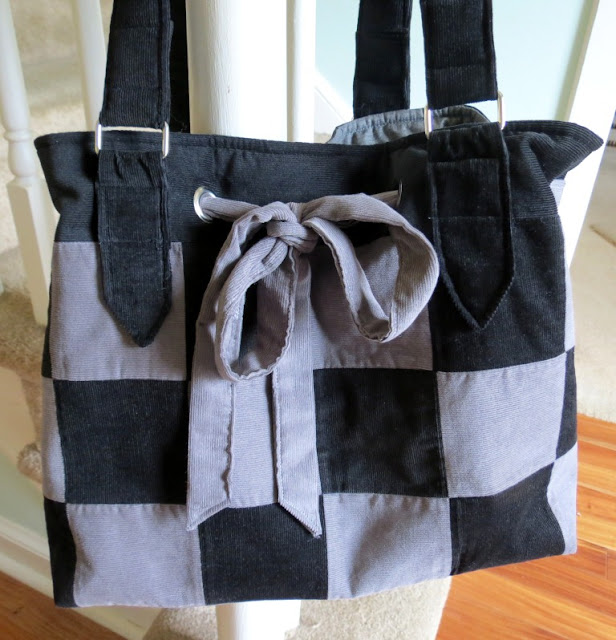 The version she saw was made of a burlap type of fabric, but way too tightly woven to be burlap. I could find nothing similar, but there aren't many fabrics that are more fall/winter than corduroy. So I went with a fine-wale corduroy that felt almost as light as quilting cotton. 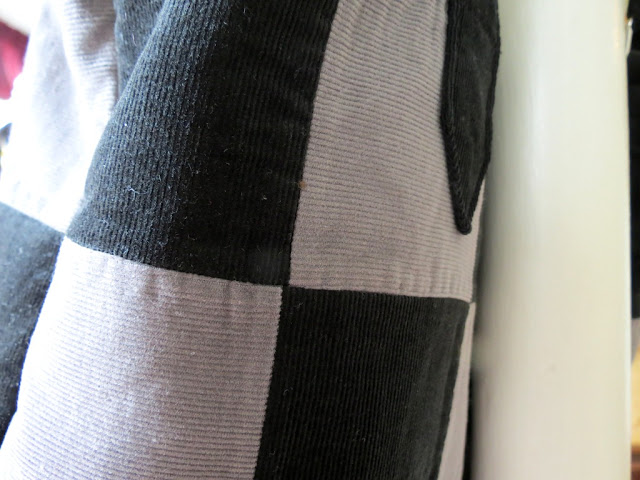 I varied the direction of the wales to give it some textural interest...or something. I took my time and was super precise with the patchwork bits so that all the squares were even and neat. I didn't want there to be a bunch of seams on the bottom, but I also wasn't in the mood to do an inset bottom, so I sewed a few strips of gray to the bottom, and did the squished triangle method of creating a flat bottom. Wow, I just used the word 'bottom' four times in one sentence. 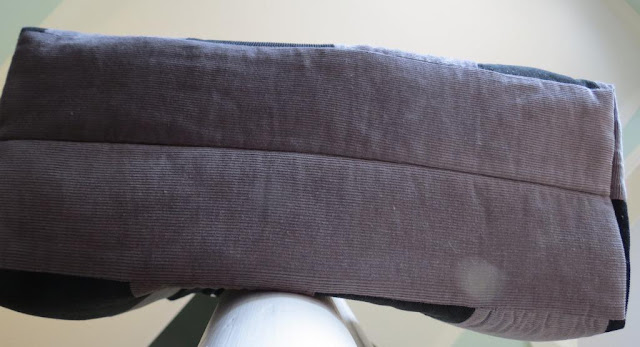 I made a sample corner on some scraps to make sure my measurements were correct. I tend to overthink and then "correct" something that was just right. It came out just the way I wanted it to. There's a piece of plastic in the bottom (I use plastic canvas cut to size) to keep everything from sagging. The version she saw in the shop didn't have the black band around the top, but I like the contrast it gives. I also didn't want there to be stress on a bunch of seams if it was patchwork all the way up with the drawstring running over them. I've never sewn a strap tab onto the side of a bag like this, so that was a first. A very fiddly first since I did them a step or two later than I normally would have. 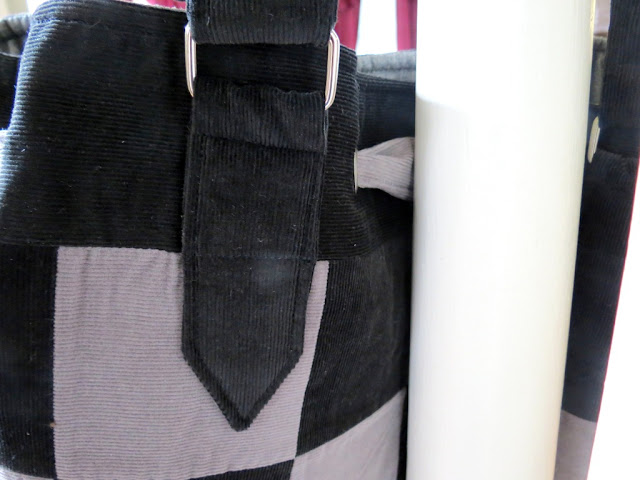 There's not a spot on the fabric up there, even though it looks like it. Just needed to put that out there. I found a great gray fabric for the lining at Joann's--not really a solid, but not a print. Just enough something to it to give it a little oomph. The inside has the usual--slip pockets on one side, and zip pockets on the other. It may be my finest zip pocket ever. 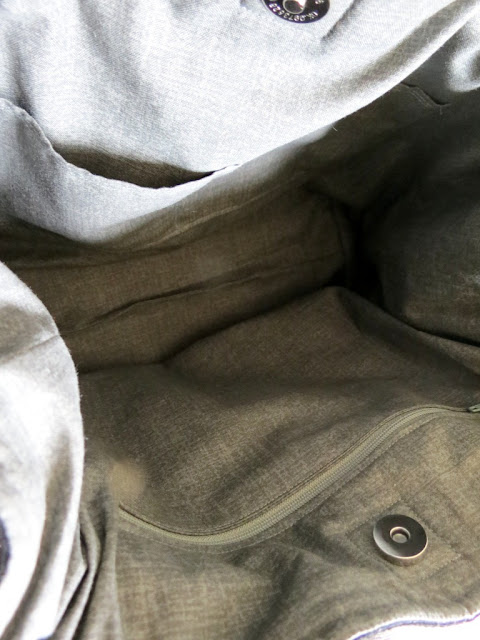 I was also going to do a zipper closure but once the drawstring was cinched I didn't know if one would be interfering with the other. So I went with a mag snap. Sometimes they aren't desirable (though oh-so-simple), especially if a bag is kind of shallow. This bag was perfect for it. 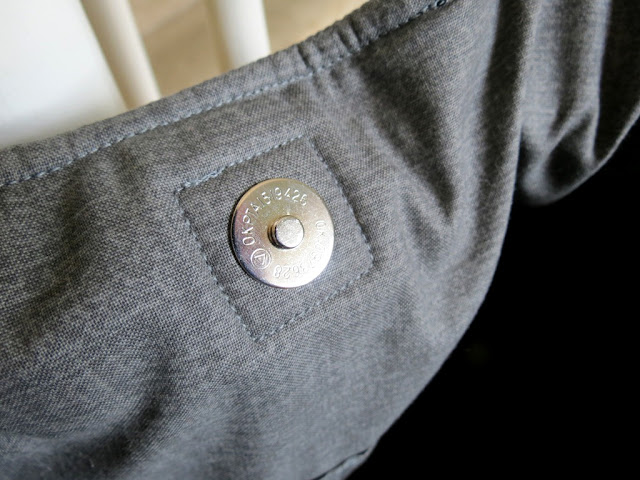 There are a gazillion and seven tutorials (give or take) on how to insert magnetic snaps, and the packages usually come with directions. When I do mine I fuse a small square of fleece to the wrong side of the lining where the snap will go. Once inserted, I don't spread the prongs in different directions. I squeeze them towards each other over the back of the snap. To get an extra bit of pinch I use pliers and protect the snap surface with a fleece scrap. I then place another square of fleece over the back of the snap, and sloooooowly stitch a square around the snap (see just above), and then trim any excess. To my mind this makes it a bit more secure. I once had a snap come out of a bag I had made for someone (talk about horrified!) and started doing them this way. I haven't had any issues since (and maybe I wouldn't have anyway), but at the very least the weight of the bag isn't directly on the snap but on the stitching.

It's funny--I put this off and put this off...and put this off. I was nervous about replicating something, even though it's basically a boxy patchwork bag with a flat bottom and some hardware. I certainly didn't want to rip a bunch of stitches out of anything--have you ever tried to rip stitches out of corduroy? Not even a little fun. But I couldn't be more pleased with this. While it's interfaced and sturdy, it's not stiff and structured. The fabric is soft and warm looking, and while it is a pretty basic bag, the hardware steps it up a little bit.

Want to see the original that caught her eye? My version is a little taller, but all in all I don't think I did too bad. 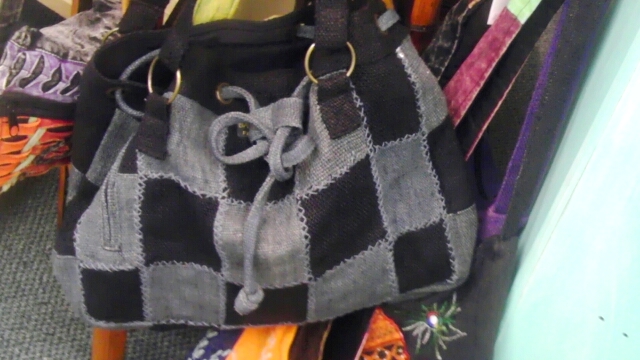 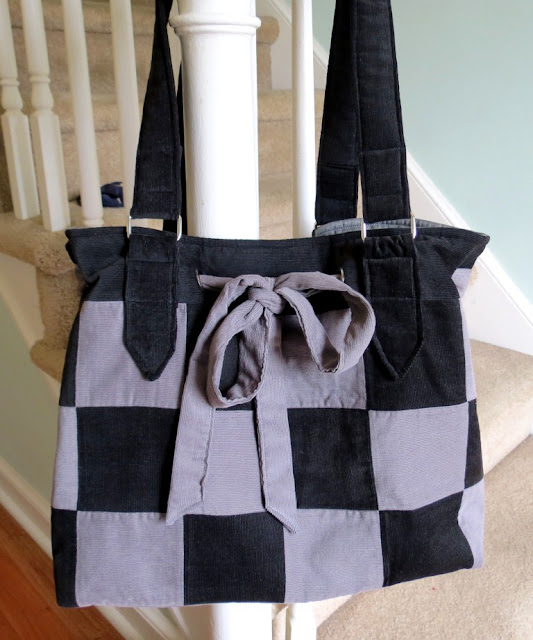 What do you think??? Pure honesty is A-OK and preferable to the alternative, which will give me a false sense of awesomeness :)