Ahoy ahoy! Did you know that 'ahoy' was the recommended way to answer the telephone when it was first invented? Saw it first on The Simpsons, saw it again on The Big Bang Theory,  so you know it's spot-on accurate. Anyway, I decided to make myself a bag for the winter. I have one that I've used for a few years now (and still receive compliments on), but it's more fall-inspired and I wanted something new. I butted in front of my sister on the to-do list figuring that if I left myself until last it'd never get done, but if I put her last I sure wouldn't let her down. I should have not done that, as I think karma was wagging its little finger at me going "Tsk, tsk, selfish selfish!"

Honestly? I don't know when I've ever had so much trouble making a bag before, especially a bag I've made more times than I can count. It was kind of embarrassing. It's almost as though it did not want to be brought into existence, and was fighting tooth and nail to stay folded in its plastic bin instead of being cut and stitched. Shall we review the issues? Let's!

Before I even touch on the stitch issues, let me just say that I sat to sew and was out of brown thread. This is maybe the third project I have not had thread for. I've apparently reversed my former ways--instead of having seven of a weird color for no apparent reason I am down to a bobbin's worth of some. What is that? I'm just going to revert to my old ways and buy too much thread. It's better than speeding off to the shop in a tizzy and starting a project already annoyed. OK, onward.

First, the bag was supposed to be plaid. I agonized for about an hour over the brushed cotton that I thought would be just right--not too flannel shirty, not too...flannel shirty. That was pretty much the only requirement. I found one that was brown, cream, and just enough pink to have some color to it without it being dominant. The bag ended up being decidedly NOT plaid as the fabric was woven crooked. At first I thought it was because I had a headache when I was cutting out the pieces, but nope, crooked fabric. I tried to make it work, because I'm overly optimistic about my skills to make crooked things look straight, but nah. So it ended up being houndstooth. Which I still insist on calling herringbone. 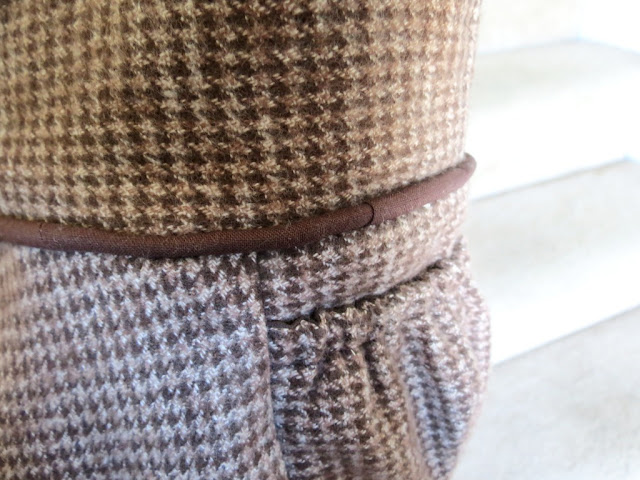 I had just the right amount of this and the brown in my stash to make this bag. Those side elastic-top pockets? Had to redo those about three times. What I thought was a notch in the pattern piece wasn't, it was just a nick in the paper. Then I measured from the incorrect notch. Then I measured incorrectly again. It was at that point I started truly cursing the bag. It was really bad. I should be ashamed of the things I said. I didn't have enough to cut the piping fabric on the bias, so that didn't want to cooperate either. It was only twice that part had to be done. At this point I think I uttered "If you don't start following directions you will never be seen. Never." I think it laughed at me.

Thank heavens for the lining. The inside of the bag is so me, and such a fun surprise when you unzip the top. The zipper pocket was sewn to the wrong side initially--glad I didn't cut the slit where the zipper goes. If I had done that, I seriously would have trashed the whole thing from frustration. Who, me have a temper? No way. But the inside is so worth it. 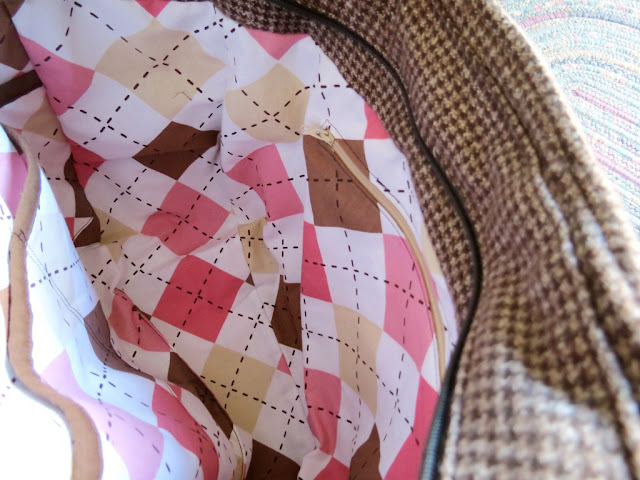 This is a huge bag, but I tend to cram so much stuff into mine that it'll be nice to not walk around with something completely overstuffed with junk. The outside pockets will be great for phone and keys, and the inside pockets for whatever else. The outside of the bag is actually kind of plain: 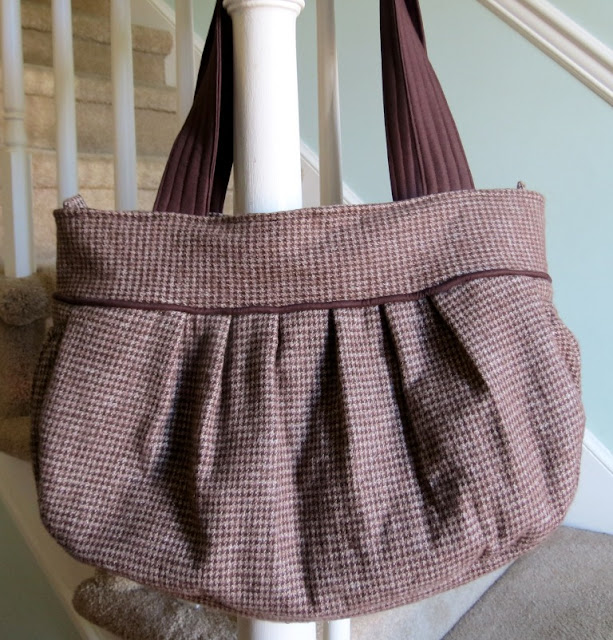 It's a great example of why I shouldn't sew when I have a bit of a migraine. I would normally not  have chosen a small-scale print like this for such a large bag (I am quite pleased with the contrasting handles though). I have been online and in the shops much more than could possibly be healthy, and I have not seen a single fabric that stands out and says "Oh yes, I AM the one." Oddly, though I say this bag looks bland, my bag last winter was bland too. It was one of those brown shearling bags with what looks like wool poking out of the seams. This one needed SOMEthing extra, so I found this pin in my stash of stuff, and it gives it just enough color now to break things up. 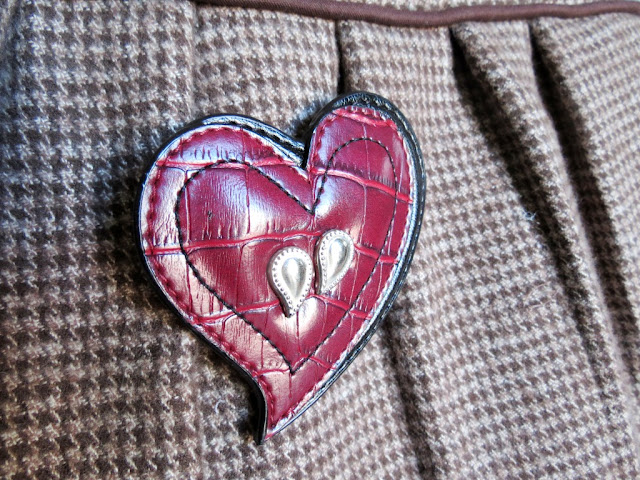 I left it hanging in the dining room so I could see it with fresh eyes in the morning. It looks much better with a pop of color. I was thinking a red crochet rosette would look good, but then thought it might look too fallish. I'm not fully in the mindset of warm wooly-looking tweed-like fabrics so I think I will appreciate this much more when the weather turns cold.

With all the frustration it ended up being worth it, but I need to put it away and forget about it until I'm ready to use it. It's like I have handbag cabin fever. I'll love it. But after it gets away from me for a few minutes. I wonder if that's why when I make a bag for me it has to be a quickie...maybe I'll get so tired of it before it's done I won't want to use it... Hmmm..... something to ponder.

On the other hand--I have figured out exactly what I'm doing for my sissie's bag--corduroy patchwork and grommets. I hope the stitchery gods take pity on me and make it easy breezy. Everyone cross their fingers!

From the convoluted brain of Bethany at 11:12 AM