I've finished my blocks for my hexie project, but put it away for the time being. It can be quite murderous to the finger tips as well as the knuckles--I tend to marathon sew and my hands would actually be a little sore after a session. I love doing hand-work of any kind in the cooler months, so I plan on picking this back up in the near future. I just needed a change of pace, too. When I walked up to Lola to sew the other night, I was honestly surprised she didn't start screaming "Stranger danger! Stranger danger!" It's been THAT long since I've spent any time with her.

Since the fabric I ordered for a new handbag hasn't arrived yet, I decided to dig into some of the fall projects I've had tucked away in my brain. First up was a table runner. I guess it's actually a windowsill runner since it's going in the big bay window in the kitchen, but they've got the same job no matter where they are. Several weeks ago my mother and I were in Joann's where they had the fall/Halloween (and Christmas!!) fabrics out. They had a really pretty, very simple fall fabric tucked in amidst the oranges and blacks and browns that dominated the aisle: 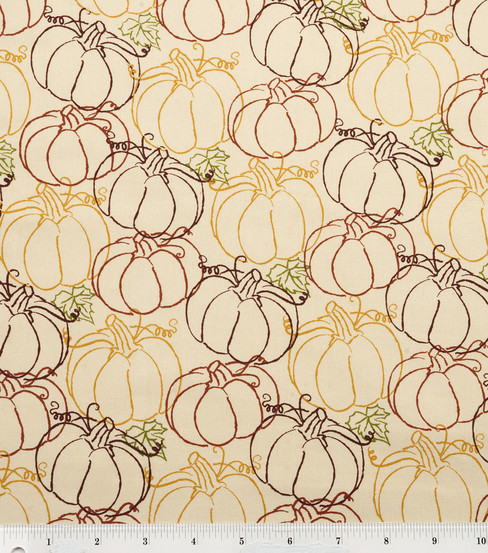 It's called 'Doodle Pumpkins' and is so very perfect in its color and simplicity.

I yanked it off the shelf immediately, and my mother said "Why don't you wait? It might be on sale." I always have coupons so I don't pay attention to sales all the time, plus I just knew I would never see this fabric there again (and I haven't since). I decided it was just too pretty to hack up for patchwork so I made what I call a cheater quilt, but which I've come to learn is a whole cloth quilt.

This is an awful picture that makes it look crooked, but I assure you it's the straightest quilted project I've ever made. I must have needed more coffee when I was taking this photo. I kept the quilting simple with a crosshatch diamond pattern. The thread matches really well so the fabric is what you see as opposed to the quilting. 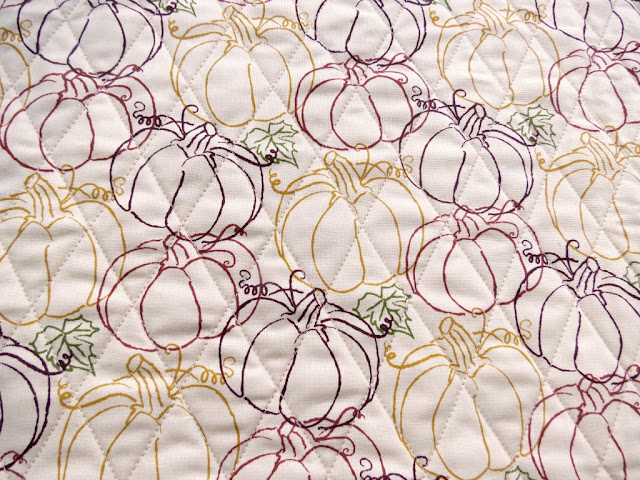 I had a bit of a thread emergency with this one, if such a thing exists where one is not being deprived of life by a spool of string. I decided to start this on a whim, so having a thread that matches (and enough of that thread) never crossed my mind. I had a perfect match but the amount was questionable. I decided I definitely had enough and didn't need to run out for more, so I started. Of course I didn't have enough, so I ran into the other room and frantically asked "Do I have enough time to get to Joann's before it closes?" to which Alicia responded "Only if you stop talking and leave." I zoomed up and back and finished the quilting that night. Of course I lingered and shopped because it takes what? Two seconds to locate your thread number? Yesterday in a more local craft store I saw they had the exact color I needed, but I couldn't chance wasted time on a limited thread selection when I was on a quilting mission.

For the back I used some green I had in my stash (that shows the quilting really well) and for the binding I used a wine-colored solid that matches the front but not the back but it's not reversible so who cares? 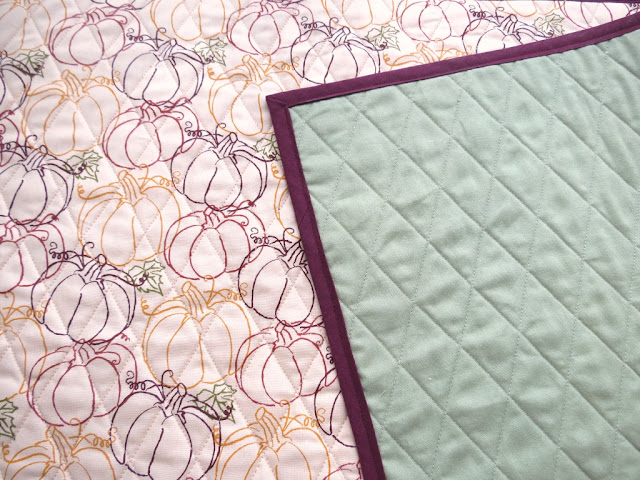 I'm pretty pleased with the binding--it's one thing I meticulously focus on as I'd love to get a near-perfect finish each time. I'm still not there, but I get closer each time. 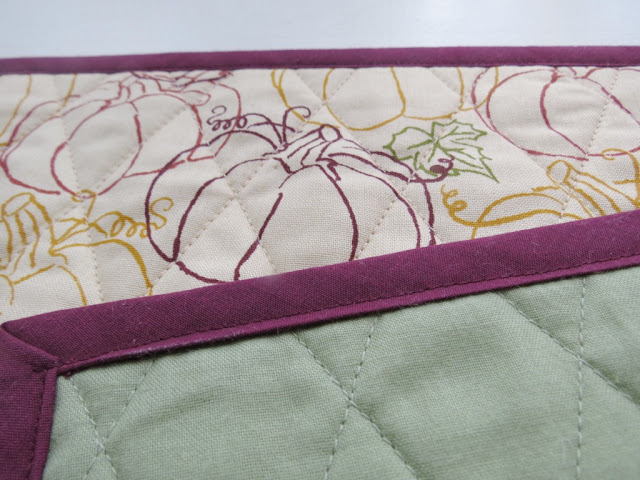 So that's one thing off the list. I'm so very ready for fall--after what seems an eternity the windows are open, I can comfortably wear jeans, and I plan on spending the afternoon outside with a new book and some crochet. 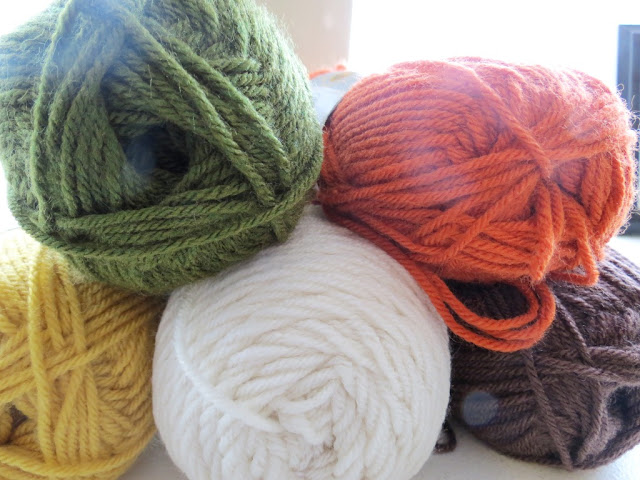 A retro-colored granny square blanket will be in the works soon. I couldn't get it out of my brain so I figured I should just buy the stuff since once I get an idea I don't let go.

Now if the temperatures and humidity would stay down my happy level could keep increasing. I'm ready for jeans and sweaters and boots and hot chocolate and crunchy leaves and the smell of bonfires. Bring it on :)
From the convoluted brain of Bethany at 1:50 PM