Pretty much my only accomplishment this weekend was sitting my rear on the sofa and stitching away (amongst some shopping, of course). The weather is so dreary and gray there was no hope of decent photos, so hopefully your imagination is working today.

I don't know about you but I go through spurts with my crafting. Since I finished up some orders and organized my stash to within an inch of its life I haven't felt like making a mess and sewing things. But I always feel the need for busy hands so I decided to make some felt ornaments. Because I felt like it. Hahaha! Geddit? A few weeks ago I was in Barnes and Noble. I had gone there with the intent of buying some craft mags but they didn't have any I wanted. Since I had the idea in my brain I needed to leave with some sort of crafty tome. Since I love making cutesy stuff with felt I decided on this one: 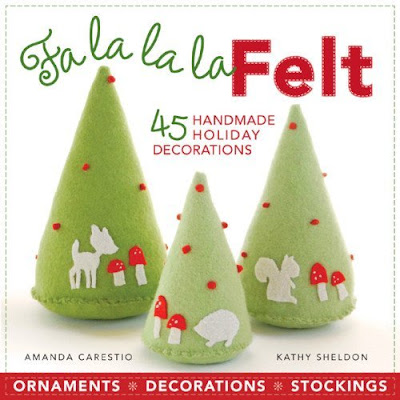 I'll be honest--the projects are super adorable but a lot of them are creative takes on basic shapes. My creative thoughts come in waves--the busier I am the more they ebb, and that's where I am now. So I wanted a book that said "Do this" and that was that. If I was at a creativity high tide I might have flipped through and left it on the store shelf.

I picked a few things and stitched them up the other night with my stash of buttons nearby. After working with regular acrylic felt I understand why, if what I've read is true, wool felt might be preferable. The price of wool felt is not preferable to me, especially for some ornaments, so I cheaped out.

Here's what I made: 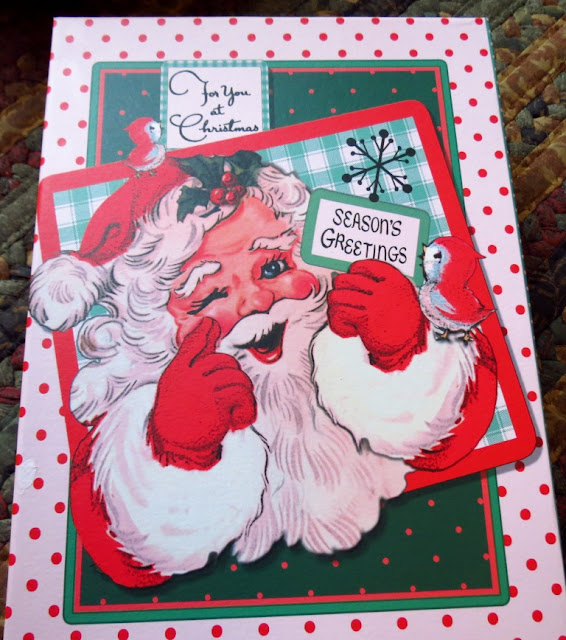 I didn't make the box--I just thought it was way too adorable not to share. It was the only one in this design or I'd have picked up a few, just to hoard. 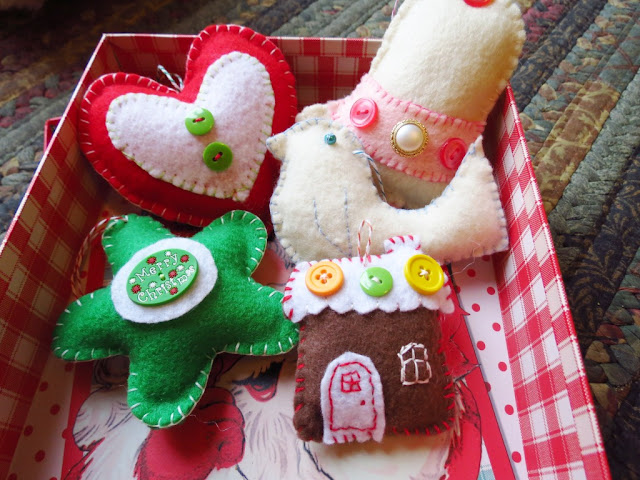 The super-cute box came from AC Moore (which is pretty much the same as Michael's, but a little cheaper). 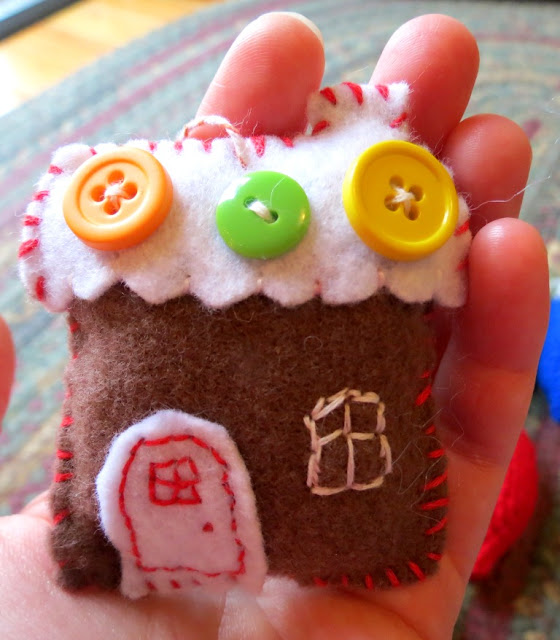 This was the last one I made. Can you tell I was feeling tired at this point? Good thing gingerbread house renditions are not normally known for fanciness and perfection. 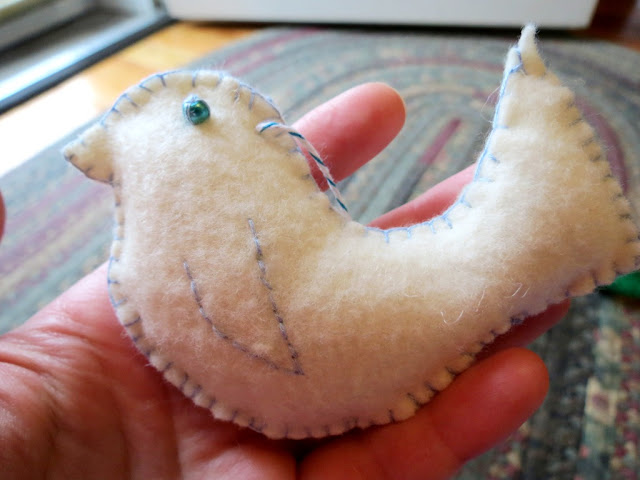 The dove was the first thing. It took me a few tries to get the eyes just right. Have you ever noticed how proper eye placement keeps a bird from looking creepy? I should have taken a few pics of the early tries to show you. I wanted this bell to look very sweet and feminine--the pink and the pearl buttons make me think Victorian. Just don't look too closely at it, m'kay? 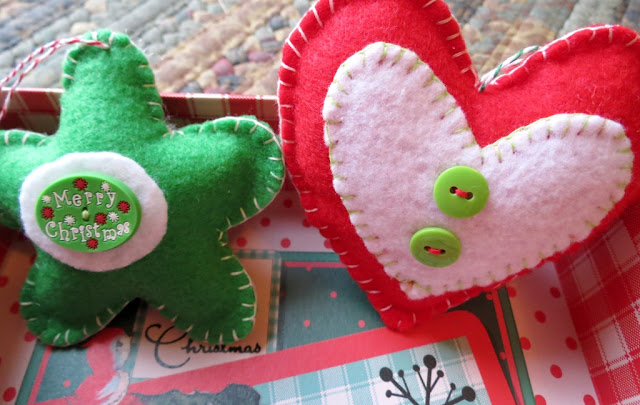 And here we have a couple basics. The heart with its buttons makes me thing of a red suit with a white dress shirt--like a funky Christmas get-up.

Last night I popped in A Christmas Carol and hopped to with my hook and some yarn and stuffing. I saw this tutorial and got irrationally giddy about the thought of making some. My practice attempt looked like a dirty carrot with an aluminum foil tiara, but I worked out any kinks so my official attempts would be good. Just what the heck am I yammering on about? Why, gigantic crocheted light bulbs, of course! 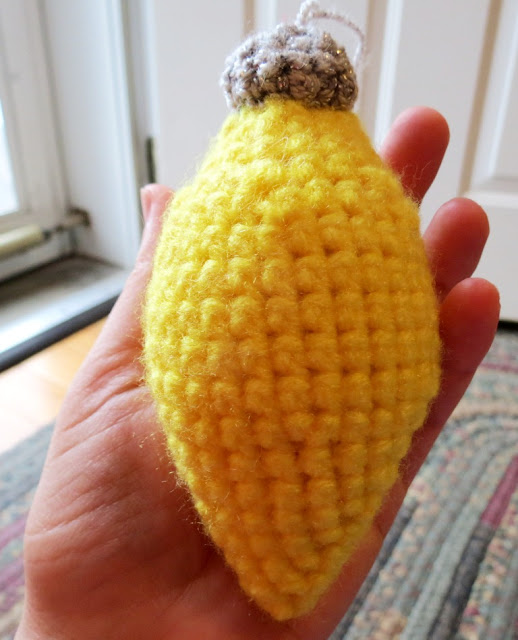 I'm not usually a 3-D crocheter, so they were weird to do at first. I wasn't sure about their visual proximity to the real thing, but after a night's sleep and fresh morning eyes I like them. 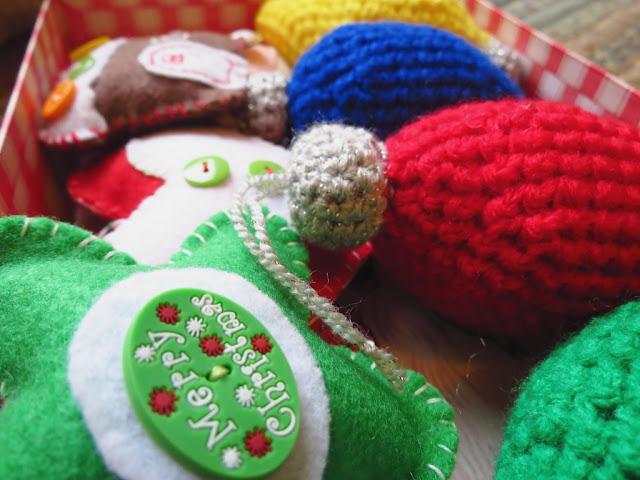 I did one in each of the four main colors. I used regular cheap yarn for the bulbs, and then some of Vanna's Glamour held double for the socket part.

When I made the first one (the dirty carrot version) I asked my Dad if he knew what it was. He looked, considered, and said (not incorrectly) "Well...it's obviously a...shaped...thing...that has a sparkly top. It's an ornament....it's an ornament." I squinted and tilted my head and considered it good enough to continue. 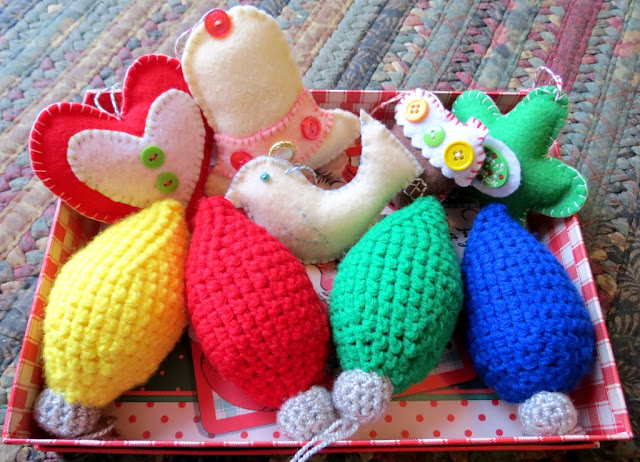 Kind of cute, right? I hope--they're going to be a gift for a friend I don't get to see often.

If you want to make the bulb ornaments I did change one thing about the pattern--at the very beginning she indicates 2 rounds of 6. I found that one round of 6 worked sooo much better. Other than that I followed along as indicated.

Not bad for a weekend of sitting, eh?