The Funeral Dress: Review and Giveaway

A few weeks ago, Penguin Books got in touch with me and asked if I would like to review the just-released book 'The Funeral Dress' by Susan Gregg Gilmore. After I picked myself up off the floor at the surprise of being contacted for such a thing, I read through the summary and told them quite emphatically "Yes!!!" You may think my first love is sewing (and you'd be justified in that thought), but my very first true love is reading. I can skip sewing for a few days, but I cannot turn off the bedside light without reading a few chapters. Anyhoodle, here is the official publisher's description: 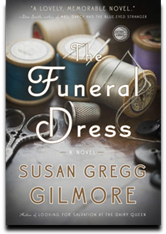 "Emmalee Bullard and her new baby are on their own. Or so she thinks, until Leona Lane, the older seamstress who sat by her side at the local shirt factory where both women worked as collar makers, insists Emmalee come and live with her.  Just as Emmalee prepares to escape her hardscrabble life in Red Chert holler, Leona dies tragically.  Grief-stricken, Emmalee decides she’ll make Leona’s burying dress, but there are plenty of people who don't think the unmarried Emmalee should design a dress for a Christian woman - or care for a child on her own. But with every stitch, Emmalee struggles to do what is right for her daughter and to honor Leona the best way she can, finding unlikely support among an indomitable group of seamstresses and the town’s funeral director. In a moving tale exploring Southern spirit and camaraderie among working women, a young mother will compel a town to become a community."


I'm not going to keep you in suspense--I loved this book. I often find myself sharing a book with the preface "It's kind of boring for a little while and then it's really good." This book was not like that at all. I was into it from the very first page, and had to force myself to put the book down and go to sleep each night. The characters are realistic, and you can see the verbal picture she paints of the backwoods areas of Tennessee quite clearly.  There were a few parts within where I thought I might actually cry, she writes the scene so vividly.

The characters are written so that you feel as though you know them (and hate the ones you're supposed to hate and love the others). There's Leona, Emmalee's sewing-machine neighbor at the shirt factory, who has that "I'm a nice person but don't let word get out" kind of quality about her, and her husband Curtis who sounds like the nicest man in the world. Their story is both heart-breaking and beautiful. There's Nolan, Emmalee's father, who's a real piece of...that. Every once in a while you feel a bit of hope regarding him, but you feel just as stricken by his actions as Emmalee must have. There are her aunt and uncle, who think Emmalee should give her baby to them, and the other seamstresses who rally around her in support.

This book of course mentions sewing (many of the women take in sewing on the side after sewing for hours upon hours all day--not sure I could do that) but it's almost as though it's a metaphor for the stitches that bind the indomitable spirit of the women together. When Emmalee gets the job as a collar maker, she is told her expected quota will be 150 dozen collars per day. That's 1800 collars. I felt anxious reading that and imagining how hard one must work to achieve that. But that's the thing with these women--they do it because they have to, they don't complain, and they do it year after year after year. It's mind-boggling when you consider how today many people don't like to do anything for longer than eleven minutes (that's the length of time between commercial breaks) because they get bored. There's a lesson in there somewhere....

I liked that this book wasn't crazy predictable. Just when I think things had to get better, here came another left-field zinger to make me say "Are you freakin' kidding me?" or something akin to that. I was sorry when this ended. I truly was. As for the style of the book--the author doesn't write this in a totally linear fashion. She goes back and forth between past and present, effectively telling two stories at the same time, building character after character as she goes. You learn the town's and the people's past and present, all coming together at the end nice and neat (some people don't like that in a story, but I prefer the happy ending).

Sound like something you'd like to read? Hopefully so, because Penguin is graciously giving away a copy of this book to one of you. All you have to do is leave a comment below telling me the name of a book you liked--it can be your favorite, the most recent one, fiction or non-fiction, one you hated (that could be interesting), one you've read with your kids, and so on... I'll leave this giveaway open until Tuesday September 17th at 11:59 P.M. ET. I'll draw a random winner and let you know who it is on Wednesday. Good luck!!

I was not financially compensated for this post. I received the book at no charge in exchange for an honest review. The opinions are completely my own based on my own experience. For my complete disclosure policy, click here.
From the convoluted brain of Bethany at 7:42 PM

New comments are not allowed.