When my sisters were little they had this fabulous Fisher Price doctor kit that came in a "real" doctor's bag and everything. A lot of hours were spent playing with that set. It looked like this: 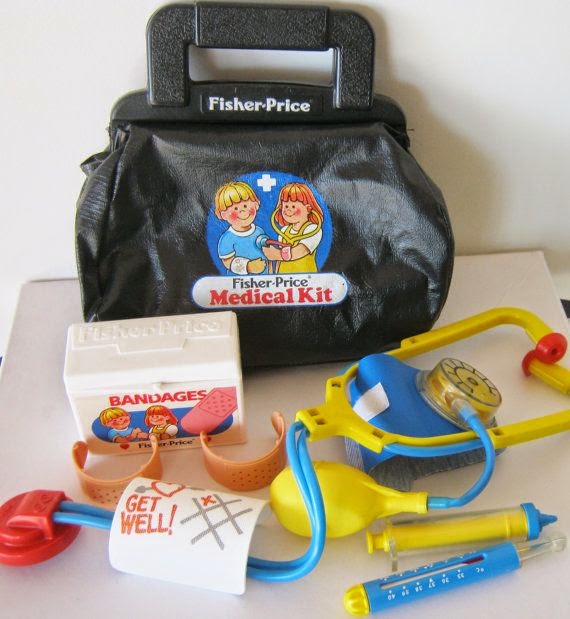 I think my brother and I may have had a similar kit, but an older version. While I don't remember the contents, I do feel like I have a vague memory of the box-- 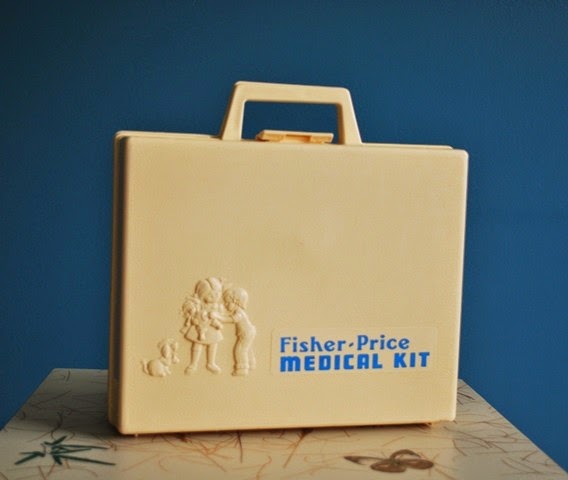 Going through images on Google it looks like the Fisher Price doctor's kit hasn't varied much over the years, each bearing these essential contents (A-train loaned me his gear for a few minutes)-- 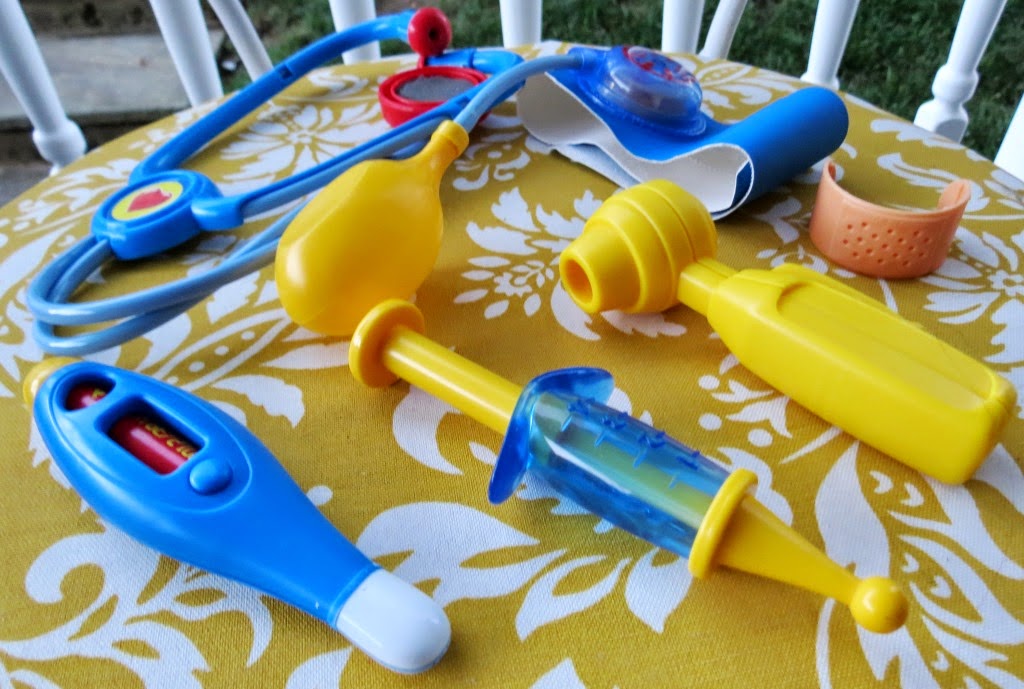 When Rachel brought the tot over one weekend with his little doctor's kit, we all saw the bag it came in and looked at each other like "What the hell?" Apparently this is what FP considers suitable for an aspiring doctor to carry their necessities in-- 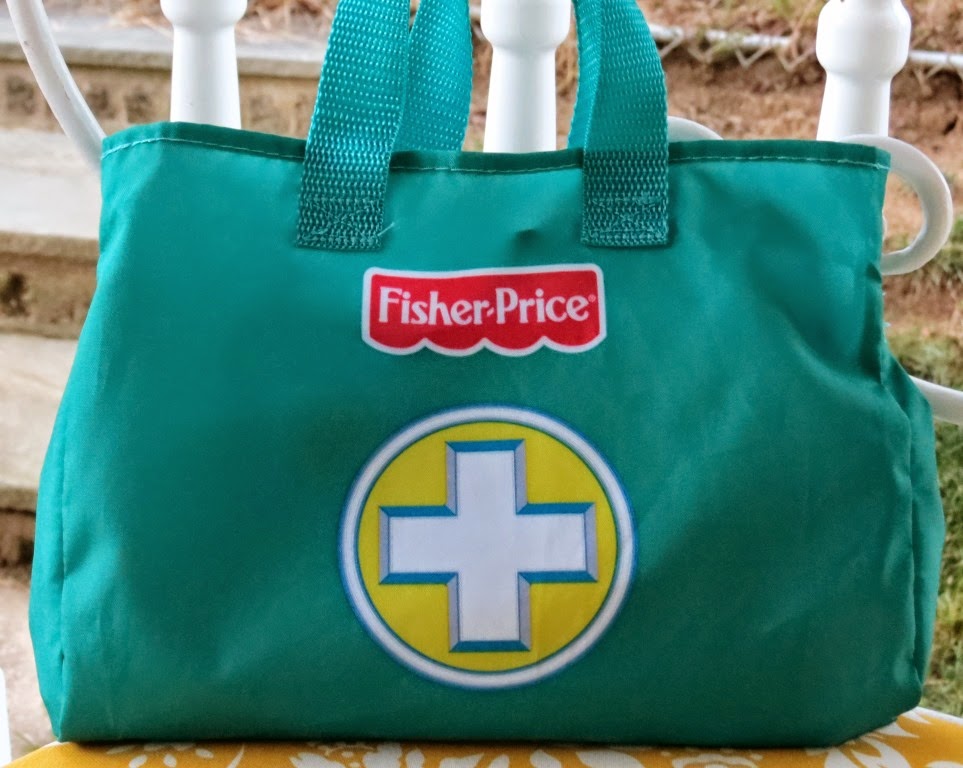 As a current former kid I found this appalling. It's not even a nice tote bag. It's quite cheap feeling. I had full intentions of making a new bag for a while, and last week a new pattern and new fabric came together in a light-bulb moment for Saturday sewing motivation. My blog pal Jane (who sells patterns and sews bags and has a delightfully wry sense of humor) put out her new pattern for her Little Boxy Bag. I loved the shaping of it so I bought and printed that puppy out right away. Then I remembered that my sister Alicia's co-worker gave her a nice-sized cut of faux leather, which she was perfectly willing to share with me. I have never sewn with the stuff before, so I was a little bit nervous as I had no idea what to expect. My scissors sliced through like a hot knife through butter, and my 80/12 Microtex needle and Teflon foot showed that stuff who was boss. 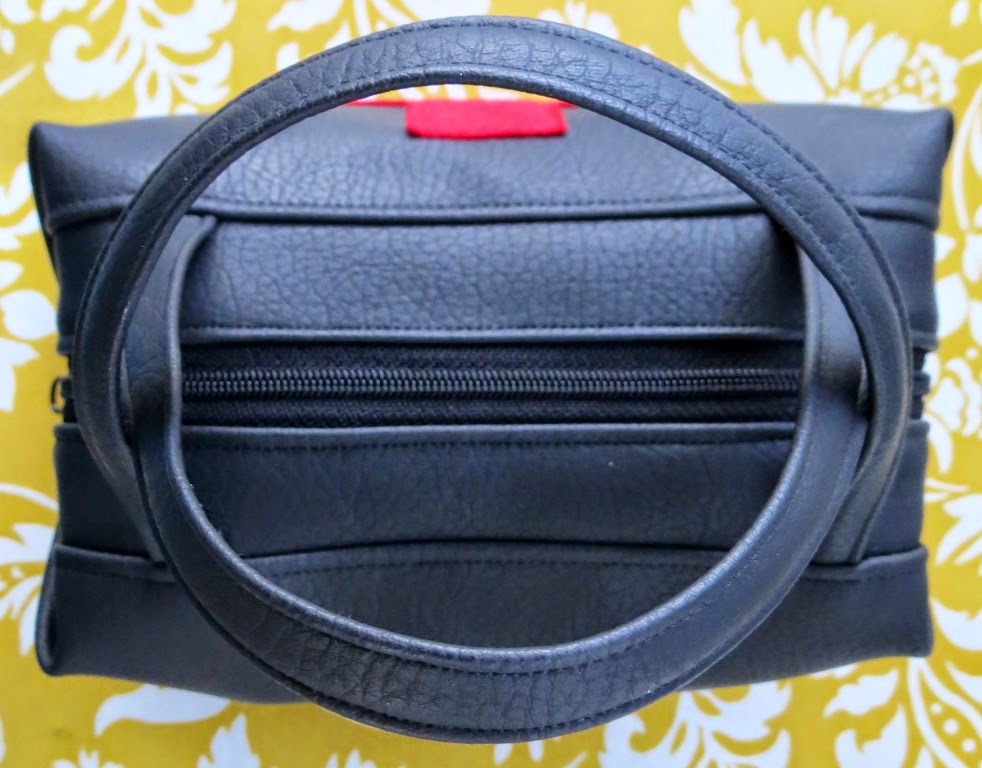 I was so amazed at how nicely it came along (as this is surely the type of thing I'd mangle right out of the gate). The fabric was very soft and supple, and felt almost like real leather. Even the top-stitching had me grinning (I'm not going to lie--a lot of the time I put into making this was me staring at it at various stages, just admiring how nifty it looked as I was nervous I was going to do some unimaginable sort of thing to it along the way). 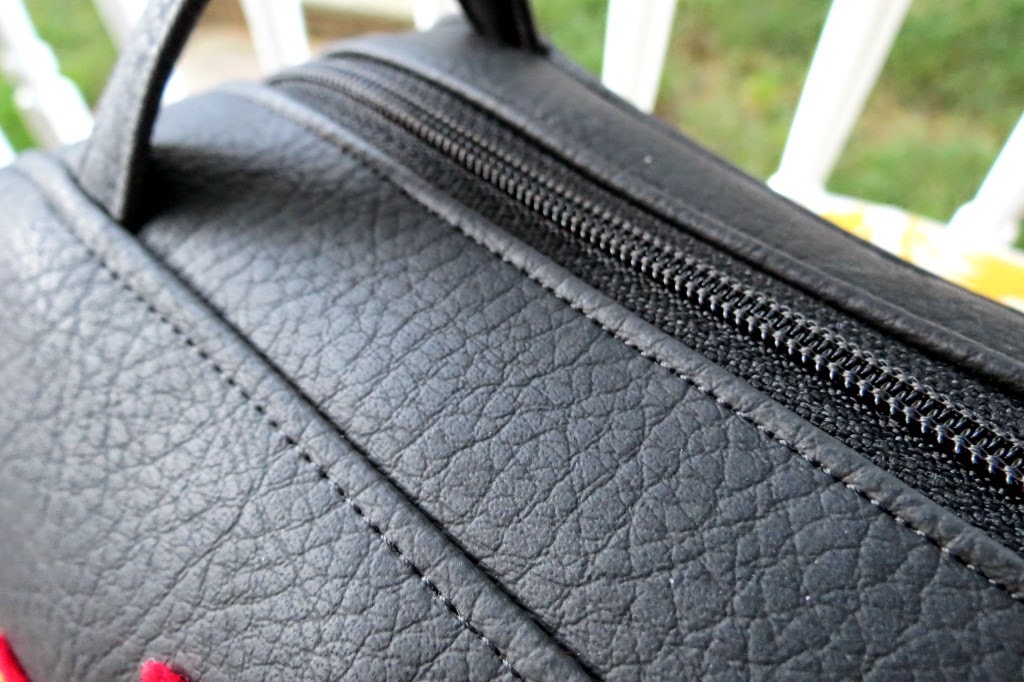 I got very nervous at the side where the pleating is done, and I thought "Oh, OK, this is where your lack of forethought is going to bite you in the rear." I had an extremely bulky thing to stitch through--four layers of pretty thick faux leather, and four layers of cotton, with a zipper in there. I thought my machine was going to throw a tantrum and a repair bill might ensue. But I simply said "Harriet, you can do this." And she did. She sewed through about a half inch of layers like it was nothing. I was floored. Pleased down to my toes, but shocked. It was one of those things where you want to run up to anyone and say "Look at this seam!!! Now feel it!!!" 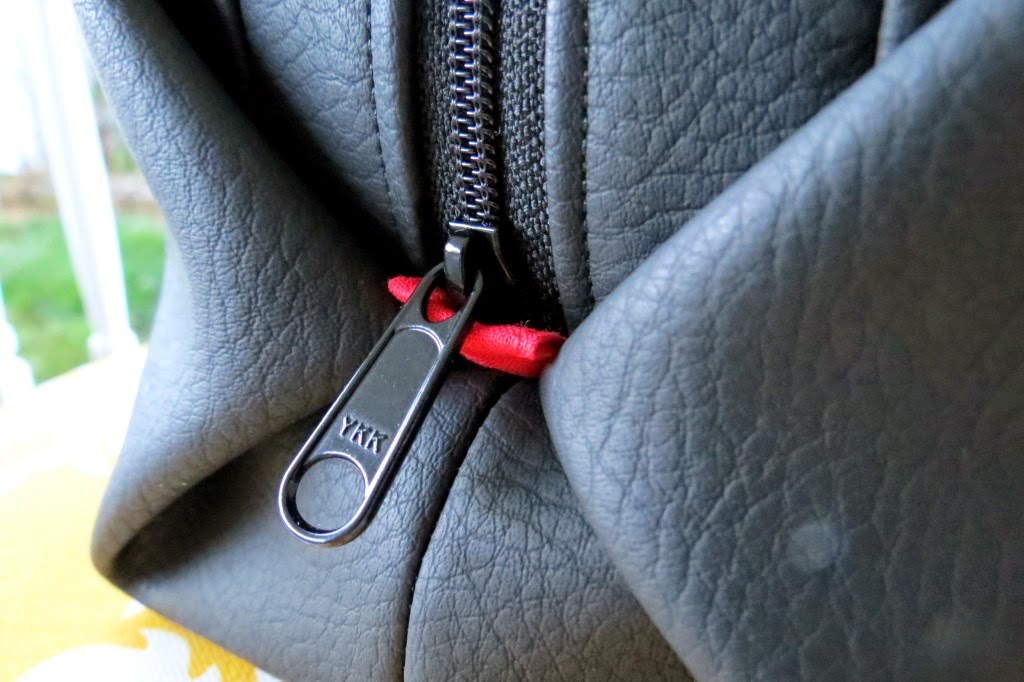 My pull tabs got a little eaten in the seam, but, as my mother keeps reminding me "He's two!" And I know that, but he's two with a perfectionist auntie. However, I know how to pick my battles and a smaller than intended pull tab is a nice trade-off for a successful everything else. I was going to line this in red, and started to before I remembered a fat quarter of fabric I had from something else that might work. I already had the zipper gusset sewn in, so that was staying. But I was able to make the bottom of the lining in this most perfect print-- 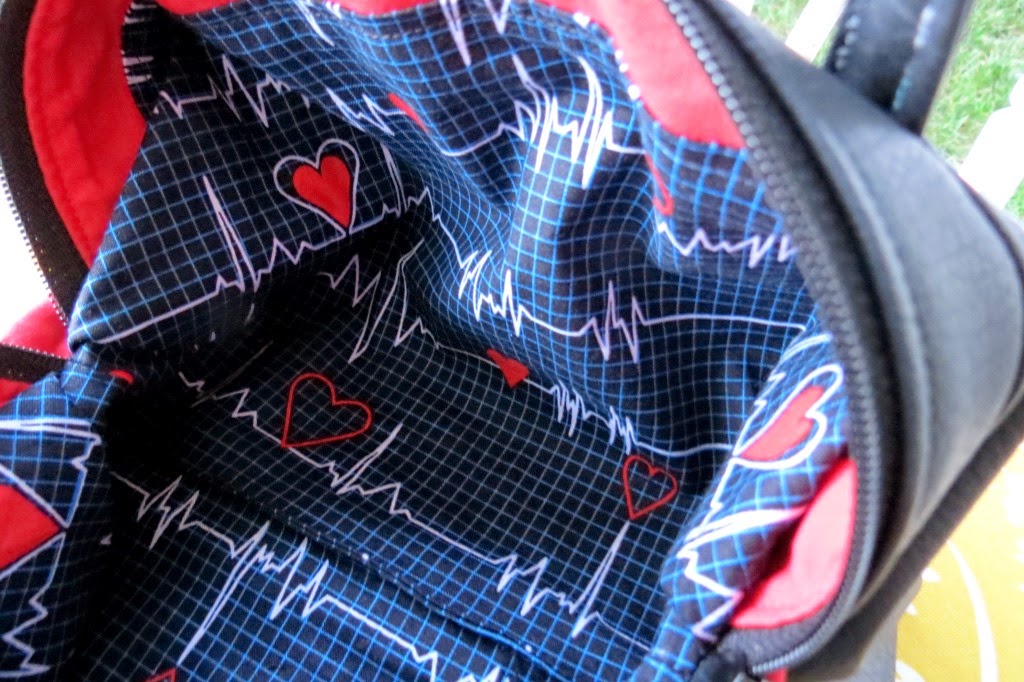 And everything fits in there, snug as a bug in a rug (which is a creepy expression if you think about it too much, so don't). 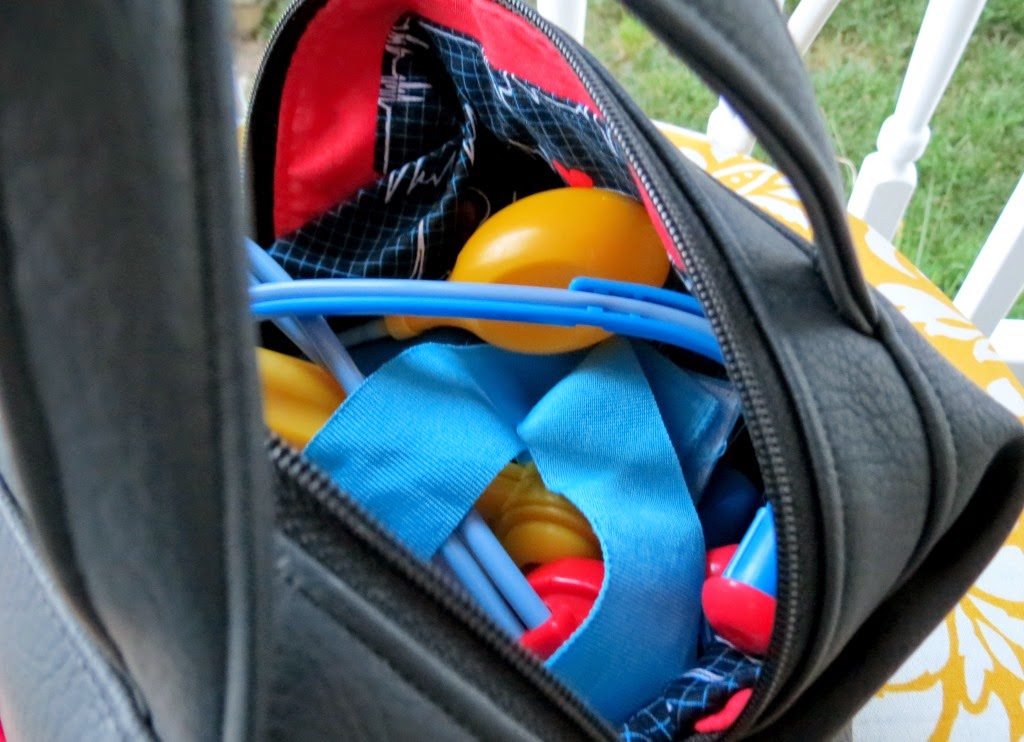 I gave this to him today, and my sister exclaimed "It's even better than I thought it would be!" Which, thanks, I guess, hahaha. The A-train immediately listened to my heart (which, coincidentally, is right behind my belly button) saying "Lub-dub, lub-dub...sounds good" and then went back to playing trains. 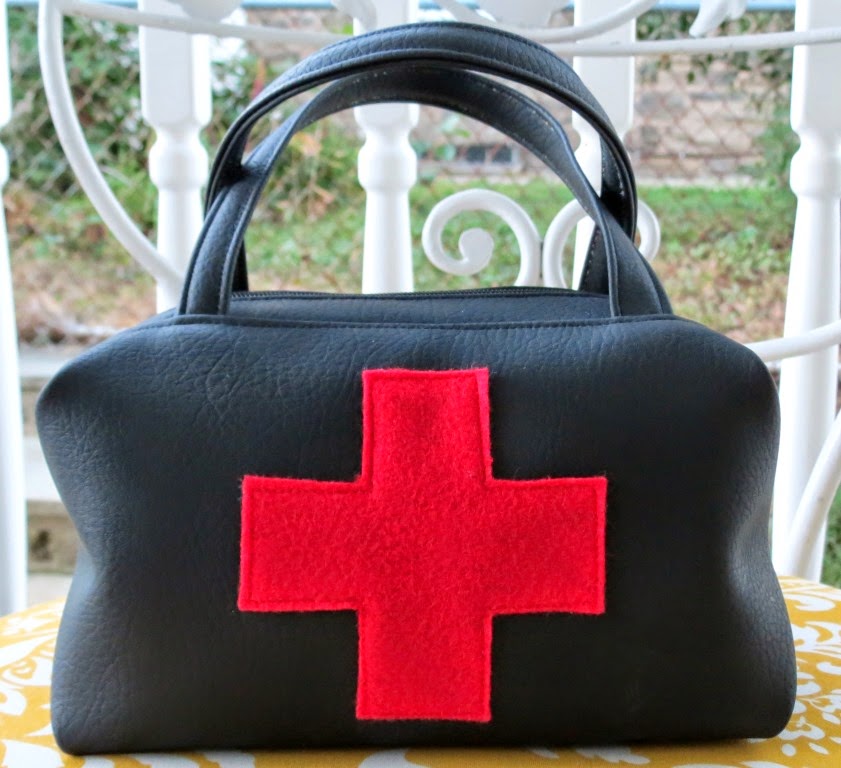 This may be one of my favorite things I've made (which, I feel like I say that a lot about things I make for my nephews--I think it's the love in the stitches). I can rest easy knowing that a sufficient doctor's bag now exists.

As for the pattern--absolutely superb. Plenty of photographs and descriptive text. Nothing is left to question like some patterns. As I've made bags before (just a few :) I could skim some of the directions, but for the parts that were new to me (those side pleats) I took it step by step, and boom--perfect pleats in one shot. The only issue I had was bulk, but that was entirely due to my choice of using faux leather instead of regular fabric, and that just required some trimming and no real difficulty. That's how awesome the pattern is--the only trouble was no trouble at all. It also took not much time to sew--this could have very easily been maybe a one to hour project, but I had thread color changes and presser foot changes that slowed me down (as well as the stopping and grinning and strutting around, which takes more time than you'd think).

All in all I had a fabulous fabric weekend. I finished testing another bag which I can hopefully share soon, and made up another project for fall which will be up as soon as I can get pictures (these earlier sunsets are still taking me by surprise as I don't have the time in the evenings for sunlit photos as I did what seems like only yesterday). But I'm not complaining--it's getting close to sweater weather!!! Which reminds me...I've got knitting to tend to. Later, taters!


Linking up here this week:

Monday: Made By You Mondays, Craftastic Monday
Wednesdays: Your Whims Wednesday
Friday: Weekend Link Party, Finish It Up Friday
From the convoluted brain of Bethany at 10:25 PM