Coastering into the new year

Hello, dears. I'm still a little "Whaaaaaaat?" that the holidays are over. Everything is packed away but the tree and it's almost like it never happened. My computer tried to commit suicide on New Year's Eve, but my lovely brother in law Matt (who says I never mention his name on here but now I have, so there!) is quite the tech geek (and I do mean that in the best way because I was near tears) and was able to pinpoint the problem for me from some mumbo-jumbo on my screen. A few new memory cards (and some $$$$$ later) and I'm back in action. Not a happy feeling when it happens, but a delightful one when all is well again.

ANYway, I did a wee bit of sewing (other than making ruffly strips of nothing) this break. Flossie Teacakes posted some time ago an adorable little tutorial for quilted coasters. They seemed the perfect project for when you want to make something quick and easy. So I had myself a go at them. The fabric combos worked better in my head, and I had to switch to a walking foot and eyeball my measurements because the 1/4 inch foot was making everything smoosh, but they were fun to make. I'm going to force you to look at them now: 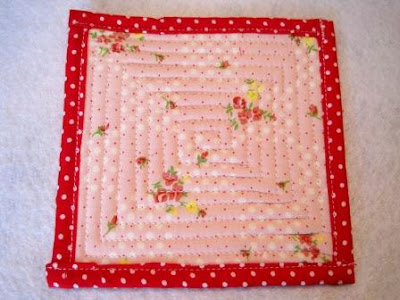 The red washes it out a little too much but I still like the contrast. 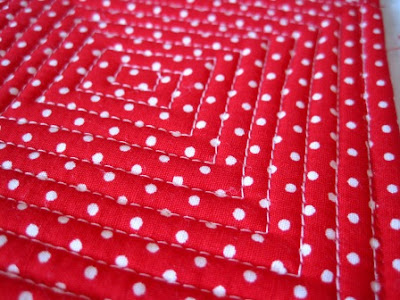 And they're reversible if you like the other side better. 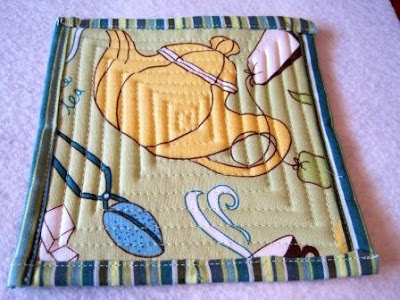 It looks poofy and bumpy but they're actually quite even and won't tip your drink over. 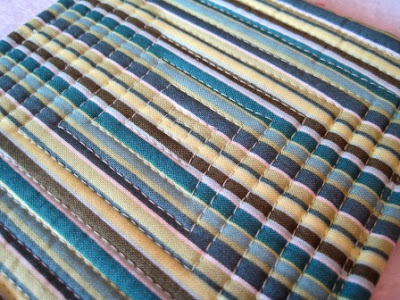 I like how the stitching is more subtle on this one.
I used spray fabric adhesive for these, which was much nicer than pins on such a small project. The fold-over binding is very easy, but I should have hand-stitched instead of machine for a more precise look. But they were quick and easy and satisfying--which is just what I was looking for on a dreary afternoon. I am really in love with the square-spiral quilting, and it's great for using up some larger scraps.
That's all I've got for now. Very exciting, I know. Have a lovely week! It's back to normal for me (which isn't necessarily a bad thing). Cheers!

From the convoluted brain of Bethany at 3:46 PM