When it matryoshkas it pours

Have I professed my love of Russian nesting dolls to you before? I know I showed you the stall at the Christmas Village, but I'm not sure if I told you that I adore them. Because I do. I have no idea where this love comes from. I remember being about sevenish years old and sitting in the waiting room at the dentist's office (or was it the eye doctor?) with my older brother, waiting for my mom to be finished with her check-up. There was a man and a woman and their young son waiting as well. It's fuzzy with time, but I seem to remember a sort of "ethnic-ness" about them (perhaps they were Orthodox Jews? I don't know). This boy was sitting there playing with a set of nesting dolls. And oh, how I wanted them! I wanted to unnest them and line their painted bodies up perfectly, and arrange them as though they were having a family portrait taken. In my mind, all I had to do was say to this unknown boy "Those are really neat" or something similar, and he would give them to me. So I said it--and his mother sort of clucked to him and told him in some language to come sit with her (I assume that's what she said because that's what he promptly did). I remember thinking how rude it was that she wouldn't tell her son to give this strange girl his toy. Isn't the kid brain funny? Or was it just me? Probably just me.

Anyhoodle, my mother gave me a set of these dolls for Christmas. I was just like the proverbial kid who gets the most amazing toy and plays with the box instead. What can I say--I was probably a deprived child. No, I wasn't. I'm just a nerd. Our tree is still up and I wanted to play with blurry backgrounds and I didn't want to wait until the weekend for sunlight to take these photos because it's supposed to snow anyway so the light wouldn't have been that great so that's why they're kind of low-lit, but I like how they look with the colored orbs in the background anyway. Got that? 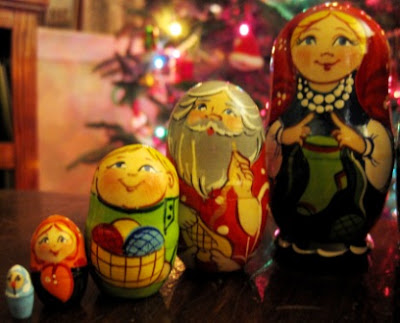 So not only are they nesting dolls, they're nesting dolls who are yarn-crafting. Come. On. Adorable!!!
As if that's not enough...I returned to work on Monday from my long vacation. My friend tells me she has a surprise to give me at lunch. I go downstairs and she's telling me that I'll never guess what it is. She was right--I thought she found some novelty fabric or candy or something, but nope. Turns out SHE went to the Village with her husband and  bought me a set, too! 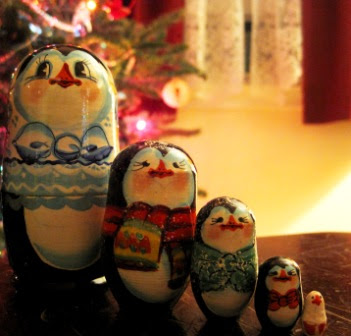 And is there anything cuter than a penguin? Other than my dog, of course...and my nephew.
It's like my own weirdo version of The Brady Bunch: 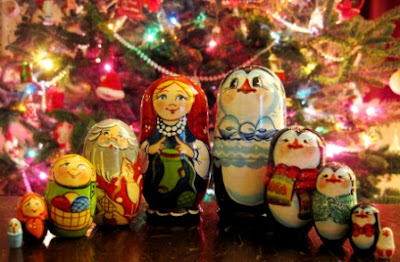 And if the kids get out of hand you just...take off your head and put them all inside. Easy clean-up! 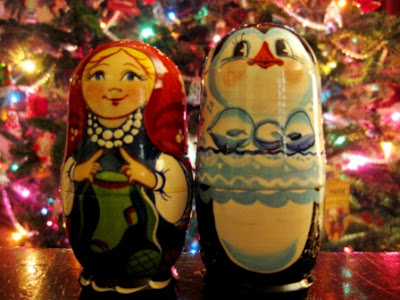 Now I can officially say I collect these. Because I bought this one on my mountain trip in the summer: 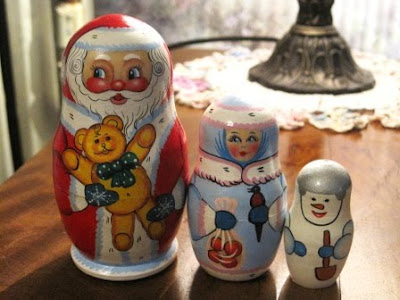 These definitely do NOT have the craftsmanship of the others but they're still cute.
I fight with myself to not stock up on these (I'm trying to decrease my stash): 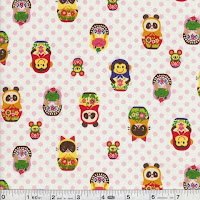 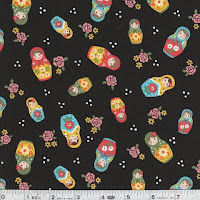 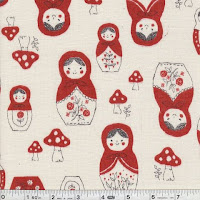 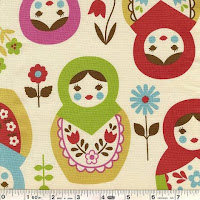 All images from Super Buzzy


Don't you just love when your favorite things are given to you by your favorite people?
From the convoluted brain of Bethany at 8:07 PM