I don't remember where I saw these originally, but I know I clicked on a link and ended up at the Heather Bailey blog:

When I see something like this, I have to make it immediately. If I were to see this at 3 a.m. I would get pretty annoyed that no craft stores would be open to satisfy these late-night cravings. So I headed straight to AC Moore to load up on Valentiney papers (which were on mega-sale--WOOT!). And a glue stick. I printed out the pattern from here, and set to work. I ended up using a cup to trace all those circles. Cutting them all out may be the least fun thing I've ever done. And I had a claw hand for a little bit until my scissors muscles relaxed. You know how I overdo things? Yeah....I cut out enough circles for eight of these in one sitting. That's 160 circles. Plus I had extra...a lot extra. I recommend smaller doses of these because by the time I got to the end I was just feeling done with it. But they did turn out cute: 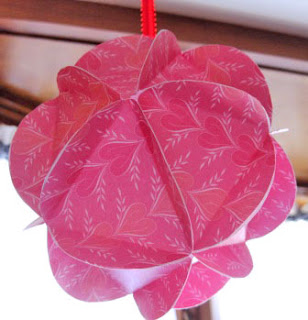 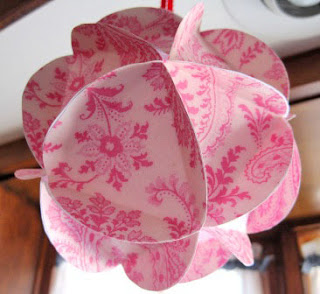 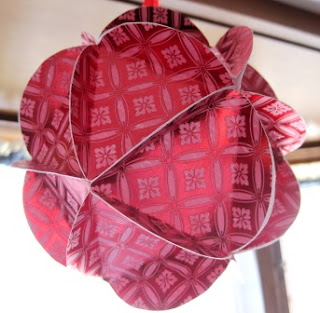 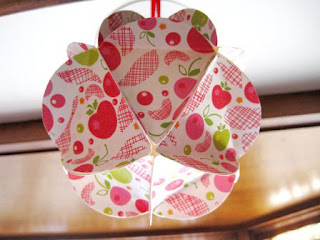 I didn't add any little dangly things to the bottom (obviously) because I was just too excited to make one I didn't even want to consider embellishments (although they would have been cuter). My edges are a little...not as neat as they should be, but you can't really tell. I strung them up on some red ribbon, and now they are hanging in front of the kitchen windows. 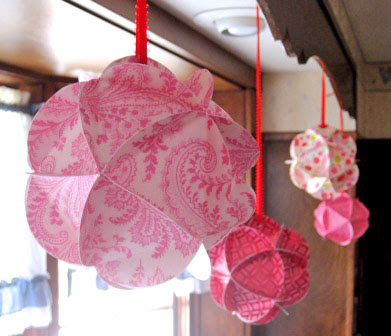 I showed one of these to the nephew, and I prefaced it with "Do you want to see a shape I made that has twenty faces?" Math is his second language and it's a foreign one to me so I thought he'd be excited. I showed it to him, he looked at it, and went "Mmmm-hmmmm." I said "Don't you think that's awesome? It's made of paper and it has twenty faces!" The response: "It's okaaaayy...you're always trying to amaze me with things like that. It's not that amazing."

But I like them. I think their construction was pretty interesting, too. They look much brighter in person, but this is the worst window to take pictures near. It's always flooded with light so unless I climb onto the windowsill the pictures will be blah. I wouldn't make this many again, though. I think one would be cute at Christmas with some felt mistletoe or something--kind of like a kissing ball without the poisonous berries. If you choose to make any of these here's a tip on the link: it downloads a zip file to your computer. When you go to unzip it there are two pdf files in the folder. The second one (the larger of the two) is the one that contains the instructions. So if you click on the first file and get nowhere don't despair.

That's all I've got for now. Hopefully my nesting-doll project will be blog ready this week. Which is Bee-speak for "I'm going to start tomorrow." Have a deeee-lightful Monday! And can I get a collective "Reaallllyyyyy????" on the fact that January is already over? Where the h-e-double hockey sticks did it go?

From the convoluted brain of Bethany at 10:53 PM