I love you guys. Sincerely. Thank you for your comments and emails and kind words. Why is it the days fly by when you're having fun, but when you want the emotional unrest to pass the days take their time to linger? I'm sure a scientist person would tell something about perception and days are always the same length and blah blah blah, but I'd probably just gesture rudely. At least my nephew provided me with a 1-2-3 punch of amusement tonight...

First, I said to him "Hey, bud, should I go to my aerobics class tonight or stay home and make things?" He put on his thinking face, then said (making the gesture and everything--the one where you kind of hold your hands like you're literally weighing the options) "Smaller butt or arts and crafts.....bah, stay home and make something." I don't know why but I almost cried (in a good way).

Then (and I'm still chuckling over this one) he went down the basement to practice shooting hoops (he has one of those over-the-door basketball nets set up in the perfect spot for practice lay-ups...or something). I heard him moving the bench my dad is refinishing and I went downstairs to make sure he didn't touch anything he shouldn't have when I saw him at the back door. Our basement door opens out into a set of stairs that lead up to the backyard. He's got the door open and is just standing there (and there's nothing to see but concrete). When he turned around, he was ADJUSTING HIS WAISTBAND. I said "Uhhhhh hey--what were you just doing?" And he looks at me dead serious and says "Taking a leak." My jaw dropped and I was doing a shocked laugh kind of thing, and he says "I do it all the time. There's a drain right there." SUCH a little man already.

Finally, I had pulled out my box of fancy papers and other stuff and was sitting at the table making little flowers (which I'm totally doing a tutorial for--so easy and fun) and he was playing something on my computer. He turns and says "I like when it's like this...you do that stuff and I play, but we're still sitting here together." I don't think my heart can take much more this week.


Anyways, my pal is doing better, but as the saying goes "Time heals all wounds." I hope it's true. But a sweet nephew helps too. I talk about my nephew a lot but I rarely put his face on here. Here's a picture of him in all his glory: 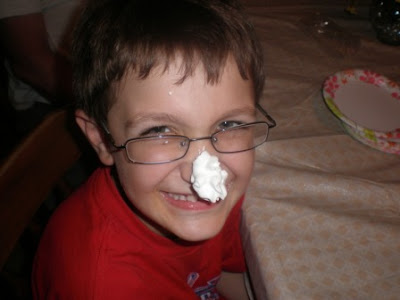 As Meream wrote to me the other day "I want to be like him when I grow up." Me too.
From the convoluted brain of Bethany at 11:08 PM