Last week I was strolling through blogland when I saw that Rock 'n Regalia had made a fabulous find. Immediately after work I drove to Michael's to score my own similar deal. I bought six mini canvases with various simple prints on them. I painted over the pre-printed graphic with a few layers of gesso (I dunno the difference between that and paint but my sister said it's made for that purpose). My inspiration wheels were a-turnin' based on this little project from Life Made Lovely. And major plus--I had six chances to get it right.

So last night I pulled out some scraps and some buttons and Mod Podge and a few other little tidbits and ended up with this: 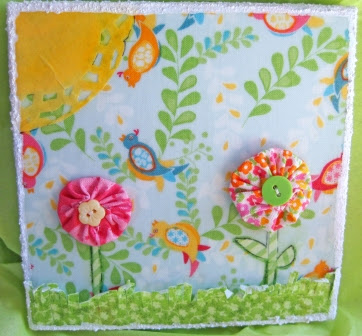 In my head (as always!) it was going to be a bit different, but I underestimated the brightness of the background fabric. It kind of washes out the stems of my yo-yo flowers, but I still think it's nice and cheery. I put SnowTex all around the outside of the canvas and a narrow line of it around the edges (otherwise it was kind of boring looking). This had the intended effect this time, hahaha.

Anyway, I was going to give this to my mom with her Mother's Day gift but I wasn't overly thrilled with it, so I just gave it to her with a hug. I put it put it out of the way to finish drying while we played Uno (the nephew's latest obsession). I made some off-hand comment about "that thing I just made that isn't very good" and he says "What thing? THAT thing? I love that!" You know how sometimes something touches you in a certain space in your heart, and then you get that burny feeling in your nose that precedes crying, but you don't actually cry? I got that big time. Because this kid could care less about almost everything I make. I asked him if he wanted it and he said "Yes--I'll give it to my mom. It was just her birthday!" So that's the new plan. I guess I get to make another one :)
From the convoluted brain of Bethany at 5:23 PM