Can I Hold the GPS?

Last week we headed out to the itty bitty town of Oakdale to visit my grandmama and to have our family reunion picnic. I'm quite the traveler, eh? Home from the shore, and then off again. It takes about 6 hours to drive out there, and this year we had the dog with us. He would only settle down on my mother's lap so for pretty much the entire trip she had a dog sitting on her. I, on the other hand, was in the back with Zach. It went something like this: "Can I have the pretzels? Where's my water? Can I hold the GPS? How do windmills make power? When are we stopping for lunch? That guy is picking his nose. Charlie - sit down! Why did they put solar panels in that field? When are my cousins getting there? Can we go to the candy store right away? When's lunch? Can I PLEASE see the GPS? Can I play with your phone? Put on Me and Julio Down by the Schoolyard on your iPod. Are we stopping soon for lunch?" Lather, rinse, repeat. I told him as we neared the rest stop that he had to please be quiet because Aunt Bee was starving and when she's hungry she gets cranky so please chill out. Which he did. When we ate he said "Do you feel better now, Bee?" I told him I did and he said "Good. I wanna sing. Can you put Me and Julio...."

So anyhoodle--if you've been coming here for a while you may remember that I posted about Oakdale previously (here and here and maybe a few other spots). My grandma was pleased to tell us that the long-icky Oakdale Diner had reopened and was actually an enjoyable experience. So me, the nephew, my mumsy and my grandmama headed there for lunch one day. Apparently it's not a photo hotspot because I got a few looks when the camera came out. 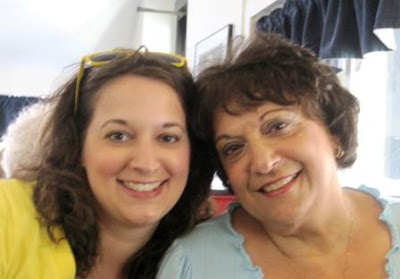 Here's a blurry pic of me and mumsy - this is what you get when a nine year old has the camera. Please note my awesome yellow sunglasses atop my head. 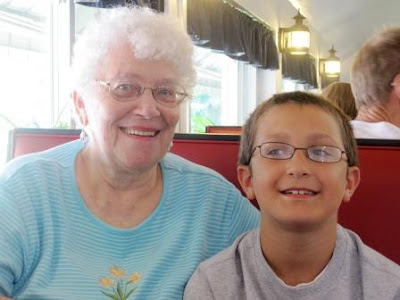 Here's Grandma and the boy. I don't know what he's looking at but something caught his eye a split second before I took the picture. 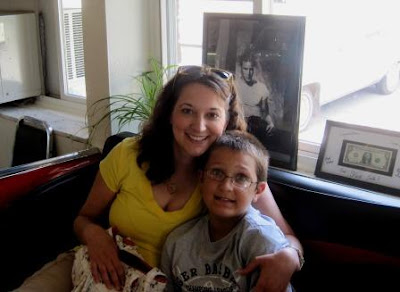 Here's one of me and the nephew. He's probably making that face because he saw more than he wanted to of my cleavage. I'm seeing more than I wanted to of it as well.

This year our visit was timed with the Oakdale VFD Annual Parade and Street Fair, which was Friday night. This baby is second only to the Macy's Thanksgiving Day Parade. OK, I'm lying. All the VFDs from all of the surrounding towns and counties spruce up their trucks and parade them through town, tossing out candy and freeze pops. They're judged for something but I'm not sure what. 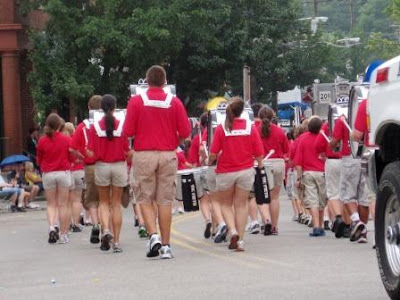 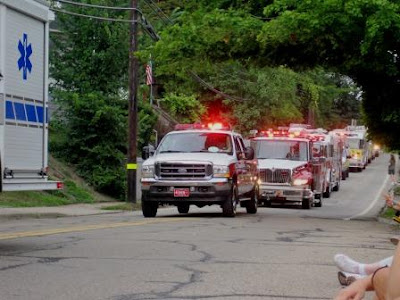 The trucks all come down this hill and through the town... 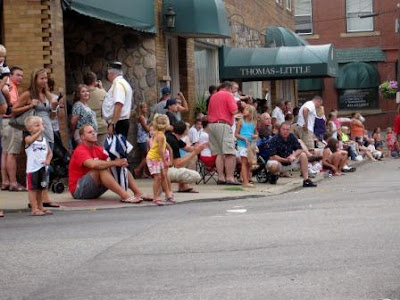 ...past throngs and hordes of people... 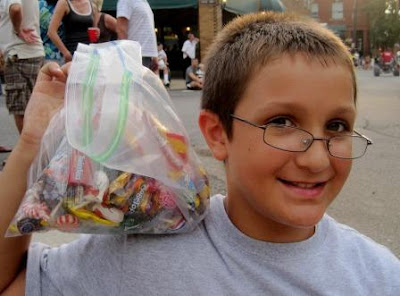 ...while the kids fend each other off for oodles of candy. 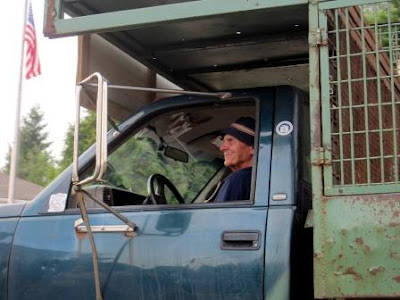 Recognize this guy? WHAT?!? You DON'T? 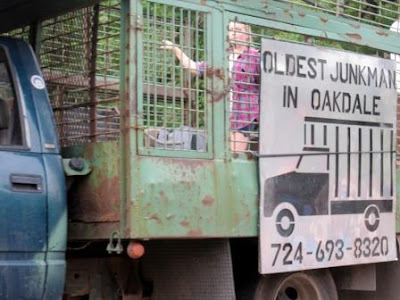 He's only the oldest junk man in Oakdale, folks.

I didn't get any pics of the street fair - but if you can imagine 'locals' drinking beer out of keg cups and playing bingo with corn for markers...then you've pretty much got an accurate image.

On Saturday we had our picnic. There was a ridiculous amount of food, and SOME people may have consumed several people's shares of cheesecake. And cream puffs. And dirt pudding. And cookies. After being stuffed to bursting, it was decided that this was the best possible time to take the family picture. This is no simple affair. First there's the argument of who's sitting on the ground, who's standing beside who, who is going to hide behind whoever...it takes forever. Then there's the getting of your camera to work. Some are better than others at this. 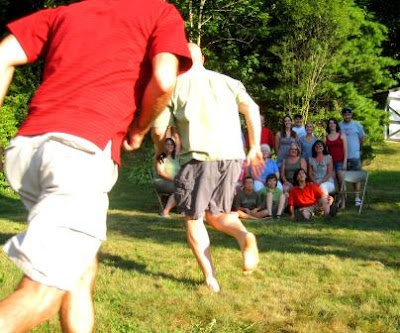 I set my timer too soon specifically so I could get "the run." 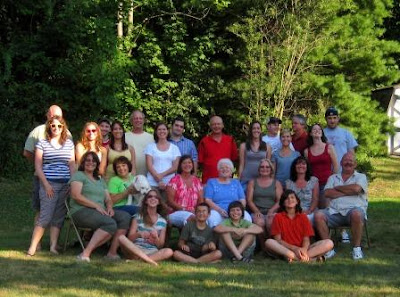 OK, here goes. I'm on the left in the stripes. My aunt Marlene is in front of me in green, and Uncle Rob (her husband) is right behind me being blocked by my big head (but he's two photos away so you'll see him again). Going towards the right of me we have sister Alicia, BIL Matt, sister Rachel, my Dad, cousin Mollie and boyfriend Martin, Uncle Keith, cousin Dana, standing next to Austin who is cousin Melanie's boyfriend, then Uncle Rick, cousin Malorie and (new) fiance David. Seated are my Aunt Marlene, my mumsy (holding Charlie), Aunt Kristie, Grandma, Aunt Tina, Aunt Barb, and Uncle Tom. On the ground are cousin Ashley, Zach, and cousins Josh and Justin. 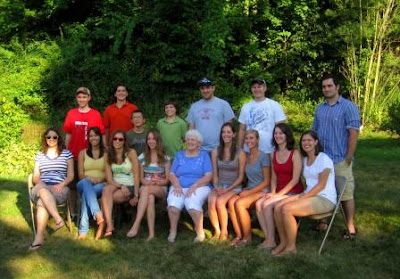 Here's the grandkids (and others) photo. In the back (as a refresher) is Matt, Justin, Zach, Josh, David, Austin and Martin. In front is me, Rachel, Alicia, Ashley, Grandma, Dana, Melanie, Malorie and Mollie. 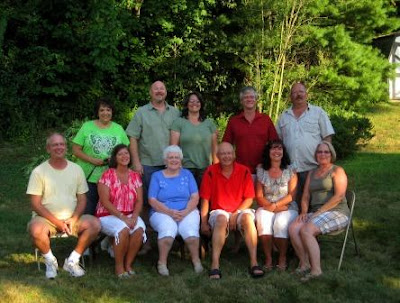 And here are the 'kids' and their spouses. In the back is my mom, Uncle Rob, Aunt Marlene, Uncle Rick and Uncle Tom. Across the front is my dad, Aunt Kristie, Grandma, Uncle Keith, Aunt Barb and Aunt Tina. My uncle Dave and his wife are missing - they live in Philippines so I guess that's a good excuse. 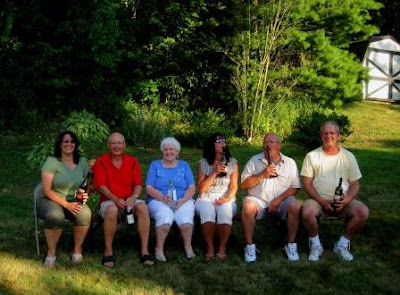 And this one is just of the 'kids.' One of the boyfriends is in wine sales, so he brought some of his samples to try. My grandma is such a good sport, posing with her bottle. It's narrowed down now to Aunt Marlene, Uncle Keith, Grandma, Aunt Barb, Uncle Tom, and my dad.

Get your pencils ready - here comes the who's who in the photos quiz :)
We were only out there for a few days that went by super fast, but I always come home inspired to try needle-turn applique and hand quilting. I'm going to try to get some pics from my grandma of her quilts to share with you - they're truly things of beauty. I want to plan a trip and just sit and sew with her and drink tea and listen to KDKA Pittsburgh. Fun fact: KDKA was the first station to broadcast in the country, and it's the only one east of the Mississippi whose call letters start with a K instead of a W. I'm sure that'll be good for bar trivia or something one day. File it away, folks. You never know when you'll need such valuable knowledge.

See you soon - I've got some fun little treasures to share with you!
From the convoluted brain of Bethany at 10:31 PM