Top o' the mornin' to you! I'm going to make this a brief post but I wanted to show you my latest quilt block for the Sewn QAL (the button is in my side-bar if you're interested in playing catch-up and sewing along). It's called Virginia Star, and features flying geese blocks. These were incredibly easy to make, and even pretty fun (some people I know fail to see how sewing bits of fabric together can be fun, but I trust a large bunch of you know just what I mean :)  I was having a bit of a self-imposed sewing frenzy and for some reason mentally pressured myself to "Get it done, and do it now!" I have no idea why. I have a long to-do list (I wrote it down and it's worse than I thought, but most of it is WANT to do instead of HAVE to do, which is infinitely better than the reverse), but nothing too pressing. I wasn't exactly accurate with my 1/4 inch seams and am about 1/4 inch short on the final block. Hopefully this won't be too big of a problem in the end. I wasn't thrilled with my fabric choices, either - I thought they were fine when I laid everything out, but sewn together they don't thrill me. I'm glad my pinwheel block had a lot of white space, because this one has a lot of red space: 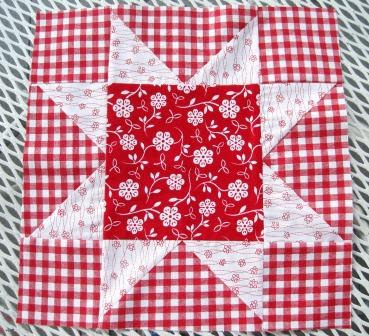 They'll probably end up next to each other ultimately. I really do love that center fabric, but it is just SO red compared to the checks. Oh well. They can't all be winners. And my points ended up pretty nice: 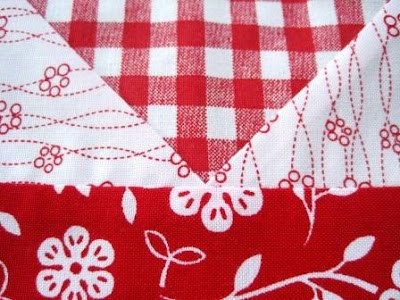 I can't wait to have more blocks done so I can lay them out and get a better idea of what the finished quilt will look like.

Before I say 'Later taters!' I just wanted to remind you of a couple things:

The Crafty Clearout Giveaway ends tonight! If you haven't tossed your name in do it now!

Have you voted yet? I've got a blurb in green just under my header and the voting button is at the top of my sidebar - I'd appreciate it muchly if you could toss a vote my way!!

Have a fantastic Friday! I'll be back tomorrowish with the giveaway winner. Good luck!
From the convoluted brain of Bethany at 8:00 AM