Ladybug Totes and Other Thoughts

What up, citizens? How goes your weekend? I got a good bit done--got a haircut, got everything for all upcoming sewing orders, helped shampoo the upholstery, went shopping for crafty inspiration but only came home with some elastic for stretchy pockets, and got some sewing in. Oh, and I crocheted a bit. I'm satisfied.

Changing directions now... Around Thanksgiving my cousin handed me some fabric and Simplicity patterns and asked me to make her a few bags. I finally got around to it, but I blame that on the fact that I didn't have the lining fabric she had picked for it. Yeah, thaaaaat's what it was. This bag is so not me. You know my tastes are usually candy colored and fun, and this was anything but. But I still like it, if that makes sense. I've said it before but that's why I like custom orders--it gets me out of my comfort zone.

Two thoughts kept going through my head while making this one. First was this line from The Big Bang Theory: "Interesting. You're afraid of insects and women. Ladybugs must render you catatonic." And "When people say one smells like an old person, that smell is the same as tapestry fabric. So old people probably don't have a smell. They just have a lot of tapestries." That one was from my own wacky brain... Because seriously--every time I picked this fabric up and adjusted it, pressed it, whatever, it gave off a whiff. Just to make sure when I went to Joann's yesterday I smelled the tapestry fabrics, and they seem to have an aroma about them.

ANYway, the first one was a huuuuuuuuge tote bag. I mean, wow. It's big. But it'd be perfect for a good-sized yarn project for sure. I almost cried when I saw that the lining was that acetate stuff that melts easy. I like the look of it, but I do so hate working with it. Between the shredding and the shifting it drives me batty. Even with interfacing. I commend those who work with it regularly. 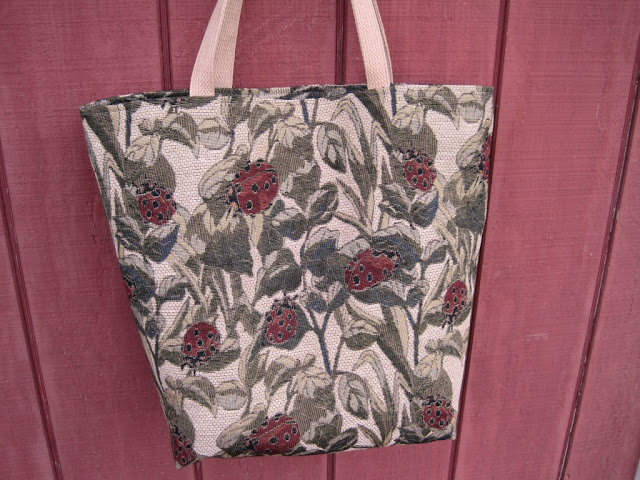 It's not crooked--it's just the angle at which I'm standing. 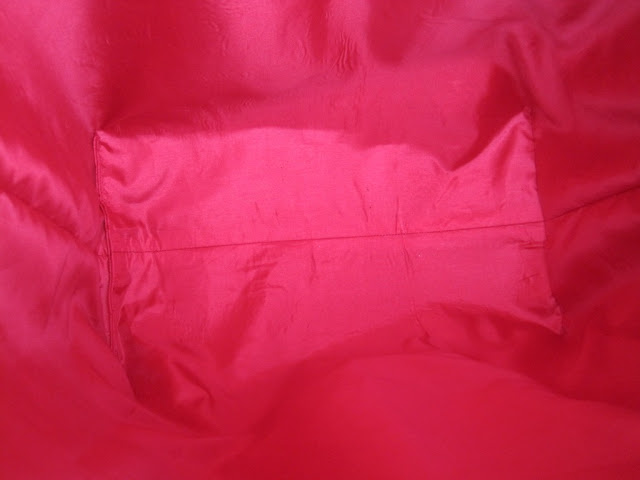 Because the bottom is a roomy seven inches deep, I left the open seam for turning in the side instead of across the bottom. Finished off it's hardly noticeable tucked away in the corner like that. I think I'll try that on all other bags that will let me turn them out that way. 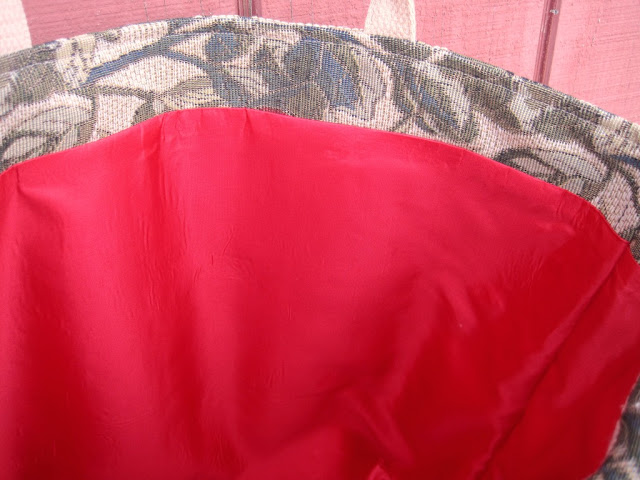 I had concerns about the size of this bag and the stress on the thin acetate due to the handles, so I cut the inside a few inches shorter and added a strip of the tapestry fabric at the top. It seemed to work out pretty well. I had no idea what to do for handles. I was going to do the nylon stuff they use on duffel bags, but then I saw a roll of stuff called 'belting.' It seemed skimpy for a belt, and for handles as well, so I sewed two layers together and stitched them in like normal. 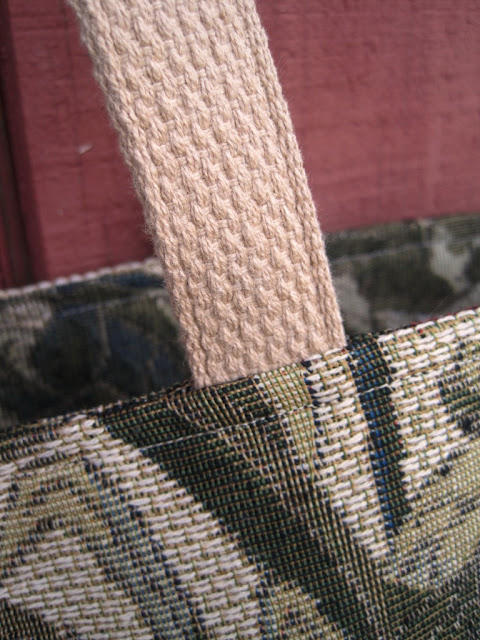 I like how they have a little bit of texture and really seem to blend in with the texture of the bag. They were the perfect length, which was nice since I used every last inch I had. Don't you love when that happens?

The second bag she wanted was a drawstring bag. The top (in the pattern) had a scalloped edge, so I used that. It proved impossible (for me, anyway) to marry the thin lining and the thick outside with all those curves. It just would not lay flat. I hacked off the scallops, and made a plain bag. I'm hoping that's ok, because I used a lot of naughty words before I called a redo. 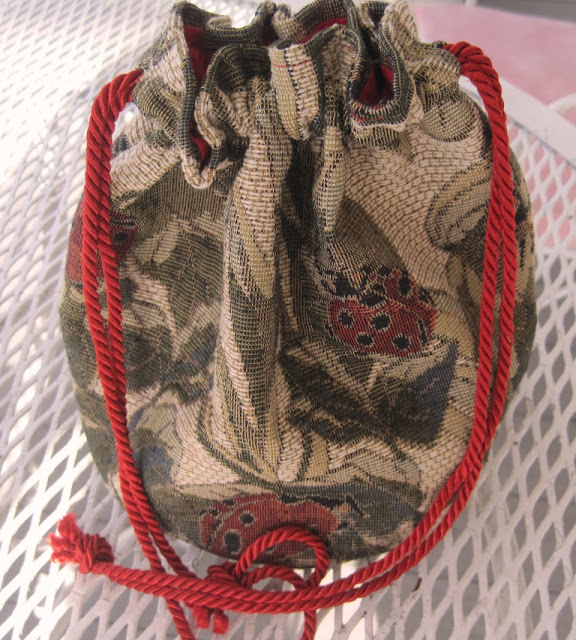 I had a migraine for about three days this week, so in that fog my brain was in I neglected to tape off the ends of this cord before I cut it and it unraveled into one heckuva mess. Luckily, a store near me sells really nice fabric and trims at a discount. It's a hit or miss kind of place, but I scored a direct hit on the above handles. They were skinner than the ones I had mangled so they move through the channel a bit easier, and I sewed the ends so they won't unravel if the knots come undone. 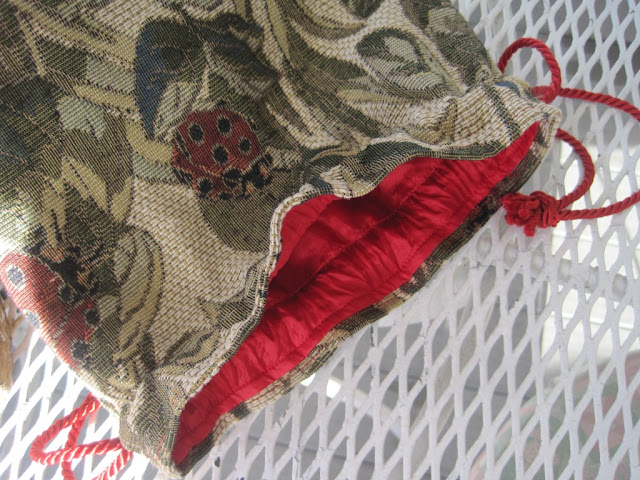 If I didn't have such a beastly headache I would have remembered that I have Jane's Drawstring Pouch pattern. And I would have used that instead of the pattern I had. Because hers is much better. It's funny--when I first started sewing I would eschew independent patterns and think the big pattern companies knew better. After sewing for several years now, I find independent pattern-maker designs so much better, for several reasons. No annoying tissue paper pieces. They usually let you sell from their patterns. They've been tested and usually work really well, and if they don't and you ask about it you actually get a solution or a fix of some sort (possibly a reworked pattern). The big companies actually write on the envelope "we're not responsible for mistakes in this pattern." I always wondered "Then who the hell is?" Plus, their directions and pictures are infinitely more helpful than what I've found in those envelopes. I'm not including all big brands in this assessment, but most definitely leave a bit to be desired. I have learned so much more from blogs and regular folks sharing their wisdom than I ever did from that drawer full of patterns I have.Which do you folks like better - indie or corporate patterns? And if you've got particular companies you like let us know in the comments so we can check them out.

Meanwhile, I'll be linking up here:

From the convoluted brain of Bethany at 8:33 PM