What up, gang? It feels weird not to have posted all week, but the holiday right in the middle messed me up, and today is like a second Monday so I'm thrown a little off in my normally very schedule-oriented brain. It has been so stinkin' hot here that I haven't been able to stomach the idea of sewing anything, as that would necessitate the iron being on. So Lola has been getting a nice little rest. I was working on a handbag over the weekend, but the pattern was rot, in my opinion. I have never seen such twisty instructions and less-than-helpful drawings. I decided that this bag, which was looking much worse for wear due to what seemed like non-stop figuring-it-out-fiddling, was not meant to be. I salvaged what I could and threw in the towel. I don't feel the least bit bad about it, either. I do believe I've made enough bags (both my own and through others' patterns) that I can tell what works, what makes no sense, and what is pure insanity. So that's that.

Other than a few fairly quick orders I haven't got too much going on. Having a project in the works helps me keep my head on straight (I'd like to believe), so I figured that now is as good a time as any to finish up those little things I forgot I had laying around. I've got a quilt to finish, a ziploc bag of crocheted roses whose purpose needs to be figured out, and a ton of quilt blocks to figure out what I'm doing with them. But first and foremost, I needed to finish my rainbow ripple afghan.

I started stitching this up back around Christmas, and worked on it as I could in between handbag orders. It was one of those projects where you know it will take a long time and you don't really care. As each row was added and each color changed I wished that this would go on forever. I actually finished up the last row weeks ago, but it has been sitting, rolled up in my project tote, since then, patiently waiting for the ends to be woven in. I started working those in Sunday night. And then some more on Monday. A TON on Tuesday night while I was watching 'Gettsyburg' with my dad. And the last few rows last night as fireworks were going off. So here it is, fresh out of the dryer. Deliciously soft, crazy bright, and perfectly sized for a veg-out on the couch. 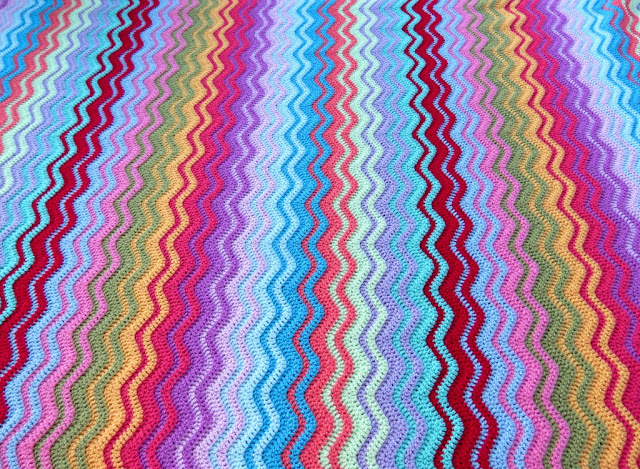 Being made of sport-weight instead of worsted weight yarn makes this blanket just the right weight. It's not dreadfully heavy, but is just the right weight for keeping away any kind of chill. There are three full repeats of each color in there, with just enough left of each for a little somthin' somethin'. 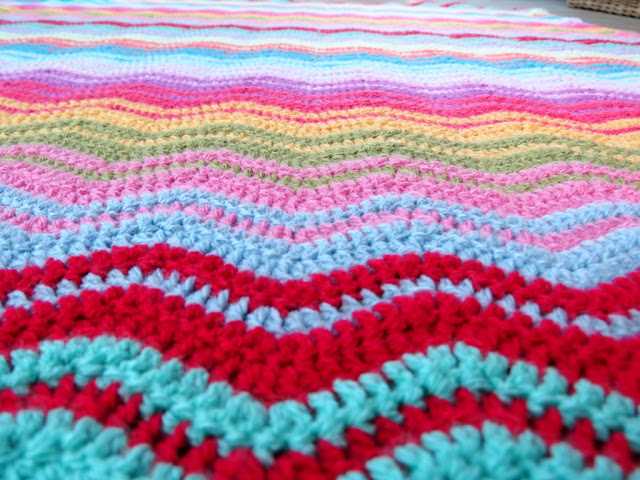 I think the red is my favorite color (surprise surprise!). Since I adore bright red with aqua/turquoise/light blue this was the only section I forced into existence. Everything else just sort of grew randomly. There were a few colors that came with this yarn collection that I didn't use for this but that I will certainly be using for other things. I just couldn't get them to fit anywhere. 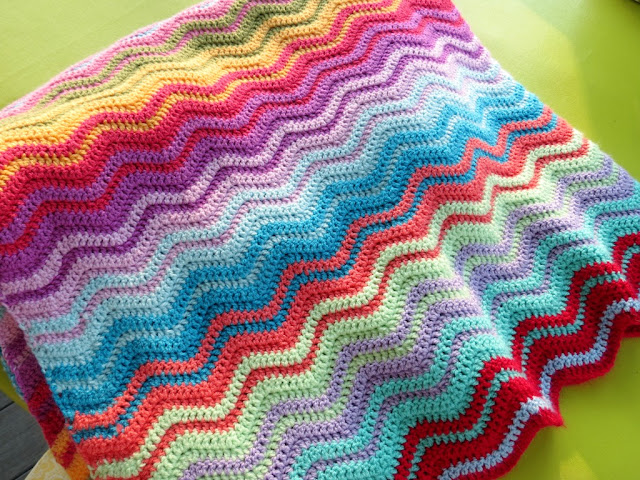 I wanted to immediately snuggle up under this, but we're having trip-dig temps here and just looking at it was making me sweat. Only I would decide to finish an afghan in time for our third heat wave (and it's only the beginning of July! Oy). 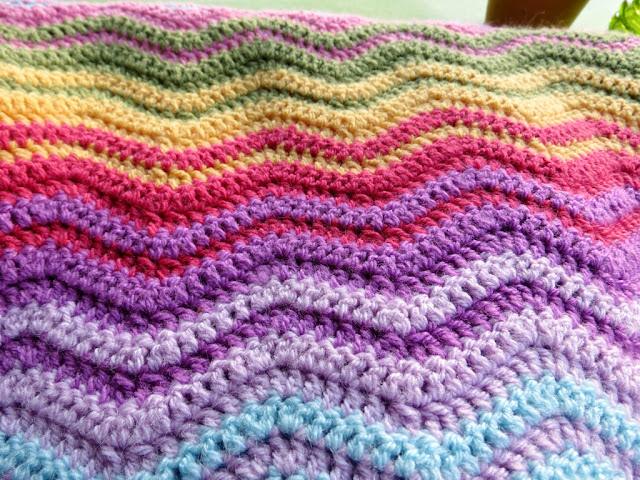 I think my favorite part is how the interlocking ripples give it a bit of a 3-D look. Lest someone calls me out on it I'll admit right here and now that I in no way came up with this. I saw that Lucy at Attic 24 was doing this pattern, and I immediately fell in love with it. So I borrowed her idea and stitched away. MUCH better than the plain ripples I was planning on--so much more visually interesting. 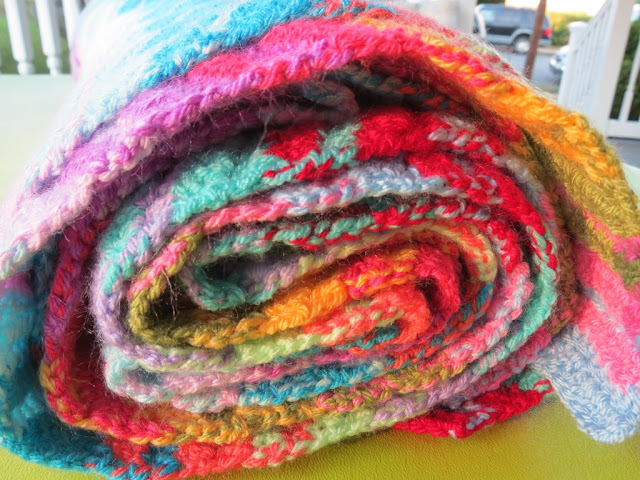 The ends don't thrill me. There were literally a gazillion and seventy to weave in, leaving the edges a little stiffer than the rest of the blanket. The washer/dryer softened it quite a bit, so much that I think I'm the only one who can feel any difference. I'm mostly pleased that my ends stayed all nice and neat, right where I put them. 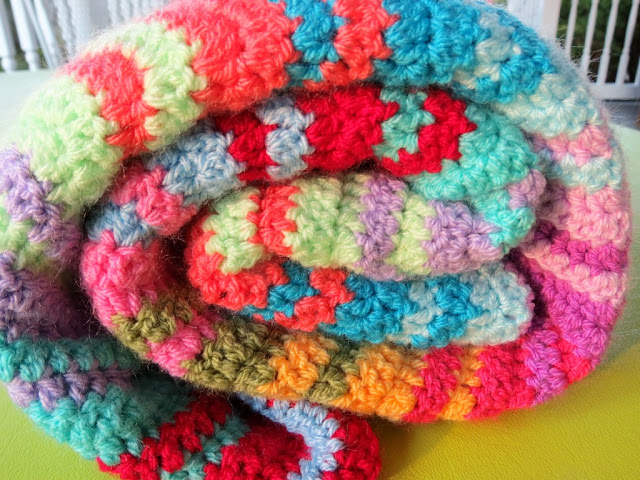 The end of this one is a bit of a paradox--I wish it could have gone on and on but I'm so happy it's done. I do believe that the next time I attempt such an endeavor I will be weaving in those ends as I go.