'Allo! How's tricks? I'm looking forward to the weekend. First, I'm this close to finishing a quilt top that has stagnated for months and months for lack of the motivation to cut fabric into squares. To be precise--to cut a jelly roll into squares. In other words, I am too lazy to lay strips of fabric on a gridded cutting mat, cover it with a gridded ruler, and apply pressure to a rotary cutter. That's a special kind of lazy. But the squares are cut, and once those are sewn together I've just got a few long strips to sew to finish the border and that much is done. Quilting it is another story for another year. Second, Joann's is opening a store about ten minutes from my house, and that opening is tomorrow. Do you know what that means? It means I don't need to plan a block of time to try to find a weird color of thread at a store that is a bit of a drive to get to; I can just stop on the way home from work or run out during lunch. It's going to be sweet. Third, Friday night is pizza night and that's yummy. Yeah, that list kind of tanked at the end, I know. Anyhoodle--here are some pics. 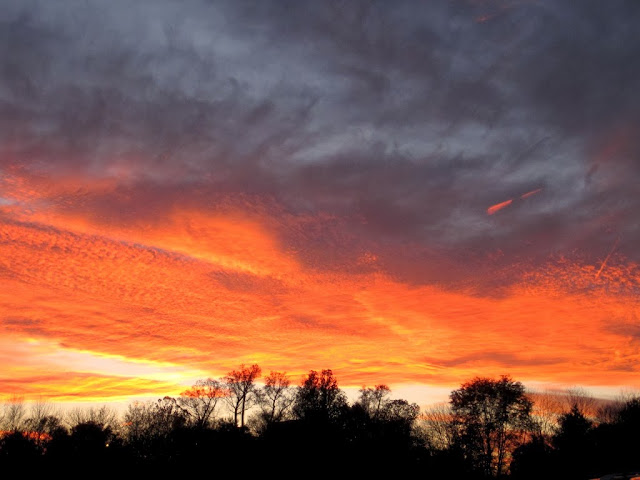 Now that I leave work at that perfect moment during sunset I am treated to skies like this. In a week or two that will be done with until about February as it will be dark when I leave. Which I love. But still--looks like a fire in the sky, no? 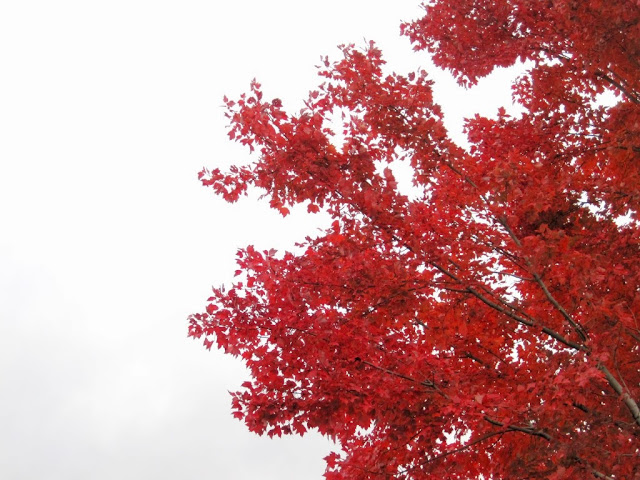 We have waffled between blue and gray skies all week. The leaves are brilliant against the blue, but it's been grayish in the morning. Which also provides a nice contrast for my favorite leaves--the bright red ones. It's a good thing I don't have an office at work, as our building is surrounded by beautiful landscaping and plenty of trees. I would sit and daydream all day. And forget about productivity if it were to snow. I suppose I will be a little girl forever... 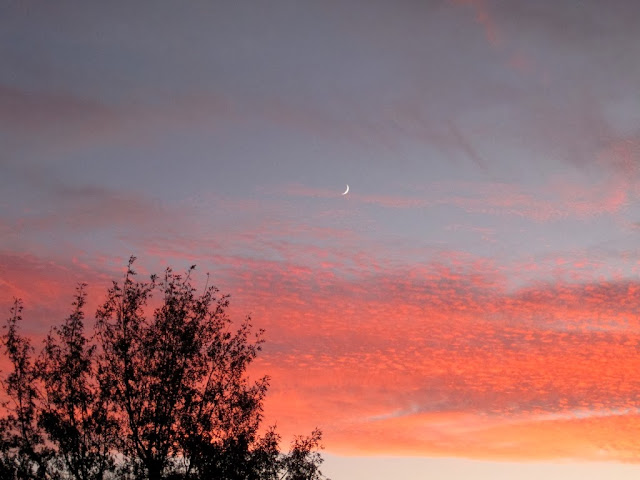 Anything else to share? Ummm....oh! I used a double needle on my sewing machine for the first time ever. Holy cow is that crazy! I usually sew two parallel lines to mimic a storebought shirt, but this time I decided to be wild and crazy. You would think the threads would get tangled and do bad things, but they just zip through and you end up with a beautiful hem for no effort. I must try that more often as it looks like I can use the double needle for some of the decorative stitches on my machine... Other than that, I spent a few nights folding and tying and pricing up most of the goodies in my shop. My aerobics instructor told me to bring her my stuff and she'd push it during all her classes, so I was prettifying everything for display.  At least this way I can move it on out without worrying about packing and shipping and the post office messing things up, and make room for new makes to sell.

So that's about it. I have been excited to go to bed this week as I bought myself new pajamas and they are so supremely cozy I want to get to sleep just so I can wake up in the morning in that sweet spot of warmth and coziness that exists only in the early morning. That's sounded really scrummy right now, so I'll say good night and see you soon :)
From the convoluted brain of Bethany at 11:19 PM