Pretty Maids All in a Row

Hello there :) I certainly haven't been blogging much lately and I don't like that. I'm hoping that changes as the calendar turns towards my favorite part of the year. You know how you have something you're kind of not feeling like doing because there's something to it you've never done before, but you can't do much unless you do that first because you promised? So everything is kind of stagnant? That's where I've been. And now that I've done that thing I can move forward and hopefully have more projects to share with you, especially since we're in the countdown towards...I'll just call it the end of the year so as not to elicit groans.

This week I finally cracked out my last custom order for the year (I hope). I was asked via my wee online shop to make some evening bags for a wedding. I was a little nervous as fancy fabrics make me clenchy, but of course I said yes as frame purses are one of those sewing projects that look kind of eh at the start, but end up all wowsers. After a bit of back and forth I had all the details nailed down, and I finished them up this week. Five large frame purse for the ladies, and one smaller one for the flower girl. 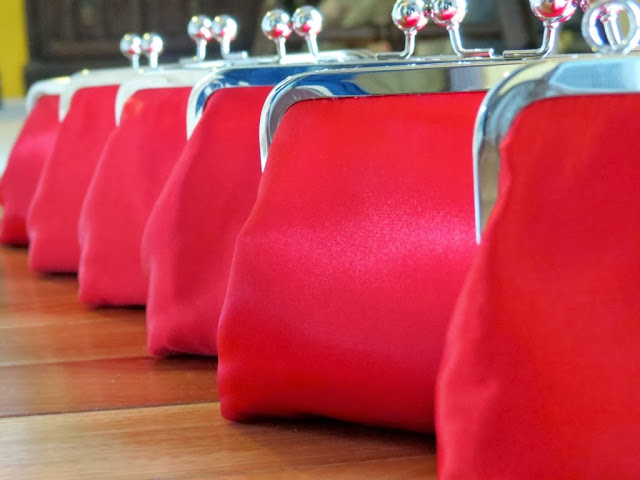 These were the most perfect shade of red. I was walking around the store with my phone with her color reference on it matching it up to different satins, and this one was right on. Like...right on. 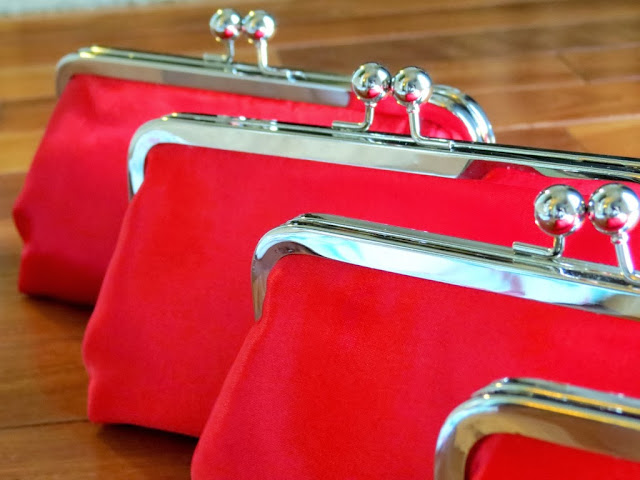 I usually use a six inch frame, but these are eight inches wide. When I make the six inchers I feel like "Oooo, these are a great size" but they seem so teeny compared to these frames. Glad I sized up because this is a perfect perfect evening bag size--everything will fit without any smoosh and bulge. 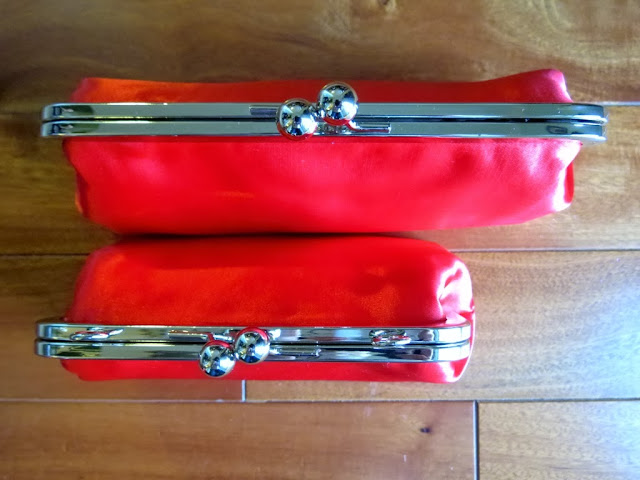 These have a bit of interfacing in them. The outside satin was quite sturdy, so I only put fleece on it. The lining was a bit flimsier, so I used woven fusible on that and it ended up feeling how I hoped it would. I then used some sew-in Pellon craft interfacing #40. I was in the store waffling between forty and fifty and I'm glad I chose this--I think the fifty may have ended up a bit too stiff. These are soft and squishy but structured and don't sag under the weight of the frame. It took a lot of tries over the past few years, but I finally found interfacing combos that work well. 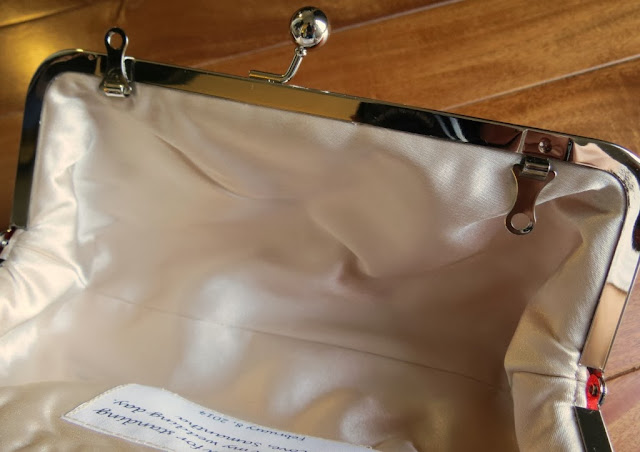 The linings are all in champagne (though the photo shows ivory). The larger frames have flopping loops--if you want to attach the chain they swing up, and if you don't they'll fold to the inside of the bag out of sight. The smaller frame has permanent loops. 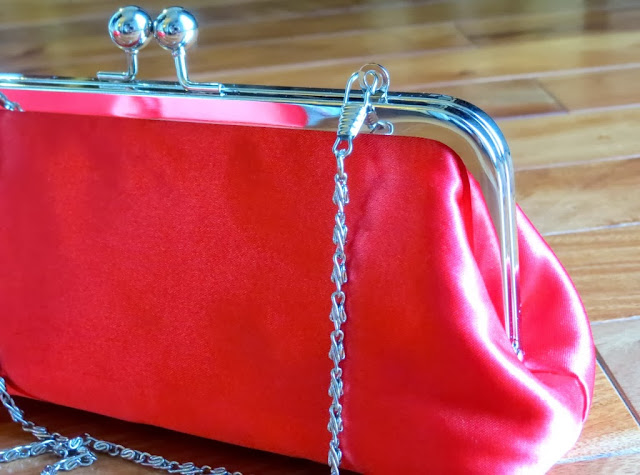 That extra sparkle just makes them seem so much better. These simple clutches will be perfect for after the wedding, too. Everyone should have a red bag in their closet, yes? But the lining is kind of special. She asked me to include a personalized tag in each one with a simple message to her girls. 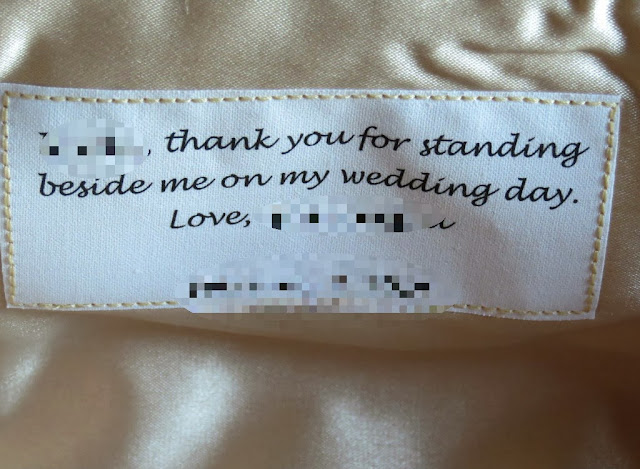 THIS is the part that had made me nervous as I had never done it before. There are oodles of tag-making resources online, but they would cost way too much. Instead I found printable cotton on Amazon. I worked up a few examples and she picked the font she liked. I ran them through the printer and let them sit overnight before I touched them again so there was no way I could smudge the ink. One side has adhesive, so you lay that on your fabric, press it, and stitch it down if you want. I was concerned the adhesive might not work on the satin but it was delightful--even the corners didn't want to peel up. I added the stitching so it wouldn't look too plain, and I think the dark print contrasts really nice with the lighter colors. I used the triple-stitch function on my machine to make the stitches stand out more. 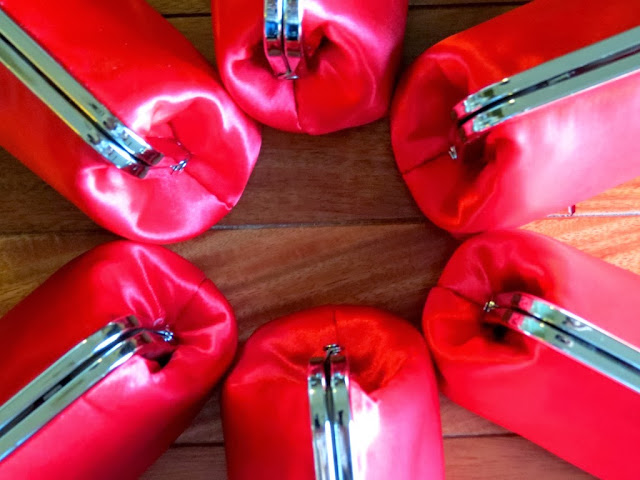 So that was my sewing for the week. I am normally a marathon sewer, but I've found that lately that leads to me getting a bit of a headache from my shoulders being tensed up. What I've been doing is setting aside a limited amount of hours during which to sew, and then I work on my granny square afghan. This way I'm making progress on a few fronts without sacrificing NOT having a headache. I really must get back to my yoga classes, though. My body misses those.

Here's hoping you have a cheerful week! Later, taters!