When I have to figure things out I delay that project. Terrible, I know. But there's always that feeling of "If I can't figure it out I want to know later rather than sooner." But, as with most things like this, once I get started it's usually not as difficult as I imagined it would be and I actually end up feeling quite smug when I find that I was able to figure out. Smug enough that I put my hands on my hips and strut around with a smirk on my face like I just discovered the secrets of the universe and am on track for a Nobel prize.

So, back in January my friend Lisa plopped a bag on the table at lunch (we work together) and said "Jaime wants to know if you can make her a new one of something like this." Jaime is her sister, who I went to college with, a tidbit we discovered when she came in for lunch one day and we were both like "Hey! I know you!" Anyway, I was asked to please not judge this bag. It was pretty bad. Very well used and falling apart. I didn't even take a picture of it. It was a basic toiletry bag of a nice big size, with handles and zippers and pockets and all that stuff. Plus a wipe-clean lining. I got the fabric and then shamefully let it sit while I pondered its construction instead of getting on with it. Most bags like this have a gusset and separate bottom (two things I hate doing without a pre-made pattern) or require hand-sewing the lining to the zipper (which I don't like--I feel like the whole thing could just fall apart that way, even though that's probably unfounded). So I decided to make this a standard boxy pouch with some modifications. And that's where the "Huh?" came in. If you look at my brick pouch tutorial, the sides are boxed as opposed to the more traditional method of boxing the bottoms. This presented a geometrical conundrum to me at first. Until I took apart a quick sample I had sewn and everything became remarkably clear. It was smooth-sailing from then on. And yesterday a lovely set of goodies was thus delivered to its recipient. 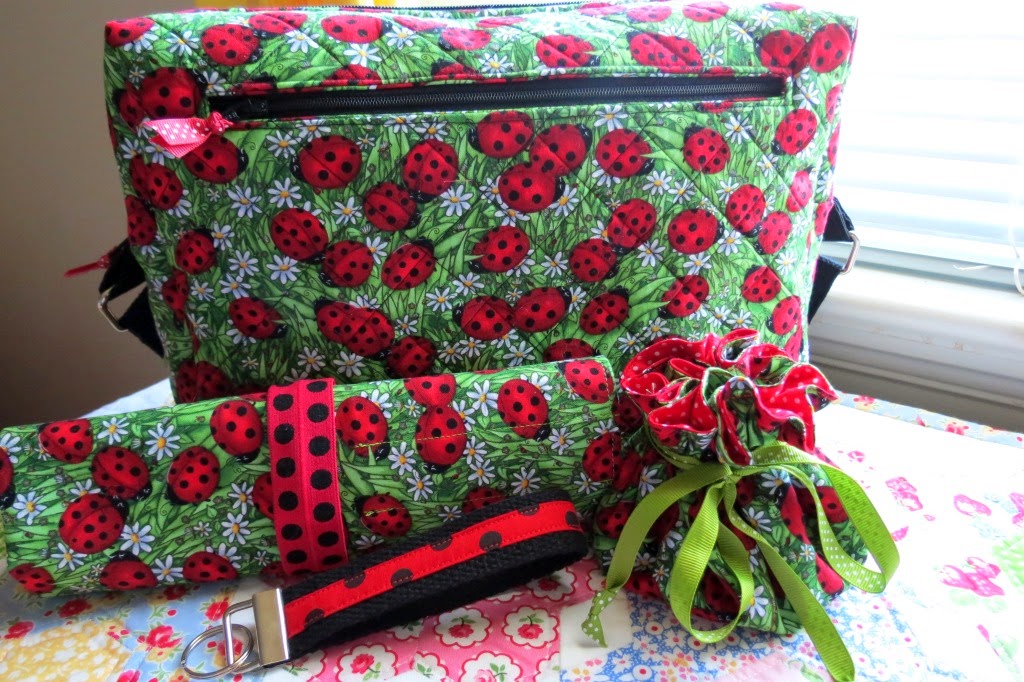 I took a lot of photos (and am going to write a lot of words because that's what I do when I'm excited, I don't shut up no matter the medium) so I hope you bear with me. I got a little excited as this all came together much more nicely than the hack job I imagined I would be performing. So here we go with it all. 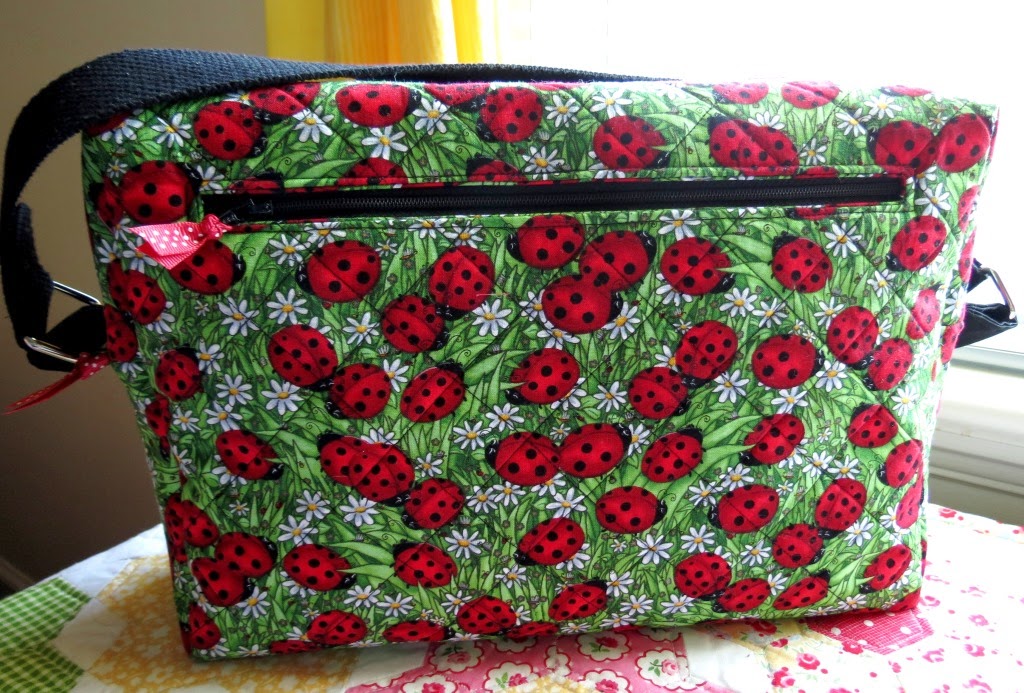 I thought I waaaaay overshot the size of this bag, but what makes it look so much larger is that the top corners are boxy instead of rounded, adding a little bit of extra room there and deceiving the eye, but really being about the same size everywhere else. That front zipper pocket was a bit difficult as I didn't use batting but used sew-in fleece for the quilting, adding some lovely bulk to the edges. But it's in there and in there well. 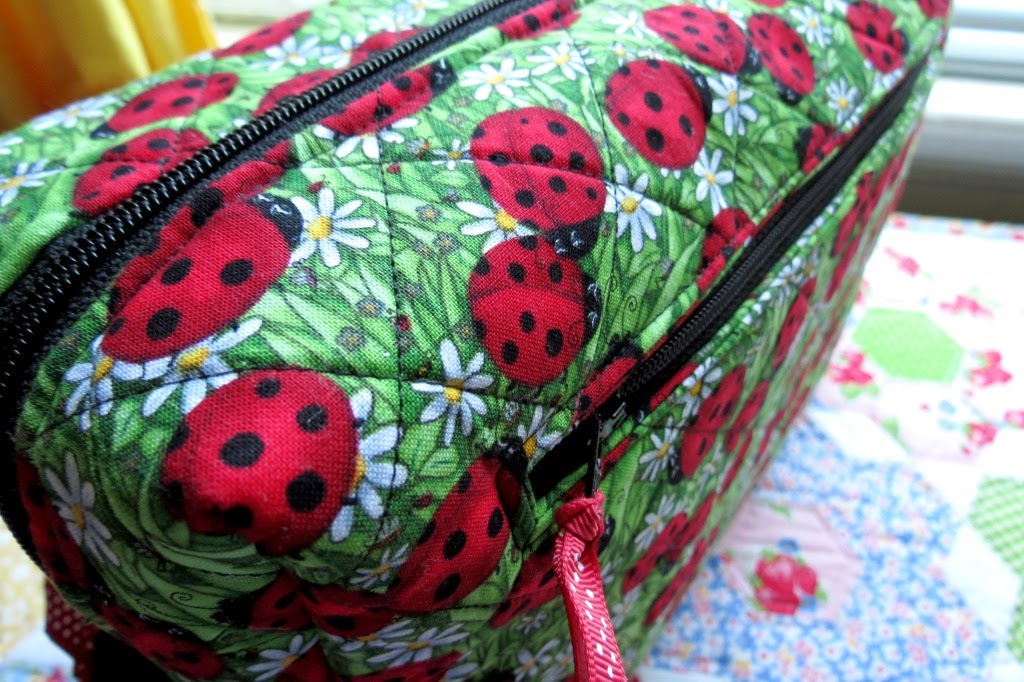 I used a larger purse-size zipper for the top zip. They're a little larger than the standard, so I had to pick it out once or twice until I got the seam allowance just right. 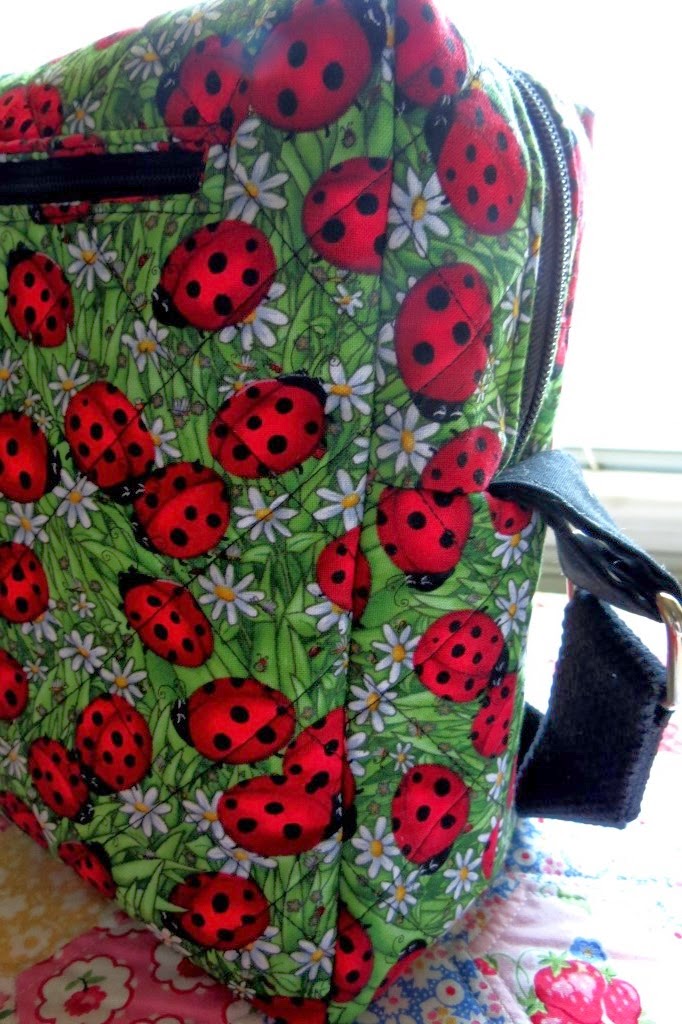 It's hard to tell from this photo, but the zipper is placed closer to the top than a normal boxy pouch (where it falls in the middle). When I went to open my sample, my hand naturally went to a spot higher than the center. Once I took it apart and figured out the math it was an easy adjustment to make (and one I'll be sharing with you as soon as I get my act together). For the most part this goes together like a normal boxy pouch, and once all the kinks were figured out it was super simple. 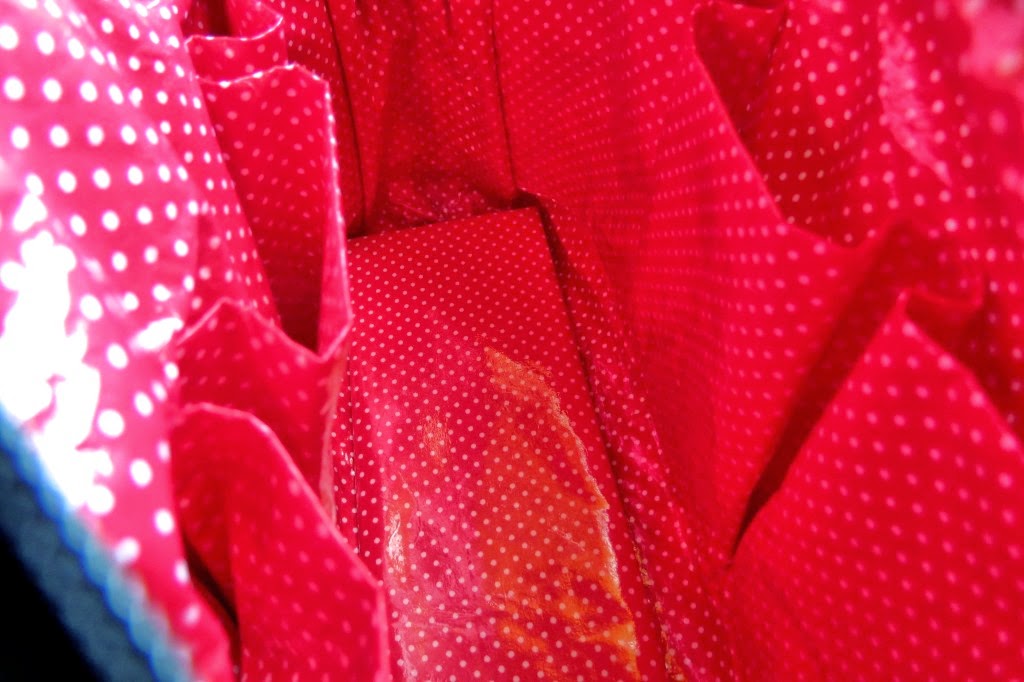 I was asked about a wipe-clean lining for this, which I readily agreed to in my naivete. You may remember my iron-on vinyl misadventures... Things didn't get easier from there. I forgot this stuff sticks. So I frequently alternated between a standard and a Teflon foot, made stitch length changes like a boss, changed my needle size, and all that. In the future, I think I'll just use cotton lining and invest in some Scotch Guard. Between prep-time and sewing time plus the added cost of it it's just not worth it (I should probably check out the pre-made laminated cottons and their pricing, but prints are limited, usually). Anyway, I'm complaining but it does give a nifty look to the lining so I may go back on my word on this one. I used the pocket from the old bag as my guide and it worked out well (after a serious talking-to with those pleats, who just wanted to smoosh out of place). I forgot about a bag base, so I wrapped some cardboard in leftover fabric and called it a day. This lining reaffirms my belief that red and white polka dots are perfect and will always look cute.

Next I had to make a cosmetic brush roll. This really was not difficult at all. I have very few makeup brushes, but my sister has many (and knows how and when to use them-can you imagine!) so I used hers as a guide to make a very simple roll. 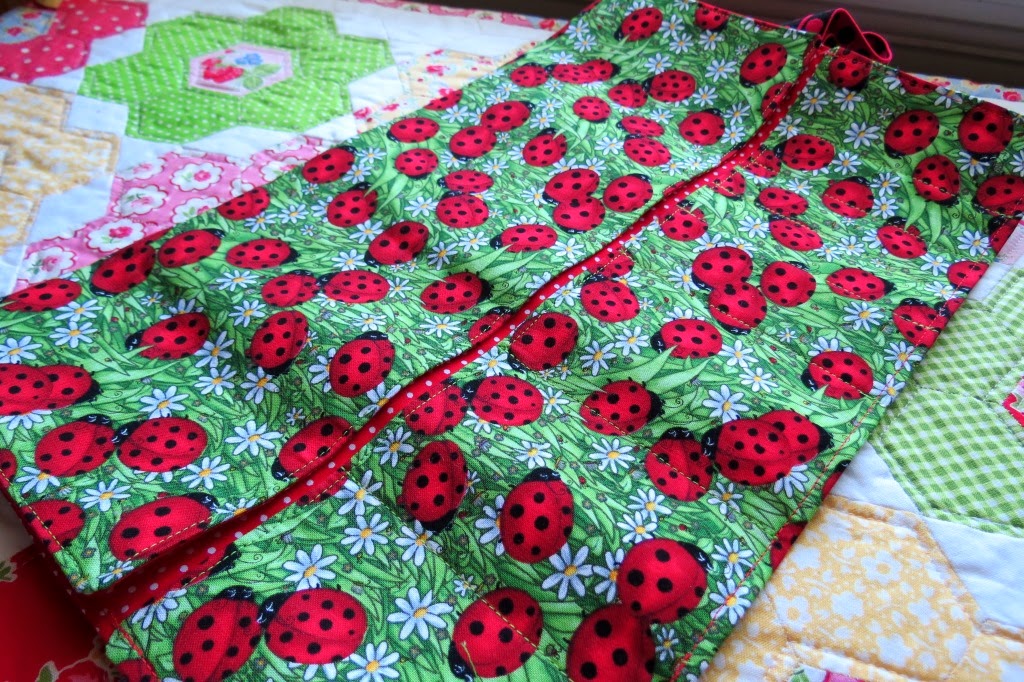 It's basically a giant rectangle with the bottom edge folded up and slots stitched into it. The top then folds down to cover the brushes, and you roll it up from there, wrapping it all in the cutest fold-over elastic that I had to buy just for this. 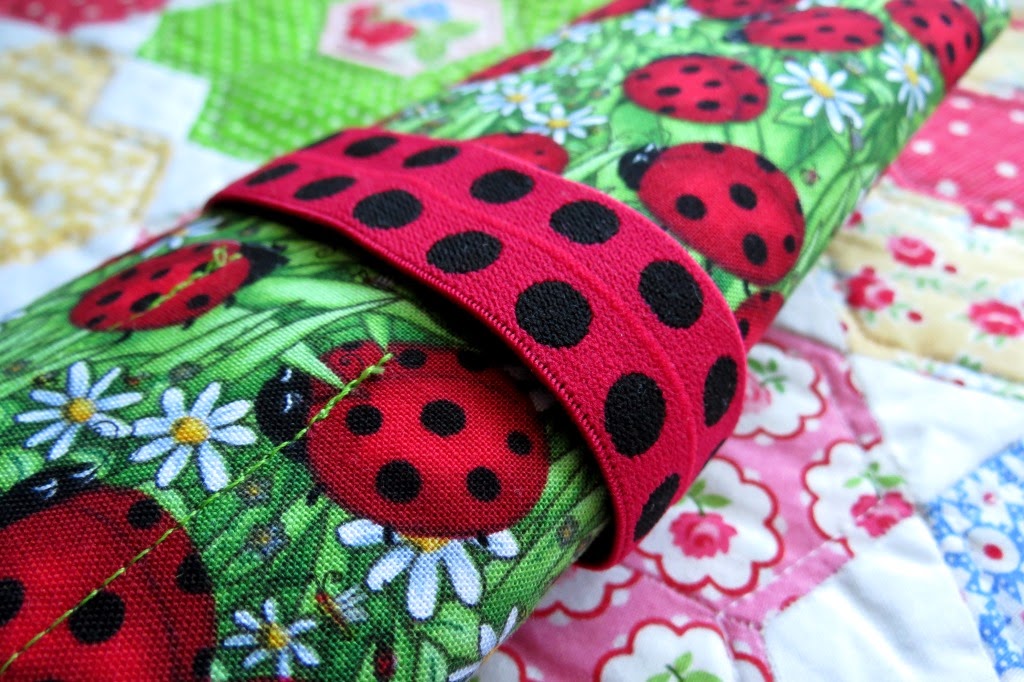 I had found a bolt of ladybug dot fabric at Joann's and bought the tiniest cut imaginable, just so I could make a super cute key fob, too. 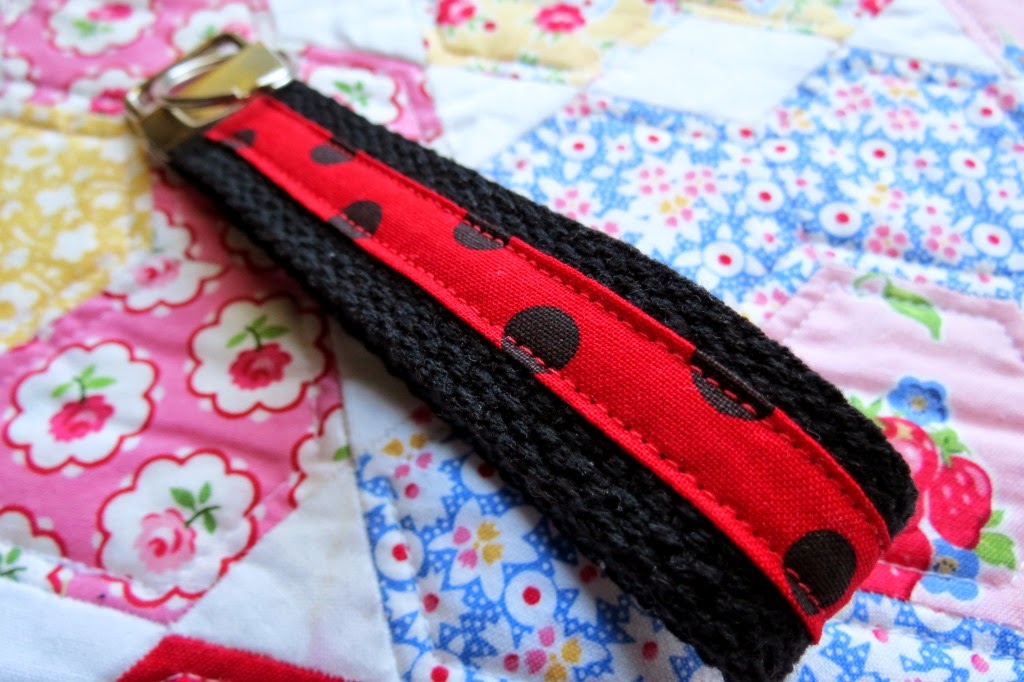 I love hardware close-ups, so here comes one. 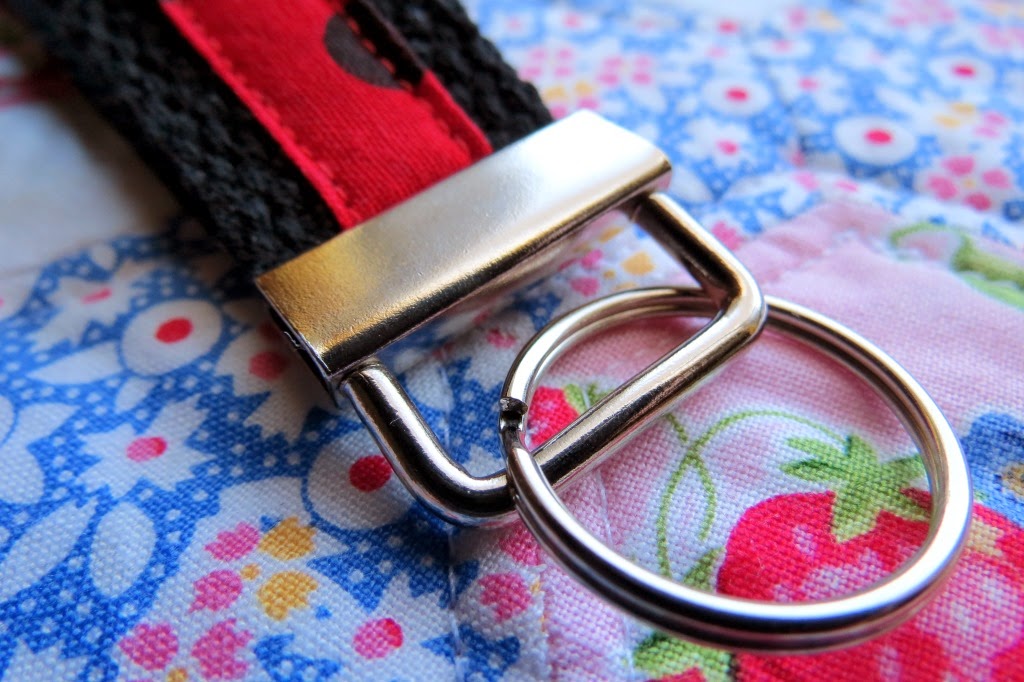 I overbought on the fabric I would need as I had no idea how I was going to make out, so I decided to make a jewelry bag, too. This might be my favorite bit of the whole lot in its cuteness. 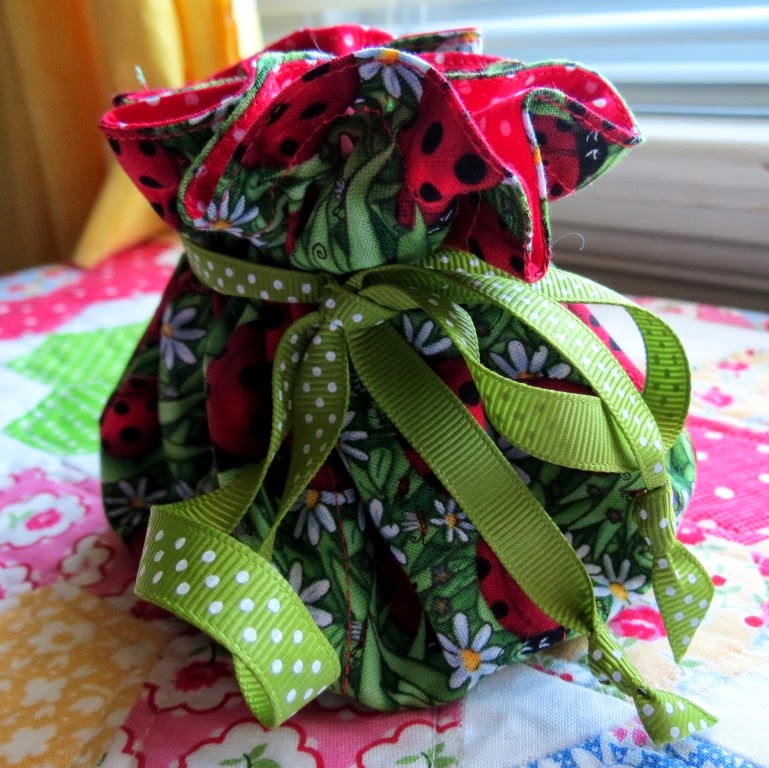 It looks like a little drawstring pouch, but when you untie it and pull it open you'll see the most adorable little pockets to hold rings and earrings and other little bits, and the center of the bag will hold larger things or more rigid bits (like cuff bracelets). Here is the tutorial I used. 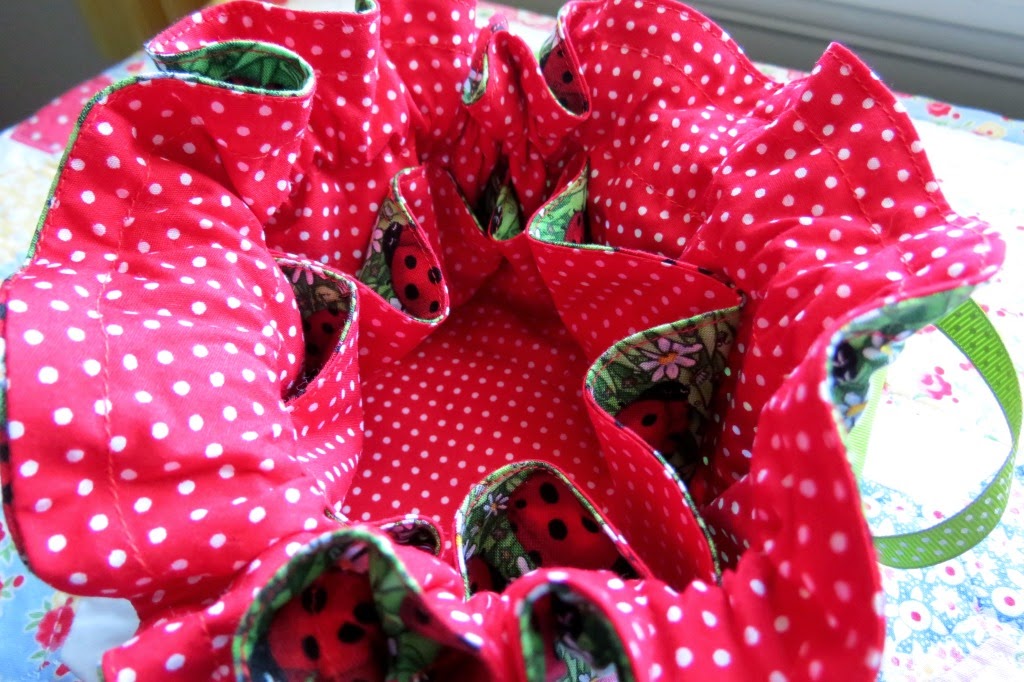 I had a limited amount of ribbon (which was the perfect color and so I absolutely needed to use it), so I only made the one opening. This thing opens up to lay flat, which no one is going to do, so I could have made two and divided the ribbon and it would probably be fine. Oh, well. 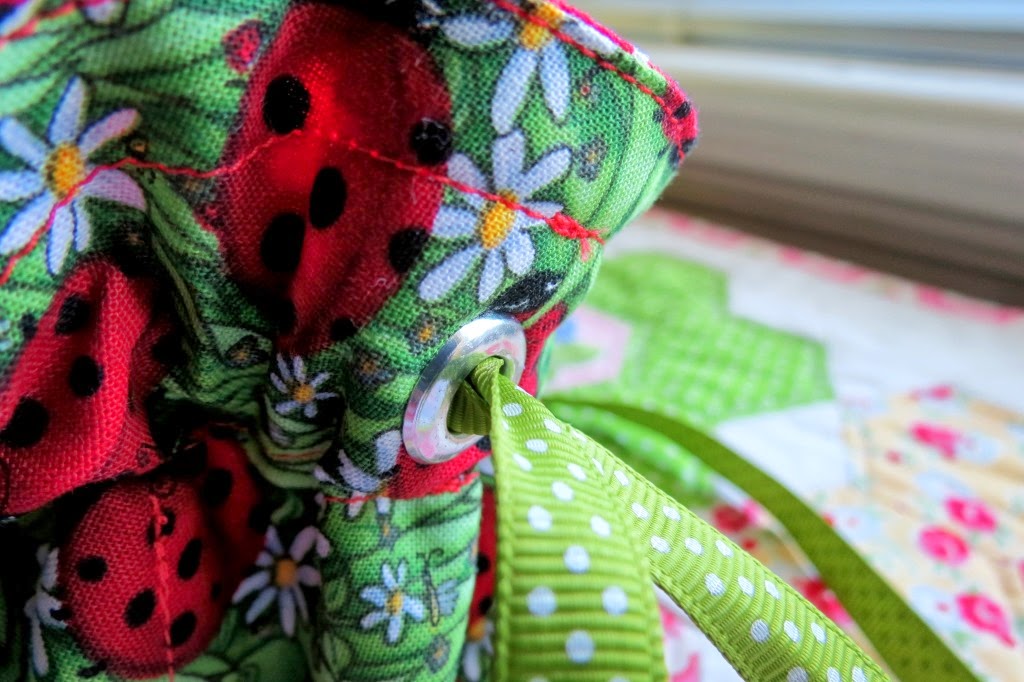 Oy. Still here? The jewely pouch, makeup roll, and key fob could all be made in an evening. The jewelry bag looks more intricate than it is. The bag is a little more involved (but not difficult at all). Other than some interfacing choices that I questioned as I went along as they gave much more stiffness and bulk than I had anticipated the only change I plan on making to this bag is the strap. I couldn't figure how I was going to do the straps I wanted as well as the zipper pocket, but the answer hit me well after the fact, and that's what I'm going to proceed with before I call this a finished pattern.

If anyone is interested in a sew-along, leave me a comment and I'll make it happen. This is a great sized bag and could be used as a small craft tote, a lunch bag, a toiletry bag, a travel gadget bag with pockets for chargers and room for tablets and cameras and stuff...the possibilities are many. So let me know and I'll feel motivated to make it happen sooner rather than later.

Thanks for sticking around for the entire month it probably took to read all my blather, but this one made me excited in its cuteness when it was finished. Have a good rest of the weekend!

And here's one more picture as it's the only one I didn't use and I don't want it to feel left out: 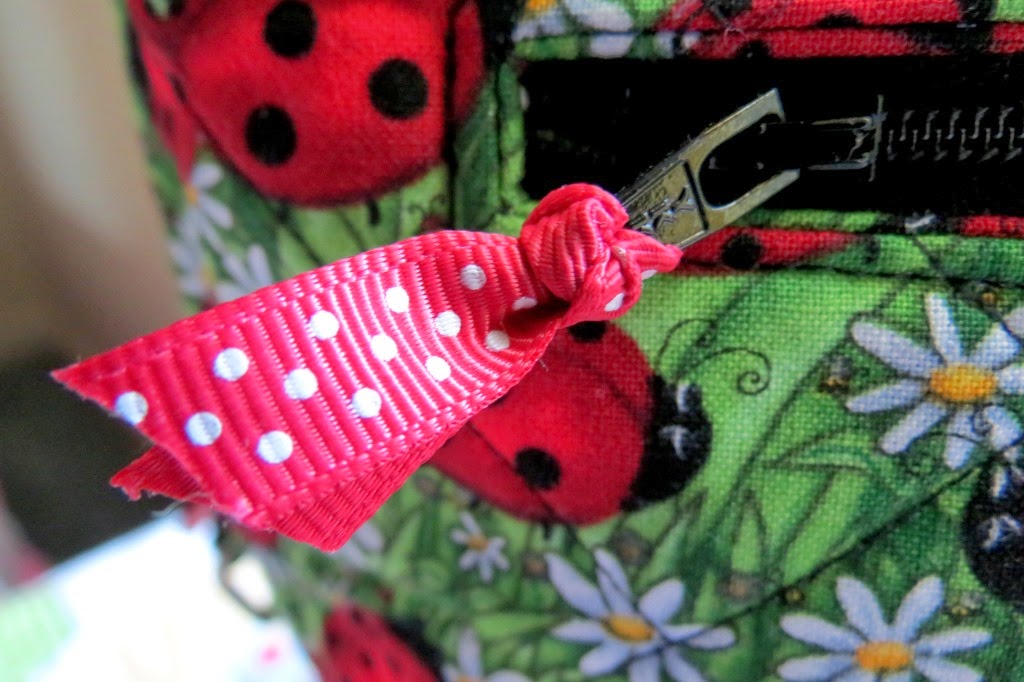 From the convoluted brain of Bethany at 1:03 PM