If the Third Time's the Charm I'll Stop After the First, Thank You 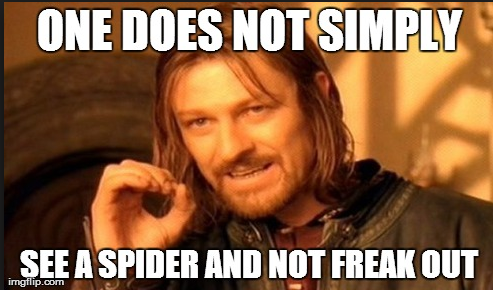 If you've been here for any length of time, you probably know that I have a deep-seated fear of spiders. I can squish most bugs no problem. Spiders make me scream and flail and become an absolutely nonsensical version of myself. For reals.

New furniture arrived recently in the form of a sofa and loveseat. Neither of them have that little skirt thingee around the bottom. I saw a dark little something under one that I assumed was dirt or fuzz or a piece of stray yarn or something like that, as it was there for two days before I remembered to get it. Thank heavens I took a closer look before I touched it with my bare hand, as it was a dead spider. One that would have been enough to make me scream. My father absolutely refused to pick it up as he thinks adults should be able to handle such matters. So I flicked it into a plastic cup and tossed it outside as a warning to other possible intruders. Other intruders obviously chuckled and said "Oh really? We'll see...." 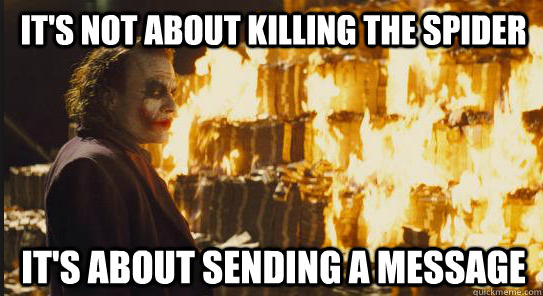 That night (Sunday) at dinner, sister Rachel caught something out of the corner of her eye, and pointed and said "I don't know what that bug is behind you, Dad, but you need to get it!" It was possibly one of the biggest spiders I have ever seen on the floor in front of the fridge (the weather strip under the back door needs to be replaced, and the theory is that it came in there). I immediately screamed and ran. Rachel picked up A-train and ran, while he's chewing his carrots and wondering what the hell is going on. My aunt followed us into the other room where we all twitched and tried not to say naughty things in front of the young 'un. My mother and sister Alicia (who can't be in the same room as most bugs, mind you) calmly sat there eating while my father squished it. 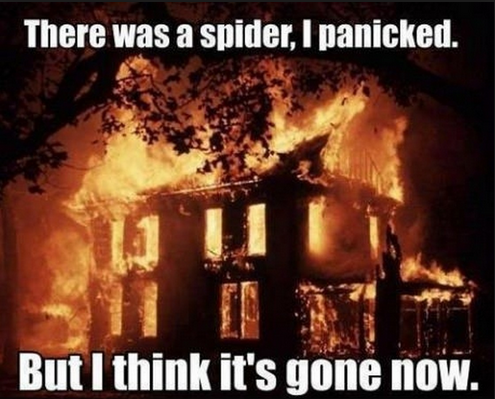 I spent most of yesterday trying to get that image out of my mind. Tonight I headed off to my yoga class. At the very end we do a relaxation sequence for five to ten minutes. The room is not air conditioned, so we open the windows. Sometimes you see a moth or a fly or something come in. So when I felt a tickle on my arm, I slapped at it thinking it was that (or a piece of my hair, which is usually the case). But when we were finished and I stood up to roll up my mat, what was there on it but a nice sized spider that look like it had aspirations of being a daddy-long-legs. On my mat. Practically spooning with me. I stayed calm (because I didn't want to look like a goober), shook it off the mat, and squashed it, all while looking like a sane person who wasn't itching to scream and run from the room.

That's three attempts on my life in three days. And to make matters worse, I can't take a certain road until after Halloween, as one of the houses has a gigantic spider display in their front yard and closing your eyes while driving is frowned upon.
From the convoluted brain of Bethany at 11:18 PM