Socks That Made Me Go Hmm.

Though that fall chill in the air doesn't stick around long (no matter how hard I wish on stars), I figure I'm in an acceptable time frame to share knitting projects (it just seems so wrong in the summer). First up is my most recent finish--a pair of socks. My sister gave me some of the most scrumptious sock yarn for my birthday in a colorway called 'Strawberry Fields' (from this shop). I went on a bit of a shawl knitting kick for a while, so these only recently made it onto the sticks (and took almost just as long to come off--oy). 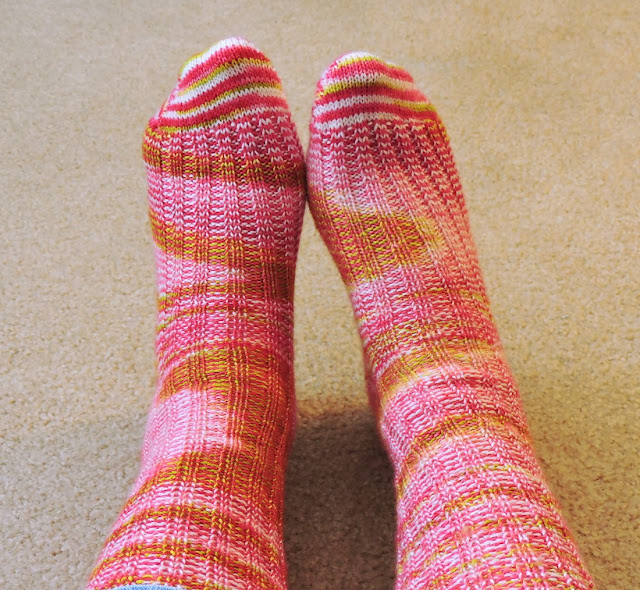 No matter what I did I could not get the colors to show up just right (why are pinks and reds so difficult to capture accurately?). But they're a dark pink, a medium pink, and a light pink sprinkled with white and a medium green. 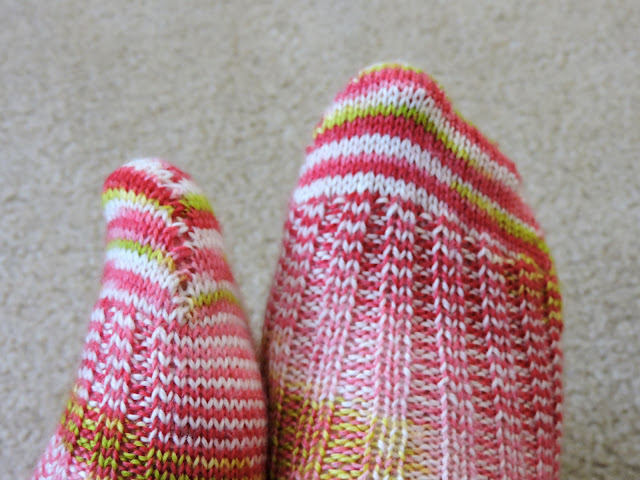 I must have cast on the first sock a half dozen times and frogged just as much throughout. I have no idea what the problem was, as the second went swimmingly. These were knit toe-up, and I used German short rows for the toes as I dislike picking up wraps immensely. I didn't do a short row heel, however--I made the gusset and heel flap and all that jazz as I like how that looks. 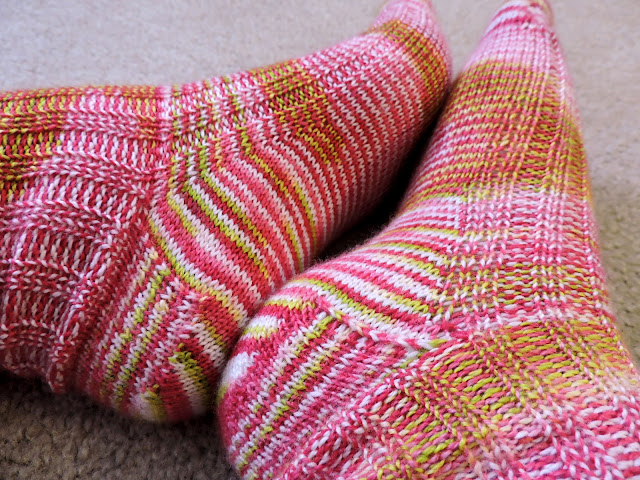 These socks fit a little snug, which is how I like them as they don't slip and slide (which is better for wear), but I think they could be a little bit looser. I used the smallest needles for the foot, and then increased needle size every few inches as I went up the leg. I used a super stretchy bind off, and they stay up nice obediently. I have a pretty dang high instep, so I should probably increase my cast on a bit as you can see the stitches stretching a bit. 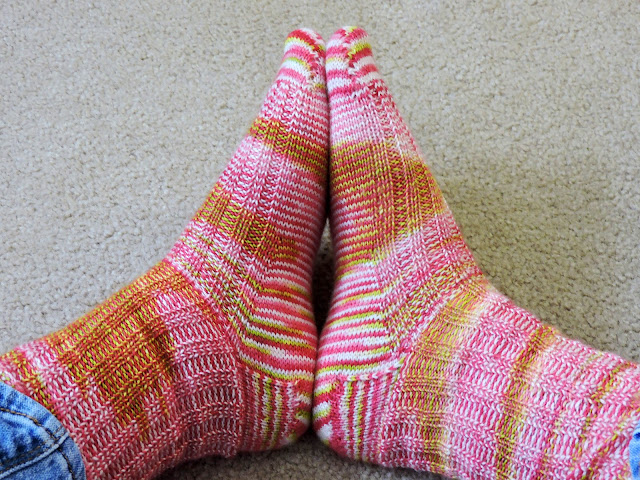 I had a small entanglement issue, so each sock ended up starting at a different color, leading to the matched-but-not-the-same quality they unabashedly possess. Part of the fun was watching how the colors worked up differently in each, more stripes in some places, more pooling in others. A math teacher I had in high school told me once that matching is for narrow minded people, so even though I super super SUPER disliked that teacher I'm going to use that point here.

I do have a question, though, for any sock knitters. I know the techniques, and the steps and all that jazz, but I struggle a bit with fit. The pairs I've made previously all seem to fit the same, even though each pair uses a different needle size (but the same stitch count). How are they supposed to fit? I know not too loose, but mine seem snug enough that they're not uncomfortable and stay in place, but do not slide onto my foot with the ease of store-bought socks (and might even be a wee bit tough to get on, if I'm being honest). I'd love to have a drawer full of colorful hand-knit socks at my disposal, so I'm keeping at it. I would just like to know what's worked best for you folks regarding fit. Thanks for any help!
From the convoluted brain of Bethany at 7:39 PM