Normally when a project takes me seven months to complete (or over a year) I like to do a 'ta-dah!' sort of post as I usually post pictures of my progress. But for this blanket, I showed you a picture of the yarn, told you the pattern I was going to use, and then never said another word about it beyond "I promise I'll show you a photo soon." I have a few pictures of it in the making; they've just been living in my camera. 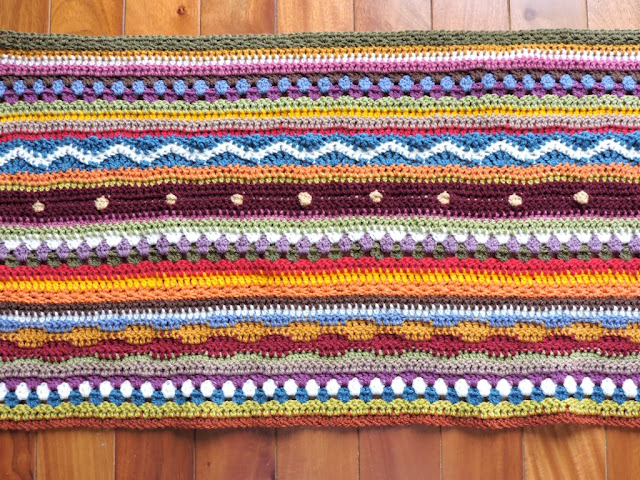 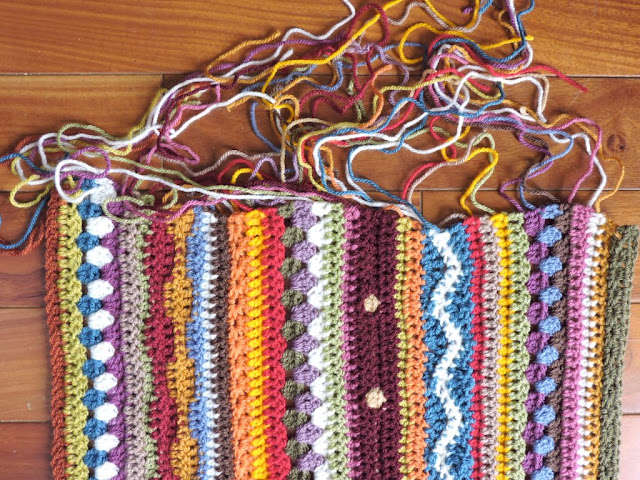 See this photo? See how wavy that edge is? I was able to gently steam it into almost-straightness, so I kept going with it (normally I would frog and call it a day). Even though I kept telling myself to keep doing that every few rows, I didn't. So I crossed all my fingers and toes as it was tumbling around in the dryer that it would come out decent. 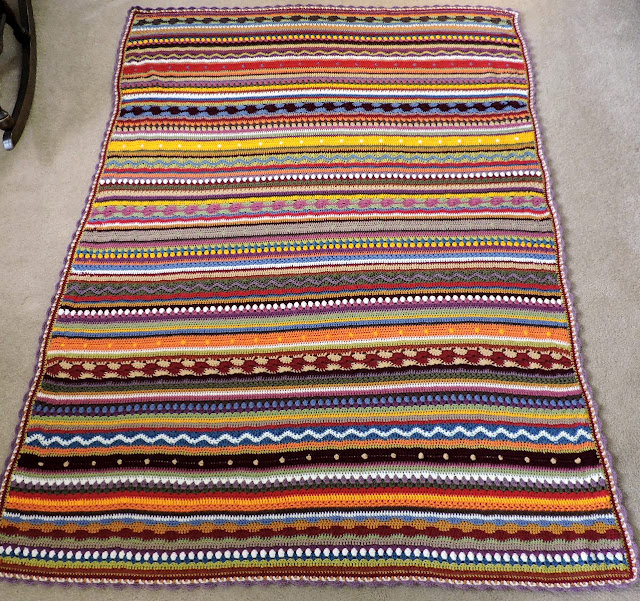 There was only one stitch pattern (those Catherine's Wheels, or whatever they're called) that caused that rippliness, but the addition of a border seemed to help pull things into shape. 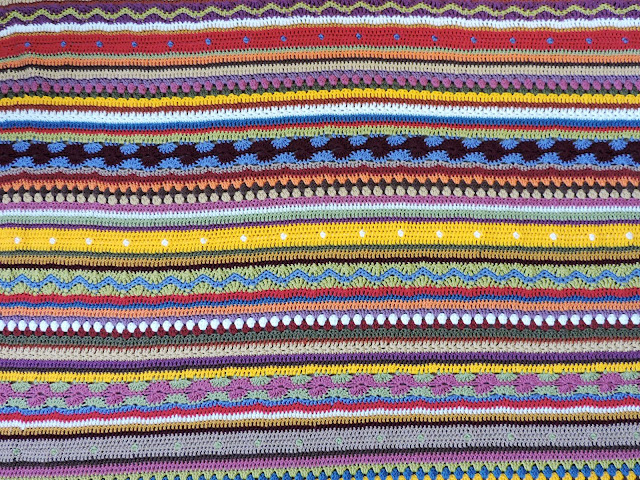 This may very well be one of the more difficult things I have ever made, not necessarily in execution but in sheer tediousness. I am almost certain I counted stitches in every single row, and quite often ripped back. Quite often. 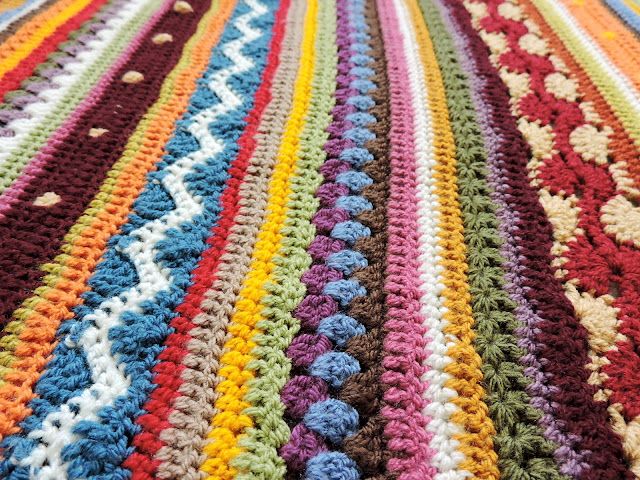 I tried to maintain randomness when it came to the colors (except for the white, which I tried to space out pretty evenly). I like the colors. I like how they all work together. I don't know if I like my arrangement. In hindsight, I think I would have liked more red, and less of the dark maroon. But that's in looking at the photos of it laid out perfectly flat and straight on the floor. Because let's face it--if it's not like this: 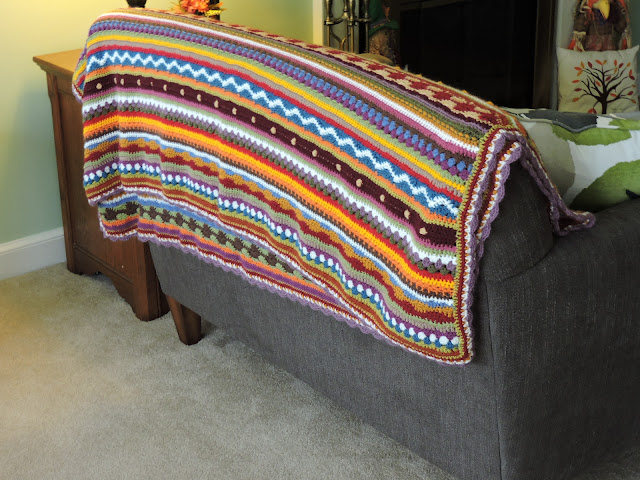 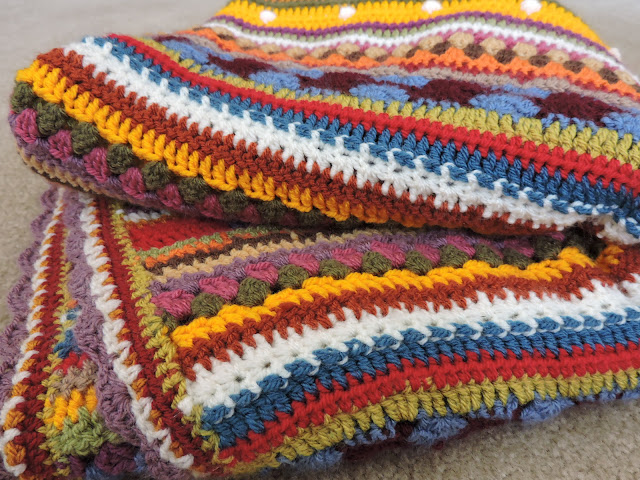 --it's going to have someone snuggled under it.

For the border, I did a few rounds of singles and half-doubles, ending it with a scalloped edge. I don't love that purple, but I had the most of it left, and didn't want a ton left over, so there it is. I was able to get the corners to look kind of nifty, even though lack of planning made the stitch count not what it should be. 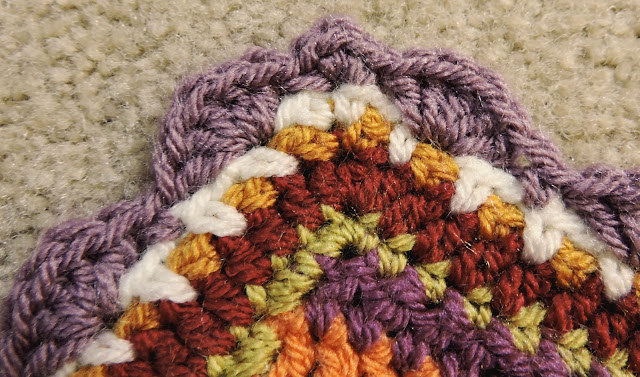 So would I make this again? Probably not. UNLESS I made a list of stitch patterns that require the same count so I wouldn't have to fudge things into existence. But still probably not. Very often I wanted to rip it out and make a corner-to-corner blanket or something, but as I wove in my ends as I went (after the first two-ish feet) that wasn't an attractive option.

It's one of those weird things. I didn't have much fun making it, but I really do like the end result. I'm still uncertain regarding my colors, but I'm looking at it right now draped across the love seat and it's vibrant and cheery. I think I have a love-hate relationship with it. I bet I'll love it unconditionally in about a week when it's not driving me to madness. 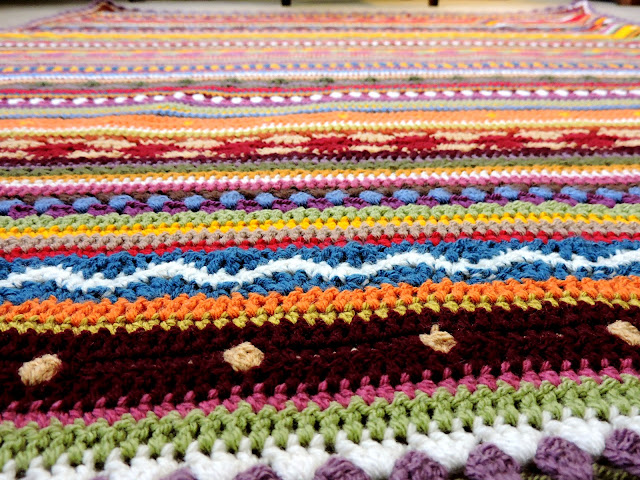 From the convoluted brain of Bethany at 7:55 PM