There's some Spanish free-styling for your reading pleasure.  You're welcome.

I'm not celebrating this holiday--why would I?  I'm not of Hispanic heritage.  "But Bethany," I can hear some of you saying--"isn't that culturally insensitive?"  To which I say nay.  It's not like I expect  people of non-Italian heritage to join me in celebrating Columbus Day, wherein I place three small boats on my front lawn and pretend I'm sailing the ocean blue. Haha--I don't do that either.  I'm only half-Italian so that would be weird....

Also--I haven't been dabbling in halucinogenic substances.  Thank you for your concern, but I'm just introducing my next bag the long way.

Before I reveal, I ask you this:  do you remember those days in middle/high school where the worst thing that could happen to you was that you had to give an oral report, and your stomach would be twisty and turny from the night before up until class was over and all was right with the world again?  Take that down a notch, and you'll understand how I felt about this particular bag.  Well, the fabric, actually.  A lady I work with asked me to make a large tote bag for her daughter in law who will be graduating from college soon.  Since she will be an x-ray technician, she wanted something in a skeletal design, and she chose one with a Mexican flair as she also enjoys Mexican cuisine and travel.  Now, this is totally not my cup of tea. I like florals, and bright colors, and things that are fun or sweet or a little bit nutty.  This fabric is so far out of my element that I actually had a wee bit of dread cutting into it because it just didn't look fun.  Here's what I'm talking about: 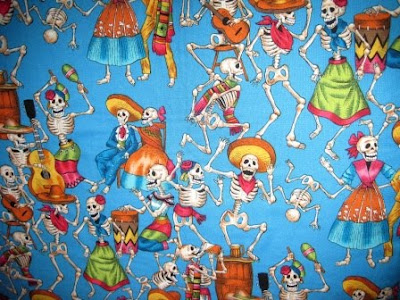 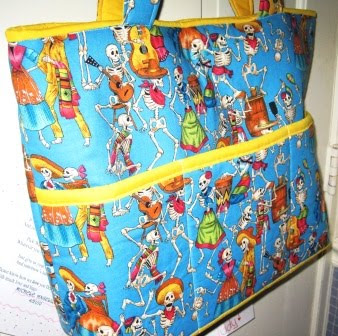 Ay, dios mio! Es adorable!
Instead of just sewing some pieces together like I normally do for a plain tote I added a few pockets with some binding at the top and bottom.  I watched a tutorial on pocket placement for these kinds of bags so I could get it just right, and I put a stabilizer in the bottom to prevent sagging (I wish they had a stabilizer that would work on MY bottom like that. Tee-hee).  I actually had fun putting together this bag and I think it came out pretty cute--MUCH cuter than I ever would have anticipated.  I think the yellow adds some much needed zing to it.  I didn't have enough fabric to do both sides, so I just did the front.  I think this is how I'm going to do my totes from now on (unless someone requests otherwise), but with pockets all around.  It just adds an extra little something.  Here's one more view of it because we both know you just haven't had enough yet: 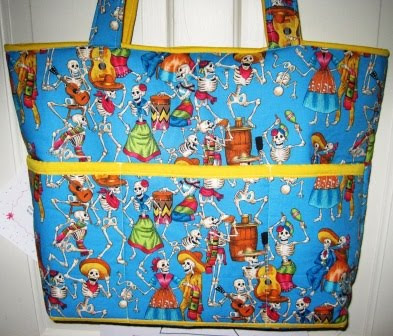 Delantero completo (very loose translation: 'full frontal').  I'm bilingually witty.
I warned her yesterday that she would have it today, and she told me at lunch that she was so excited to get it that she had trouble falling asleep thinking about it.  And she was in LOVE with it.  Office grapevine sent me word that she talked about it for a few hours she was so happy with it.  Now that's mariachi to my ears.

And just in case you're curious, 'Dia de los Muertos' (the Day of the Dead) is a Latin American holiday that occurs on November 2nd and is a day of remembrance for those who have passed on; it's not a day of mourning, but a day of celebration, honoring the memories of those that have gone before us.  Cinco de Mayo is a Mexican-American holiday in celebration of an unlikely Mexican defeat over the French in 1862.  A Spanish lesson, art, and history all rolled into one blog entry.  What more could you ask for?

And I've got an uber-cute diaper bag in the works.  Hopefully pics this weekend.  Unless I commit an untold amount of blunders, which wouldn't be unheard of.  But you're going to spontaneously ovulate when you see it since it's going to make you want a baby just so you can carry this.  I should stop jinxing myself...
From the convoluted brain of Bethany at 10:24 PM