How many old are you?

I had another one of those things called birthdays on Saturday. I am officially a grown-up now.  Yeah, right.  In theory I've been an adult for a long time. In actuality, I will never grow up.  I wish someone would tell my body that, though.  My neck is still kinky (and not in a good way, wink-wink) since I pulled it a few weeks ago.  And my right knee talks to me when I run up the steps (I don't know what it's saying though, since it's speaking in one of those click-click languages from Africa I read about in college).  And instead of letting me get excited about ice cream my hips say whacky things like "one lick for the left hip, one for the right."

BUT it was still a good birthday, as they all are.  One of my sisters gave me a book and CD I've been wanting, and I dove right in.  My other sister gave me a stack of fat quarters and some micro-tip scissors so I can snip off my threads instead of leaving little danglers because I can't get close enough with my thick-tipped ones. My brother gave me a gift certificate to a yummo fabric shop.  And my parents gave me an iPod.  Now, I do realize that iPods have been around since Moby Dick was a minnow (give or take a year) but I rebel against technology.  I didn't NEED a digital camera; I didn't NEED an iPod; and so I always blew them off as gift options. But then I realized--I WANTED those things.  And now that I have them I wonder what was wrong with me? Seriously.  (As a side note: I still have my Discman. And my Walkman. Just in case cassettes make a comeback. I don't think my nephew even knows what they are. Sigh).

If you're wondering where I'm headed with this, I'm headed nowhere.  Just letting you know that according to God's clock I'm another year older on the dark side of thirty, I'm not married and I have no kids (in contrast to plans I made when I was 13 to have all that by the age of 26).  I never would have thought I'd be cool with all that (or without all that).  But I so am.  And realizing that made it a happier birthday.

And because a blog post should have a picture, here's one of a delicious looking patchwork birthday cake.  I wonder how many calories drooling burns? 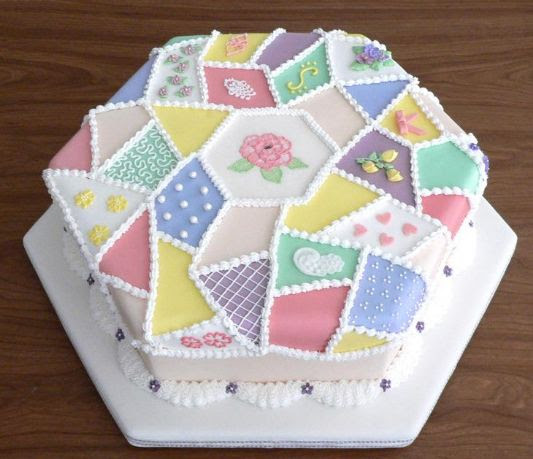 I'm kind of wanting to make an actual quilt that looks like this.
Thanks for putting up with the ramblings of an old lady.  I wonder if you've guessed by now that I'm avoiding doing my prep work for the next bag...
And if the title left you curious, that's how my nephew used to say "How old are you?" when he was three-ish.  I'd take those days back in a second. Not because I'd be younger, but because he wouldn't be smart enough to figure out how old I'll be when he's 15, 20, etc. and then laugh while he tells me.  Little wiseguy...
From the convoluted brain of Bethany at 11:11 PM