The Christmas Story of Grumpy McMiserable

Once upon a time there was a girl (she was really more of a woman, but she had an active inner child so girl is more appropriate as a descriptive term) who loved Christmas. She would have been pleased for the calendar to skip straight from Halloween into Christmas, but then she would have missed out on her mumsy's stuffing at Thanksgiving, so such a holiday pit stop was necessary. She started looking for snow in November, and didn't mind the October Christmas carols (even though she was willing to admit it was a touch early). Christmas was the happiest time of the year for sure, and the happiest people of all must be those that worked in the happiest trade of all--retail.

One day, the girl and her mother took a trip in the wind and cold to the most delightful of places--Michael's Arts and Crafts. It was a Christmas wonderland inside--lights, sparkly ornaments, spicy minty smelling candles, and a 60% off custom framing sale (haha--they have those every week--they should just mark them down permanently). After gathering up armloads of artificial poinsettias to add some holiday cheer to the already over-decorated home, they walked casually by the aisle with all of the artificial Christmas trees. 'GASP!' said the girl. 'Look at those! I want those in my life! All three of them! And they're on sale for $11.99! Down from $19.99!' Quickly the girl and her mother began rooting through the stack of boxes looking for one of each. But alas, they could only find one.

Overcome with excitement, the girl loped over to Tony, Store Associate. She said (in her sweetest voice, mind you) "Excuse me? These trees...only one of them has a box. Can I buy the other two from the display?" Tony, failing to absorb this Christmas cheer, sighed audibly (and rudely!) and said "Fiiiiiine." The girl looked at him expectantly, waiting for the store employee to unhook the wires, but such was not to be. She quietly whispered to herself "Really dude?" And then she and her mother proceeded to unhook the necessary cords. Her mother felt like leaving all of the other cords unplugged just to show him, but they decided this would not be fair to other shoppers who needed some Christmas cheer. And so they made their way to the front of the store.

The girl explained to Cashier Joan "The gentleman in Seasonal said we could buy these two from the display because there weren't any left." Joan said sweetly "Is that him?" The girl nodded, and Joan called out "Tony? You ok'd the sale of the display trees, right?" To which Tony, still with the surliest of surly expressions on his face, audibly sucked his teeth and said "What. Everrrr. That's fine." Cashier Joan said "OK, then." She proceeded to scan the tree that was in a box--it rang up for $9.99. "Woot!" the girl yelled, as her mother said "Well that's a nice surprise!" Store Associate Tony looked over with a twisty, miserable face full of humbug as though he wished he could have made them more expensive. But the girl didn't care. She had her treasures. She gave Tony the sweetest bite-me smile she could muster as she sauntered out of the store into the wind and cold with her mother, and headed to Best Buy.

And that is the story of how these came to live in the girl's dining room: 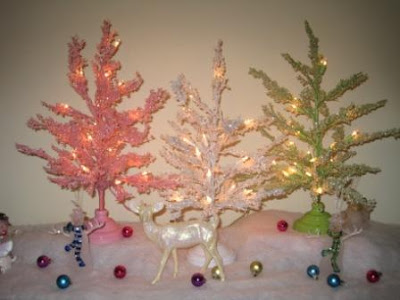 If you made it this far, I sincerely thank you for your perseverance, and I reward you with more photos of delicious eye candy: 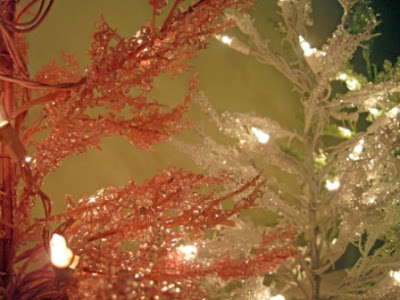 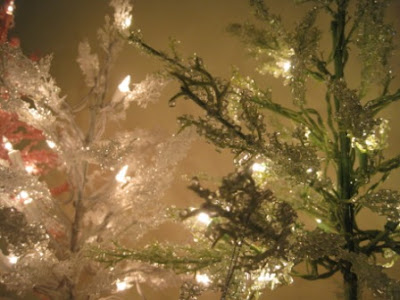 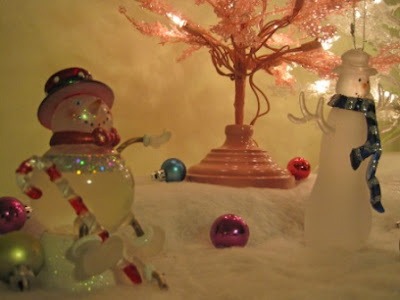 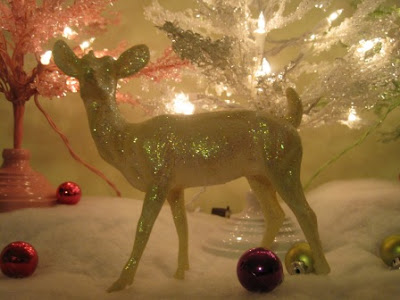 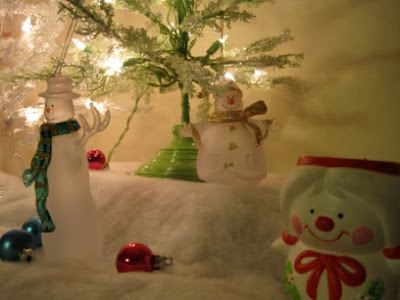 From the convoluted brain of Bethany at 9:46 PM