Remember the other day when I wrote about Pluffy and how I wanted to make Christmas ornaments out  of it? I wish I could forget. I went to the craft store, bought some stamps, some chrome spray paint, and a package of Pluffy. I had such high hopes for this because it sounded so easy. Roll it out, stamp it, bake it, paint it. Something a kid could do (and since this stuff was in the kid section of the store I thought I was good to go).

So I rolled it out (easier said than done--this stuff was a bit tacky for all the weird oil that came off of it), and stamped my design. The stamp got stuck and pulled it into a hot mess, so I sprayed some cooking spray on it to make it easier and tried again. Then I tried to use a glass to cut out a circle around the word. Way off-center, so I rolled it up and tried again. And again. And again. After about an hour I had one that was ok. ONE. So I got the idea to cut out the shape then stamp the word--which made the shape go wonky. No matter what kind of surface I used this stuff just wanted to stick to it so it was all pulled and stretched. I dropped it on the floor so it had floor dust on it. I finally managed to get about ten done. After two hours. Not the easy craft I was hoping for.

I popped it in the oven at the recommended temperature for the recommended time. And I waited. A few minutes before I was supposed to take it out I noticed there was smoke coming from the oven, so I took them out really quick...and saw they had burn marks (probably from the cooking spray). I'm thinking it's fine because I'm going to paint them anyway. So I waited for them to cool. When I looked at them a few minutes later they were covered in these hideous bubbles that were very unbecoming, and the stuff had hardened to the point that poking them with a pin had no effect. Then sister Alicia says "Did you remember that our oven runs hot?" Whoops. Totally forgot about the wonky thermostat. Probably why they bubbled.

With my temper eager to explode, I really wanted to see what they could have looked like so I grabbed the spray paint and hit it with a coat. In the kitchen. Well...spray paint is fume-a-licious, so I had an instant headache. I took them outside to finish spraying them...and they could have looked incredible. But the wonky shapes and the bubbles earned them a trip to the trash can. They almost got the hammer, but it wasn't their fault...I refused to document them with a photograph, though,

I guess they can't all be winners. I hate that lesson. I want to stop learning it.

I asked my mother what she was going to say in the future when I told her about some crazy wonderful project I saw that just couldn't go wrong...she has been instructed to say "Remember the time you tried to make those Christmas ornaments?" to bring me back down to earth. And then, because I'm me, I will buy regular bake-able clay and give it one more go. Because I hate admitting defeat.

So that this post isn't all crafty rage and temper tantrums (sorry about that and thanks for reading this far), here's a picture to get your holiday mindset switched to the on position: 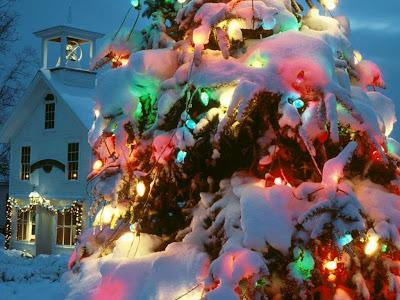 Image from HelloKids.com
I'll be announcing the giveaway winner tomorrow--stay tuned!
From the convoluted brain of Bethany at 12:19 PM