Seriously? Less than a month until Christmas? Come. On. And the past four days blew by in such a blur I now have a headache. But the house is decorated and smelling good, a huge bit of my shopping is done, and I can now chillax a bit. I've been so excited to decorate because I wanted to hang up my latest craft--it's absolutely nothing new, but I have been wanting to make one of these since I saw one last Christmas: 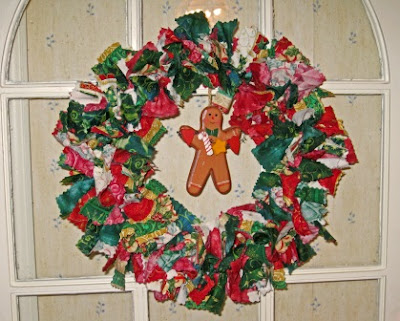 I found a gold wire hoop at the craft store that I really don't know what you'd use it for, but it worked perfectly for this. I took my Christmas scrap bag and my rotary cutter and cut a bunch of strips about an inch a half by eight inches. And then I made a bunch of knots. Then a bunch more. Then I smooshed them all together and made more until there wasn't a lick of space left no matter how hard I smooshed. It looks like it would be heavy but it is surprisingly lightweight. It still needed a little something so I tied a gingerbread man in the center and ta-da! 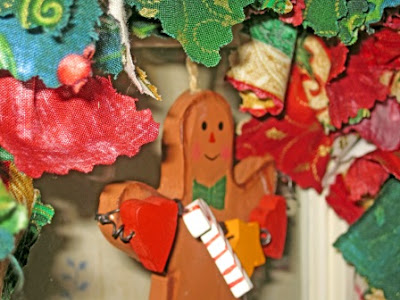 There was something oddly satisfying about tying all of these strips together and ending up with something kind of cute. And I think it goes great on the corner kitchen hutch: 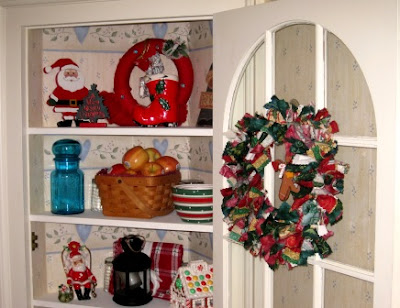 What's that you say? What's that awesome blue jar on the shelf? Sure, I'll zoom in. 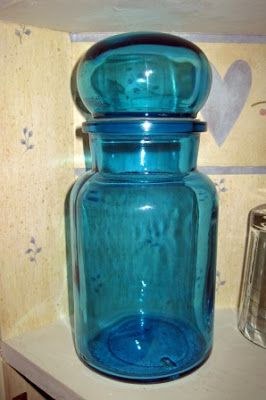 It's from Belgium, that's all I know. And it cost me $2 at a church flea market. The opening isn't large enough for much, but I adore the color. It's the most perfectest shade of blue.

Have a happy week!
From the convoluted brain of Bethany at 8:44 PM