How can something that rhymes with 'fluffy' defeat me?

This won't be another rant, like this one. Just a humble admission that sometimes I am stink-eroo at things that fall outside of my creative comfort zone. Amusingly, I received a few comments that people wanted to see pictures of my Pluffy ornament mishaps. I had already trashed them and had none to share, but now I do.

A coupla things first:  I was the kid who was not the most creative with modeling substances. I was really good at snakes and spheres--REALLY good--but that's it. Also--I would be the worst person at graffiti ever. My spray can technique leaves everything to be desired. I'm actually surprised I didn't end up wearing the paint. Finally, this whole thing is now out of my system and I don't think I will be mentioning again what shall hereafter be known as "The Pluffy Affair."

This time around I bought a rolling pin specifically made for clay. I cut it on a metal surface so it wouldn't stick. Things went along well. Until....the oven. I am convinced my oven hates me. These things looked fine going in and came out looking not so fine. 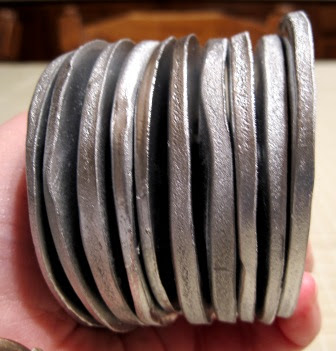 I couldn't even roll it out evenly--wavy bits, differing thicknesses--it's all here.
I created these very scientific drawings to highlight the best parts: 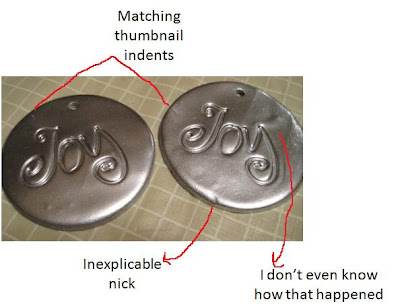 The one on the left is probably usable. We'll see. 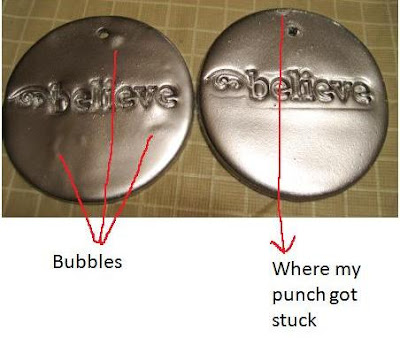 This is one I really wanted to work out--the one on the right will be ok once I tie some ribbon on. 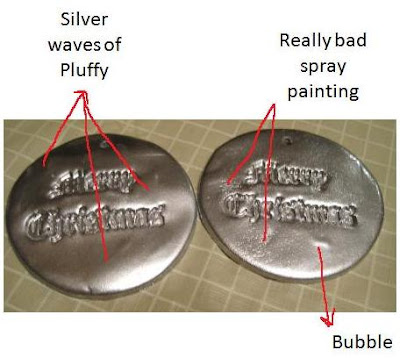 I don't think this one would have been great anyway--the words are too hard to read. 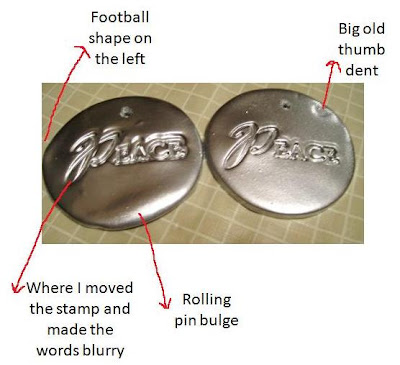 This is another one I really wanted to work out. Alas, it was not to be. 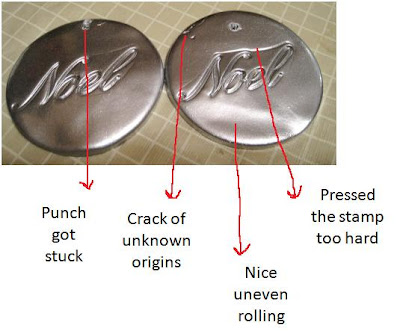 Bah. I couldn't even get this one centered.
The first set had fewer technical problems by far--but there were bubbles EVERYwhere. This set had fewer bubbles but everything you see above. My spray job doesn't even look like chrome. I want to throw them away, my mumsy wants to hang them from the trees outside. If that happens even the birds will be laughing at me.
From the convoluted brain of Bethany at 10:06 PM