Paper. The next best thing after fabric.

About once a week I feel a need to visit a craft store. I don't usually need to buy anything--I just need to go. You know that feeling? Maybe I'm looking for inspiration, or its cousin, motivation... The first few months of the year always have me in a bit of a slump--I want to curl up and do not much, usually because it's chilly. I certainly don't want to sew, and when I'm working on my afghan (yeah...it's slow going) I get a row done and think "That's enough for today." I'm a work animal, I tell ya.

This weekend I actually did need a few things at Joann's. All of the Wal-marts near me no longer have a fabric section, and that is where I used to buy my interfacings. So I had to trek to Joann's and pay a lot more (I had coupons, but still). I sauntered down the clearance aisle, and they had the most amazing deal. A HUUUUUUGE pad of scrapbook paper--360 sheets! For $10!!! And then a coupon!! I decided that instead of running out every time I wanted paper I should just have some on hand. Luckily for me when that little voice in my head started to pipe up with "But you don't scrapbook!" it was easy to shut up with the counter-argument "But it's such a good deal!"

When I got home even my nephew had his wheels turning with what we were going to make out of all of these wonderful options. We had so many choices that we had no idea where to start. We decided to flip through and stop on a page and see what we could come up with. The one we landed on elicited the response "That reminds me of ice cream." And so he made an ice cream cone: 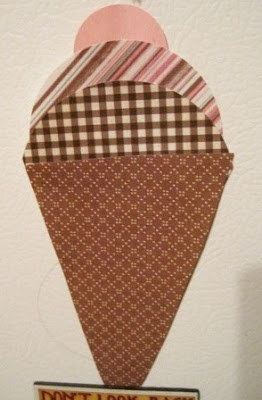 This was enough for him, so he left to watch TV. My mom decided to play for a few minutes while she was making dinner and made a placemat--she said it was the first thing she can remember making in school. She told me that she had gone home and made them in all different colors and then made everyone eat their dinner on them. Now I know where I get it from... I like when she goes fabric shopping with me because she always picks out really neat combos like the one above. At this point, I was still sitting there trying to figure out what to make. All I had was cutting a heart out of the Valentine paper. See? I'm terrible. My imagination must be forced into action. So then, while I was still sitting there thinking, my mother made a bird's eye view of a picnic table: 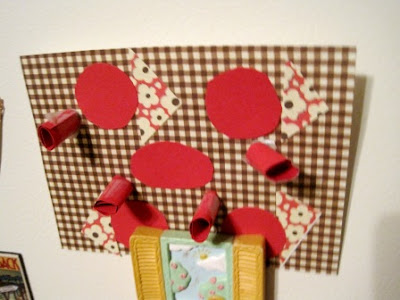 So I glued a bunch of hearts together and made a Valentine so I had SOMEthing to show. I gave it to my sister so I have no pic. After dinner the nephew asks me where all the paper is. He then announces to everyone that "We are going to make things and anyone can join us!" Usually I have to twist his arm to get him to do anything crafty (not literally--don't call child services) but he was really into this whole thing. He paper-stapled some sheets together and said it was a book for us to glue our pictures into. Sister Alicia made a really nifty flower--it was very applique-looking. She took it to work to cheer up her desk a bit (no pic, but I wish I did). Then, I made something. Actually, TWO things. I made a little 3-D sunshine because I felt like using the star stencil I had: 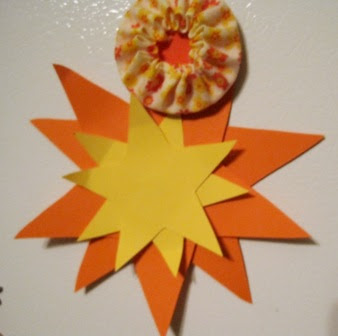 Then, I decided to make a house. My mother had suggested it earlier when I was experiencing my "But what should I maaaake?" angst. I think it came out cute: 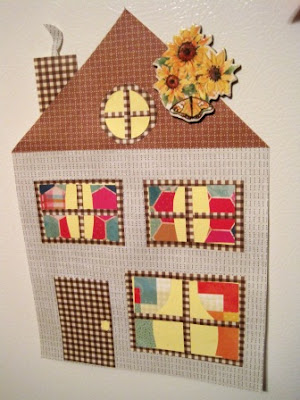 I get a kick out of the little smoke curl by the chimney--it was my one original moment, haha. Oddly enough, if this was 25 years ago and we were sitting around drawing and coloring, this is what I would have drawn. I was a one-trick pony when I was younger--a house, a tree, and a rainbow. That was my standard artwork. Things haven't changed much, haha. But that's okay--I just enjoy the process of creating something, whether it was my idea or not.

Hugs to you, lovelies! And thank you for all the delightful comments you've left on my last few posts. They honestly bring silly grins to my face--true story. And if you fancy some bag-making and fabric goodies don't forget to enter my giveaway (link at the top of my sidebar). One last thing--I know Valentine's Day is over, but I don't do St. Patrick's Day and it's a little soon for Easter, so I'm sticking with the hearts for a bit.