Pretty matryoshkas all in a row

A few weeks ago I saw this project on Christine's blog. I immediately fell in love and used it as my excuse to finally order the fabric. I spent a bit of time selecting my backing fabrics from my scraps--it was tougher than I thought because for as much as I have none of them were exact matches. But close enough was good enough for this. 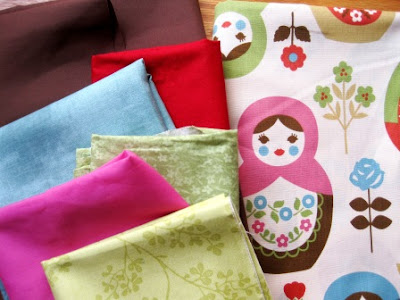 I spent a cheery night cutting, stuffing, and sewing, and had a neat little assortment of five dolls (there are five different dolls on the fabric). Then, in typical Bethany fashion, I thought "Hmmm...now what?" I don't know any little girls to foist these dolls on, but I liked them and didn't want to give them away. I do this a lot--I get excited about something and make it, and then it hits me that I don't really know what I'm going to do with whatever it is. My answer lately has been to string it up and make a garland, and this time was no different. Well...maybe a little different... I raided this: 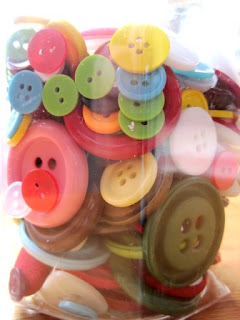 Then I took some embroidery thread and strung them all together, one on top of the other (instead of side by side). 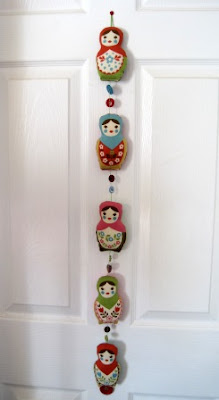 Now it's hanging in my bedroom. I love it. The colors are just right, and it's no secret I love nesting dolls, and I got to use some buttons which I love to collect but rarely use. Here are a few close-ups: 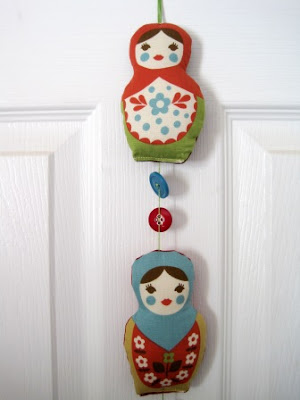 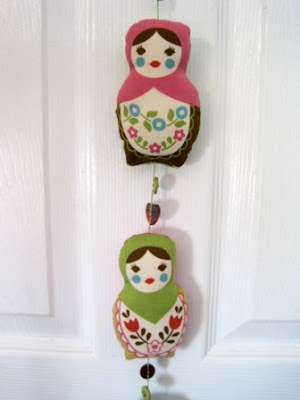 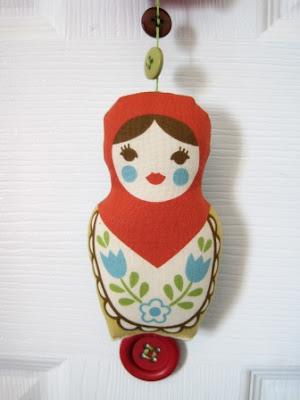 I only used a few buttons because I didn't want it to look too cluttered. I banged in a few thumbtacks at the top and bottom (using a shoe like a good girl--proud of me, Dad?). But because the thread is a bit twisted it has a touch of the twirlies. A touch of blue tape behind the middle three dolls solves that problem: 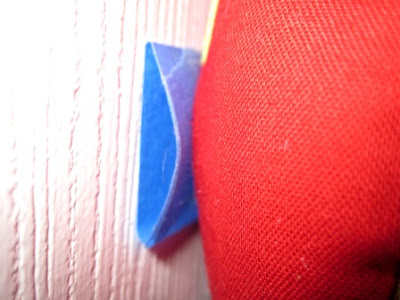 I made these pretty much the same way Christine does on her blog, except after I sewed the outline I just carefully cut the seam allowance way down instead of clipping curves. I also sewed the bottom shut by machine instead of by hand. To sew them together, I used a running stitch up the center of the back of the doll: 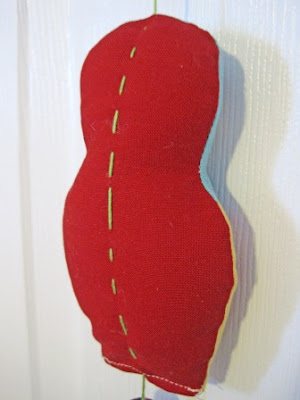 I had bought a yard of this fabric, which means I have a lot of potential dolls left. So I was thinking of appliqueing them onto squares and making a quilt. I'm thinking that might be the best use of the fabric because otherwise it might be a little too much to use in a bag or something else--it would be very busy and repetitive...we'll see. I have a lot of quilting ideas going in my head right now. The other one involves my second favorite--gnomes. Maybe one day these ideas will come out through my fingertips :)

Have a happy Monday!

UPDATE: LOL....my sister says to me at dinner "Are we finished with this obsession yet? I don't feel like reading any more about it." Hahaha! Honesty like that is funny.
From the convoluted brain of Bethany at 3:15 PM