Seeing things in black and white

I heart this bag tons. But it had its frustrations with it, that's for sure. I was asked to make this as a gift for a friend's mother. I had made her this bag last year, and she wanted an exact replica. The problem with that ended up being that I had used two different patterns and made some changes and didn't note a single thing. So I took my time and did some careful cutting and tracing. Things were going along so swimmingly that I knew something would go wrong. I hate to be a pessimist like that, but my sewing experiences lead me in this direction--when I haven't touched my seam ripper once it's gonna be a doozy of a problem.
Here's the problem--you see this zipper on this bag? See how it's kind of a boxy top zipper? 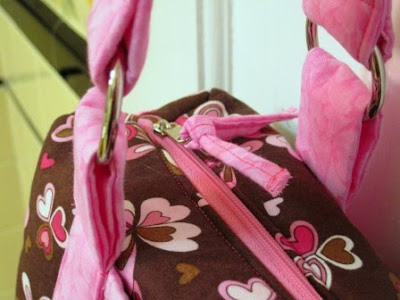 I got so lucky putting this in that the prospect of doing another this way struck fear into my heart (no lie). I tried to find alternate instructions, but no such luck. After procrastinating as much as I could, I finally had at it. And then again. And again. And one more time. I was afraid if I tried it once more the fabric would be in shreds and I'd have bigger problems. So I went with a trusty old suspension bridge type of zipper that has never failed me.

And now? Well, I almost wanted to tell her that my dog ate it so I could keep it for myself: 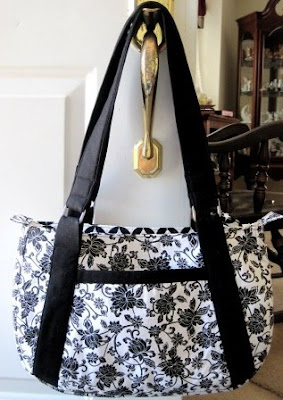 I used u-handbag's Highbrow Hobo pattern for most of it, and a Kwik Sew pattern for the gusset and the zipper directions that failed me. I shaped the gusset a bit more this time and it definitely has a nicer look than a straight gusset (which I think gave the bag a barrel-like look): 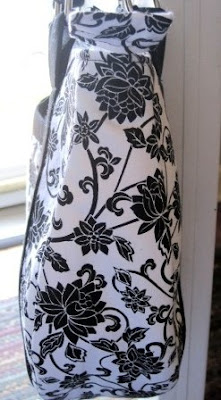 I had the lining fabric in my stash from a failed bag from last year. I reallllly wanted to use it so when she told me she wanted a black and white bag I knew I would get to use it. You can't look directly at it though or your head will feel swimmy, haha. 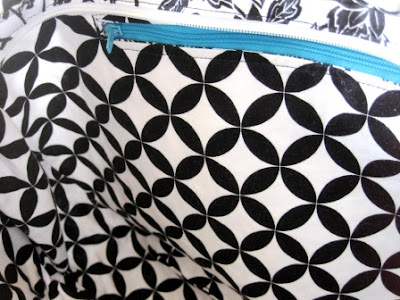 I used a turquoise zipper on the inside pocket, just for a splash of fun. After my initial zipper disaster I had to make some adjustments and the inside pockets ended up being a smidgen higher than I had originally planned, but they'll work fine.

If I had just trusted my zipper instincts from the outset this bag would not have taken much time to sew at all. But because I spent hours trying to get that zipper in it took about twice as long. So, note to self: trust thyself. I know my skills and what I'm comfortable doing, and I think at this point I know enough about making bags that I can tell what will work and what won't work. I just reallly hate being defeated by a stupid zipper. Rivets or something? Fine. But a zipper! Pshaw! (And yes. It is 2011 and I just wrote pshaw).

Have a good Wednesday! It's all uphill from here :)

I'm going to link it here:

From the convoluted brain of Bethany at 11:35 PM