A Quilt for the Newest Nephew

I've been feeling a bit of a quilting itch, lately. I wanted something bright and happy and fun, but also something quick. Pair that with the new nephew and a baby quilt seemed in order. But not a bed quilt sort of quilt. More of a play-mat sort of quilt. I find that when he's here we're hauling around one of the throw-sized quilts I've made to lay him down on so that we can stare at him endlessly. They're entirely too large for such a little guy, so I made him his own. 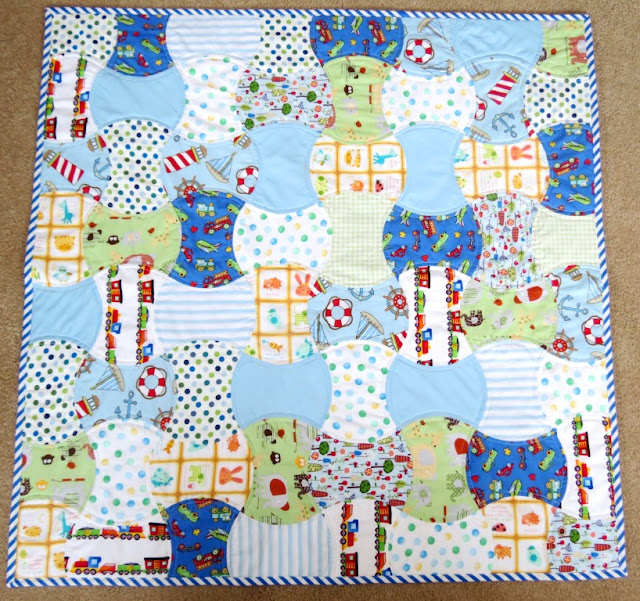 I bought a few prints at Joann's, and had a few in my stash that I ran through my GoBaby! cutter. I've been wanting to use that apple core die since I got it but finally had the time and the project. The curves were easy enough to sew, but they were time-consuming as I had to pin quite a bit. I tried to cheat and ended up having to pick my stitches loose so went back to the pins. 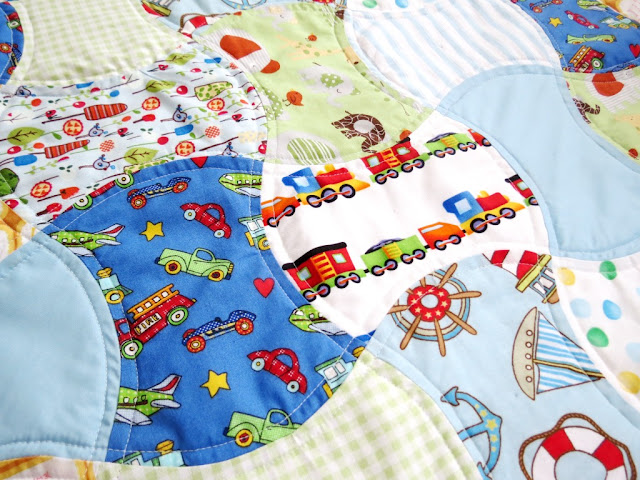 I didn't want to get into any sort of theme other than "little boy" so I went with fun prints that were very little boyish. I did some simple quilting, following the curves of the seams on each side, in both directions. 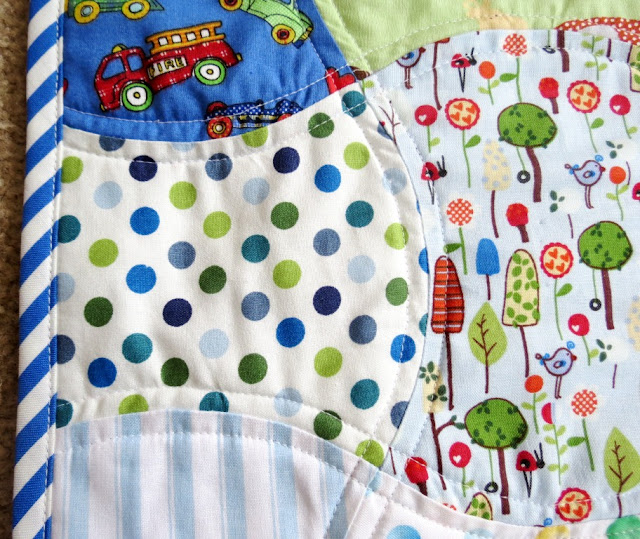 I used some leftover blue and white stripes (from this diaper bag) to make the binding. I really don't think any other fabric would have done the job so well. It's bright, but the striping makes it subtle, and accents the boyish colors in this quilt just right. Usually I moan and groan a bit about the binding process, but this time I enjoyed it. 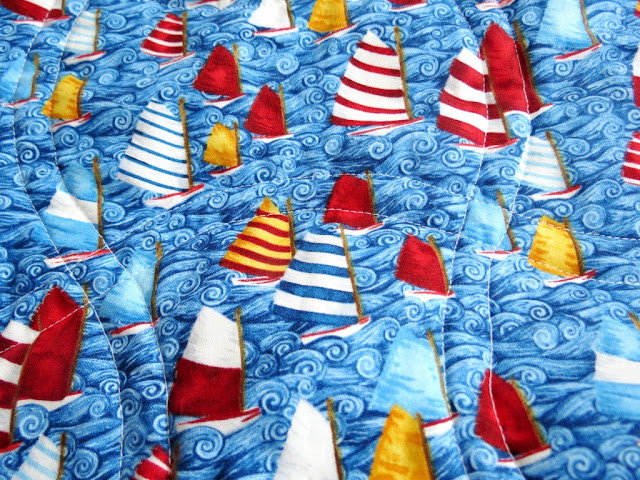 And here's the backing. It has been in my stash for about two years now. I had originally intended to make a beach bag out of it, but never did. You can't see the quilting on such a busy print as well as you could if I had used a solid, but maybe that's a good thing--not all those lines of stitching are exactly superb, so any sort of camouflage is fine with me. 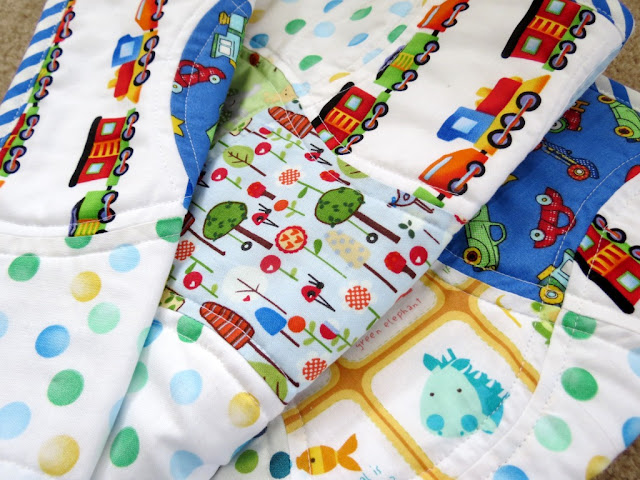 For this one I used cotton batting. I've never used it in anything other than hot pads, and I looooooooooved using it for a quilt! It doesn't pull and shift the way polyester batting does and has a really nice drape. It is, however, a bit pricier. I had bought a craft-sized package (34 by 45") and trimmed some of the length and sewed it to the short side with a zig-zag stitch to make one big square slightly larger than my 36 by 36" quilt top. I had seen on a couple blogs that people save their cotton batting scraps to stitch together, thereby using every last inch they can. It was so easy and you can barely feel the slight lump the seam creates. I do like using the polyester stuff as it comes in different lofts, but it's always good to have options. 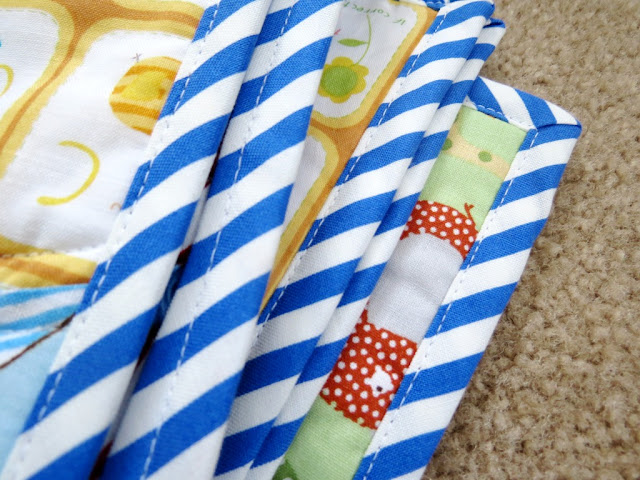 It was quite a bit of fun to work with boy prints. I haven't really had the chance to do that in the past. When Z-man was wee I didn't know how to make ANYthing, and as he's getting older now he really doesn't want me to make him anything (though he did accept mittens, hats, and scarves that were my early knitting efforts when he was about four). 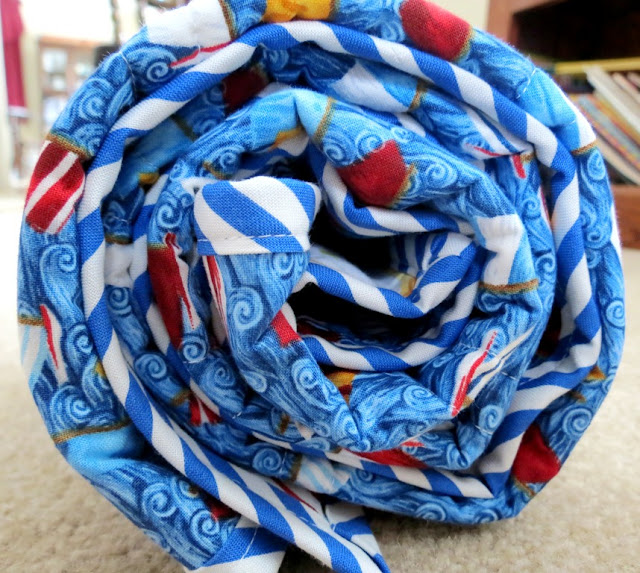 In a surprising way this is one of my favorites. I usually go for candy-colors, but I think changing things up gives me a greater appreciation for the plethora of fabrics available. My sissie didn't bring the A-train over today, but I was bursting to share this so I told her to either stay away from my blog or feign surprise when I gave this to her. 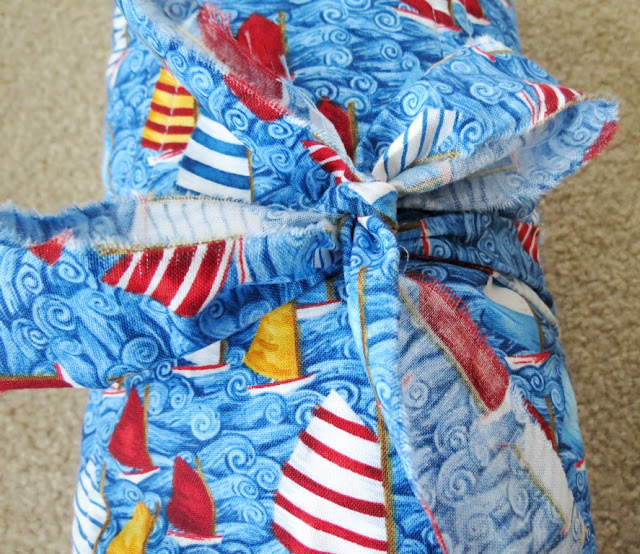 I used a piece of scrap for a bow. Simple and cute. I hope they like it so much it falls apart from use. The quilt, not the bow. That bow better last until I'm eighty.

I do hope he doesn't look too closely at one of the fabrics as he gets older, as it doesn't make sense--


As far as I can see the ladybug is alone. 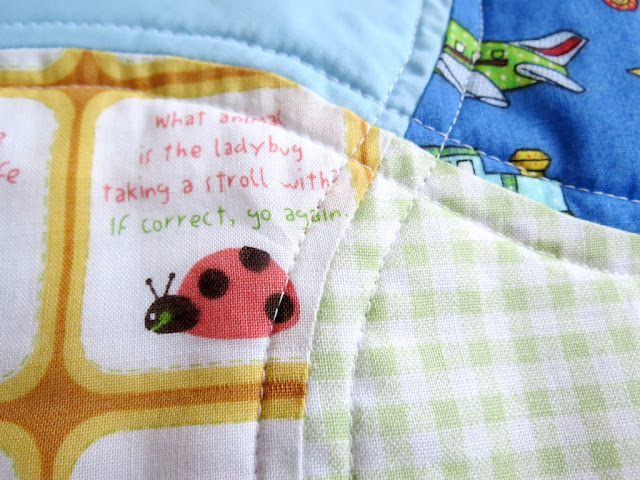 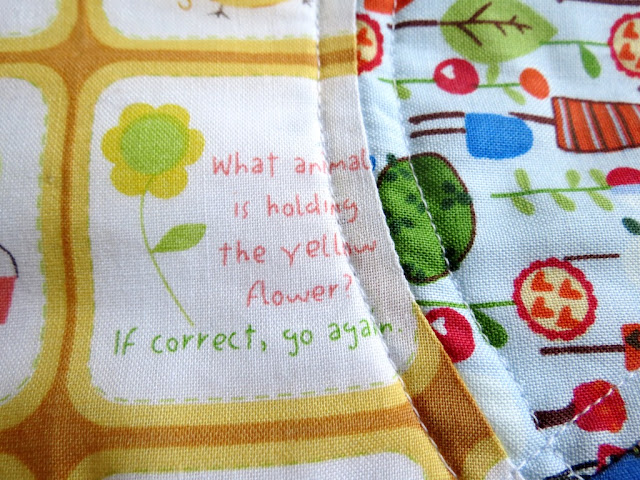 And ain't nothing holding that flower.

Good thing cute wins over logic when it comes to fabric. It's a world unto itself.

OK, I must be off. My stock of knitted dishcloths is getting low :)