Are you allowed to say that if you never had the idea in the first place? For example, say when you could only buy a 2-slice toaster you stood in your kitchen each morning muttering "It'd be nice if they made a 4-slice toaster. I like a LOT of toast in the morning. Harumph," and then one day they had one, you could proclaim "It's about time!" But since I never even conceived of this idea I don't think I can say it. Maybe "It's about time someone thought of that!" or "What a great idea! I wish I had thought of that!" would work. No matter, I suppose. I'm happy SOMEone thought of it. And it's about time.

What the h-e-dub hockey sticks am I blathering on about? ALLEGedly, Joann's is going to carry something called 'Quilter's Quarters' by Denyse Schmidt. It's one yard of fabric, and each fat-quarter area will have a different print. So you buy one yard, and get four coordinating fat quarters out of it. Right now they ALLEGedly have them in four colorways: 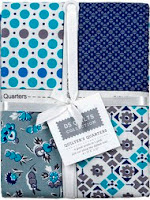 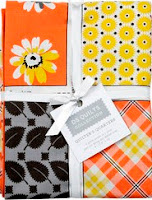 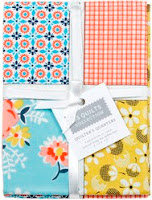 Clockwise from top: Blue Gray, Red Gray, Turquoise, and Red Green
(I have to put it out there: why are they calling it red when one is orange, and one is pink? Irksome...)

I'll be honest--I'm not a huge DS fan. Not that I don't like her stuff, I do. I'm just more prone to like a few prints here and there than to be madly in love with an entire collection.﻿ That being said, if my local Joann's ever gets these in (hence the use of "ALLEGedly") I can see myself buying all of them, especially the blue-gray colorway (does that surprise anyone? It surprise me a little--I'm not usually one for blue-gray as it doesn't smack you in the face with color obnoxiousness, as I seem to prefer...).

These are a great way to get a few prints without committing to big cuts or over-priced bundles. Speaking as somone who is trying very hard to control their beyond-the-basics stash building, these wouldn't much dent your wallet or your shelf space but would be an easy coordinated grab for making a little something fun. I personally would appreciate something like this in Christmas prints. The obvious down-side, of course, is if you only want one of these prints and have to buy the whole shebang to get it (because it doesn't look like there's yardage that goes with these if you wanted a larger cut of one of the prints, or just one of the prints). Otherwise, I like this idea very much.

What do you folks think? Is this something you would buy? Or do you like to do your own picking and matching?
From the convoluted brain of Bethany at 10:30 AM