Guys? First--it's August! Holy hell--where has July gone? Dang, man! I'm not a fan of summer heat, but I'm also not a fan of time flying by. Second--my sewing machine has been uncharacteristically mum lately. I'm also behind in finishing a bag order....but I can honestly say it's because girl genius here neglected to check her zipper stash and had to place an order pronto. 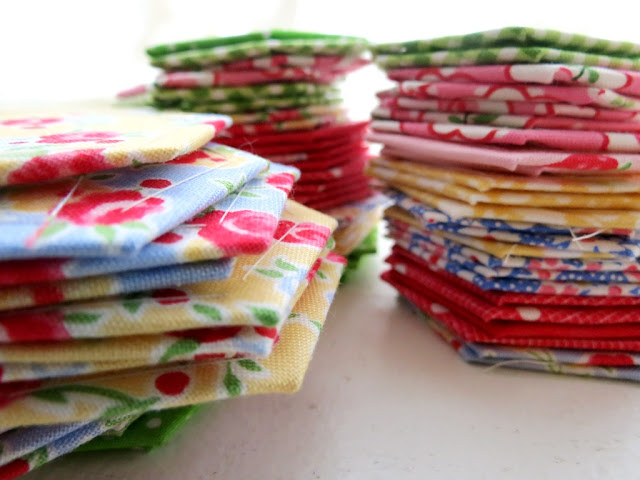 But I also can't deny that the hexies may have something to do with it. I've got ten fabrics, and I made seven hexies in each fabric. Instead of doing a huge scrappy thing with no rhyme or reason I decided to do flowers--six hexies for the ring, and then one for the inside, switching them up a bit for contrast. While I had my rear end plopped on a porch cushion at Grandma's all weekend I sewed and sewed and sewed and now I have ten "flowers" made up.

This is where I need a bit of help, so puh-lease leave me a thought or two in the comments. OK--I 'm not entirely sure what I'm making yet. I don't have it in me to make a large quilt, and I don't want to make a baby quilt because it's too much work for a wee 'un. I have this piece of furniture in my bedroom that I think is technically a sideboard but I use it to hide junk I don't want on display. I've had this lacy thing on it since I bought it just because it was there, but I'm thinking I'd like to put these fabrics on display and make a runner for it out of them. I am going to make 20 flowers and see what size I get out of it. But I'm having a spot of trouble with the layout. I've got three I'm pondering and I'd like your opinion, if'n you don't mind-- 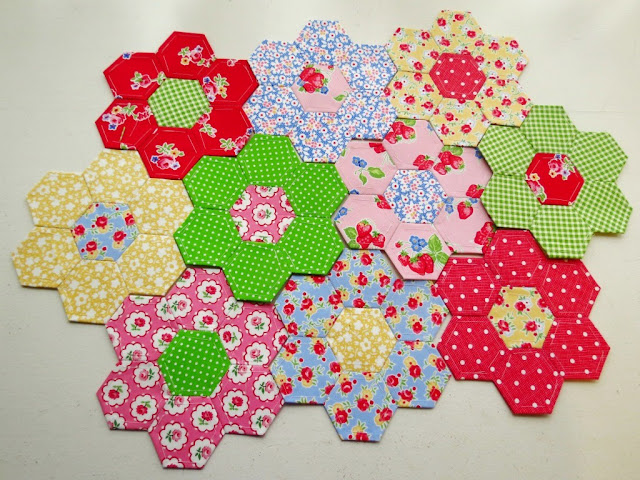 #1 - shoving all the flowers together. I think this may be a bit too busy, but it's definitely scrappy. 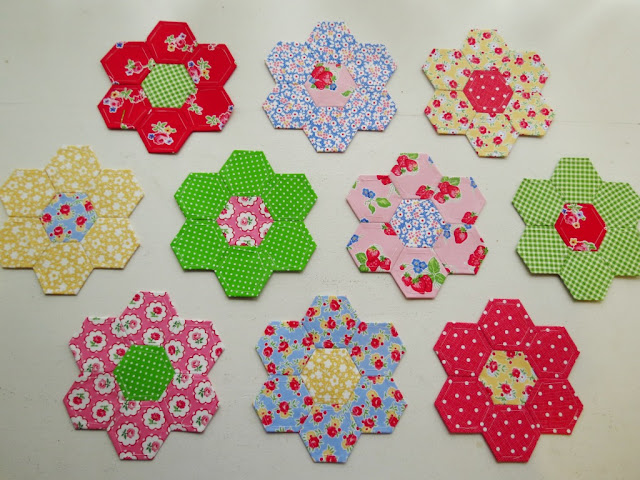 #2 - Here I'm trying to simulate a layout with white hexies separating all of the flowers. I like how the white sets off each flower, but I'm wondering if this is too white. 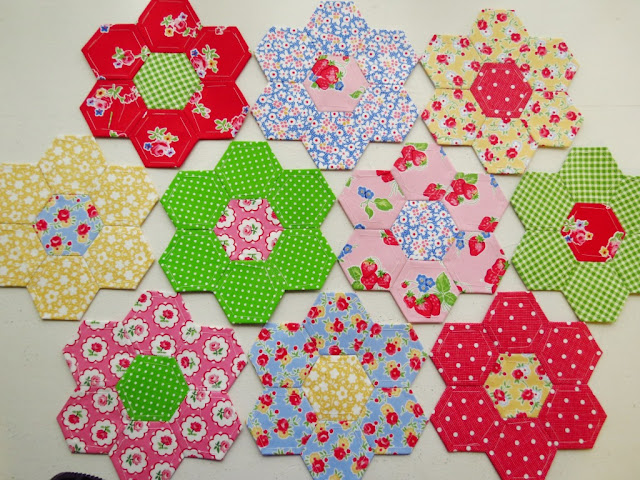 #3--This one happened by mistake. I'd have to cut a bunch of diamonds and triangles (no biggie--I survived cutting the hexies) and drive myself a little crazy with the stitching, but I like this one. The white is there to set off each flower, but it's not too much white.

So what do you think? Which layout do you think would work best? I'd appreciate any thoughts you may have--there's always an angle I don't consider that someone else does, and sometimes it can be a pretty vital bit of info, so don't hold back :)

I'm off to watch these sporting events they've had on TV all week--seems like a pretty big deal in London right now :)  I'm probably going to put a flower or two together, too.

See you soon! Hopefully I'll have my computer back soon. Sounds like it needed to be totally restored. Ughhhhh--but yay for backing up your data!
From the convoluted brain of Bethany at 10:09 PM