Three Dogs and a Baby

As mentioned here, we headed off to a wedding this weekend. Would you believe the only picture I took was of a stained glass window in the church? There is no evidence I wore heels, red lipstick, or a dress. You'll just have to trust that I did. My dad is like a giddy tourist with his camera, and he didn't even take any shots. It must be the travel lag (what you get from a looong car ride) as we had to drive out to Pittsburgh for this one. I have a few cuties of the Chuckster that I thought I'd share. They're all phone pics so the quality isn't wonderful. 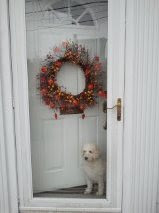 This is his favorite thing to do. Just sit and stare out the front door. Sometimes he gets loud and yippy so you have to tell him he'll lose privileges if he doesn't stop. He usually doesn't, and then you shut the door and he gives you cute sad puppy eyes. But because he's so loud that you almost burn your hand with the iron when he makes you jump you don't open the door again for a while. 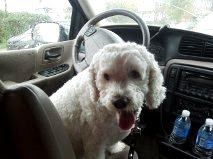 ﻿
For a lunatic traveler who hates the car he sure was eager to get moving. During the journey my uncle would text my dad, who would hand the phone to my sister to type his response as he was driving. There was a small flurry of texts at one points, prompting my uncle to ask "Is Charlie driving?" We responded with this picture. 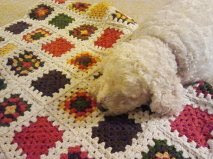 I knew we were going to have some down time, and long car rides really do me in, so Friday night after scoring some eats at "Wings, Suds and Spuds" (yes, it's a real place--and mmmmm-mmmmm good!) I curled up on the bed in the hotel with my granny square afghan-in-progress. I got a few squares added over the weekend, and a few more when we got home. I'm now up to eighty squares, ends all tucked in nice and neat. Twenty more and a border and she'll be done! A certain someone loves to ignore me unless I'm laying a quilt out on the floor, or working on a blanket. Then he loves to plop right on top. I won't name names. He knows who he is.

Someone stayed with his other grandma over the weekend as we were away, so I'm suffering some serious baby withdrawal. Seriously? How could I not? 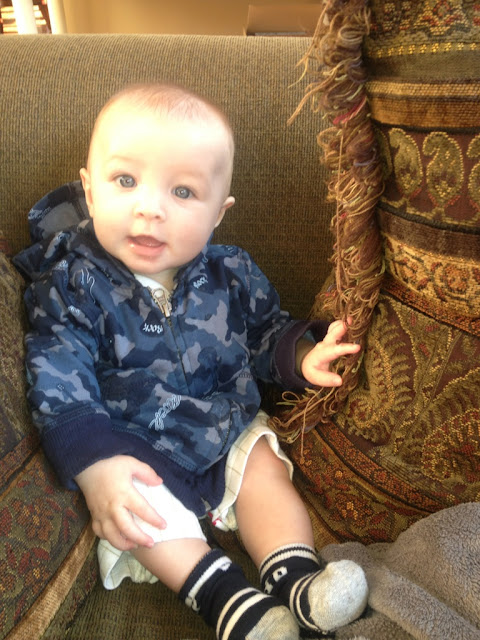