Slouchy Hobos and a Question

You know the wonderfully simple slouchy zipped hobo bag? Or maybe you've seen it called a crescent bag? It is a style I have been trying to sew for three years now (off and on). I have no problem sewing a curved zipper, or sewing in a gusset or darts, or any of that stuff. You know what gets me? The stinkin' strap. I have gotten very lucky I think maybe once in all my attempts. I've had to pick out a LOT of stitches and figure out a way to make the bag work with an alternate zipper style. I've even lost my temper and tossed a few in the trash (gasp!). I've bought patterns and googled until my fingers were numb, hoping for a sprinkling of magic dust on my sewing needle, but to no avail.

For Christmas I received a set of Nancy Zieman's bag templates for the Town and Country collection (which is basically a slouchy hobo bag). You get six style options with one set of templates. They've been sitting on my sewing table since then, waiting for me to get some motivation. This weekend, with nothing else to do, I popped them open and got to work. They're very easy to use and I like them a lot but I had to have a good think over one of the instructions to figure out what the heck (and I'm firmly convinced my Grandma leaned down from heaven and whispered in my ear at some point when I was stuck for about two hours). I'll confess to you, lovelies, that I lost my temper and threw that bag away. This didn't bother me as much as you'd think, as my fabric choice was less than stellar and I was in no way excited about this bag as it was evolving. Very blah. Happy accident, it turned out to be, as the version I made the next day has me madly in love with it :) 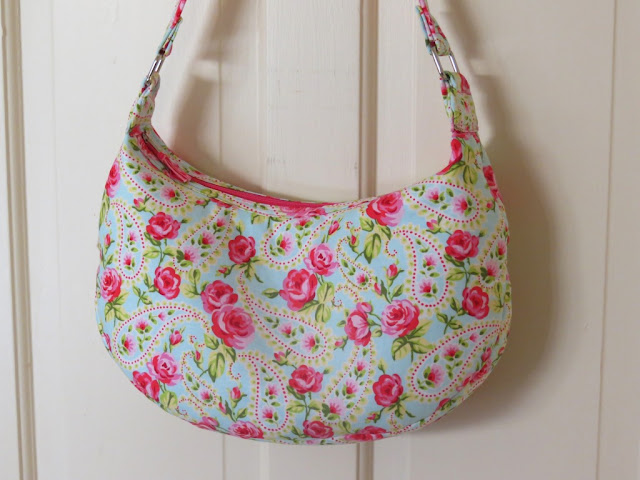 There is something about this fabric that has me giddy for warm weather so I can carry it. My sister said it reminds her of something Kelly Kapowski on 'Saved by the Bell' would have carried, and I'm still wondering if that was an insult (though she says not :) 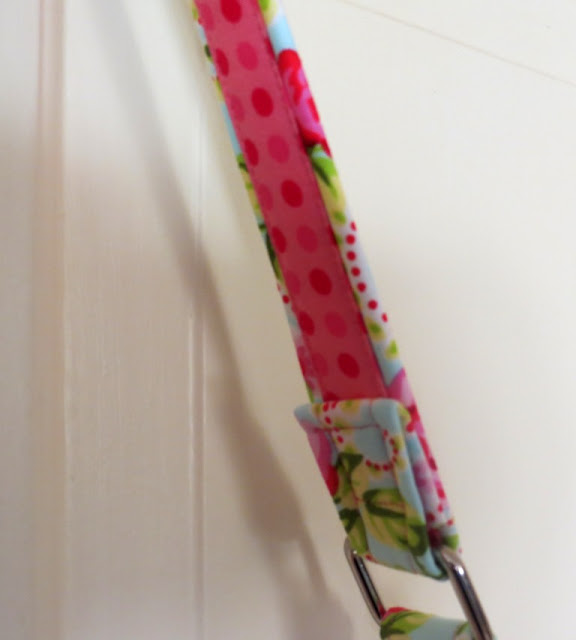 I didn't have quite enough fabric for a full strap, so I had to be a little creative and stitch a decorative strip down one side to hide some raw edges (if you can make it out through that horrendous blur). The pink dots on the strap is what the lining is made of: 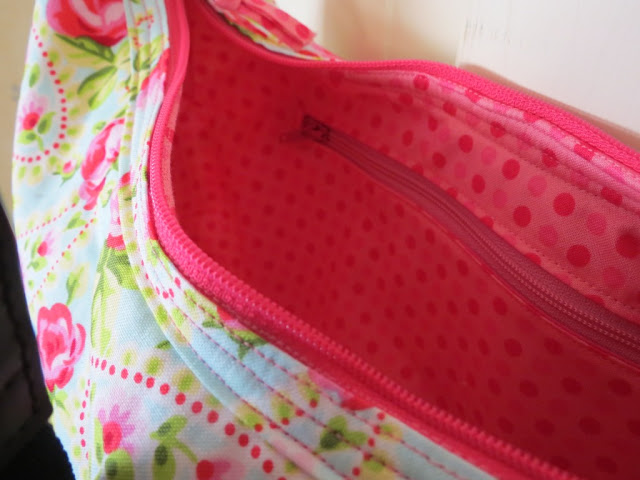 The partial gusset makes this bag quite roomy on the inside-- 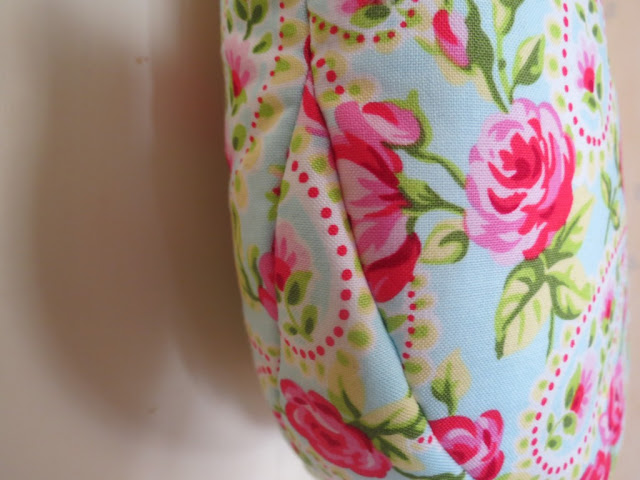 So here's where my situation arises. When it comes time to finish off the strap and zipper, I have one hell of a time getting everything situated just so. Again it got me on this bag, but I was already in love with it so needed to find a way to finish it. Hence the 'caps' I put on over the raw edges to conceal those and hold the rings I was using: 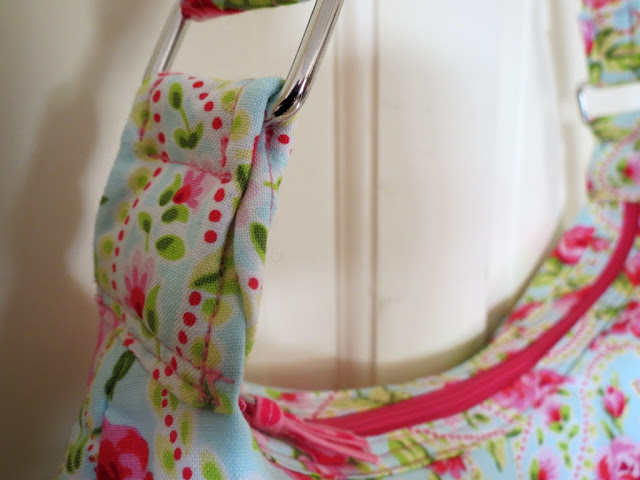 They're not the neatest as I had no more fabric to play with, but if I did the shaping on them would be a lot neater. As such I had to work it out with what I had. I'm in no way displeased with it, and it's for me so that little bit of untidy stitching won't bother me, BUT I'd like to get it down better so I can make a few to sell.

Now, tonight (like just now--like I took these crappy pics about half an hour ago) I had another go with the method outlined in every pattern. I have been sleeping on this for three nights now, and I must be doing some deep thinking as I wake up quite sure I've solved the problem. Each time I try something different that works, but doesn't leave me thrilled. This evening's result was the closest I've come to success, but I'm not elated with it-- 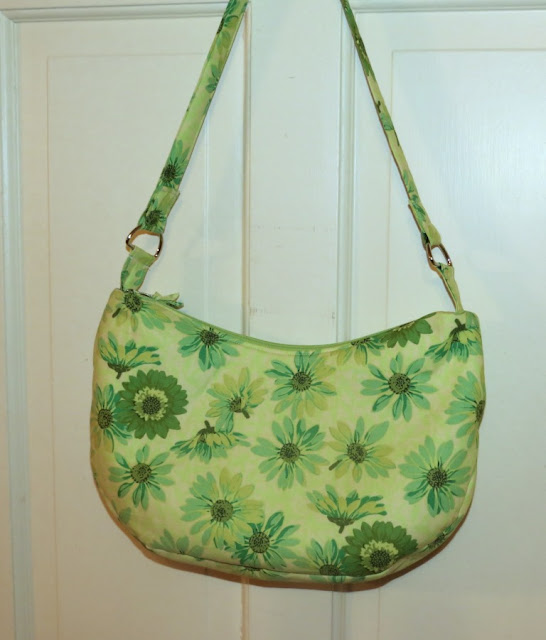 It really is a pretty fabric, it's just bad lighting. What I need you to look at is the shape of the bag. It seems to be a bit shapeless from doing the straps this way, doncha think? Here are the straps the way 'they' say to do it (and the way I just cannot make work satisfactorily)-- 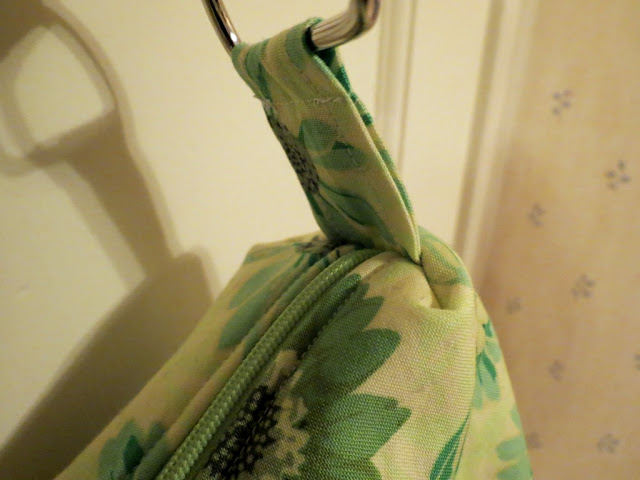 I'm not sure if I'm missing something utterly simple, or if this is just the way these go together. I've been looking quite closely at the product samples in the pictures they give, and the strap is a bit narrower than the seam, so I didn't goof that as I had thought.

I don't know that either method was simpler than the other--I rearranged a few steps during the process, but they're essentially the same (except for the way those straps are attached). So I must ask you your thoughts on this--which method should I direct my efforts towards? Here are side-by-sides so you can compare the shapes-- 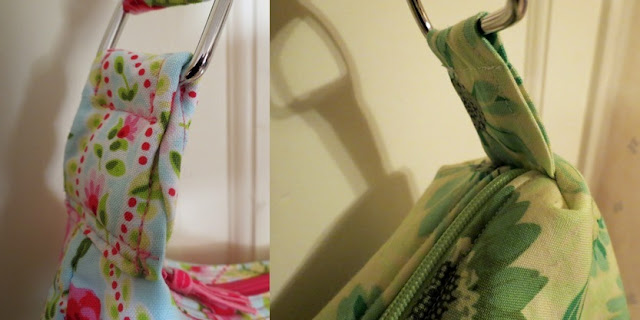 Which one looks neater? Which one gives a better shape? Thanks for your input!! 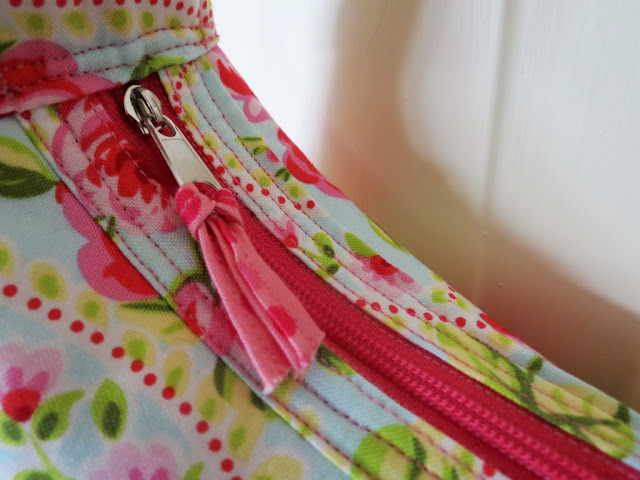 From the convoluted brain of Bethany at 12:08 AM