When a Conversation Starts with "Soooooo....."

Every thing I made over the past week stemmed from conversations that started with the words "Sooooo....I was thinking..." Which is better than starting with "Can you make me this?" Because I've found that when people have been "thinking" they've got almost everything sorted out for what they want--they just need me to drive the sewing machine.

First up? "Sooooooo I was thinking of updating my living room." That would be sister Rachel. Her current couch pillows are were a deep brick red microsuede with brown piping. Very nice, but she wanted a different look. We back and forthed through email with colors and prints and what fabrics would work, and settled on four. So now she's got four citrusy bright good-as-new pillows to brighten up her space. 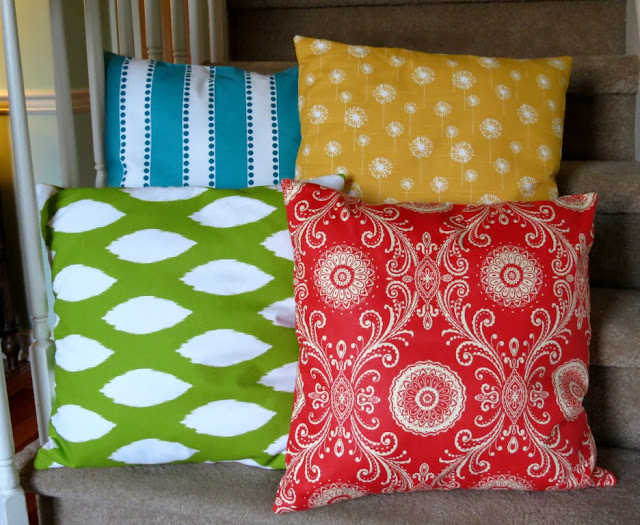 Sister Alicia says they remind her of Penny's pillows on The Big Bang Theory. I am delighted with the turnout. While the fabric is a home-dec weight cotton duck, I still was concerned that the dark pillows would show through. To prevent that, I layered the fabric with cotton batting and it worked a treat. The pillows feel really sturdy and the bright colors get to shine. I used a teeny whipstitch to close the gap, as my blind stitch isn't too sturdy. 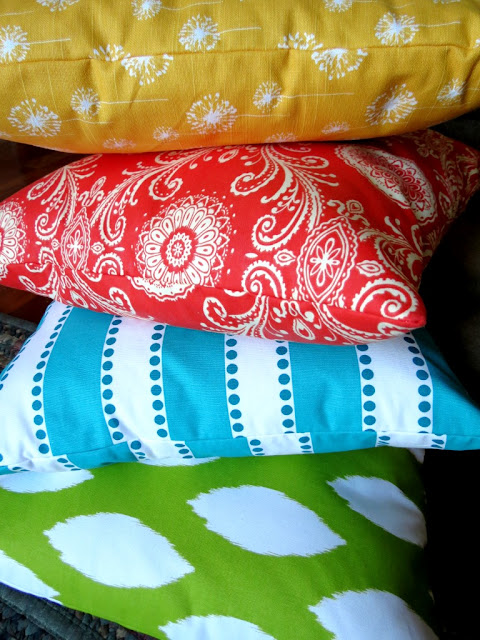 As you can see I obviously didn't think about matching up the patterns but you only see one side of a pillow anyway. These are crazy fun looking, and my favorite thing was that I didn't have to stuff them. My stuffing skills aren't marvelous and I get more fluff up my nose than in the project being stuffed so redoing was much more fun than starting from scratch.

Project 2: "Soooooo Aiden is going to be taking his bath in the big tub soon." And something is needed to hold the tub toys when bathtime is over. She sent me a picture of what she was thinking of as well as some measurements. And I sent her home with this today: 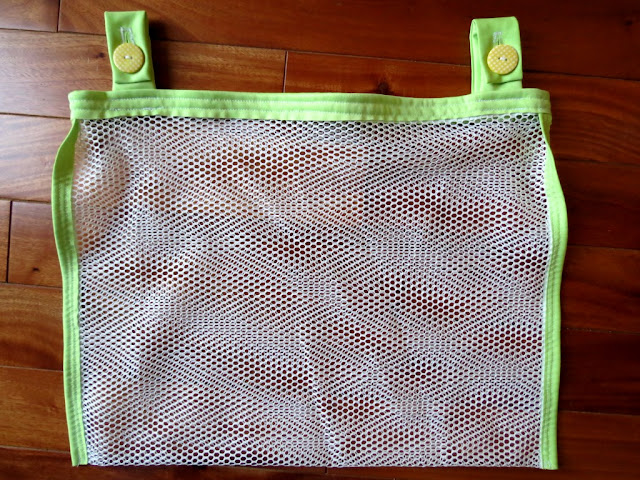 I agonized over sewing that mesh but that was not a problem at all. I used green PUL fabric I found at Joann's and did a bound seam out of that so the mesh is nice and contained on the sides (the bottom is a fold). I applied it around the top edge like bias tape (but it's folded in half just the once as it doesn't fray). I couldn't figure out how to get the side seams to be nice and smooth, but it's hanging in a tub so I certainly won't be stressing. To make the tabs to hang around the bar (as her tiles are rough and not suction-cup friendly) I was thinking velcro or snaps, but the consensus was that velcro might get gross and snaps might rust. So buttons. Or shall I say sew buttons? Hahaha. Lemme tell you--button holes and PUL don't get along. I had to switch to a large needle to make room for the multiple stitches, and I ended up sewing a satin stitched rectangle that I cut a hole in instead of a programmed buttonhole, and thankfully that worked. Neatness wasn't essential, and a buttonhole probably not necessary as this fabric won't fray. BUT I didn't want the hole to stretch too much so I rigged up my own version. And check out the adorable Riley Blake buttons I stashed and have been waiting to use-- 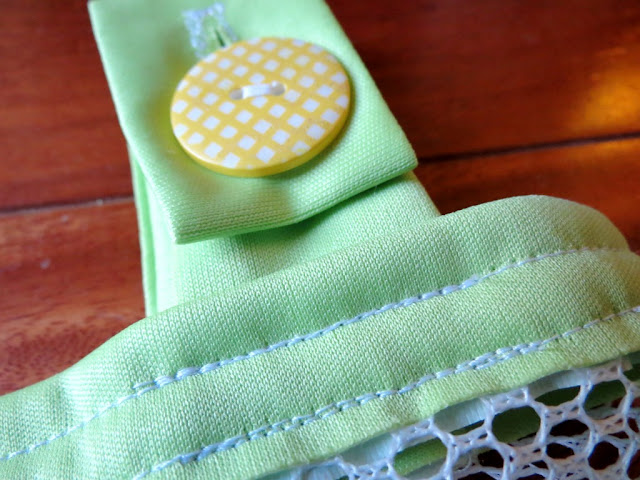 And finally, a girl at work said "Soooo I hear you make handbags...." I am terrible at self-promotion so I do a more word-of-mouth thing at work. I don't want anyone to feel like I'm forcing them to buy something. But even more so I don't want anyone to ask for something crazy that I'll make myself insane figuring out (because I hate saying no). So anyway, I sent her my links to check out my work and she placed an order for a frame purse in navy and white. Plain and simple stripes on the outside-- 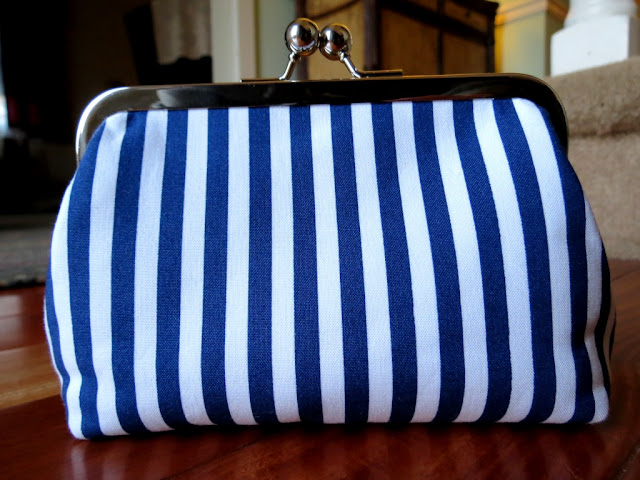 And the sweetest dots on the inside. 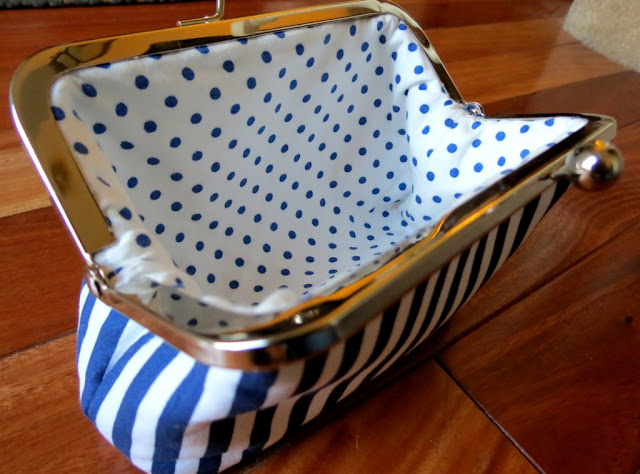 It's so nautical, so summery, so fresh and so classic all at once. I love this one. I haven't made a frame purse in ages, so I was stupid excited when glue didn't ooze anywhere. Like clap my hands and chair dance at my sewing table excited. Everything's all packaged up and ready to deliver, and my sister took her goodies home with her. Now it's me time--a little TV and a little hooking. Just how I like the weekend to wrap up.