I'm on a big use-the-stash kick right now. I feel like I've been using a lot of my fabrics, but the pile isn't getting much smaller.... I've got a pile of frame purses cut out and ready to stitch, so hopefully the stack will be shorter the next time I look. Let's talk about frame purses, shall we? Whether they're called kiss locks, snap frames, pinch frames, whatever--you know what they are. You give a little flick with your thumb and forefinger and it's open and ready to close with a satisfying click. Once you have a workable pattern drawn up they're not very hard to make at all. But, unless you have the fortune to have a pre-made pattern that fits the image in your head, it can be a bit daunting to create your own pattern. It took me three tries that ended in "what did I just make?" head-scratching before I had a shape and size that I thought I could work with.

I've used rectangular frames many many times, and they're pretty simple--straight lines, easy angles, all that jazz. But I've never used a curved frame before and couldn't find a pattern I liked. So I used this tutorial over at U-Handbag to create my own. I have no problem with creating the top part of the pattern as it's quite exact as far as numbers go. When you get beneath the hinges and can do whatever you want? That's where things get hairy for me. In my brain there is no "bridge" between a paper pattern and a vision of what it will look like--I have to actually sew it. My first tries were no good at all, and then, during an episode of The Americans, a few things clicked and I had a workable pattern.

The frame is fairly small (less than 4 inches across at the widest point), and my first version was a little too tall for such a small frame. Using the same pattern, I simply made a longer seam when creating my flat bottom and ended up with a purse that was exactly how I had pictured it for the most part. 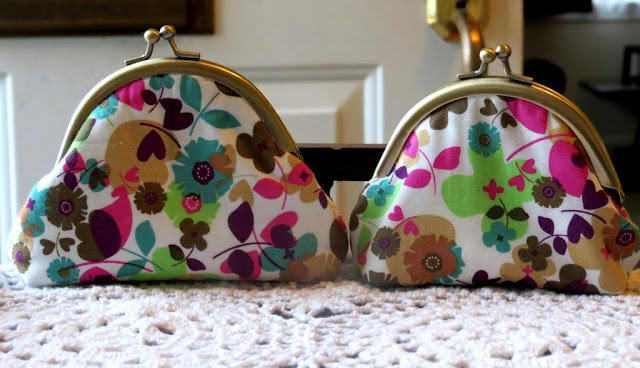 On the left is the original. I'm keeping it for me as I didn't mark the center of the bag and frame and it's a little bit crooked. The one on the right is a bit shorter and fatter by not much, but just enough to alter the shaping a little bit. Now it's just the right depth for a little frame. 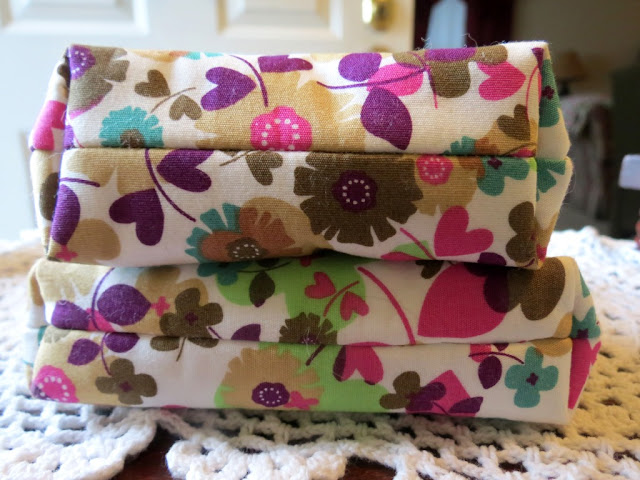 Here you can see how they stack up. See what I did there? Hahaha. But seriously--one pattern piece, two purses that have a very different feel when you're fishing for change. 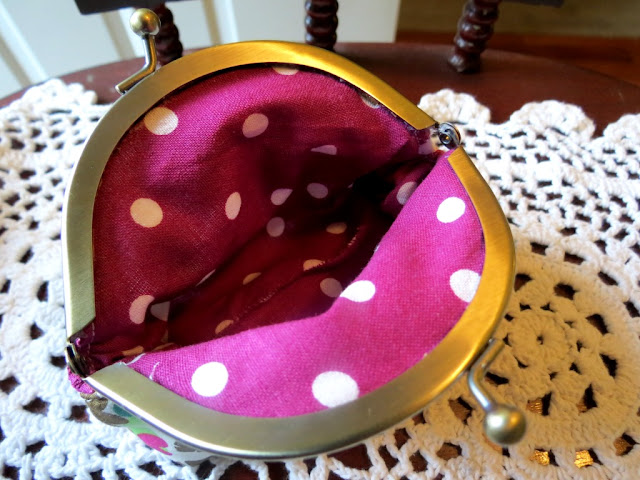 Isn't this the cutest lining fabric?

I actually made a third one of these (in the smaller size) but I had an issue with the seam under the hinge. The first version had the same issue but less noticeably so. The second one makes me cringe. The third I finally figured out the problem--I'll still need to trim a little bit of bulk in future versions, but at least now I know. Stupid v-seams--they get me every time. 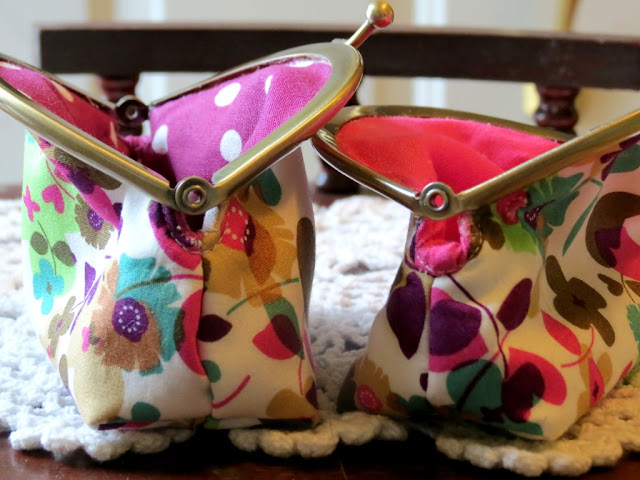 You can see on the right (under the hinge) how the pink lining is folding over towards the outside. It's not doing that on the left (but I do see a thread that needs a snip). 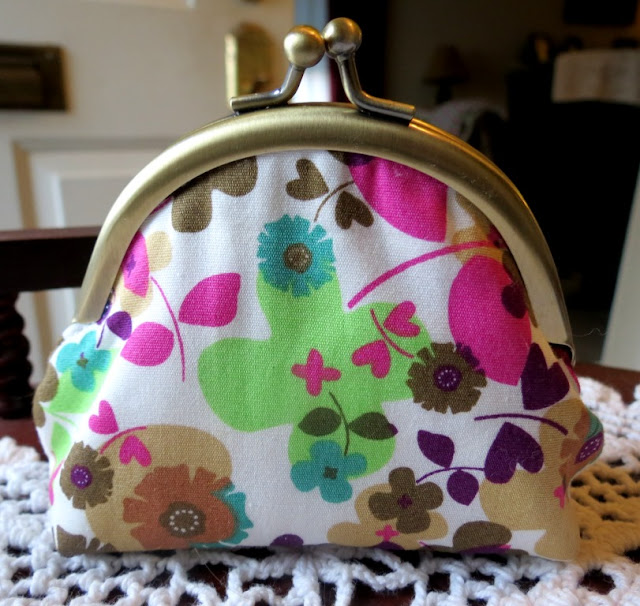 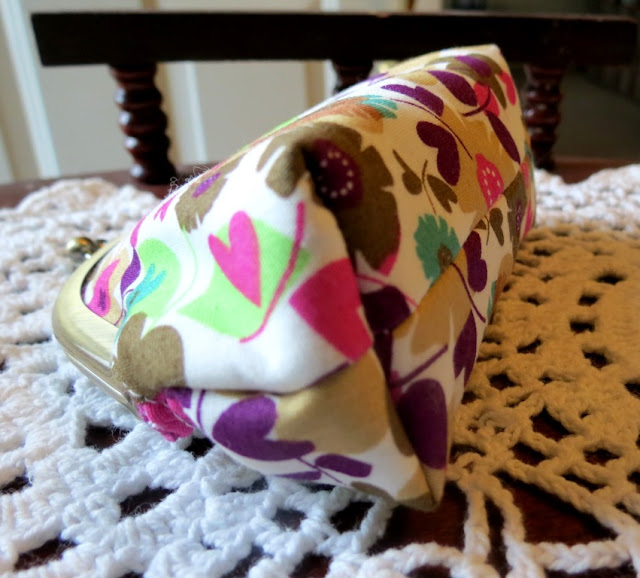 I do like the look of a curved frame, but I find the angular ones MUCH easier to work with. My main issue? Keeping the center points matched up as I adjust everything into the frame. But one must have goals. 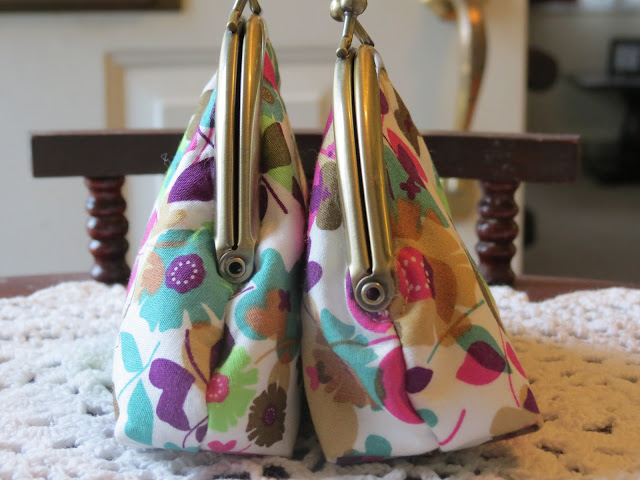 If you've never tried a frame purse before I have a tutorial here for a glue-in version, and one here for a sew-in version. The best part is that these are small and can be made with scraps--even if you goof a few times you're not wasting much. That's what I tell myself every time I wave to the waste bin and say "Bye bye attempt number -- ". But it's very worth it and you'll feel quite pleased with yourself in the end :)
From the convoluted brain of Bethany at 9:20 PM