I think I'm glad this week is almost over. It's been kind of whirlwindish. If you've followed my new Facebook page (like me here) you'll know that my sewing machine woes are far from over. I'm not going to tell the tale until I feel it's been resolved satisfactorily, but I got my 'fixed' sewing machine back on Monday, went to use it Tuesday, and two feet along the hem of a curtain--kerplooey. A few angry phone calls, and it's back with Janome. The service tech was great on the phone, so I hope this all works out OK. Throw in what was supposed to be a simple skirt to sew as a lesson with my sister that was decidedly NOT simple (I detest rot instructions) and the events of today and I'm very happy to be sitting down and chatting with you right now.

So what was today? My not-so-little little guy graduated from fifth grade today. He looks about fourteen, sometimes acts thirty, but he's totally eleven. Back before he started kindergarten he would still take a nap each mid-afternoon. I distinctly hear his little voice saying "I don't need naps anymore. Besides, I'm in kindergarten now." And now it's like he's a real person. I don't know where time goes but I hate that place. (For any newer readers--I don't have children. But I have two nephews that fill my heart with so much joy sometimes I think it might literally burst). Z-man's school is remarkably similar to the one I went to, and immediately transported me back. There's the same smell, the same look, the same feel. It's the sad sort of nostalgia--simpler, easier times when homework was your big problem and your parents took care of the rest. Adulthood is so overrated. 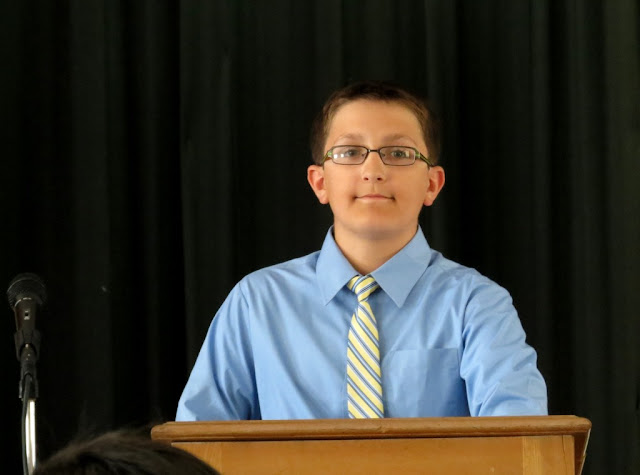 Though he's giving the welcome address here, he looks like he's opening a stockholders meeting or answering questions on a political scandal. So serious. 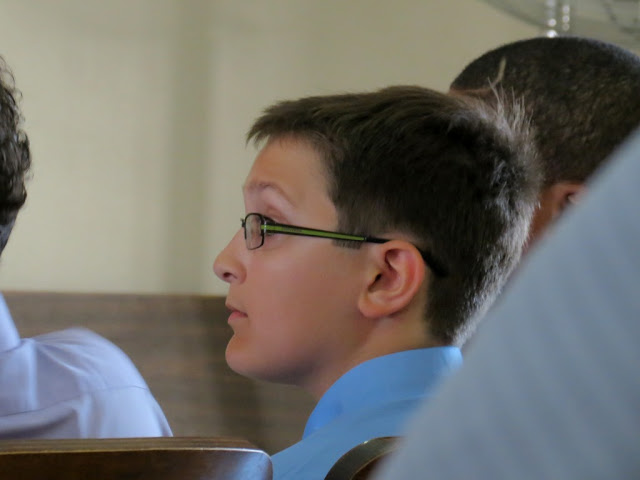 My heart cannot tolerate how big he is, how mature he is. Last Sunday he came over in his baseball uniform, and was laying stretched out on the floor. He's so tall I didn't even realize it was him at first and almost said "Who are you?" It happens that fast. 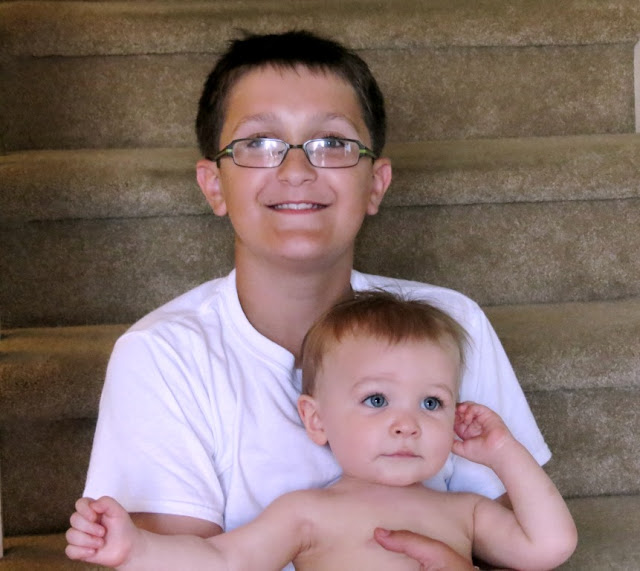 And just as quickly the babycakes turned one today. A year ago we were all waiting to hear some news, and tonight we were all smiling at the little diapered butt walking around and babbling.

It was such a good day, but it made me painfully aware of what a fleeting old bugger time can be, and brought to mind the opening line from a poem by Elizabeth Akers Allen: "Backward, turn backward, O Time, in your flight..." I need chocolate.
From the convoluted brain of Bethany at 10:57 PM