Does that make anyone else think of Chip from Beauty and the Beast? That was the first thing I thought of...maybe the second. First I kept thinking it was called The Talking Teapot, which would be Mrs. Pots. I know--you're like 'What the hell? Shut up or make sense!' Hehehe :) OK, serious face. As part of our (my sisters and I) gift to our mother for Mother's Day we decided to have tea. Not like a cup of Lipton on the porch, but actual high tea. With scones. My sisters found a place not far off called The Talking Teacup, so on Saturday we had our date. My dad was in Gettysburg with my uncles trekking around a steaming hot battlefield for the fun of it, so he was having his own kind of kicks while we enjoyed ours.

Anyway, the place was in an old converted farmhouse, and was so perfectly cozy and charming that I would love to stop there all the time (but that would certainly take away the specialness of infrequent events). When you first walk into the room, you see this huuuuge fireplace--I could quite easily pull up a chair and my crochet bag and spend many lovely hours in front of it. It would have to be lit, of course, because what's the fun of sitting in front of a cold fireplace? 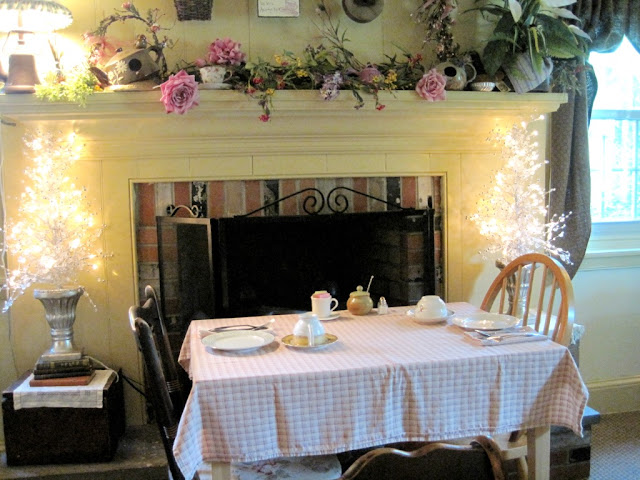 The table settings were all sorts of cozy--homespun cloths and napkins, mismatched plates and cups, various vintage looking creamers and sugar bowls. Someone must have had such a joyful time thrifting for this place. 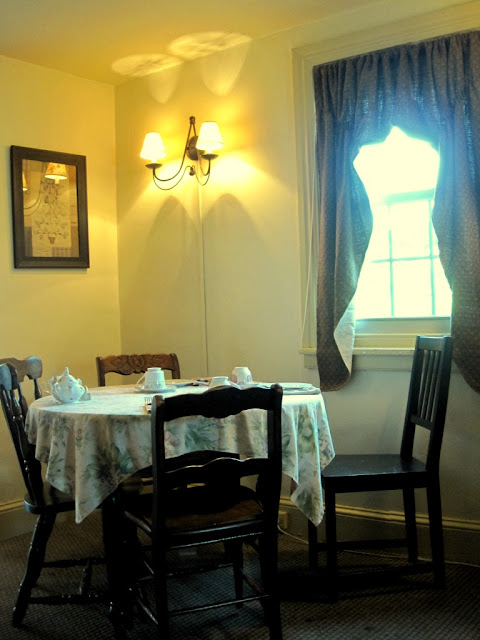 This was one of those places where you could feel the history coming out of the walls. The eclectic decor helped, but if you looked carefully at the window frames and the ceiling beams you could see how much was part of the original structure. I would love to see the wooden floors under the carpets. 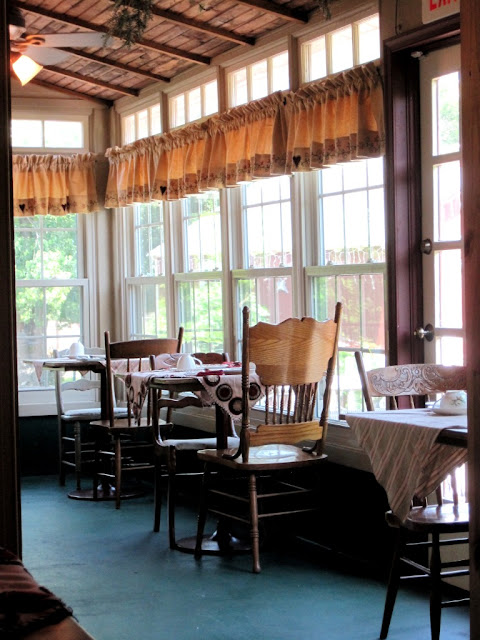 It was verrrrrrrry hot on Saturday, so I'm glad we were in the cooler, more dimly lit room than this sun porch. I get cranky when I get too hot, and nobody wants to deal with that during high tea. There was an entire shelf of tea-related hodge podge--knick-knacks, teapots, little statues, all kinds of fun stuff I wanted to steal. 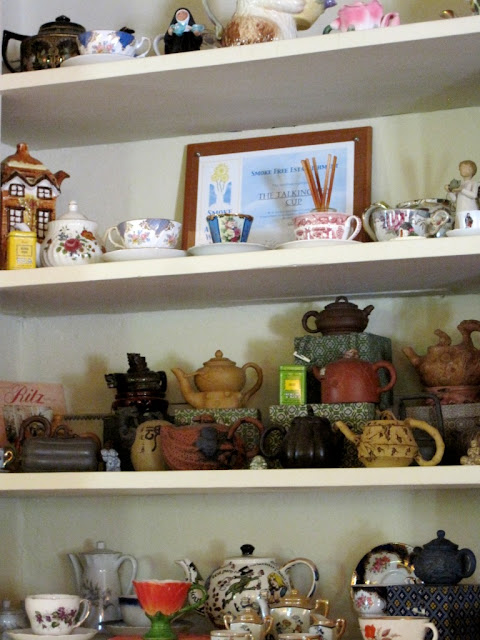 So what did we eat? Plenty. I went in thinking we'd have a nice light lunch. How wrong I was. We were all so stuffed! You had a choice between high tea, luncheon tea, or other lighter fare (sweets, a tea sampling, and so on). We went for high tea. First course up? Scones, devonshire cream, and blackberry currant preserves. 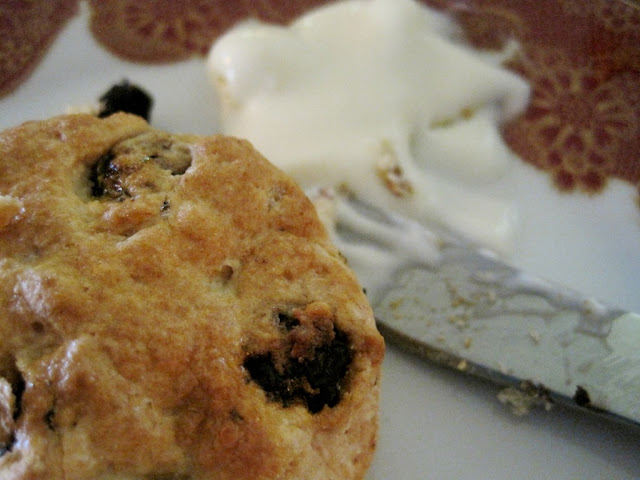 The hot scones were blueberry-lemon, and strawberry-banana flavored. My mom kept insisting they were dessert, I kept insisting they were not. Devonshire cream? Maybe the most heavenly thing you could put in your mouth. It must be loaded with fat or else it wouldn't taste so good. Like mind-numbingly I can't even describe it good. I'm not looking it up because I don't want to know if I technically shouldn't eat until Thursday due to the number of calories it must contain. 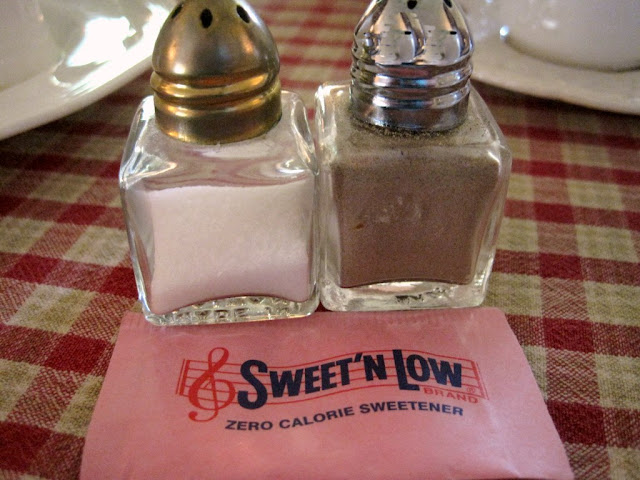 These were so wee I just had to show you how they compare to a sweetener packet.

Second we had salad. I didn't take a picture. It was yummy. It was either that or carrot ginger soup. We all passed on the soup but later that night I was freezing as the AC was cranked, and I really wanted some soup then, carrot ginger or not. And then a gigantic plate of finger sandwiches came our way. 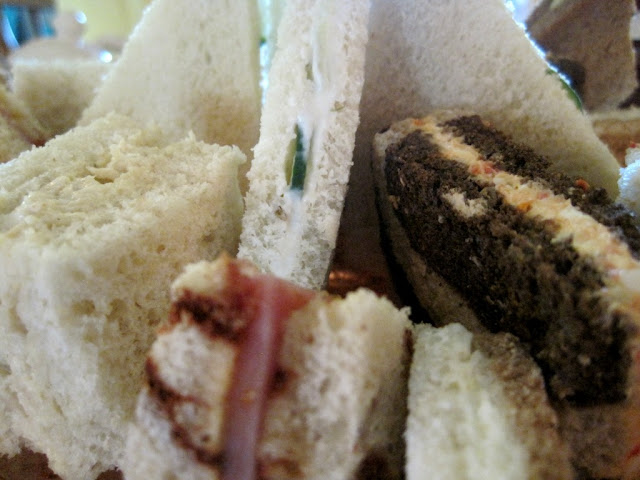 There were eight different varieties and a sandwich for each of us. Each one was so uniquely different that you didn't realize you ate the equivalent of two full sandwiches plus your scones plus your salad. 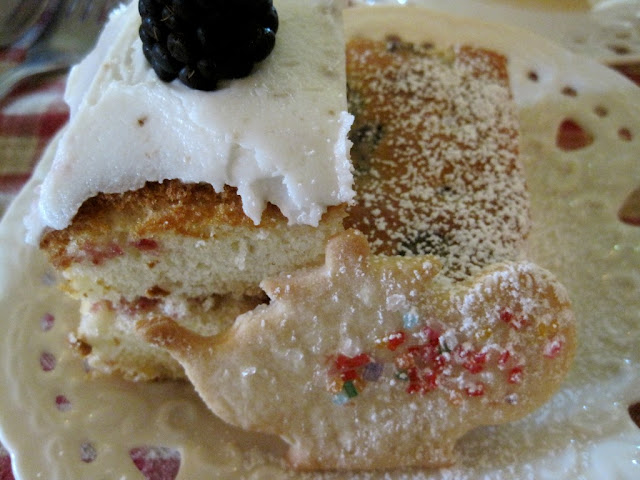 I wasn't insane in the brain over the desserts, which is surprising since that's usually all I'm thinking about. We all agreed we would have liked the scones last, and to have skipped the dessert plate. OH! The tea! I almost forgot about the tea!!

The tea menu was quite extensive, but it was simple enough--there was a variety of white tea blends, green tea blends, oolong, black, and red blends, followed by some herbals. We each went with a different tea, which came out in our own individual teapots (duh, right? It's not like they'd mix them all together).

My mom chose a blend called Snowflake--I remember something about coconut milk being in it. Alicia went with white tea with peach, as it seemed light and summery (and it totally was, evening steaming out of her cup). Rachel went with vanilla chai, with lots of sugar and cream. And I went with chocolate chip mint red tea. We sat there passing around our cups, each sampling the others, but while they were all quite delish none of us wished we had picked something else. It's funny how something as simple as tea can suit a person's personality. 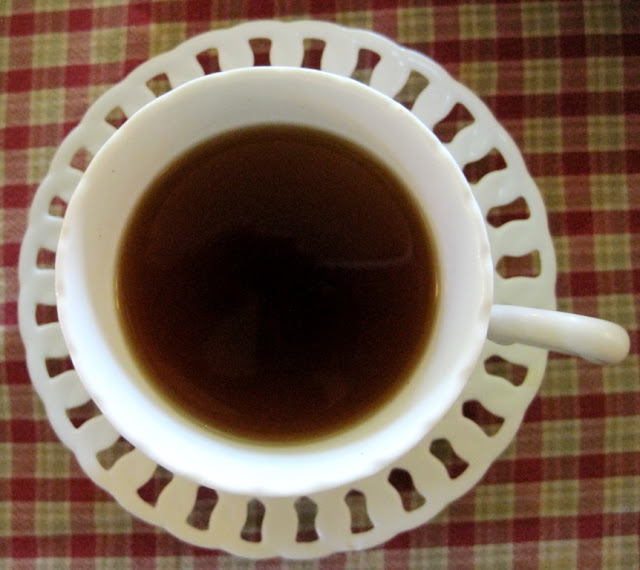 When we first sat down we did this whole thing of "I like my plate. I don't want to trade. Who wants to trade mugs? I like that one better. Do you mind? Can we switch napkins? I sat here because I wanted this plate but I'll trade cups." And so on. Just like kids. I traded for the mug above because I thought it would make an interesting picture. And then I made it blurry. Or the steam did. Not quite sure on that one....

It seemed like we were there all day (but one of those good times that lasts forever, not one of those 'When is this over?!?!?!?' sort of things), but it was actually quite brief. On the way out we passed through the gift shoppy...I mean shoppe....and had a look around. They had some adorable stuff, but I had to talk myself out of it as I really don't need any more whimsical mugs and I'm not willing to break any to make room in the cabinet. 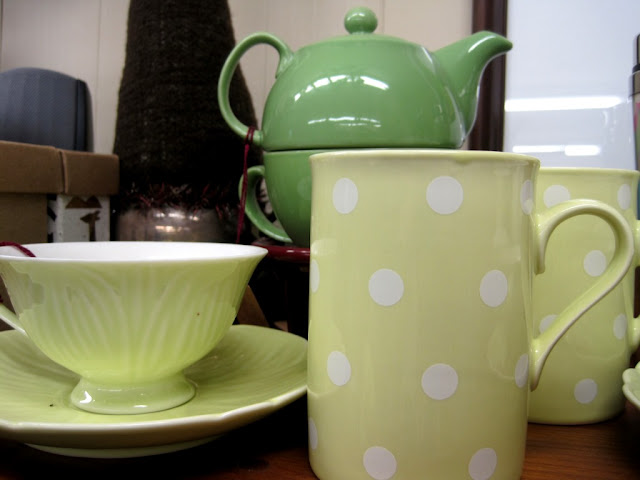 And of course you could buy any of the teas they had on the menu. We bought a bag of the white tea with peach blend--we have high hopes of making deliciously refreshing iced tea and sipping it on the porch. 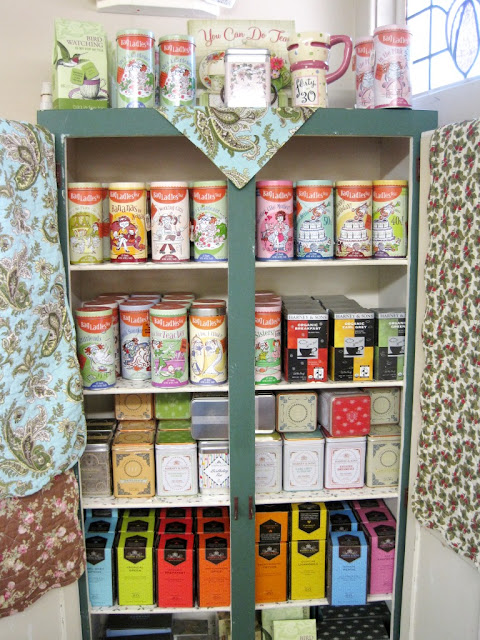 So that was Saturday. It was just what I needed (even though it was technically for my mother) after my frazzled nerves from last week. We all agreed that we simply must do it again, and I'm already looking forward to it.
From the convoluted brain of Bethany at 11:30 AM