Orange Rhymes With Sporange (and yes, that's a real word)

Did you know that the opossum is ridiculously resistant to rabies? It has something to do with their naturally low heart rate or low blood pressure that enables them to play dead--it's not an environment in which rabies will thrive. I googled that while at the veterinary emergency center with Charlie and my mom (he's OK--it's just an ear infection; they see emergency, surgical, and regular cases on weekends when your regular doc is unavailable) in response to a text from my sister: "On the phone with animal control. Come straight inside--we think the possum in the yard has rabies." So google provided some interesting info that animal control confirmed when they told my sister they weren't coming out and that it's probably just dying. I have no idea what became of it, as I've had a raging headache all day and have only just now remembered it. So that's your unsolicited fun fact for the day.

Anyway, I didn't get a ton done this week. I worked on my sister's birthday present that I wrapped before I remembered to take pictures. And I made a cute little drawstring bag for a wee cousin. After seeing these a few weeks ago, her grandpop told me that she would love one. I tried to find out her favorite Disney character, but she doesn't have one (she's taking her first trip there in August and he thought it would be cute). I was also asked not to put her name on the exterior (child safety from strangers and all that jazz). So what did I have to go on? Her favorite color. She may be the only young girlie-girl I've ever met whose favorite color isn't pink or purple. It's orange. And I love that.

I couldn't find much in orange that I liked--everything just wasn't right, or the orange was a little too obnoxious. At Joann's I found a nice soft orange--kind of reminiscent of a creamsicle, so I went with that. 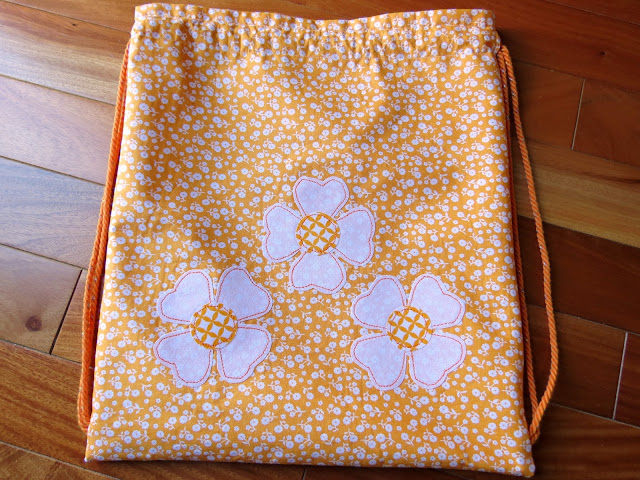 I was going through some old quilting magazines that I couldn't figure out why I had saved them, when I came across the cute flower shape above. It seemed perfect so I made a few. Do you know how hard it is to randomly place things like that? I figured this was the best way to keep the flowers visible when the bag is cinched. I usually don't interface these bags, but I used a lightweight fusible for this one. You can definitely feel the difference it makes. 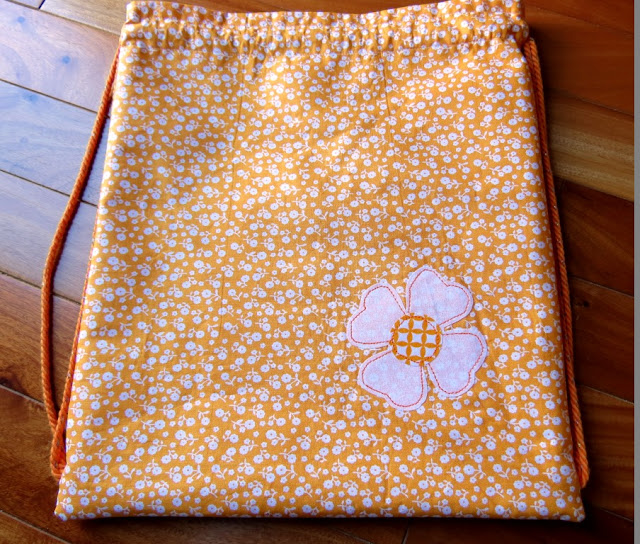 I made four flowers so I stuck one on the back so it wouldn't be so plain. I had a major dumb moment with this. Usually you fuse your bonding stuff to the fabric, trace the design, fuse it to your base piece (in this case the bag) and then stitch if you wish. I was almost done the first twisty-turny flower when it hit me that something wasn't right. I had forgotten to remove the backing paper and fuse it down. Throw in the triple stitching I was using and it took a nice long while to pick the stitches out and start over. 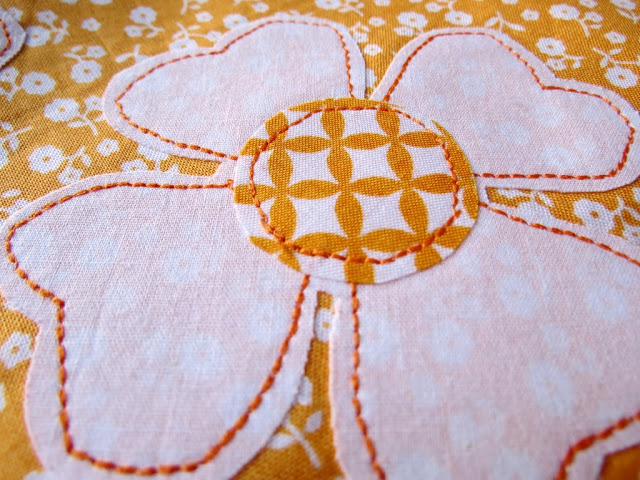 Using the triple stitch function on my machine really makes it stand out as opposed to a standard stitch. The curves were tricky, but going slooooowwwwwly sure does help. 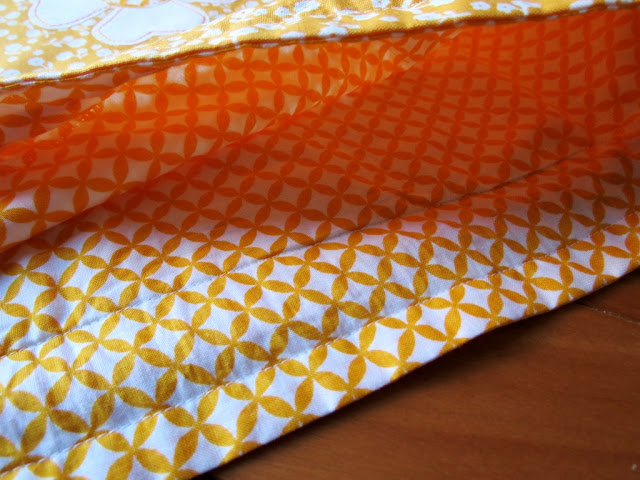 The lining was a perfect orange match even though it came from a different fabric line. This could have been cute on the outside, too, with orange flowers. I had bought a gazillion yards of white twill tape that I was going to layer up and sew together for sturdiness before feeding it through the channel, but there was a flaw in the worst possible spot that I hadn't noticed. I couldn't use it, even if I cut it, so that will be used for future projects. I tried to find white drawstring, but of course every color was available but that one. I bought a few options, and this sparkly orange is the only one that would work both in color and in fitting through the casing (which, note to self, perhaps I should make larger in the future). 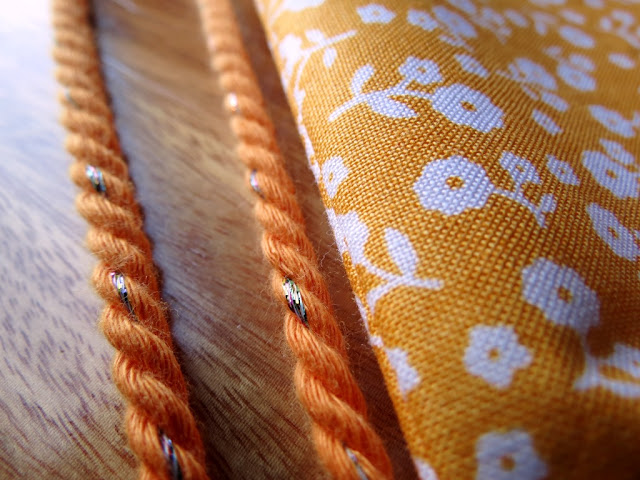 So that's my meager offering for the week. Next on my agenda is a wallet. For a guy. I've never made one before so it will take some tinkering. I said to my dad "I need you to empty your wallet completely so I can borrow it." He simply said "Okay." He's at the point where he doesn't even question odd things anymore.
From the convoluted brain of Bethany at 10:12 PM