A Jaunt Up North: Part Two

Sunday morning dawned clear and sunny. There had been plans to hit up a water park, but it was a lot farther away than we had realized,  and we would have lost at least two hours just driving. So we headed over to Bushkill Falls billed as the Niagara of Pennsylvania. I guess if you take that to mean the biggest waterfalls in PA, then yes, you could call it that. Otherwise, if you're thinking the falls would be just as big and grand as Niagara you would be disappointed. 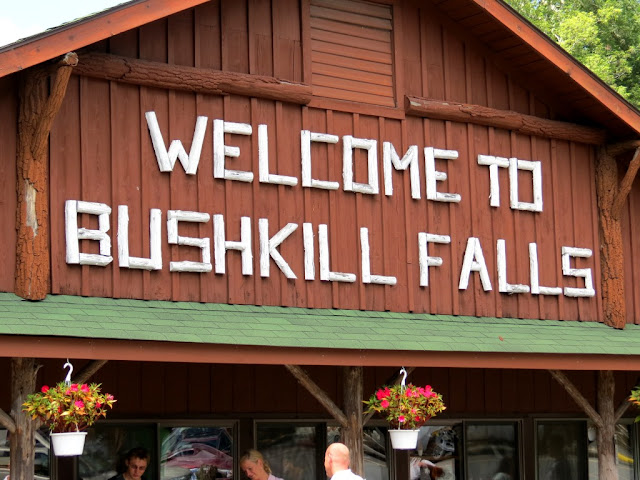 We had come here years ago during a drought--the park was almost empty and the falls were mere trickles. We have had record rainfall this summer, so the falls were roaring this time. And the paths were crowded. The day was fairly warm and I was tempted to throw on jeans but I'm glad I didn't. There was a fair bit of exercise involved. There are four different marked trails, varying in difficulty and length that you could walk. We went for the second trail (about forty-five minutes) as did everyone else in existence, it seems. 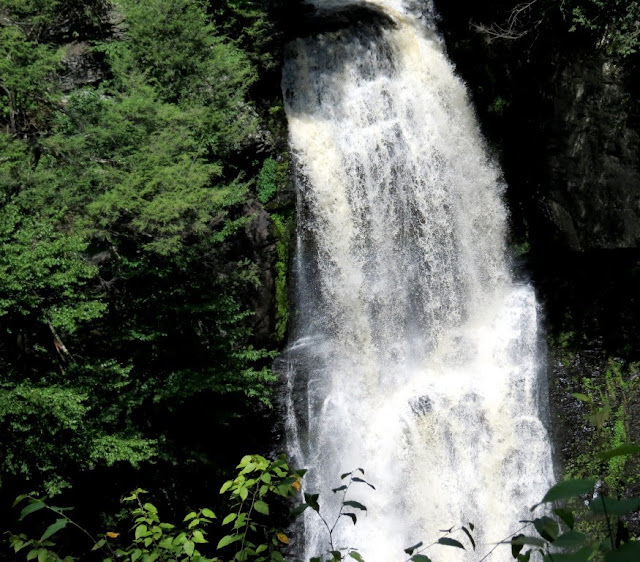 You do get a map that shows where you are and which particular waterfall you're looking at, but the further you go, and the more you climb the hotter you get. And when I get hot I don't really care where the hell I am--I just want to not be hot anymore. Zach, in his infinite eloquence, declared that the falls "look like bird crap on a car window." After a second look I couldn't really argue, LOL. 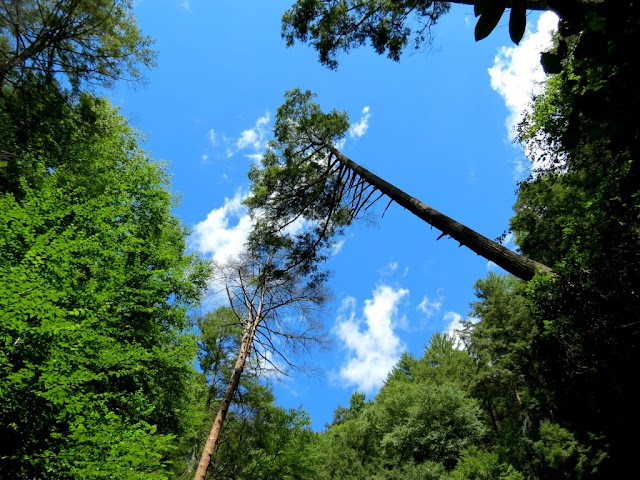 Isn't that sky so stinkin' blue it's criminal? Down under the trees amongst the falls it was dim, unless you were in a spot where the sun was hitting. But when you looked straight up it reminded you that was indeed bright and sunny. 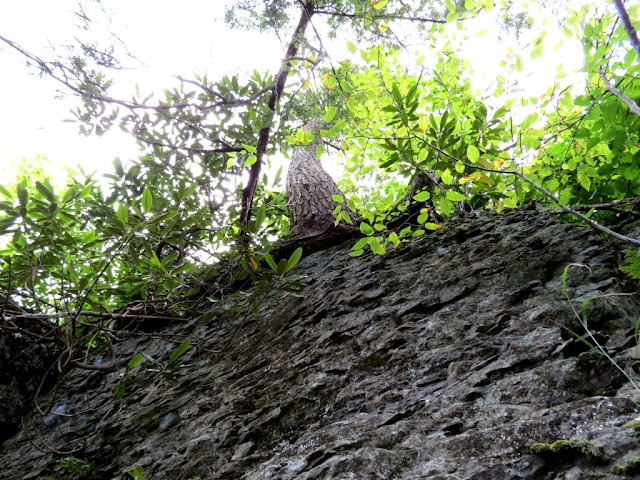 All of the paths are dirt paths, but to climb through the park you have to go up and down various sets of steps of differing heights and widths (and levelness, in certain instances). I don't think I would have wanted to be the one who had to build all of those (although in my mind they were built by industrious little gnomes :) 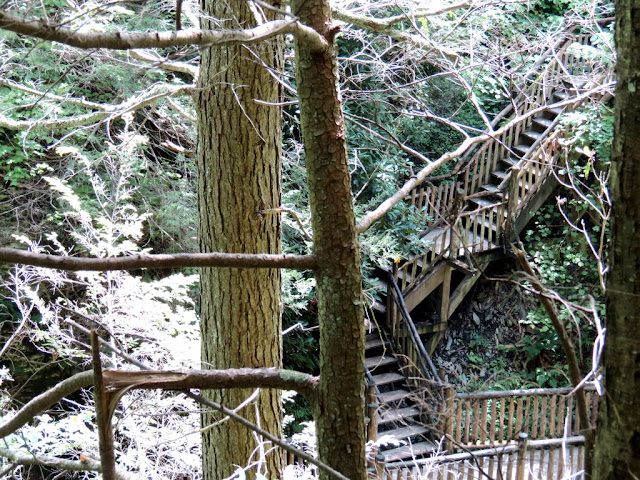 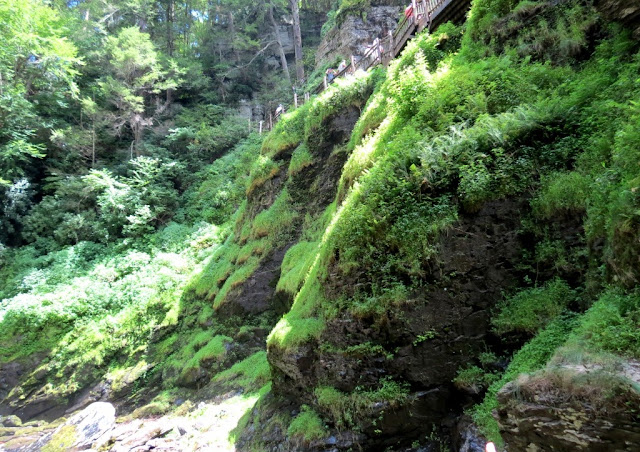 Other areas look like they could be part of the little wading pond where Mary and Laura splashed and played in On the Banks of Plum Creek. 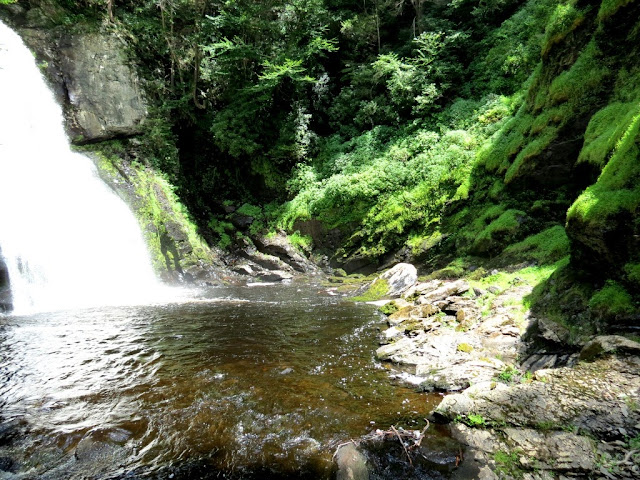 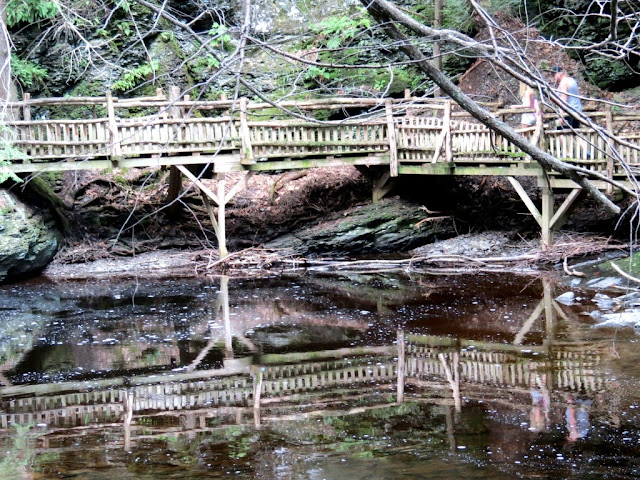 I do not remember there being this many steps the last time we were there (which was about sixteen years ago), so I can't be entirely sure if it's age that made me forget the steps or age that made me feel them much more than before. 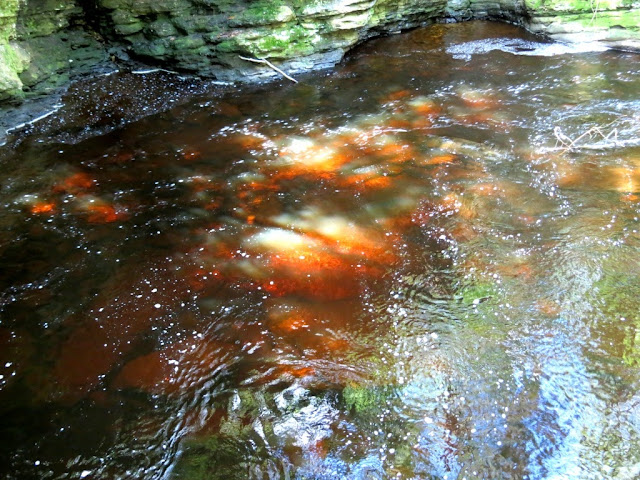 Wishing on pennies is obviously quite a popular activity here--look at the light reflecting off all of them! It almost looks like fire in the water. Zach threw his penny high and hard, hoping for a ricochet effect. Instead, his penny got stuck on a wee crag in the wall. He was not perturbed that his wish might not come true, because "eventually the water will erode the wall all the way over here and my penny will then fall in the water." If only he had that much patience when it came to everything else in the world. 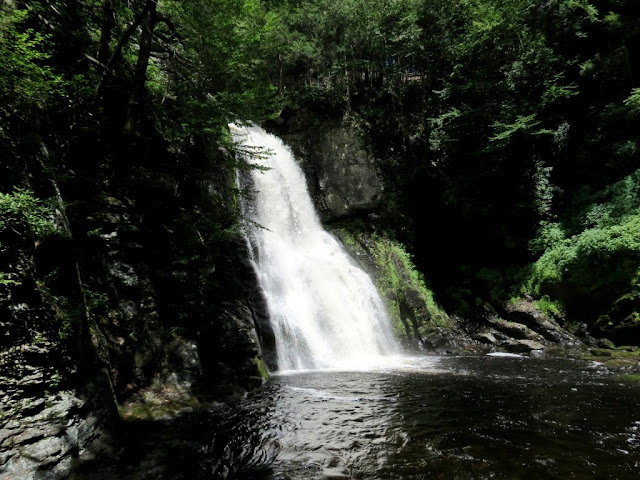 I couldn't find any interesting creatures (which is fine as they tend to freak me out more than intrigue me--I'm such a city girl), but time has some interesting effects on the more stationary bits of nature: 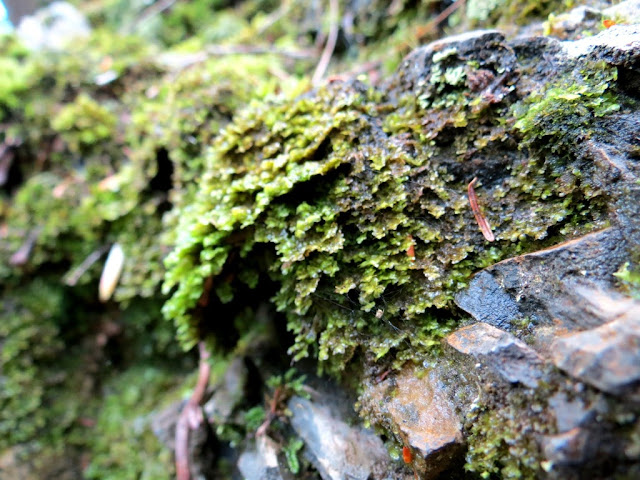 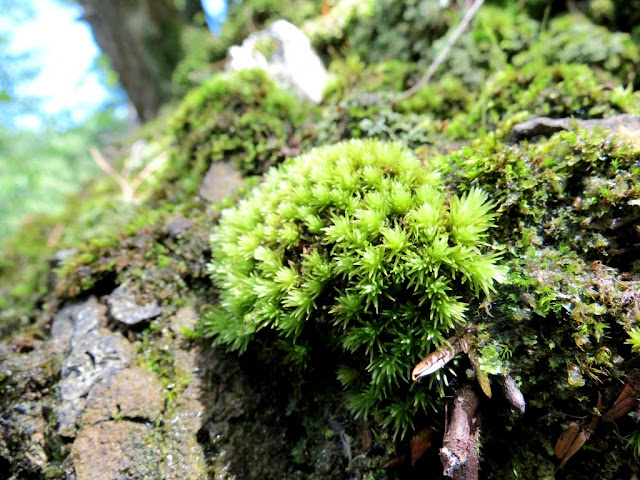 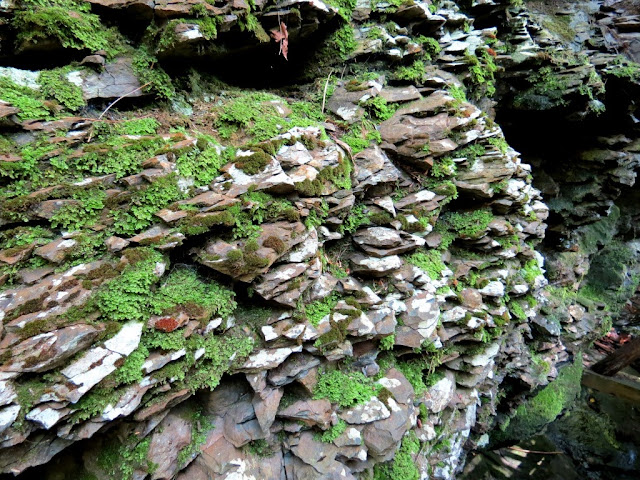 My mom took a couple pictures of me and Zach. In the first I didn't realize he was being goofy so I'm giving the big cheese: 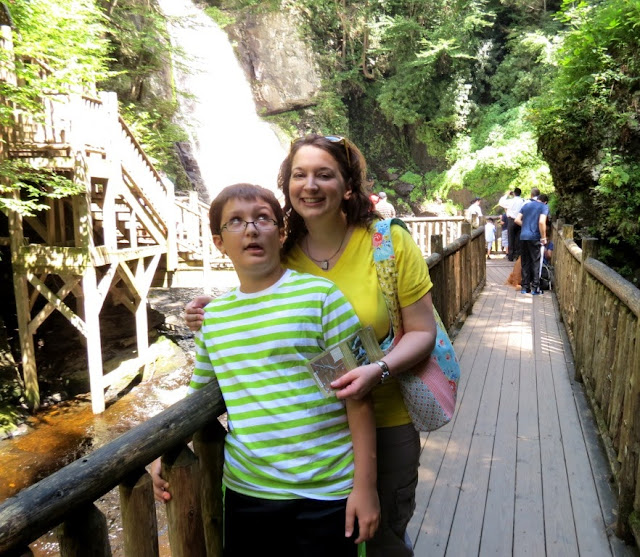 In this one I'm telling him that we need to give very serious faces to the camera as though we aren't having any fun at all. You can see how well that went over-- 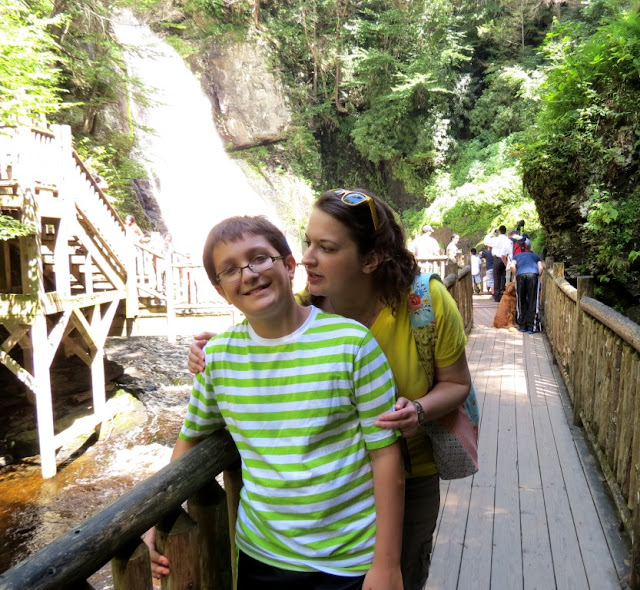 I do like when he thinks he's not being watched and lets his guard down, jumping from rock to rock. 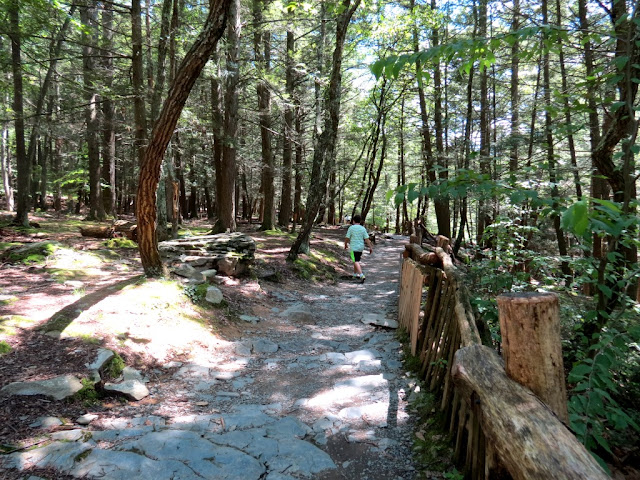 On the way out of the Falls was a paddle boat spot. Rachel, Matt, Zach and I all wanted to go, but Rachel and I did not want to paddle--we fell for that when we were kids and it was not easy, fun, or relaxing. So Matt and Zach sat up front and paddled, and Rachel and I sat in the back and ordered them around. They didn't listen to us, and kept trying to steer into the floating piles of...crap...looking....stuff to try and see what it was but it wouldn't "cooperate" (which was fine with us). 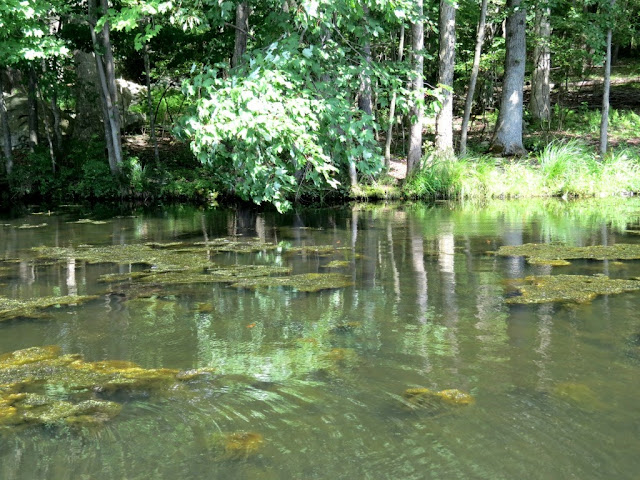 At one point a duck fluttered out of the trees and flew away and I sat there pointing and yelling "A bird! A bird!" like a two year old. When what I really meant to say was "I wish I had seen that sooner so I could have taken a picture." I just simply did not have time to say all that. 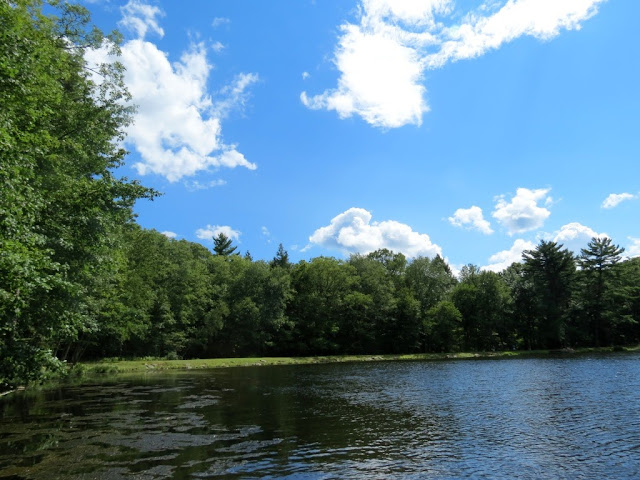 When our time was up they decided to paddle in backwards, because boys will always find a way to make things more interesting to themselves when they think the standard way is too boring. Hey, as long as I didn't have to paddle the thing they could go in any way but upside down for all I care.

We went out to dinner, but my stomach got the wigglies on the twisty mountain roads, so pictures were the furthest thing from my mind. Back at the house we all just retreated to doing our own thing. It was a perfectly perfect mix of doing and not doing, of relaxing, snuggly weather and get up and get going weather. I think an extra day would have been nice, but I always love to come home.
From the convoluted brain of Bethany at 10:00 PM