Please excuse the cheesiness of that title--sometimes it overcomes me and I must type it :) Here in Philadelphia we have a section of the city on  South 4th Street called Fabric Row. It's like a tiny little version of the Garment District in NYC. I've never been there, mostly because I detest driving downtown by myself. Last week my sister Alica asked if I wanted to go as she's been looking for fabric for fall/winter skirts. I'm always looking for fun knits (and never having any luck) so off we went. We scored a jackpot parking space, the day was sunny and beautiful, and we had a mini adventure ahead of us. We started at one end and worked our way to the other, and then came back down the other side of the street. 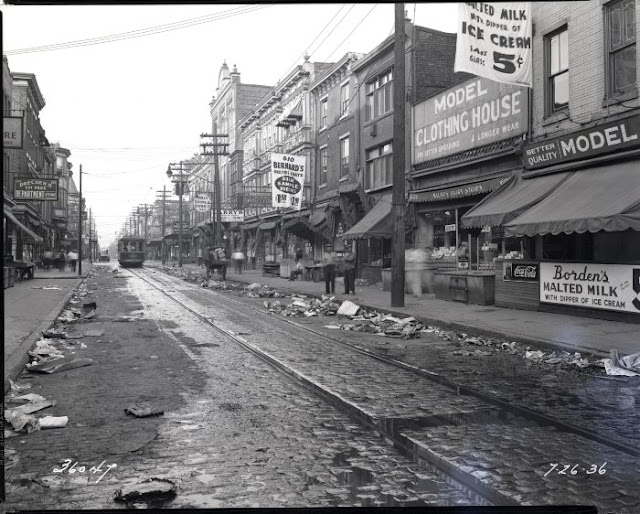 Oops, wrong pic (as though you couldn't tell by the trolley tracks and nickel ice cream).
source 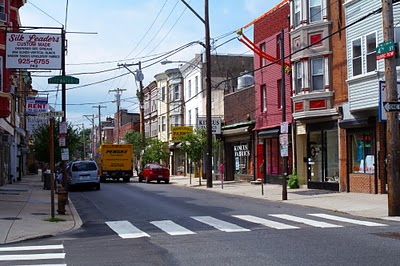 The first place we stopped was the PA Fabric Outlet. We didn't buy anything straight away as we had four blocks of fabric to look at, but on our way back to the car we went back in and made our purchases before stopping for something to eat. 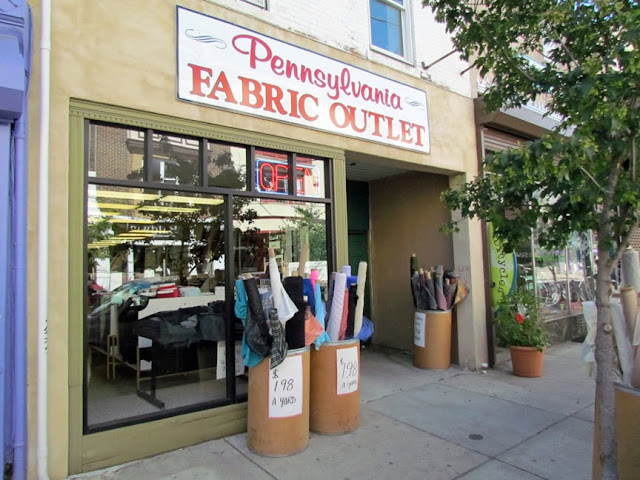 They had a great selection of quilting cottons, apparel fabrics, flashy dress stuff (like dancewear and all kinds of fringe), leather, fur, notions, and so on. I liked that it was clean and orderly--I dislike going in stores where things are stacked and crammed and the good stuff is near the ceiling and you can barely fit in an "aisle." I came away with these two cottons that struck me as being kind of Dutch-folk arty. I'm not sure what I'll use them for, but they were not expensive, so why not? 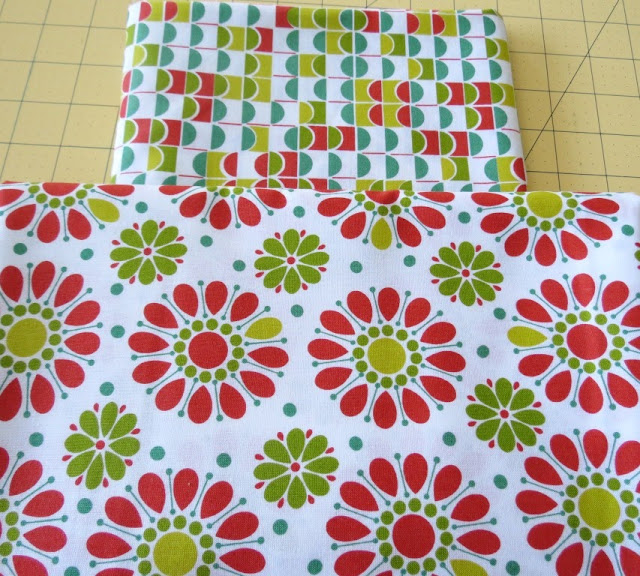 Alicia found the exact kinds of fabric she was looking for to make into skirts--a wool blend and a corduroy that is a bit more green than the picture shows. 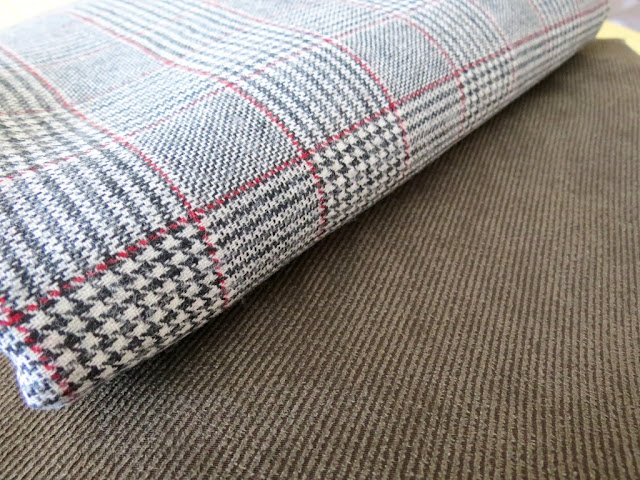 Another place we (or I) did well was at Jack B. Fabrics. They were in a temporary location as their original location was completely destroyed in a fire back in the spring (one so bad a firefighter lost his life), but even this spot was clean and bright, and had very friendly staff. Based on their selection I would love to go back to this place when they're rebuilt and completely restocked. 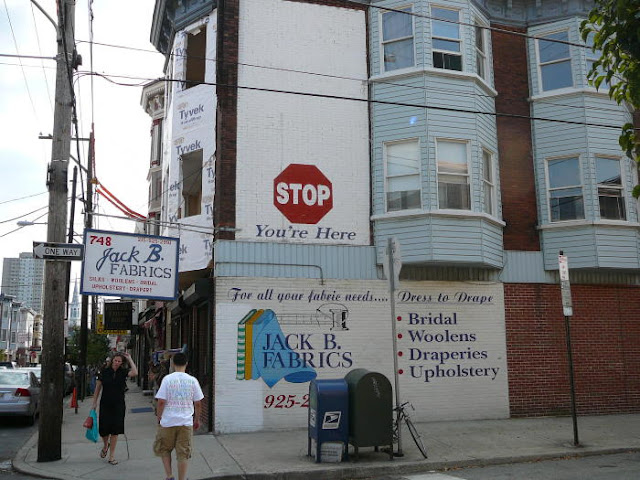 The original site--all that is left right now is a giant hole in the ground. Their temporary site is a little further down the street.
source 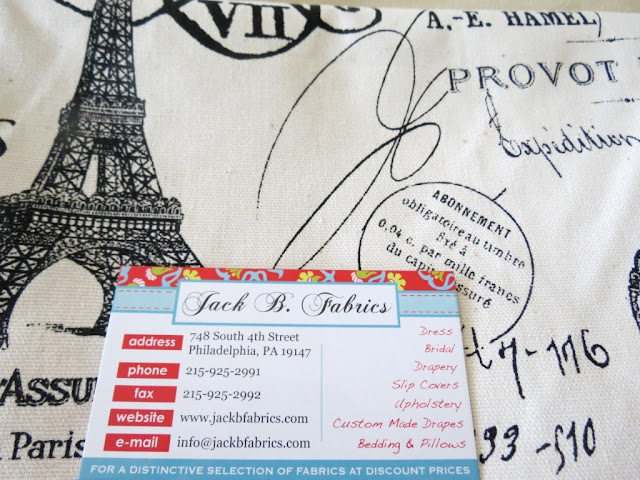 There was an absolute abundance of upholstery and drapery fabric shops. We made short work of those as that wasn't what we were looking for (though it was beautiful stuff). The other apparel shops were of the fancy sort--satins, tulles, shimmery sparkly things that just won't do for the every day. We wound our way down to Maxie's Daughter. 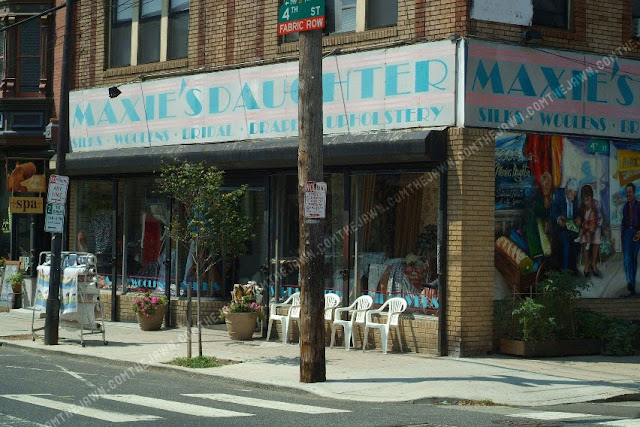 This place had a lot of very nice things, but it was quite crammed. It was one of the only places that we found some knits that weren't for swimwear. They were priced OK, and even though they were in spring/summer colors we bought some anyway (by the time I turn mine into shirts it'll be spring, anyway). Mine are the pink and green cuts, and Alicia's is the floral-- 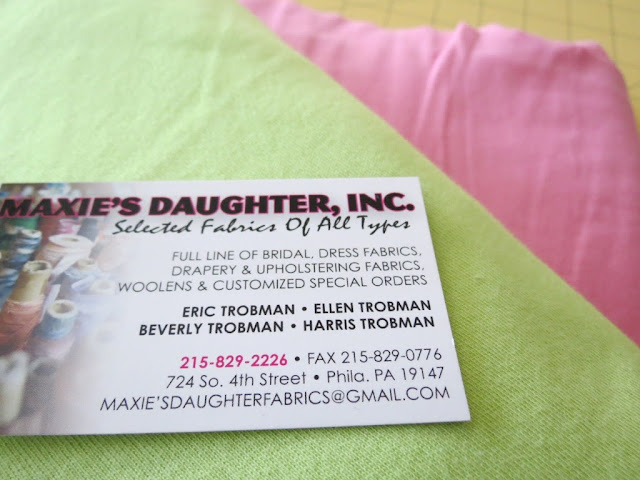 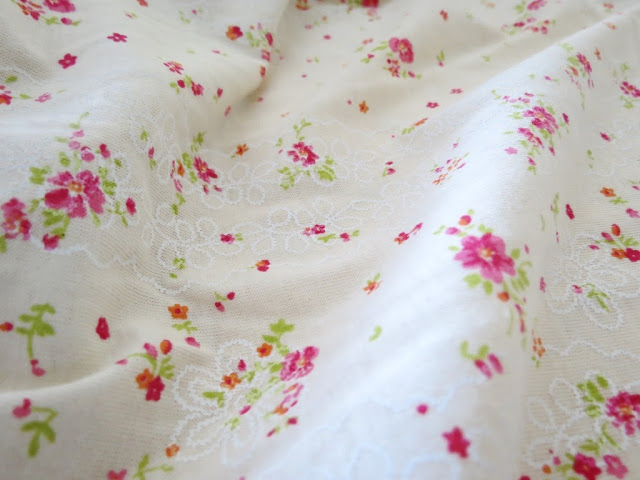 I think we spent more time waiting for our fabrics to be cut than actually shopping, and not because there was a line but because there was hardly any space to cut anything. No matter, really, just an observation--the prices were good and the folks were nice

As we continued down the street we saw Albert Zoll's-- 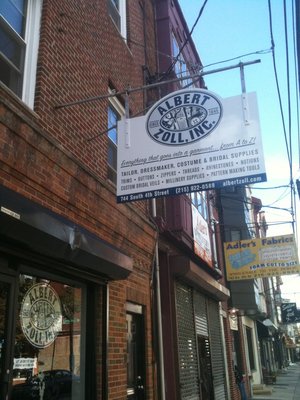 The sign is kind of misleading--they do sell everything you need, except fabric. They had a great notions section, but as I'm a notions fiend I had most of it already (and what I didn't was just a little too pricey to justify how little I know I would use them). I did find a couple things, though. 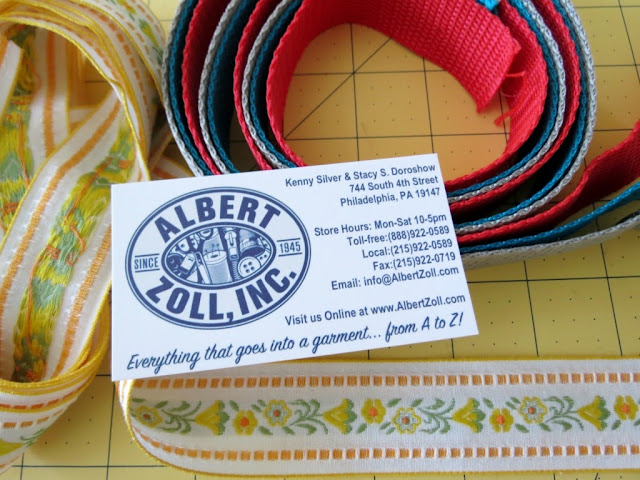 The strapping will be for some key fobs (yay--I found my hardware!) and the trim was just too pretty to pass up.

Overall we were very restrained. Alicia is only buying things that she knows what they will be turned into (she's already dreamed up the garment, just needs the supplies) whereas I didn't have projects in mind but bought things mostly on a whim--naughty, naughty, I know. There weren't as many shops as I thought there'd be, and I certainly didn't think so many would be devoted to home dec stuff. As such, we made our way up and back in about two hours flat. We learned which stores we liked so when we go back we'll know right where to go. It was quite easy to get to (just a few turns once we got off of I-95), and not crowded at all (everyone was probably down the shore).

We popped a few more quarters in the meter, and stopped off for a late lunch at Red Hook Coffee and Tea. We shared a sandwich and then headed home. I thoroughly enjoyed myself. How nice to have such a spot so close by. And to have your sister with you to stop you from any questionable purchases :)
From the convoluted brain of Bethany at 9:00 PM