Though it seems as if we have taken August off (which, I suppose, we have) I have been teaching my sister to sew for a few months with Wednesday evening lessons. We started with hand-sewing basics--how to sew on different kinds of buttons, how to blind stitch a hem, and different ways to sew seams (running stitch, back stitch, whip stitch, and slip stitch, depending on the purpose). She did really well (her blind stitch is truly invisible and perfectly straight--she's quite meticulous). I kept trying to think of things to teach her to avoid the inevitable--helping her sew a garment. I can certainly put a garment together--it's the fit that has always stymied me. But what better way to learn than to teach someone else? Two heads are better than one, and someone unrestrained by the "rules" can sometimes come up with a perfectly good solution that works just as well as what "they" say you should do. 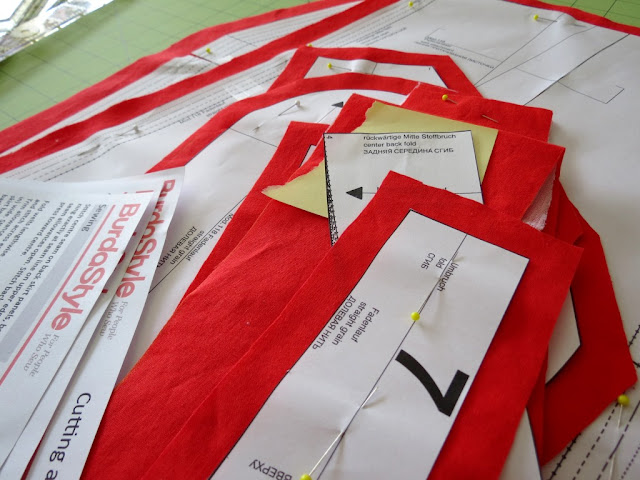 It came as absolutely no surprise to me that the "only" thing she could find that she wanted to sew was a Burda pattern. I had used one of their patterns before and was quite successful (she still wears that skirt), but that was a beginner pattern. She chose intermediate, from the Burda Style magazine. We got one page of print directions and the pattern pieces. So we took it step by step. We cut, we traced, we added seam allowances, we enlarged it just a touch, one bit at a time. The fabric was a very inexpensive cotton in a great shade of red called Poppy (I'm a fan of learning cheap and spending more as your skills improve). This skirt certainly won't be one that lasts forever, but it's gotten several outings and still looks great (especially considering it's her first project).

She wanted this skirt for a specific event, so we worked on it for three days straight at the beginning of July. It was a total mental marathon. The pictures aren't great as certain colors are hard to photograph, especially as solids. So here it is: 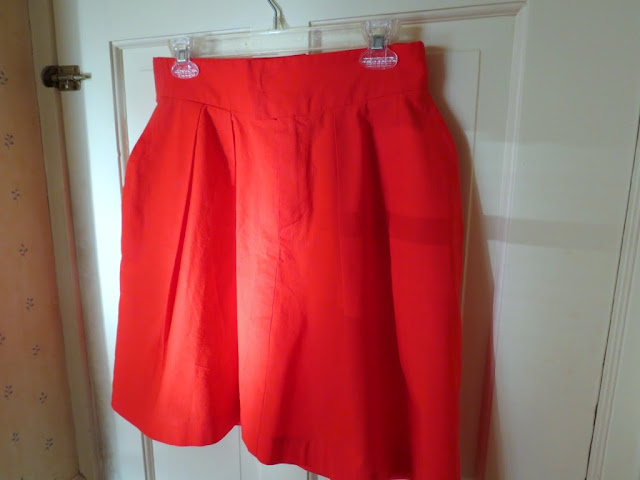 The front. It looks quite simple, but there are a lot of details to it, many new to me (or only done once years ago--they may as well have been new). Thank heavens I've amassed a nice little stack of sewing books that pertain to garments--they came in quite handy. 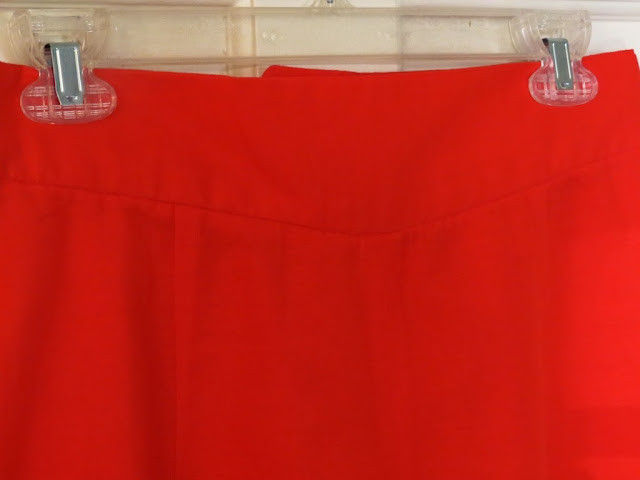 It's difficult to see them but there are a few darts in there. My sisters had jokingly referred to my wheel tracer as a pizza cutter in the past--she finally realized what it was for and thought it was pretty nifty to trace pattern markings with it. The waistband is also slightly shaped--which meant we had to be precise as there was no "Oh we can just move that over a little" that could happen to correct for anything. 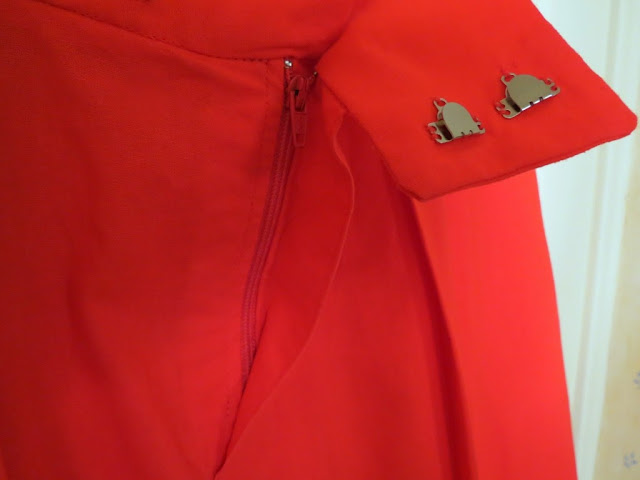 Pleats in the front--four of them. And a fly front. That fly front stopped me cold. The directions were useless, and the books I had weren't a great help. I found a few tutorials online and they worked a treat. In retrospect we should have interfaced the fly as the fabric isn't that sturdy, but that's a note for the future. Otherwise, once we knew what we were doing it flew along. The lapped waistband was no problem (the fly front hiccupped the seam line a little bit but it gets covered by the overlapping band so it's no biggie). 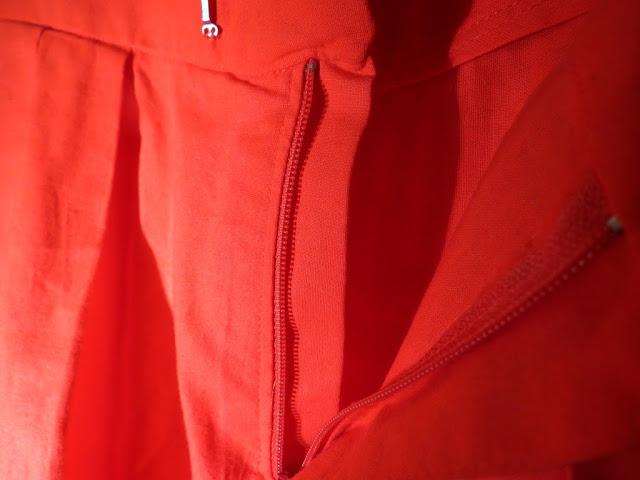 I don't like using the word 'fly.' I think it sounds vulgar. Which is interesting coming from me--I could put sailors, longshoremen, and gangsta rappers to shame with some of the things I say. The pattern refers to that piece that comes out to the right of the zipper as the fly guard. That makes me snicker. 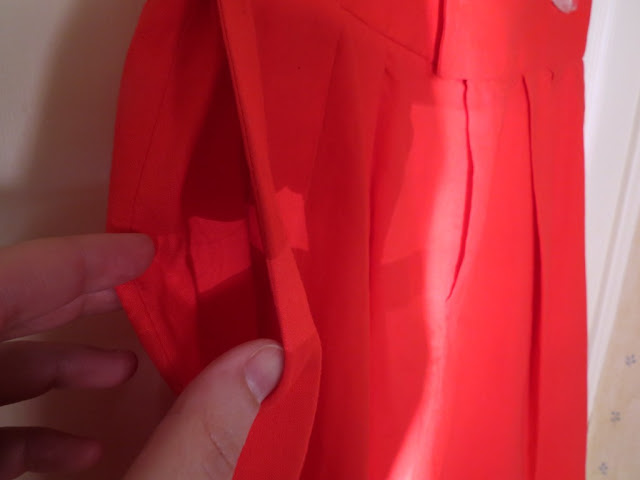 I've also never done side pockets. Again, the directions made no sense so I turned to Google. We made it work, but they're not quite right. As I've never done them I couldn't visualize them at all and what was supposed to happen. We finally rigged a way to get them in, and called it a night. About ten minutes after my head hit the pillow I slapped my head and almost yelled "That's it!" Unfortunately, we had to trim the pockets to make our way work, so their way now would not. But I was pleased to get that flash of inspiration, late or not. I really want her to make this skirt again so we can give those pockets another crack. 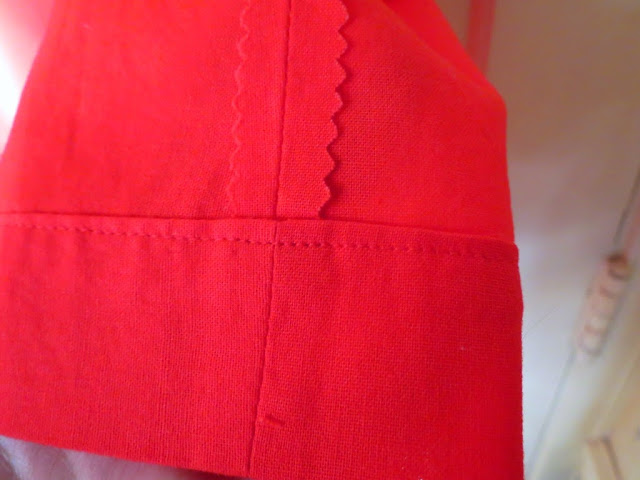 I didn't want to haul out my serger to teach her to use that as well (as I haven't used it in ages and could use a refresher course myself) so she pinked all the seams. 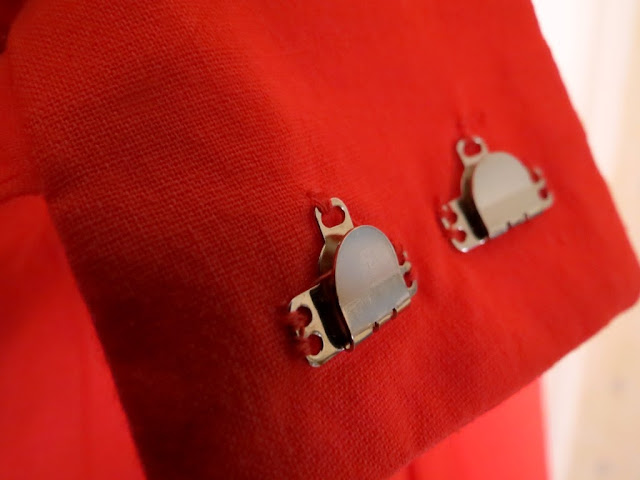 The pattern called for a button closure, but she didn't want that (she's quite simple in her style--tailored and detailed, but simple and understated--I think she'd do very well in France :)
So we went for hook-and-eye closures that can't be seen. This was the final step in the process. It was a few hours before her event, she was losing steam, I was standing there telling her "No! We are finishing this! We've come this far--come on!"  She said "I feel like I'm on Project Runway and I'm down to the wire!"

After the sewing was done she pressed it nice and neat. It looked like she was pressing a shop-bought item (in a good way--it looked really neat and nicely done, like she paid much more than the few bucks the fabric cost). I went off to church with my mom and she got ready for her party. She texted me a pic of herself wearing it--it looked great. I'll have to take her pic the next time she has it on so you can really see how good it looks. 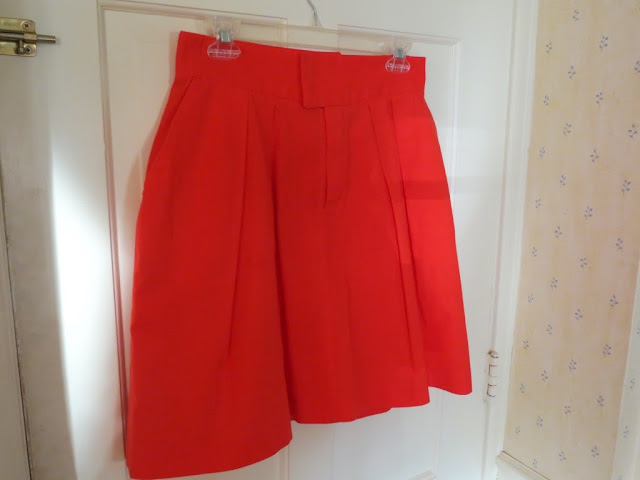 You can see the pleats, the fly front and the lapped waistband much better in this pic.

I can't help but bragging to people about it when we're together and she wears it.Whether they sew or not, I tell them it's her first project, and here are the things she did: darts, pleats, fly front, side pockets, and a lapped waistband. We modified the hem so she could maintain her dignity :) and modified the pockets out of ignorance (but it's not something anyone would ever notice, just like the rest of the teeny kinks that only we know about). My first project was a tee-shirt that was immediately relegated to my pajama drawer. Her first project is a great looking skirt that she can wear proudly in public. I'm so proud of her! And I guess myself, a little bit...I learned a few things, too. I am now quite afraid for what she comes up with next. But hey, I like to learn and enjoy a challenge, so bring it, sister!
From the convoluted brain of Bethany at 11:11 PM