If you follow me on Facebook you may know that on Friday afternoon I had a certain bit of stitching whirring through the washing machine and then tumbling around the dryer to crinkle up. Yes, my dears, it is the quilt that I have been going on and on...and on...about for a long time. It all started when Katy posted that she had lost interest in finishing a Sherbet Pips quilt she had started, and was offering the bits (a quilt in progress and a jelly roll) up to a good home. So they came to live here. I had most of the quilt top done in short order. But then it sat because I just couldn't get my act together to cut some squares out of a jelly roll she sent. Yes, laying down strips and cutting in one direction is apparently hard work. But at some point at the beginning of the month, my motivation came out of hiding and I have been tackling a ton of projects, most notably this one. 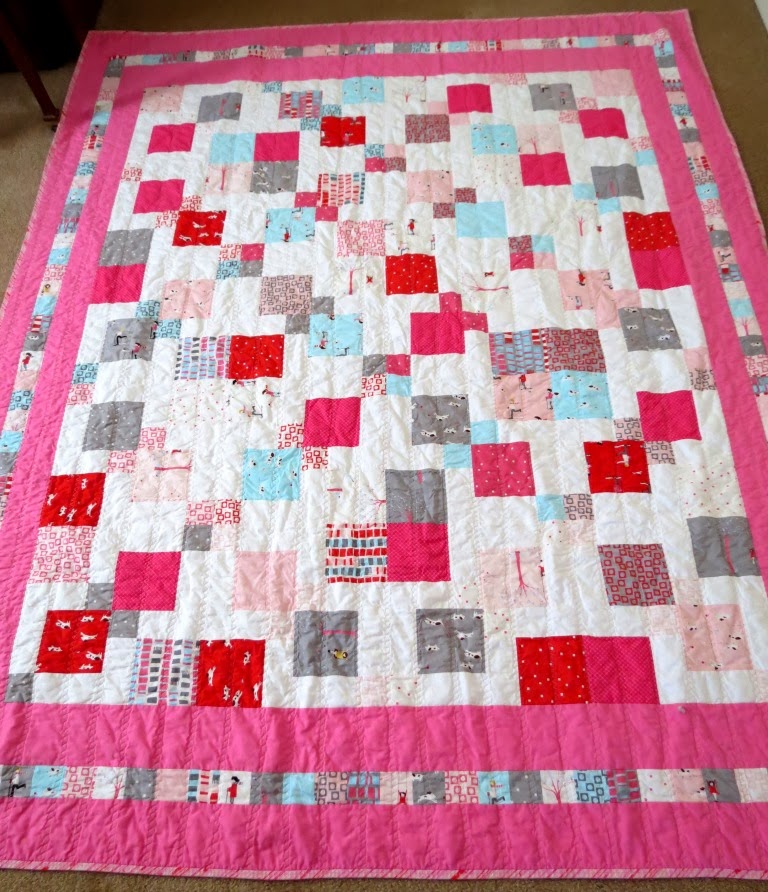 The pattern itself is very easy--a disappearing nine-patch. Easy cutting and sewing with a very interesting result that doesn't look like what it starts out as. Throw in a few borders (if you want) and you've got yourself a quilt top.  The center part inside the pink borders came to me in progress and with the other blocks all cut and ready so it was very easy to stitch up. I struggled with a good border color but went with pink in the end as the center had a lot of white (though gray could have been nice as well). 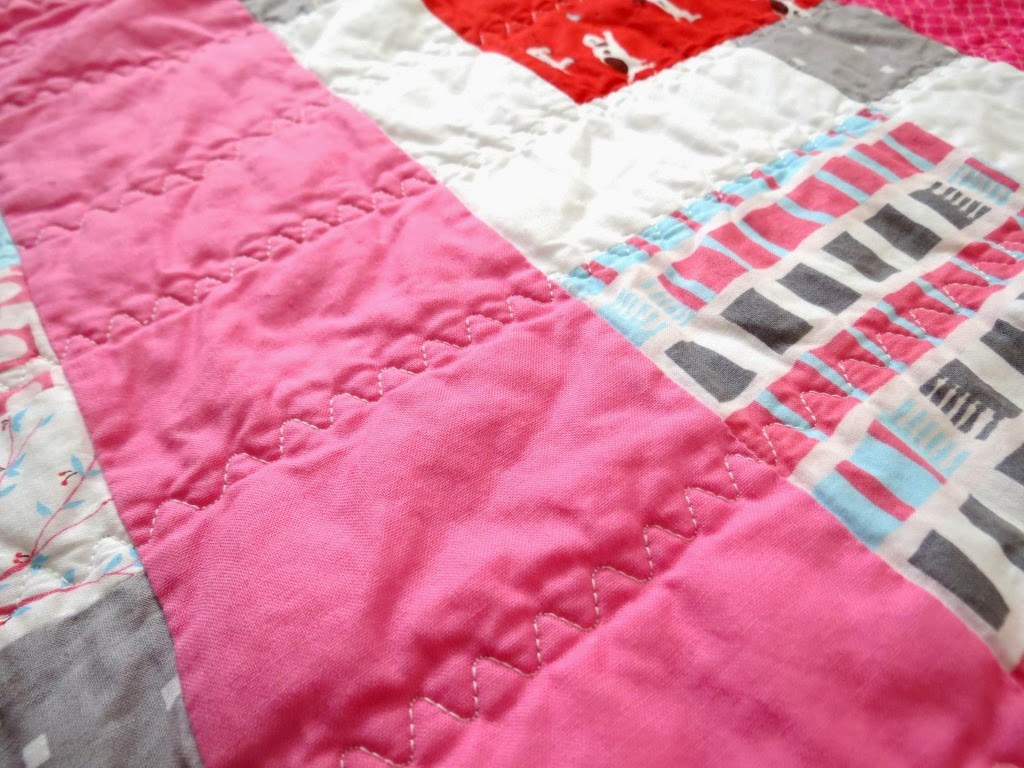 I really wanted to do a long wavy sort of stitch that could almost loosely mimic free motion quilting, but of all the stitches my machine has it lacks that one. So I went with the one above. It reminds me of cupcake holders--nice and crinkly looking. This quilt finished at a twin size and is the largest I have ever made. As such, I really had a time quilting this one (it is quite heavy). But I managed and I love it. 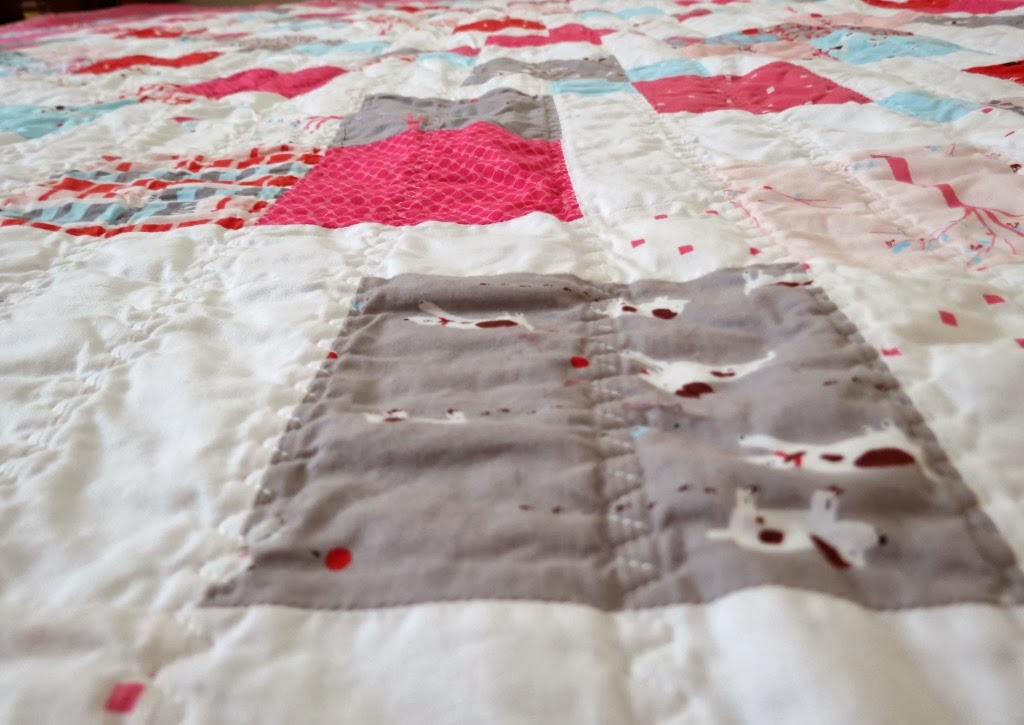 I wanted to go only in one direction with the quilting. The quilt is full of squares, and to my eye the squiggly stitch softens it a bit. I didn't want to add another square element to it if I didn't have to. I used Warm and White batting, and was curious about how it must be stitched. I checked out their site, and as long as your stitching is ten inches apart in any one direction it's OK. So one direction it was. 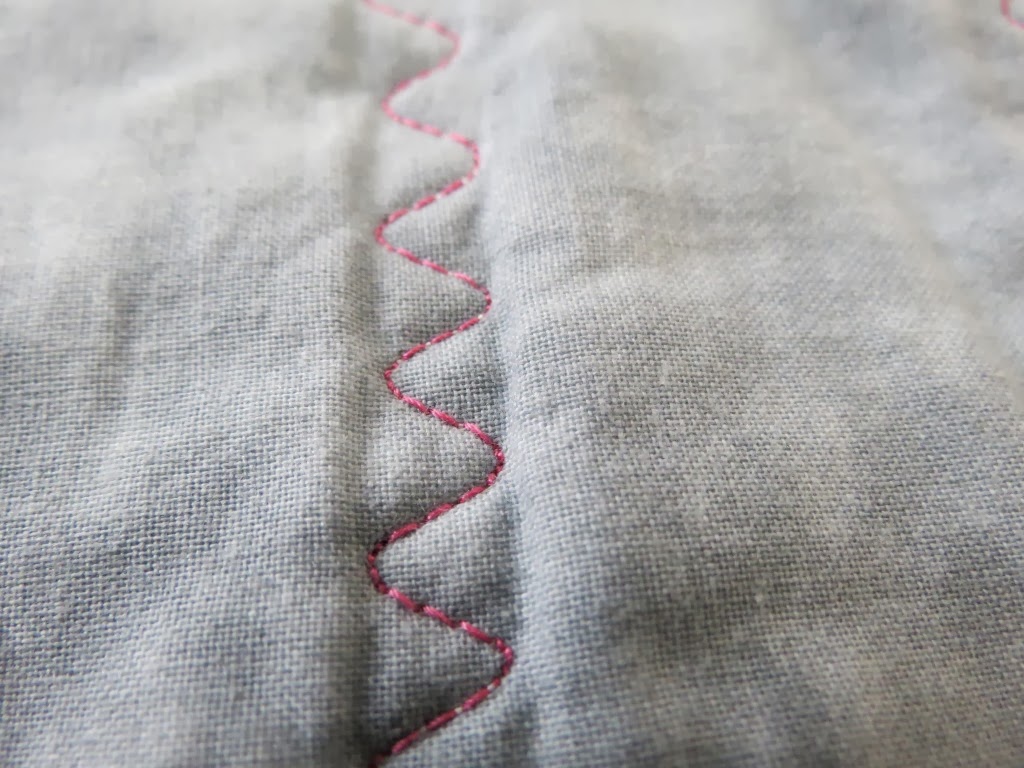 I went with a tonal gray for the backing. I had always thought this quilt would have a gray backing, but it seemed to always be the color that was out of stock. I had visions that the stitching would be pink (even though it'd only be on the back) and was kind of irked it might not happen. I ended up buying plain white at Joann's, but when I laid it out to baste it the fabric was riddled with flaws. I returned it and had another look online, and lucky me they had gray in stock. It's like it was meant to be--it was there when I was ready for it and not a moment sooner. 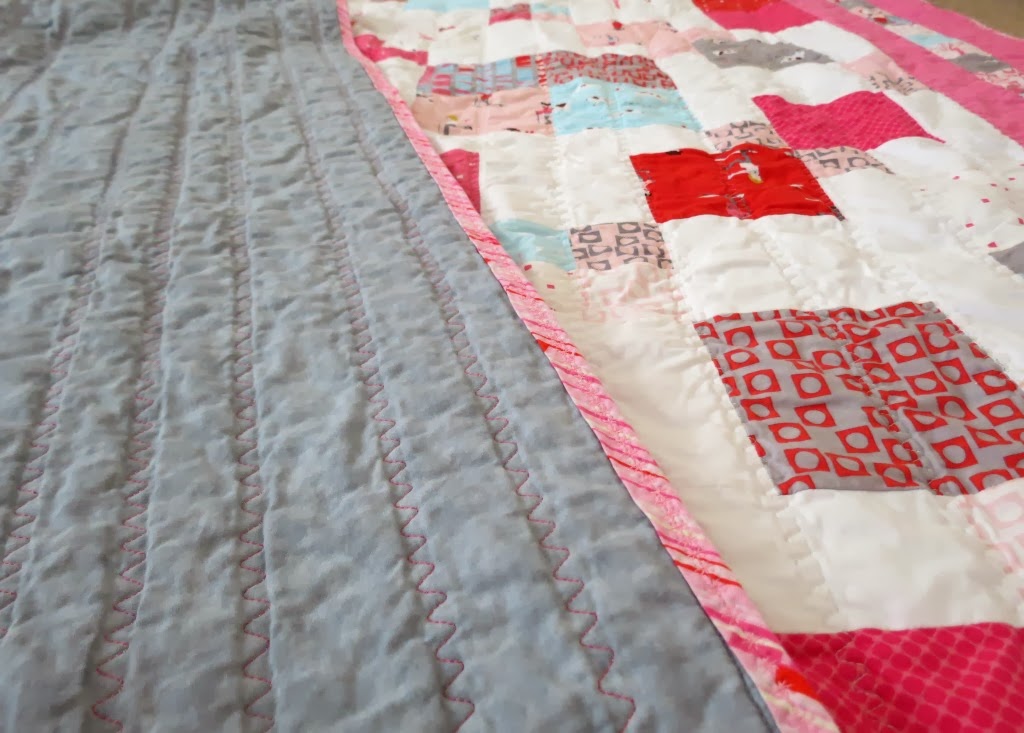 There are a few teensy puckers in the back that formed in the instances I was force-feeding the quilt through (and stopped when I chillaxed a bit). But with the stitching and the crinkling you have to look pretty hard to see them. This stitch was a bit beastly to pick out, so unless it was really bad I left it in as the picking was more frustrating than the pucker.

Let's discuss the binding. I was struggling with choosing something for that as well. But a few months ago I won a giveaway and one of the things I chose was a yard of the perfect binding fabric for this project. Stripes, pink, and red. Yes, yes, yes! I made it up before I even had the quilt basted, because if I didn't have this ready to go it would have sat for another six months. 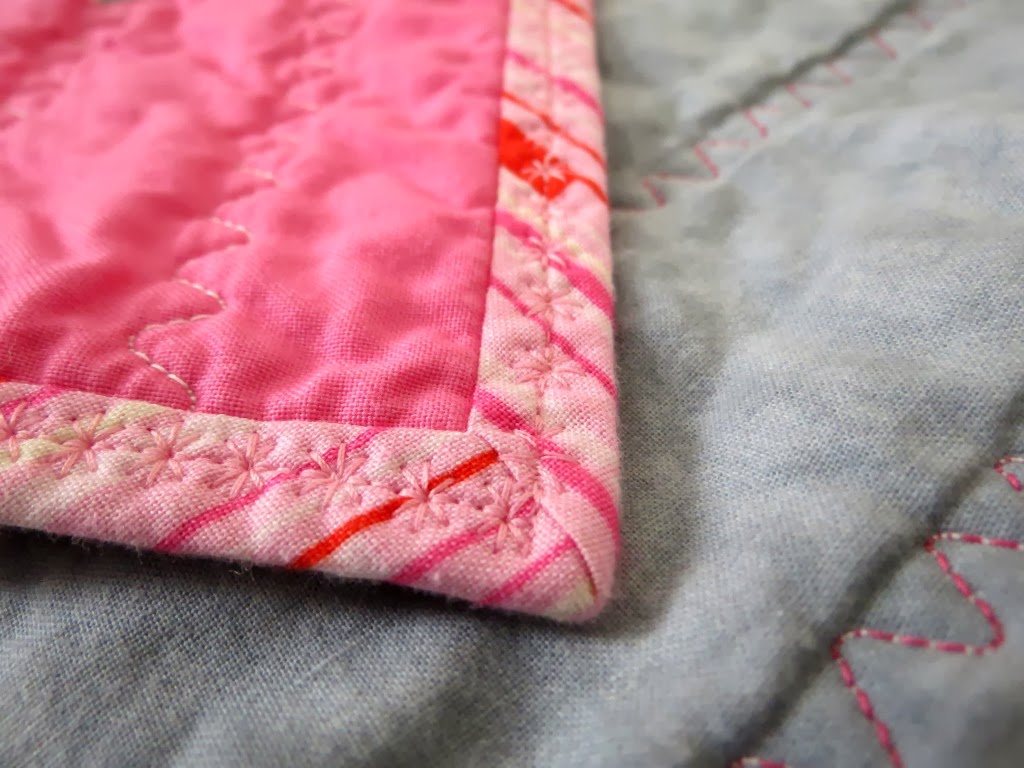 There was no way in anywhere I was hand-stitching this binding, but my machine binding never really looks as nice as I'd like it to as straight stitching can be so unforgiving. I've always loved that little asterisk stitch as it reminds me of a snowflake, so that's what I used. I had not a single issue, which has never ever happened. No puckering, no veering off course, none of that. I think it might be my favorite part. 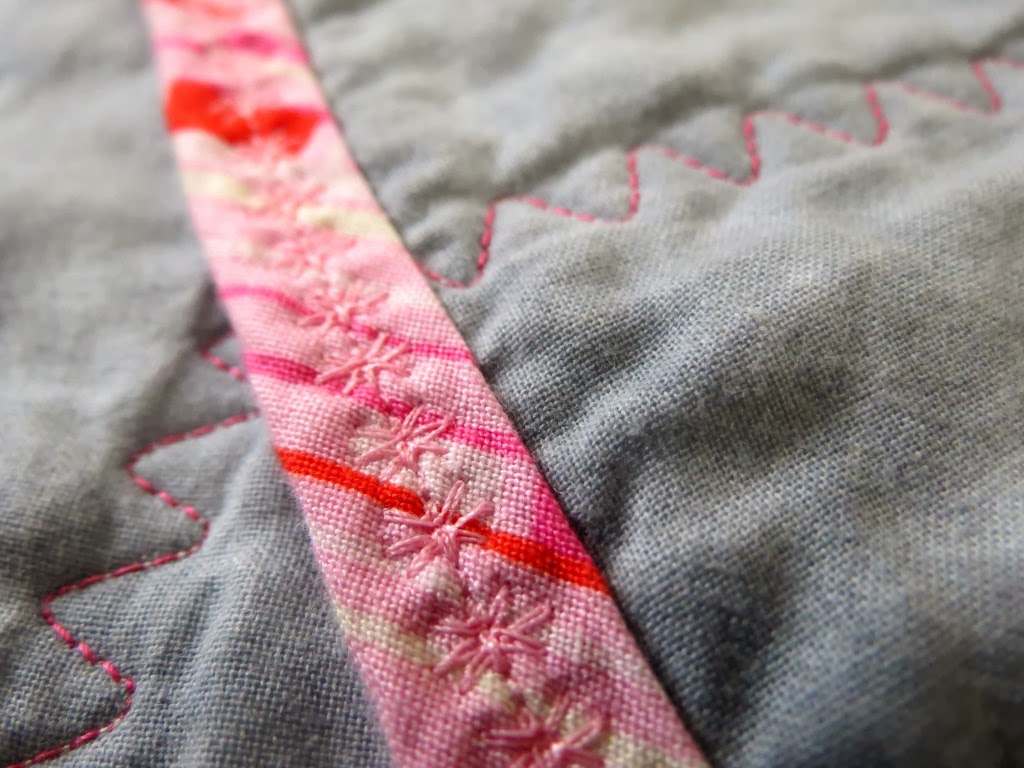 My main issue with binding is that the back never seems to catch like the front and gets some funkiness to it. This stitch kept that from happening, especially since I pressed it and clipped it in place before I stitched it. It took a long time but it was worth it. 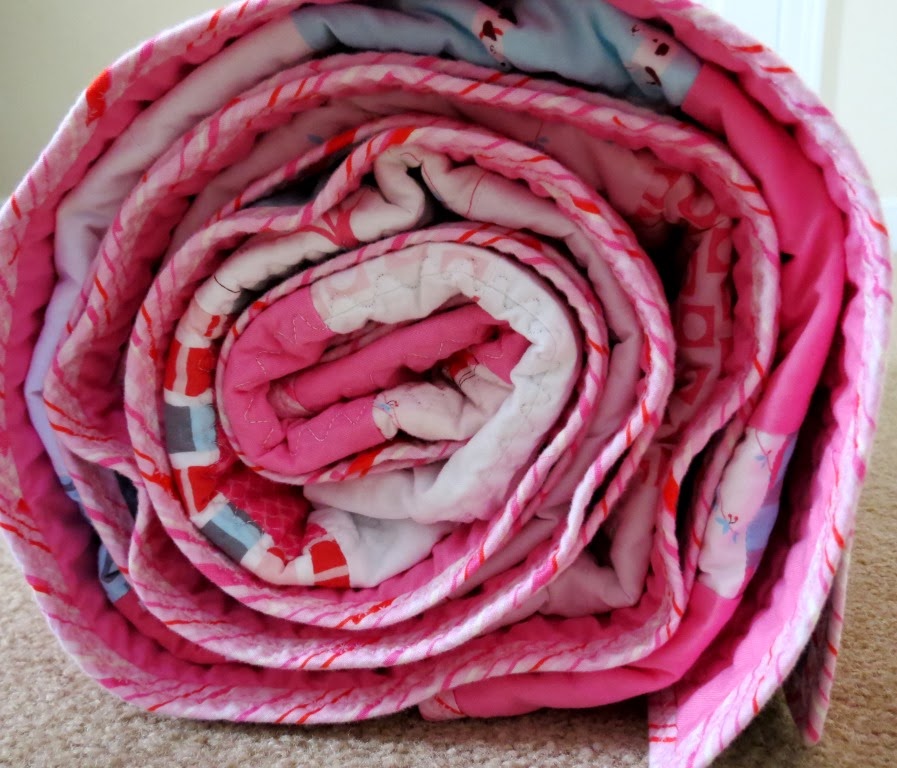 When I look at this quilt I can't believe it took me as long as it did. Everything about it is quite simple, but sometimes the simple things get hung up because I'll think "Oh, I can breeze through that whenever I want" but whenever doesn't come and things don't move forward. I also tend to get hung up on things being perfect instead of just...being themselves. This quilt was made my inner child (whose name is Rosie, by the way)--the pinks, the wavy lines that aren't evenly spaced because I wanted lines straight down the centers of the pink border pieces (and because it was all eyeballed), the snowflakey binding, the puckers on the back that don't count because they won't be seen, all of it. Once I moved forward with it I had fun doing it and the work zipped along, especially when I didn't obsess over a crooked stitch or ten. 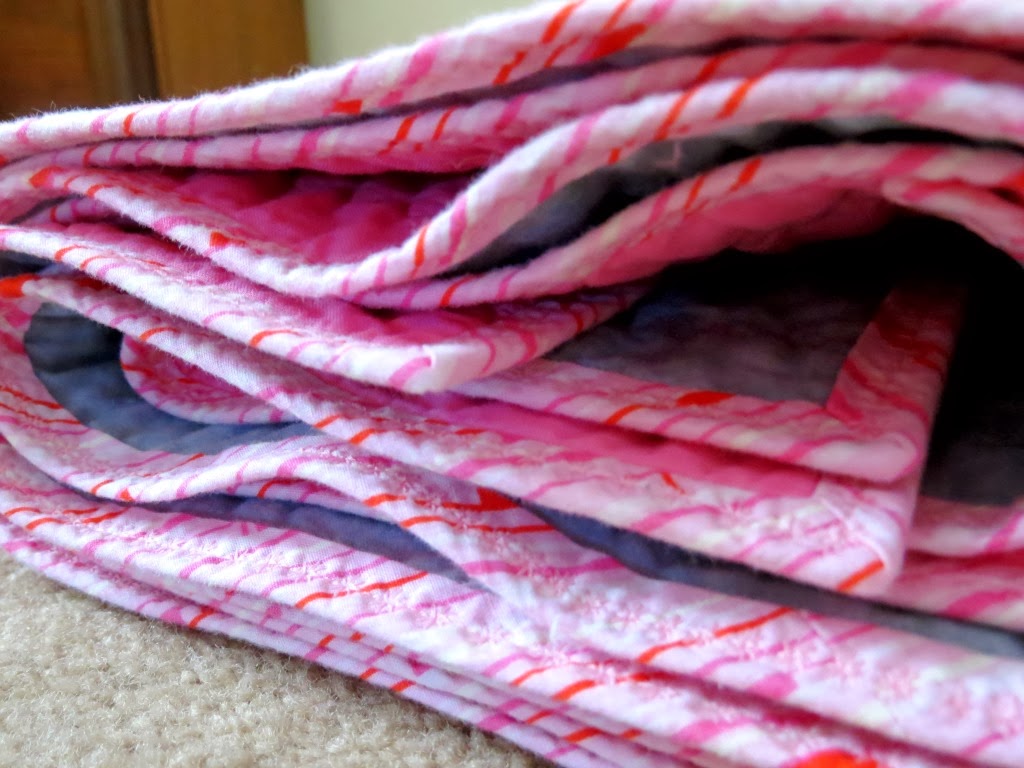 I always get 'yelled' at when I say there are mistakes in something. But I don't say it in a woe-is-me way or in a please-praise-me-anyway manner, but because so often online you see nothing but perfection. Fabulous pictures, perfect stitching, not a hair our of place if you will. I've found that can hold people back--"I'll never be able to do that so why try?" seems to be the mentality. Try because you want to. Try knowing that nothing is perfect, and embrace the imperfections as perfect in their own way. Life is so much easier when we cut ourselves a little slack. So no, I don't make perfect quilts. I don't know if I'd want to. Because then you get into "I can't use it because it'll get messed up." See what a vicious cycle perfection can be? Break that cycle--sew a pucker, stitch a little crooked, chop off a point, and snuggle under your beautiful creation that is the only one like it. 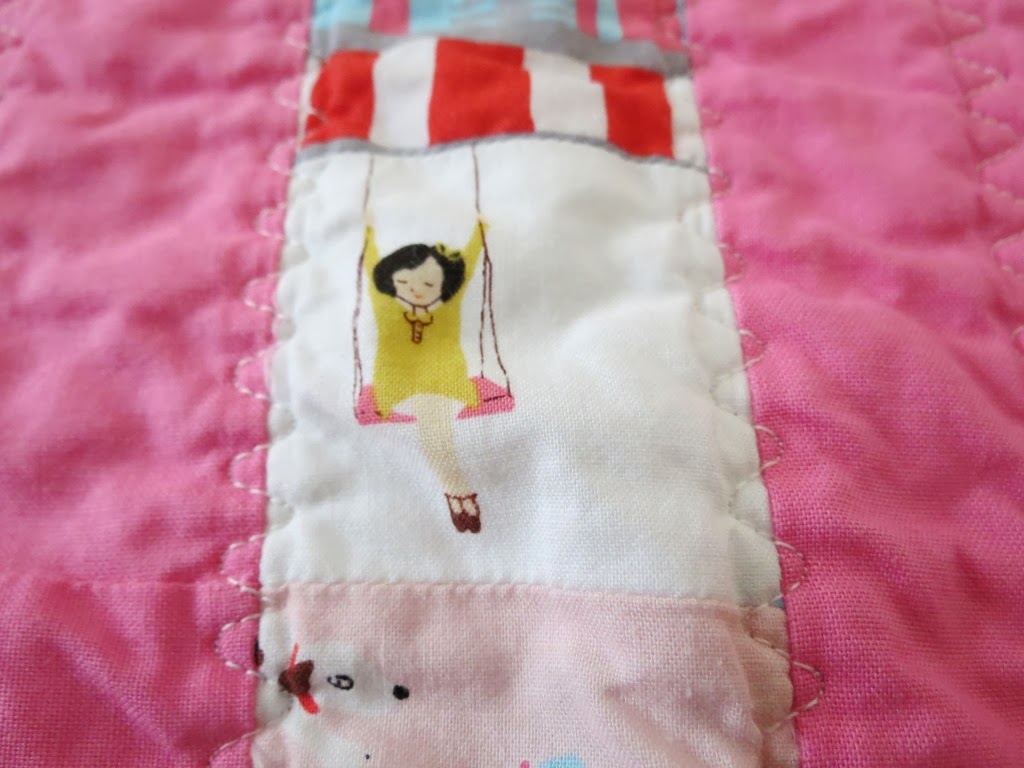 This was finished just in time. That little girl in the pic above may have been swinging free and easy yesterday, but today she was snuggled under this quilt as it plummeted to the twenties from nowhere. Unfortunately I'll have to crawl out from under the covers to go to work, but it's a short work week so I think I'll be able to survive. Have a happy Monday, chickens!