A One Handed Manicurist Did Not Make These Flowers

So here's something. Last night I had a dream. I rarely remember my dreams but this one I did and felt the need to share it with everyone today. Not just you everyone...everyone everyone.

In this dream, I fell madly head over heels in love with a one-handed manicurist. I remember he had a daughter whose mother was not in the picture, and she was about eight, and he was an excellent father. This is all I remember, other than knowing that we had fallen madly in love after only knowing each other for a day (you know how you just know things in dreams? Like "It didn't look like Grandma's house in my dream but I knew that's what it was supposed to be?"). I'd love to know the symbolism of the (quite ironic) one-handed manicurist that I fell for. It was so intense I woke up feeling like it had actually happened, and had a bit of a "Wait....whaaat?" moment while becoming fully awake. Anyone have a dream book?

OK, so I do have something to share with you that I made. I have just been wildly fascinated by this dream for some reason. On Saturday I woke up and decided I was going to see just how many colorful bits of yarn I could turn into maybelle flowers. Do you ever get that urge that you just have to do that thing right then and there, even though it is not necessary or important in any capacity other than making your heart a little glad? That was how it was, and once I started I could not stop until I had an even dozen. 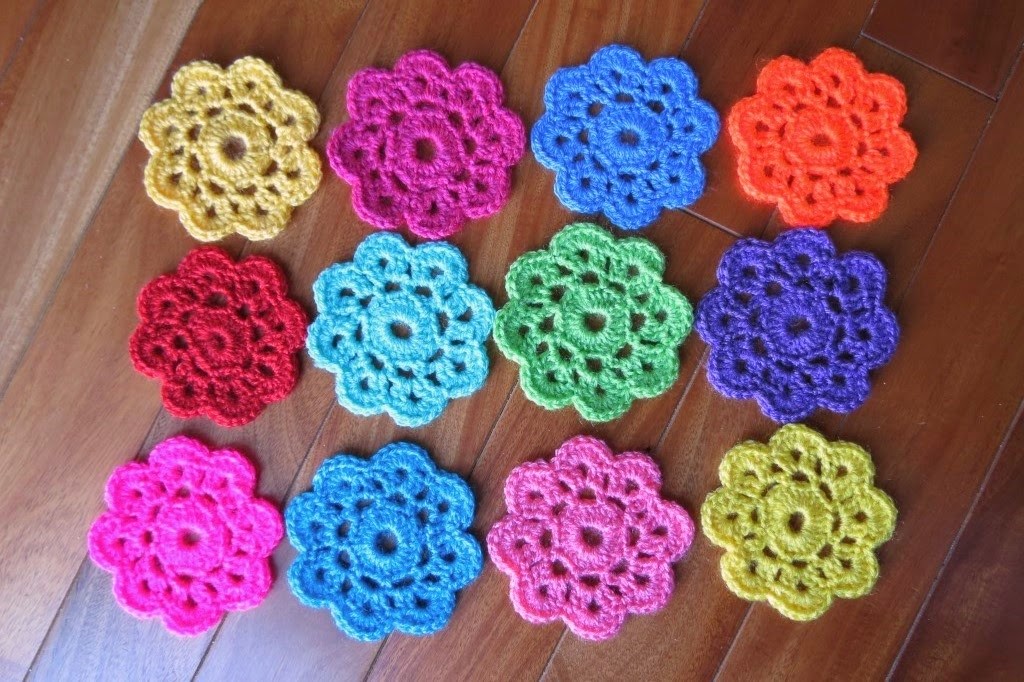 I used some leftover bits of Stylecraft and what was left of my bon-bons after making these flowers. These have got to be some of the most addictive bits I have ever made. Ever. I kept telling myself "Just one more and I'll get on with the day" but I could just not stop. I think I know what crack addicts feel like but y'know, on a smaller scale and in a healthier way. So maybe not so much like that... 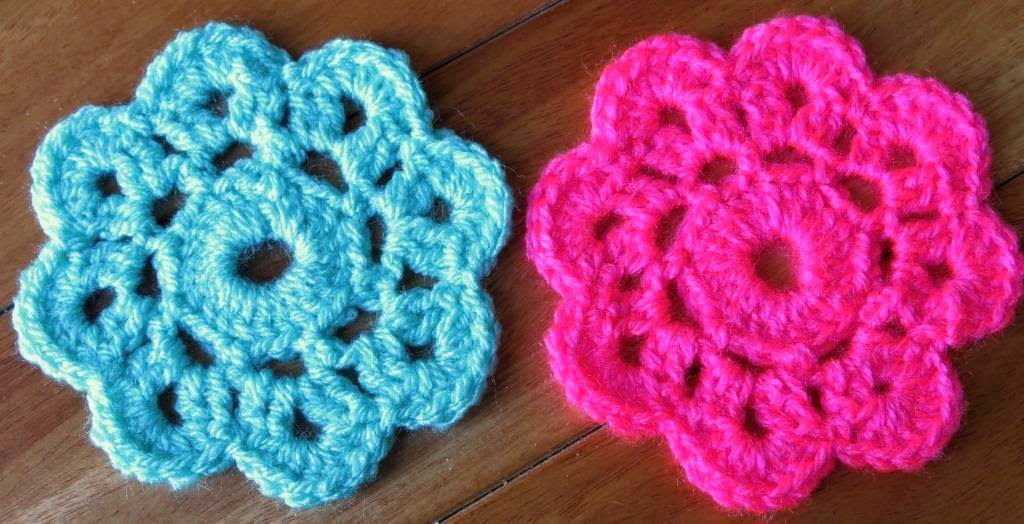 The one on the left (above) I had to make oh-so-slightly different. I was determined to have a flower in that color (it's more aqua than the picture allows for) but I ran out of yarn with just a wee bit left. I had to frog and then tweak the number of stitches a little bit. I made it, but just barely. You can't even tell the difference in the pattern between the two. Good to know should such emergencies arise again. 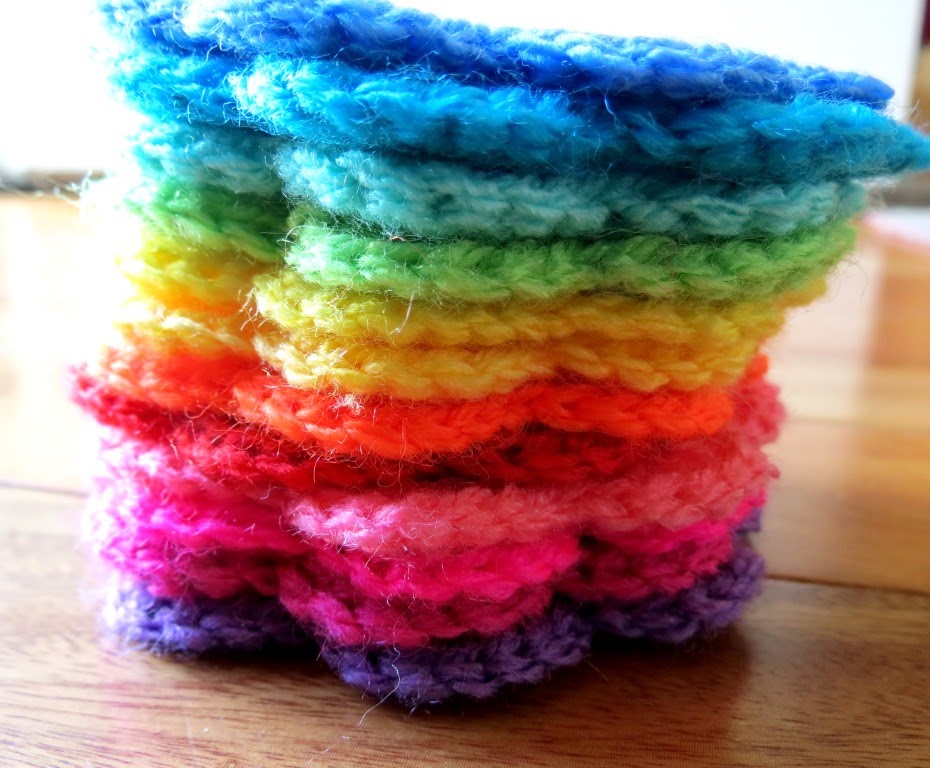 I chained a length of yarn and strung these up on it to make a garland. I tacked it up over my closet doors to add a pop of color. I dig it big time. I have no picture, but I'm sure you can imagine these in a line. 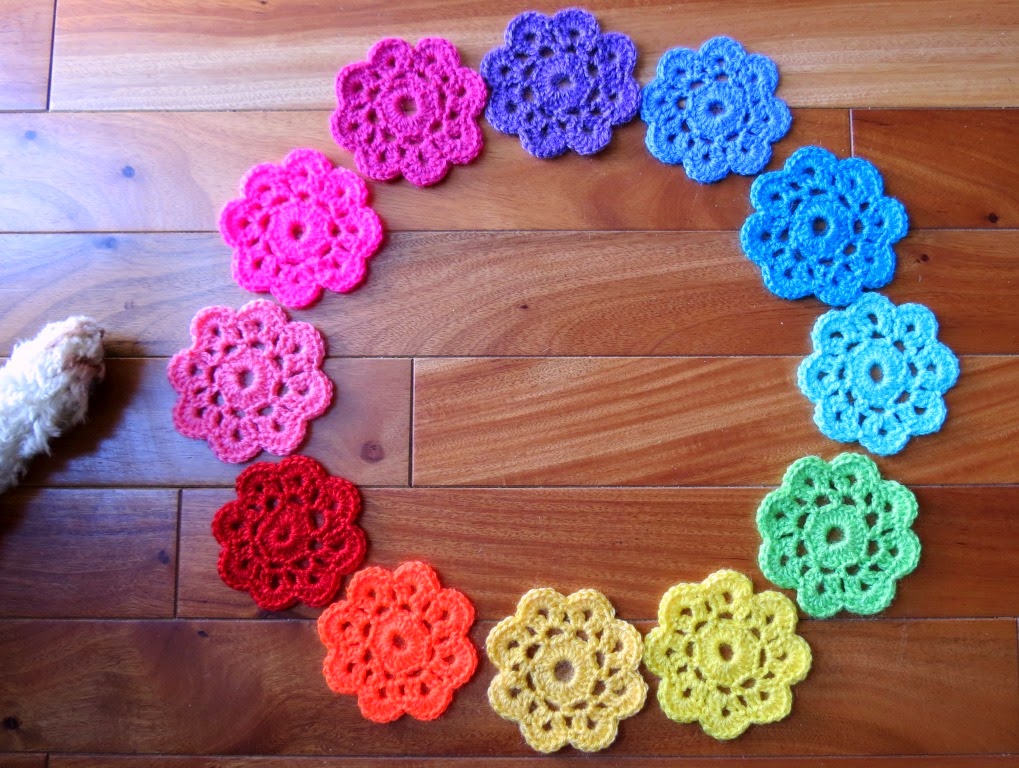 I'm including this picture (and leaving Charlie's paw in) for two reasons. Number one: a wreath of rainbow flowers? OK. It reminds me of this project (still one of my favorites ever). And number two: to show you (as though this proves it) that the dog only has any sort of interest in me when I lay things out to photograph. He will ignore me sunrise to sunset, but if I lay something out for a picture, he is sniffing it, pawing it, laying on it, sitting next to it, and so on.

I've got one more project to share with you. All I'm going to say is I don't know how so many people all those years ago made so many doilies without having to be committed somewhere.
From the convoluted brain of Bethany at 10:21 PM